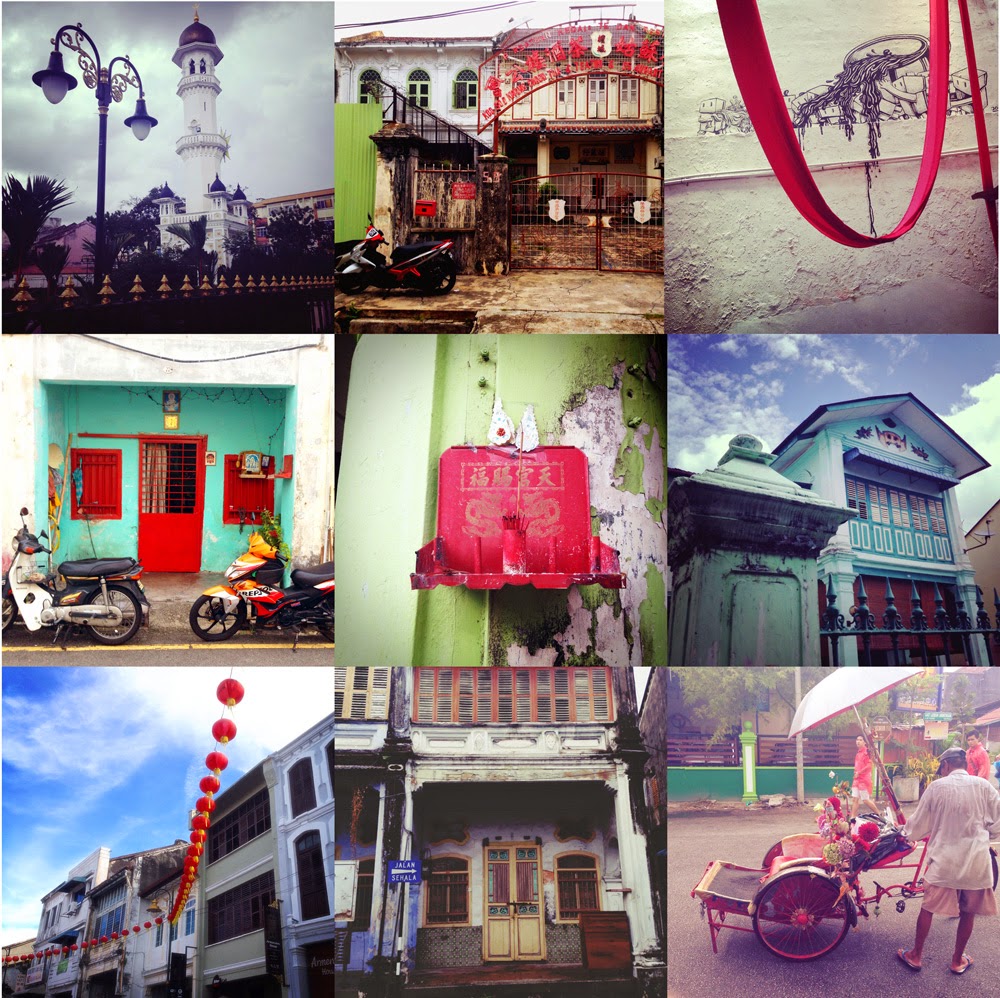 Penang is a café lover’s paradise. There were more amazing places here than I could frequent in my few short days, but I have a feeling that I saw some of Georgetown’s best. I started with Nomadic Note’s Guide tocafes of Penang, but when I could not find some of them, I dodged into others. A word of caution, many cafes open late (noon or later) and close early (five or six). Some are not open on Sundays or Mondays. Plan accordingly.

Mugshot
The most famous and iconic of the Georgetown cafes. An expat favorite. Who wouldn’t feel inspired to write in the sunlit courtyard of  a colonial house with green shutters? Mugshot also makes excellent crispy bagel sandwiches, and thick tart homemade yogurt. 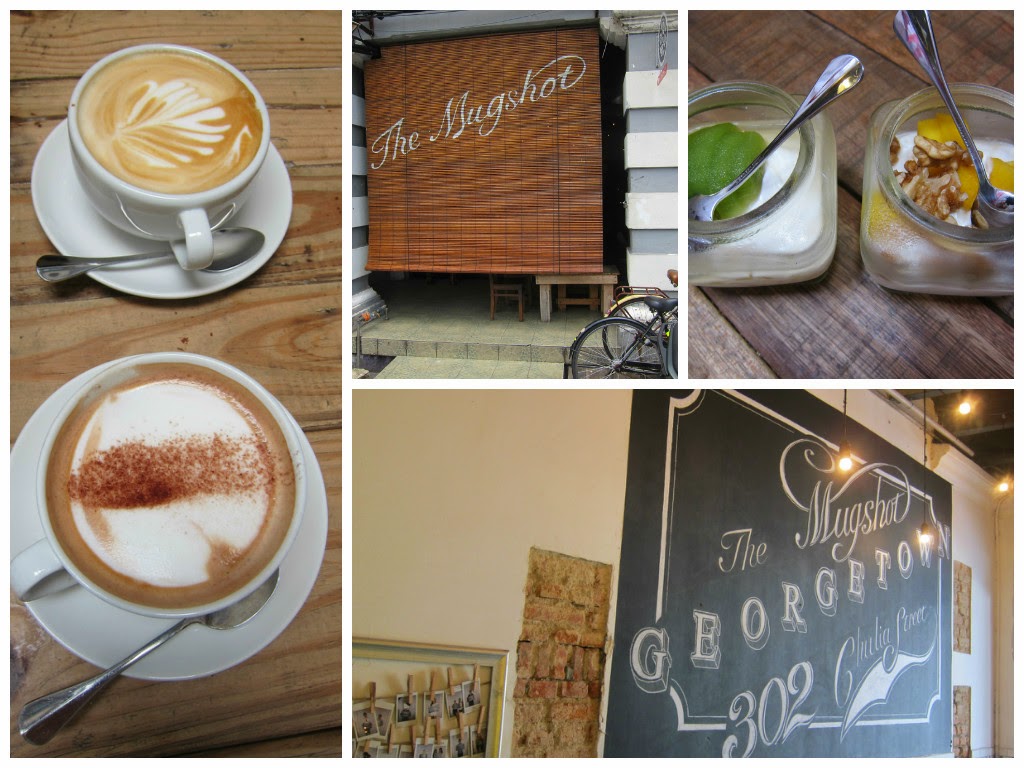 Sugar Honey
Excellent drink selection. I ordered an iced Rose Latte, and my partner had a fantastic Green Tea latte. Their seats were very comfortable and conducive to working. 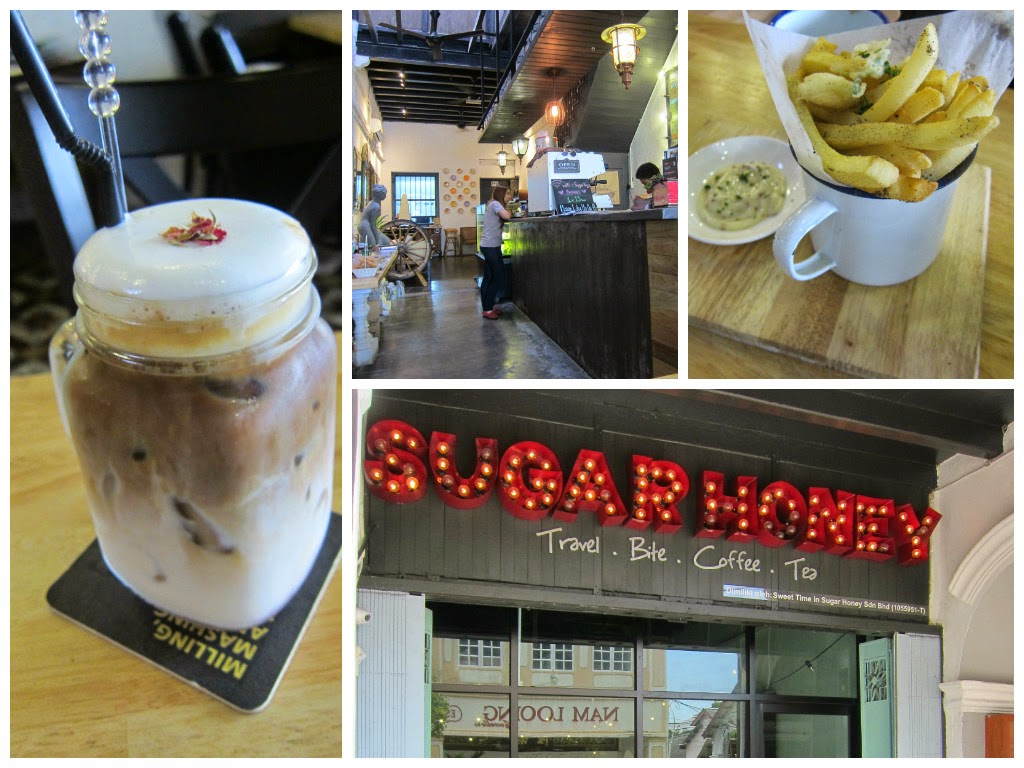 Twelve Cups
Another great green tea latte can be found here. This place is very clean and generic, but it provided a great little refuge from an afternoon storm. 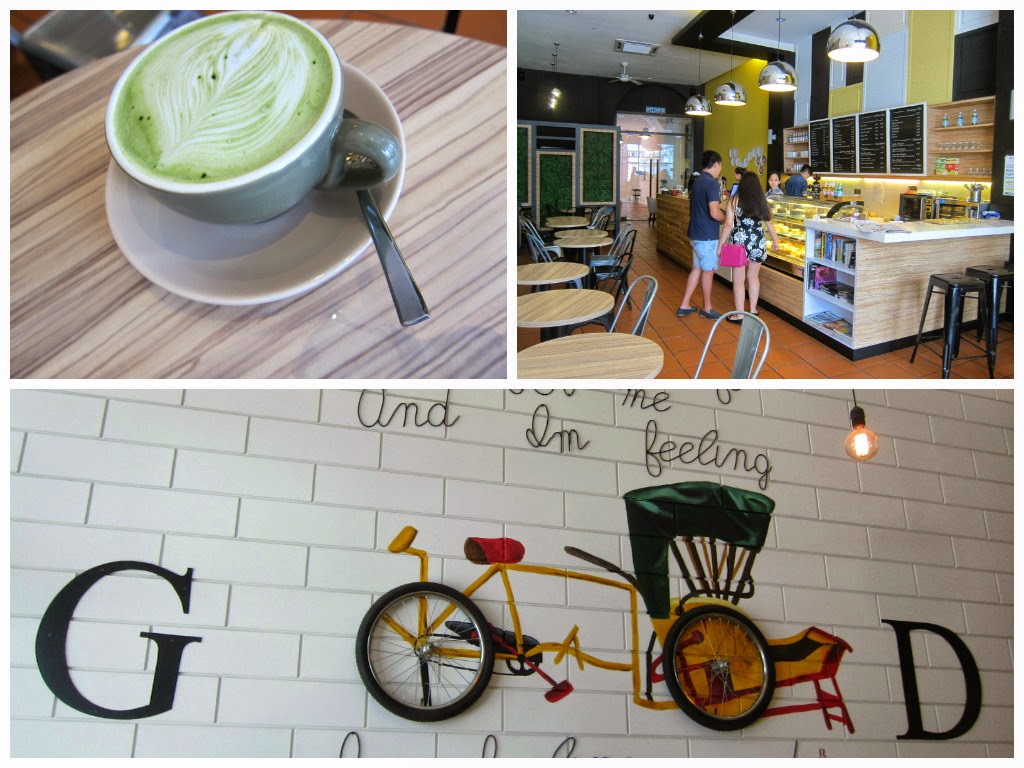 The Alley
Here is another place I happened upon during my walks through Georgetown. When we entered entire staff greeted us. I don’t think anyone who worked there was over twenty years old. The place had a real quirky youth art vibe. 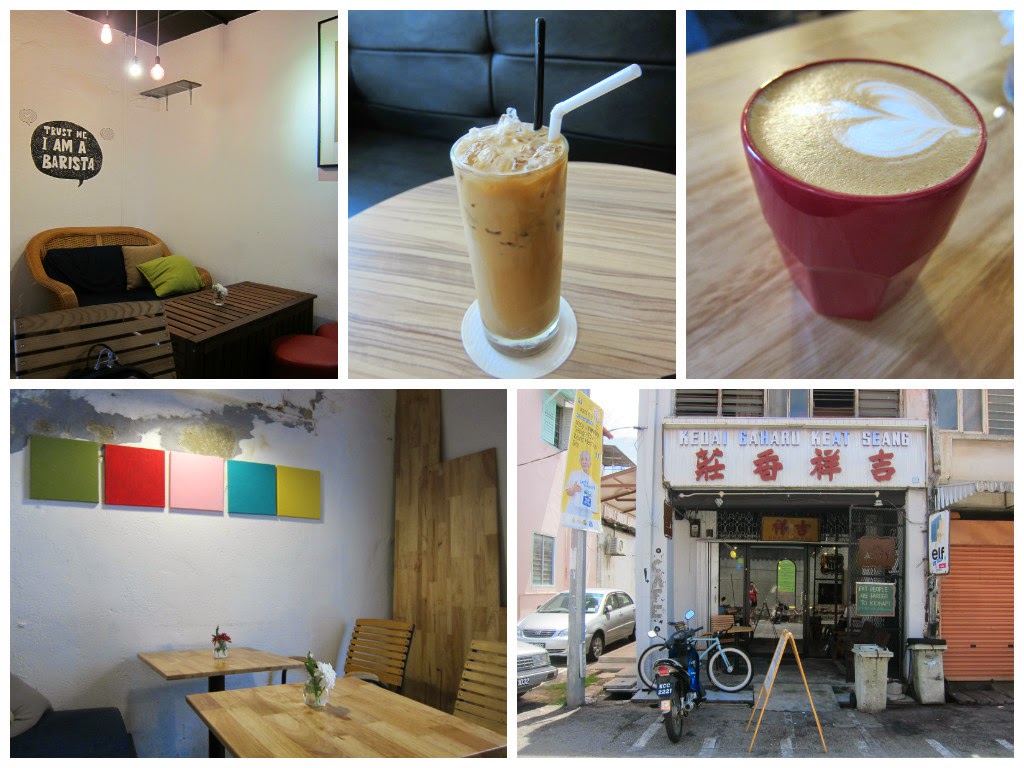 Bus From Kuala Lumpur to Penang


The train from Kuala Lumpur to Penang was sold out for the day I wanted to leave, so I decided to make the journey by bus. The bus had many advantages. Unlike the train, which would leave at 3:00 pm and arrive in Butterworth station at 10:00 pm, the bus leaves nearly every hour. I could ride it in the morning and check into the hotel at a reasonable hour. It also takes less time, only 4.5 hours, as opposed to the train, which takes 7 hours. I heard that the bus rides were comfortable with AC and even wifi. It was also possible to book them a day in advance, or even right before travel (though I don’t like to leave things to the last minute). Unfortunately, my bus ride with Alisan Buses was not what we expected.

The night before I went to Puduraya Bus Terminal and bought my ticket from the Alisan counter. There were many scalpers trying to sell tickets at the elevators but I ignored them and proceeded straight to the ticket counter on the top floor. I booked directly at the Alisa counter. At 38 ringits, it was less than I expected.The bus was scheduled to leave at 10:45 the next morning.

I arrived at the platform at 10:30. The bus rolled up right at 10:45 and by 11:04 we departed. Things seem to go smoothly, until the AC kicked out and it because miserably hot. The windows couldn’t be opened, so after only a few minutes, I was literally dripping sweat onto the seat cushion. I didn’t even want to lean back into my seat because my back was so wet with sweat. At 11:45 we stopped at the Batu Caves, not the touristy side, but an unremarkable dirt road with nothing around. The bus driver said we would take “a 15 minute break.” I wondered why we needed a break when we weren’t even an hour outside of KL, but I was hoping they would fix the AC. We disembarked the bus, hoping to find a bathroom or a drink stand, but there was nothing but car lots and temples. When I circled the block, I saw the bus turned around and was driving away!

I ran behind the bus, it was moving slowly so I could catch up with it. After 10 minutes of following the bus, it stopped near a gas station. I used the bathroom and got back on. The AC still didn’t work and it was even hotter in the afternoon sun. 20 minutes passed. More people got on. The bus then drove back to the point where it dropped us off, and more people got on. All but one. We were missing someone. The bus started circling the block, looking for the missing person. And the AC was still out. After nearly an hour of this slow painful drive, the bus pulled in front of a McDonalds and the driver told everyone to get out “for 30 minutes.” He offered no explanation but I figured they were going to look for the missing guy and fix the AC. That was 12:45, two hours after we departed the bus terminal in Kuala Lumpur.

I should have been mad. I should been worried. But somehow I focused on the positive: At McDonalds, we are indoors, shielded from sunlight, mosquitos, and smog. We have AC and I was able to dry my sweaty body. We are sitting at a table with chairs. There are free bathrooms with toilet paper and soap and working hand drivers (that’s more than I can say for the vast majority of bathroom in KL). There’s food (and it’s sanitary at that). There’s even wifi. At least we are not squatting on the dirty ground outside in the heat.
We are at a McDonalds.
That’s the positive.
The negatives is that  we were at that McDonald’s for 4  hours.
Eventually we got back on the now freezing cold bus and made it to Penang. Just after 10:00 pm. Cruelly, it was the same time I would have arrived by train.

Before my trip to Borneo, I googled cemeteries in Kuching. Some very impressive images of colorful Chinese armchair graves came up, and I decided that I had to see them in real life. However, none of the websites with these impressive photographs could tell me the name or location of the cemetery. I resorted to searching Google Maps, which directed me to several cemeteries a good hour’s drive outside the city. Not really what I wanted.

I had all but given up on finding cemeteries in Kuching, when an act of serendipity lead me to this site. I had taken a taxi from the river to a café on Jalan Tun Ahmad Zaidi Adruce, and when I looked out the window I saw the tips of tombstones in a gravesite at the intersection of Jalan Tun Ahmad Zaidi Adruce and Jala Nanas. This cemetery looked more western with grey tombstones, but I figured it was at least worth a look. I decided to walk there on my way back from the café, about 1.5 km. But when I couldn’t find a crosswalk I turned the corner and went up a different road. Along that road I found a much larger and more beautiful cemetery with….armchair graves! I was so excited. I didn’t have to venture out of Kuching to find a beautiful cemetery.

For those who are interested, the cemetery can be found on Jalan Tun Abang Haji Openg, just opposite the Hospital Umum Sarawak. 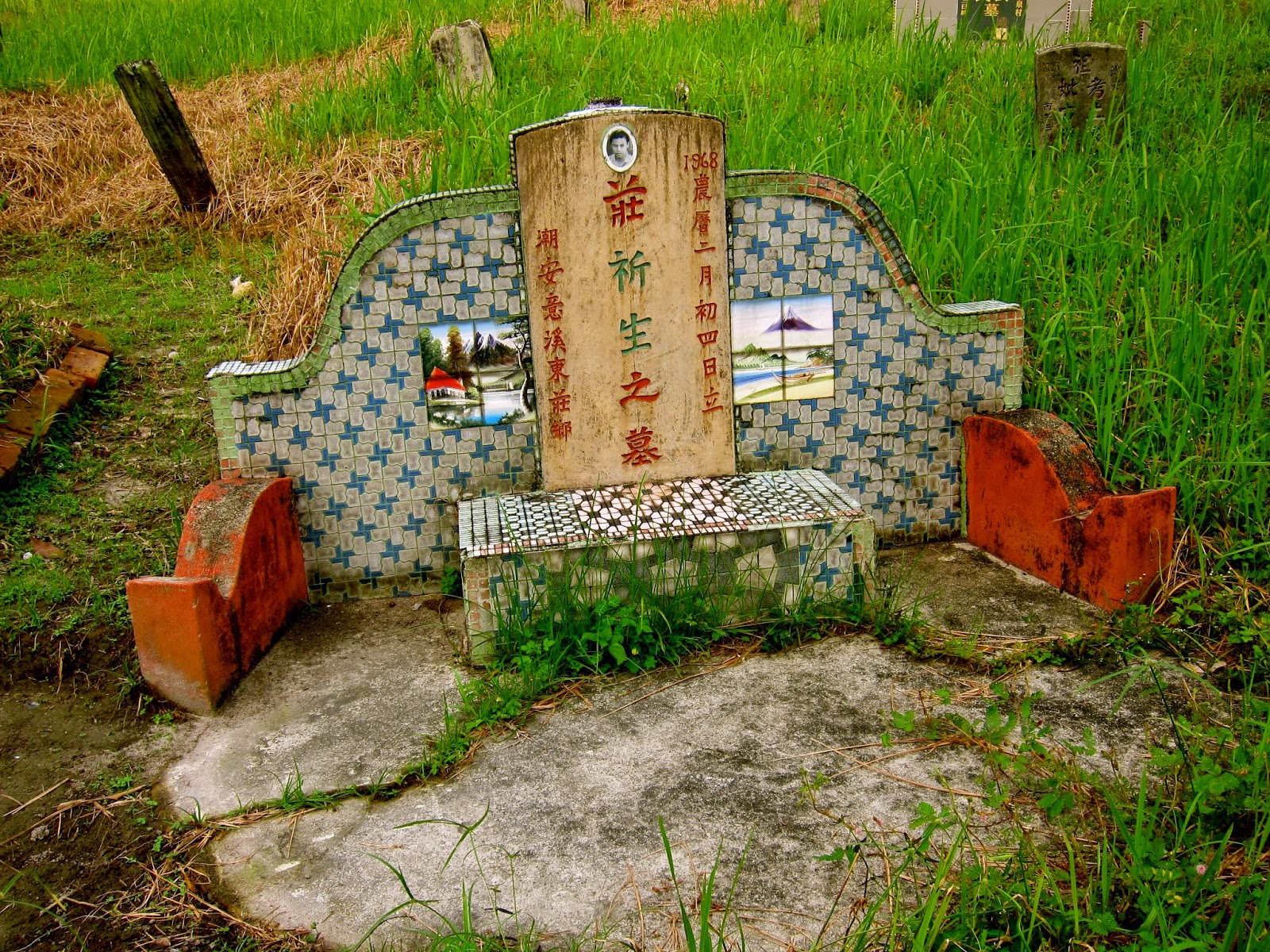 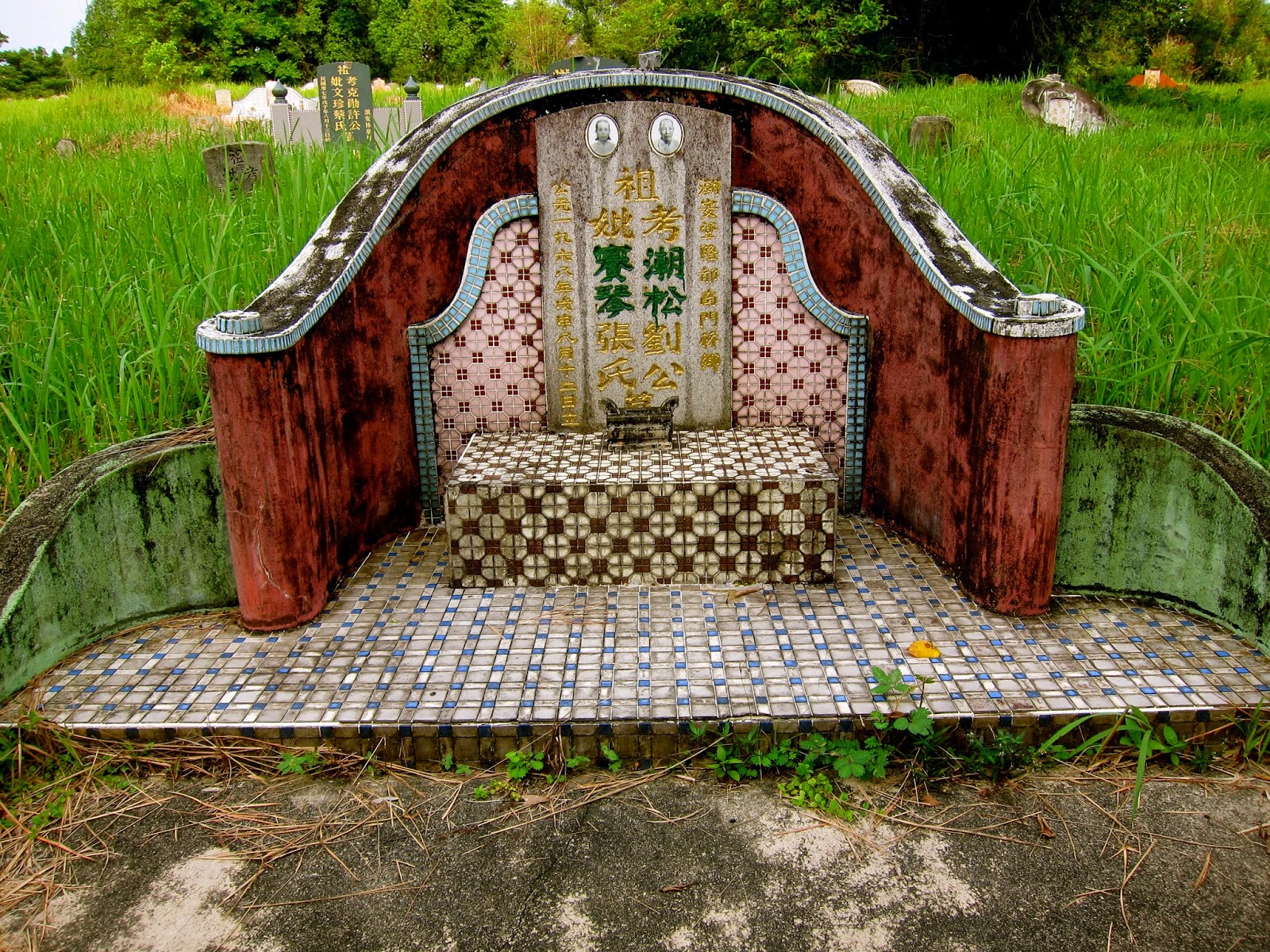 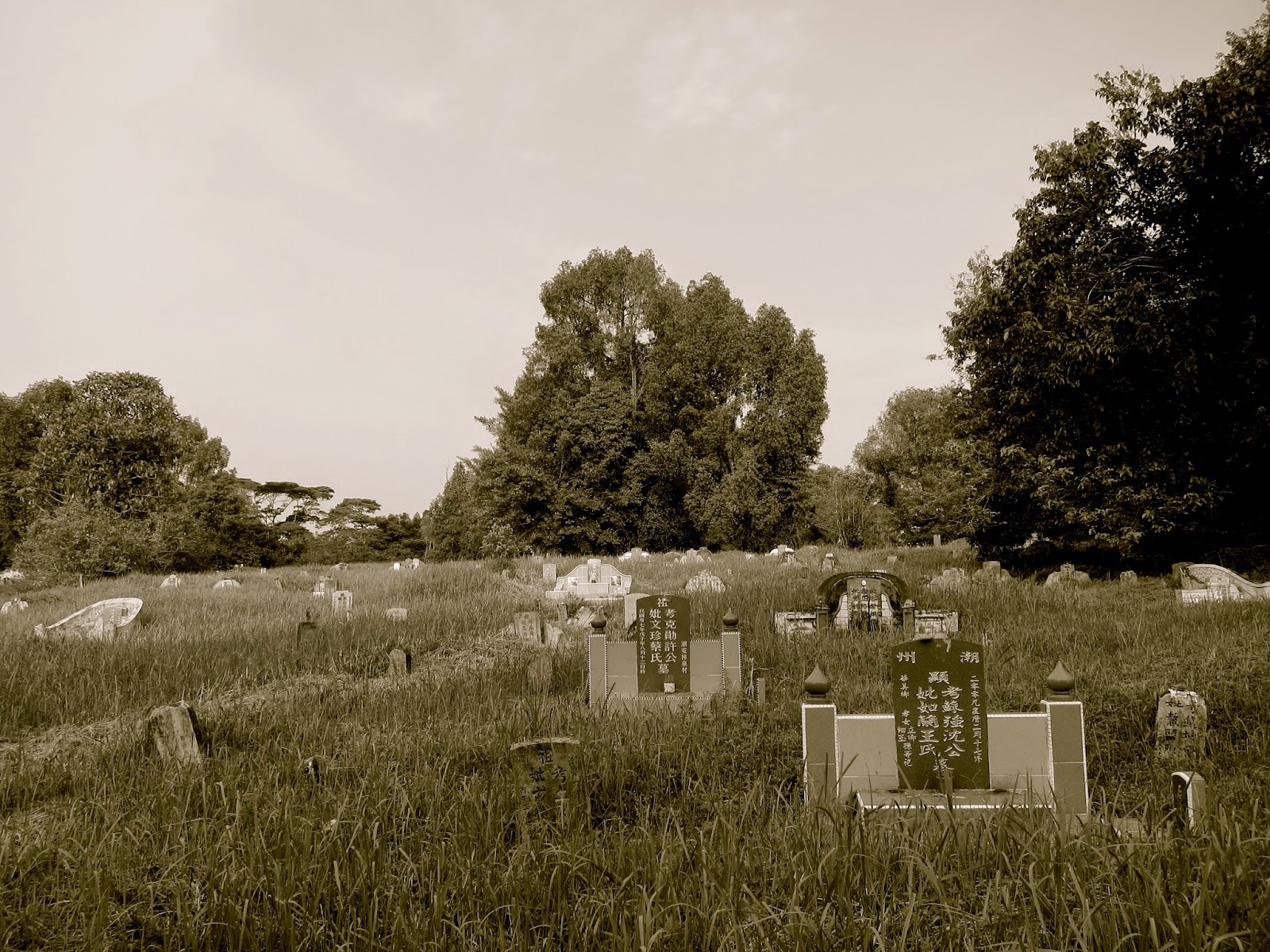 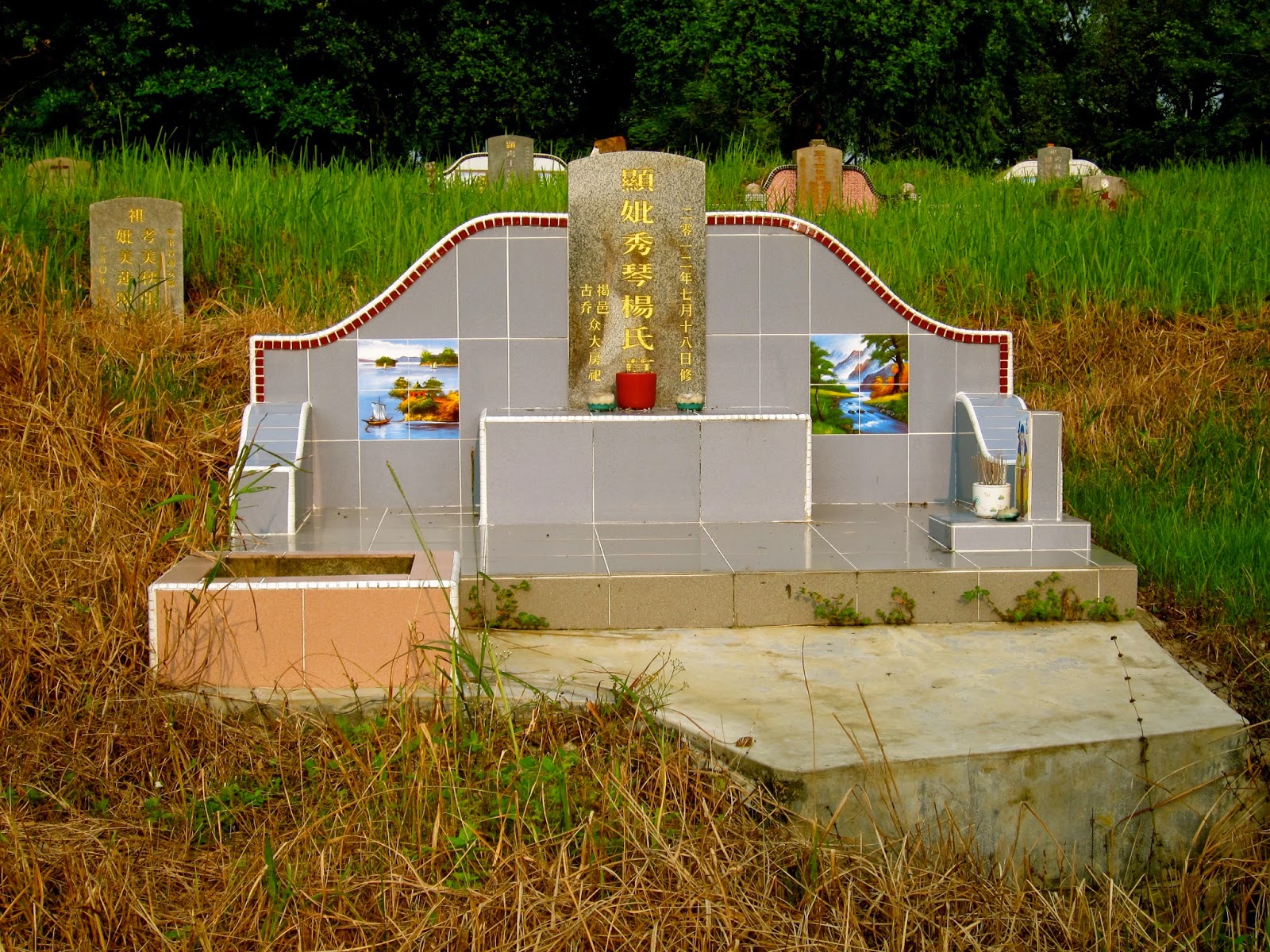 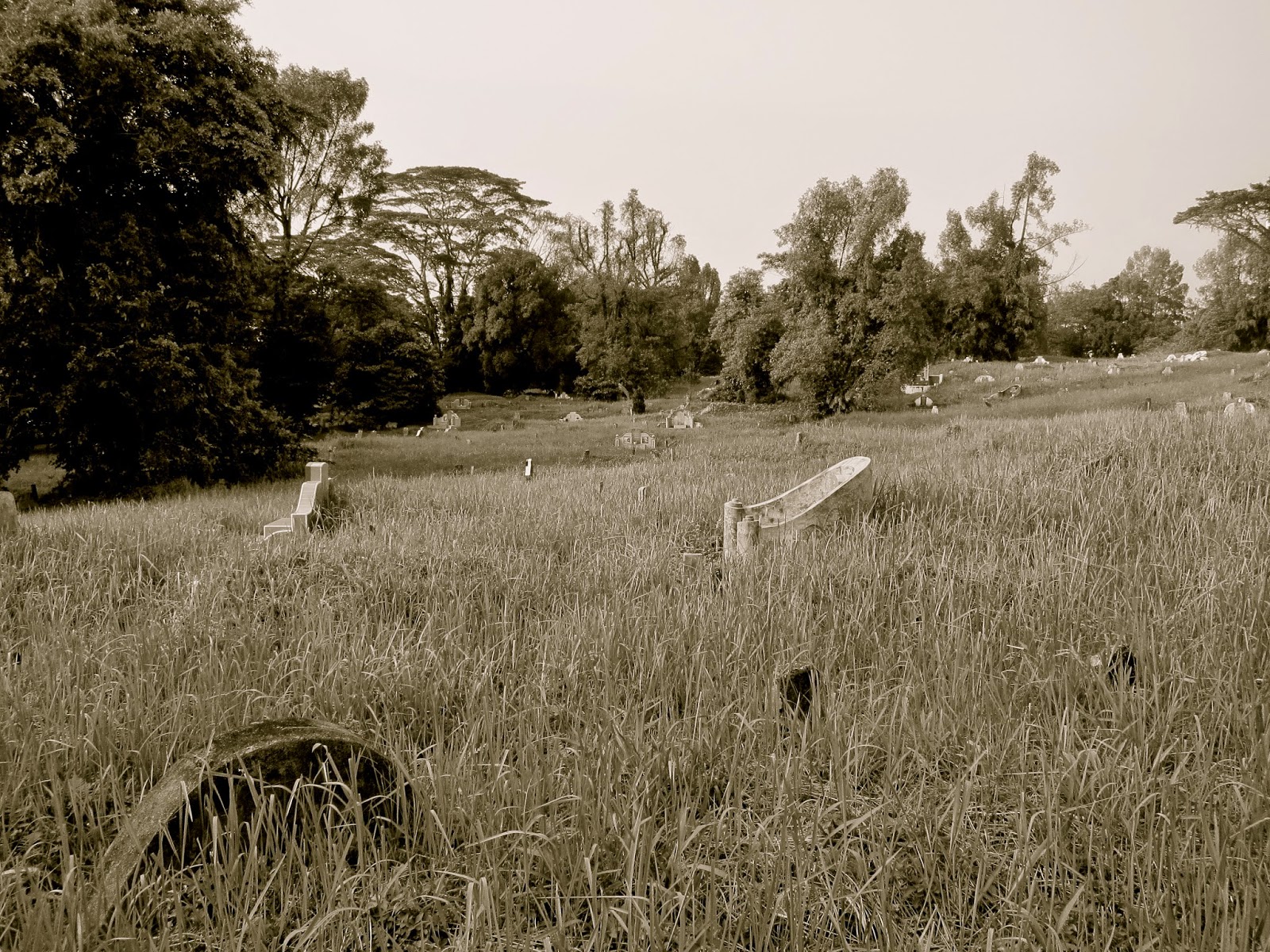 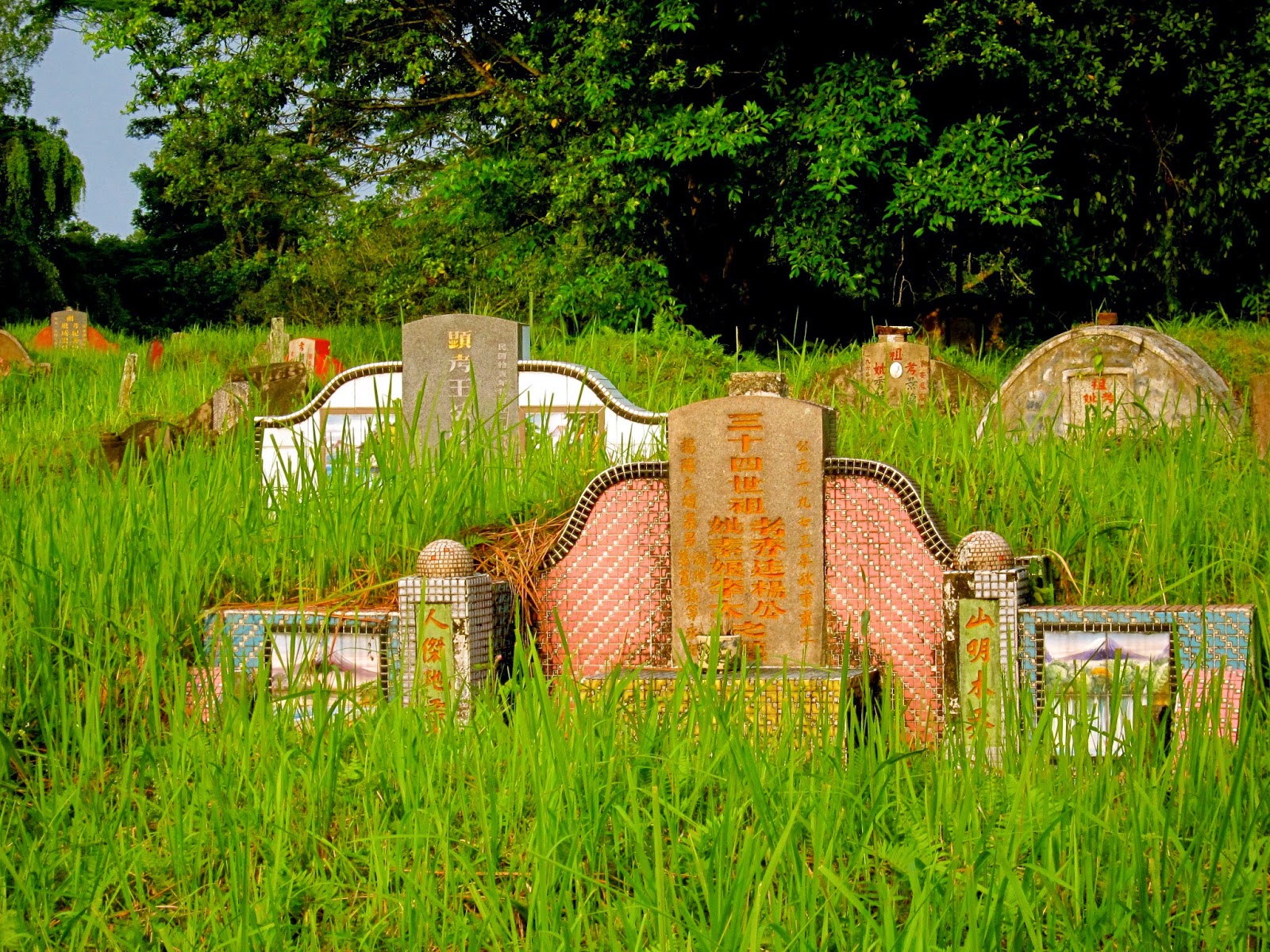 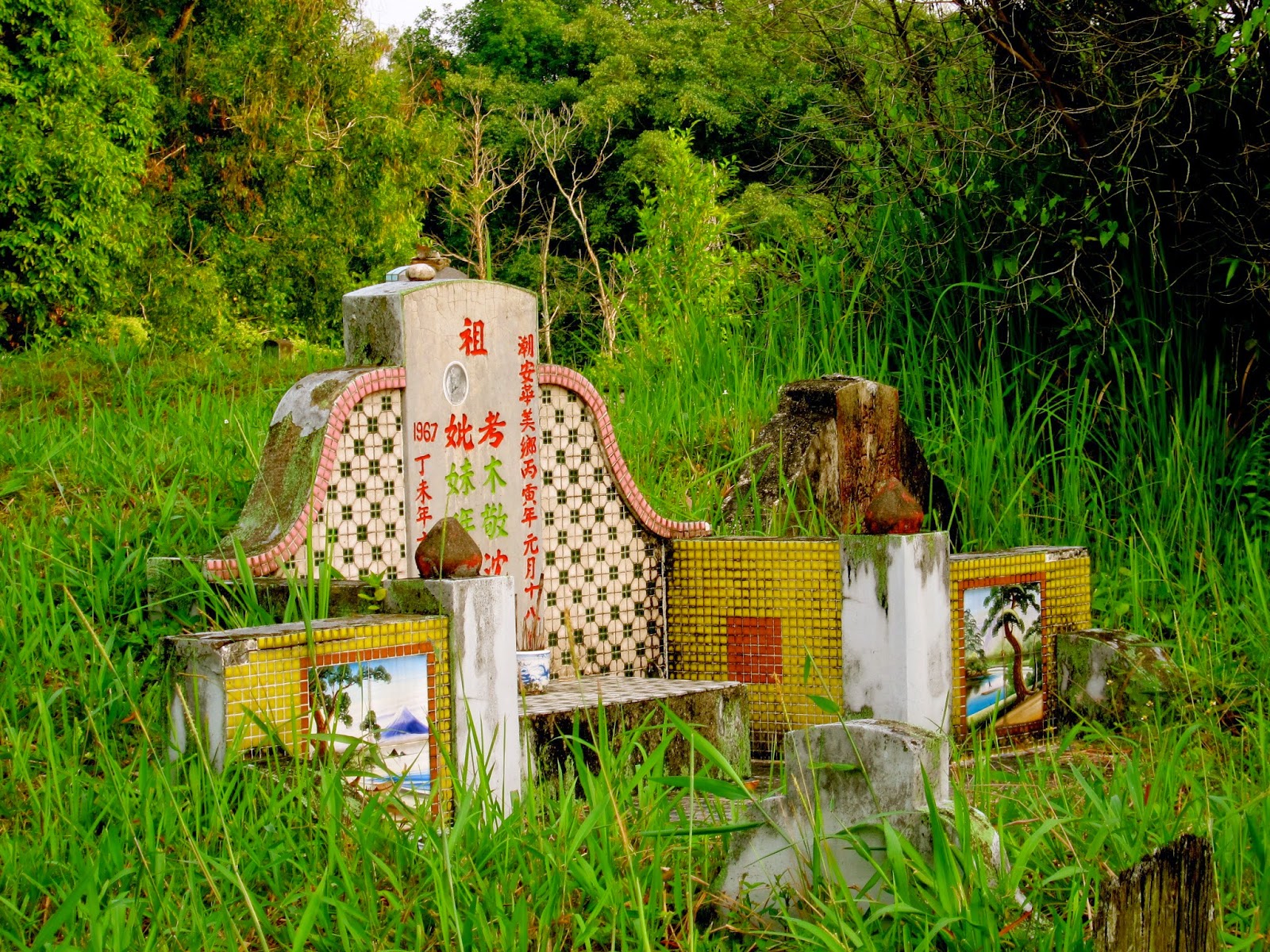 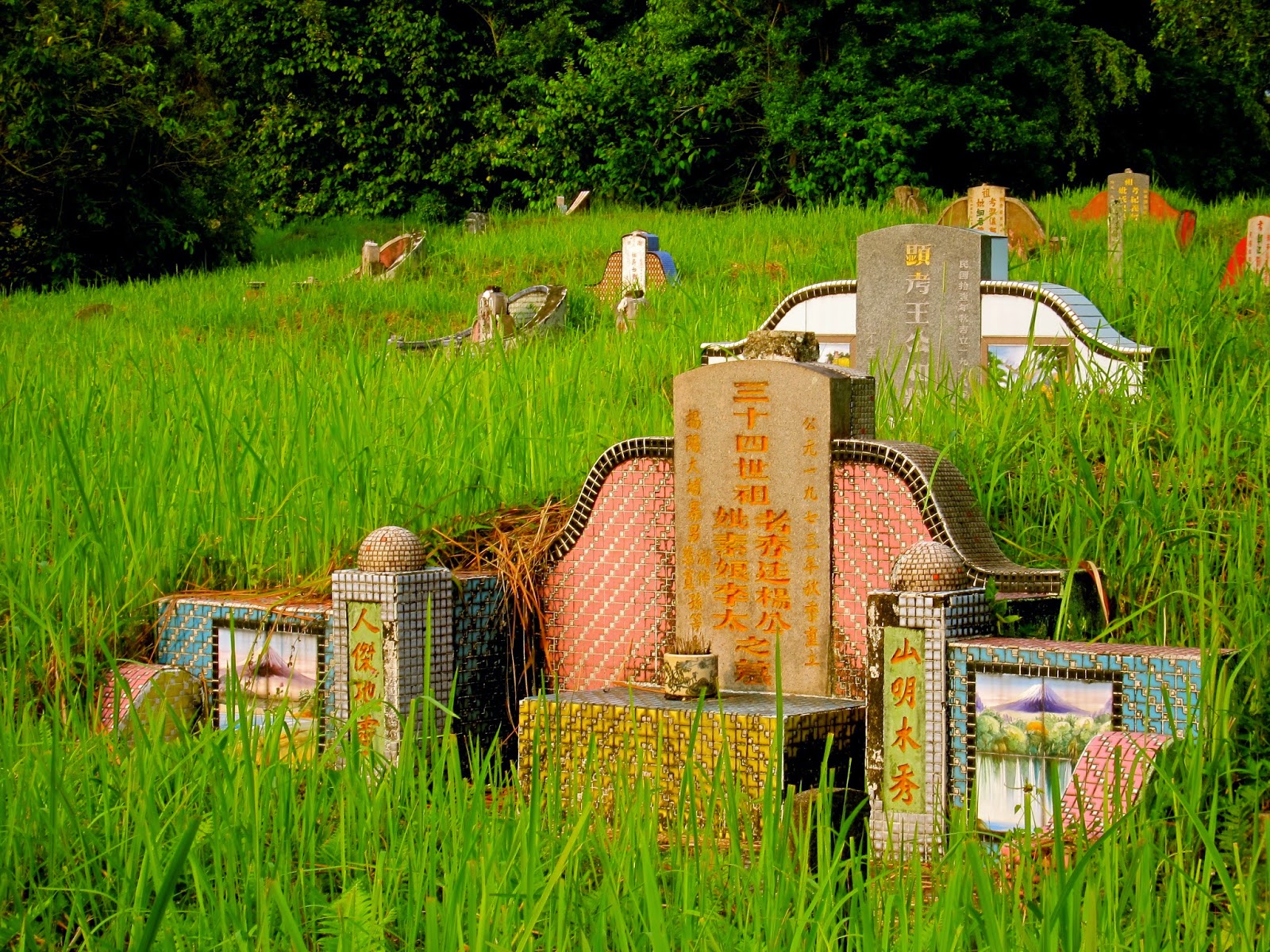 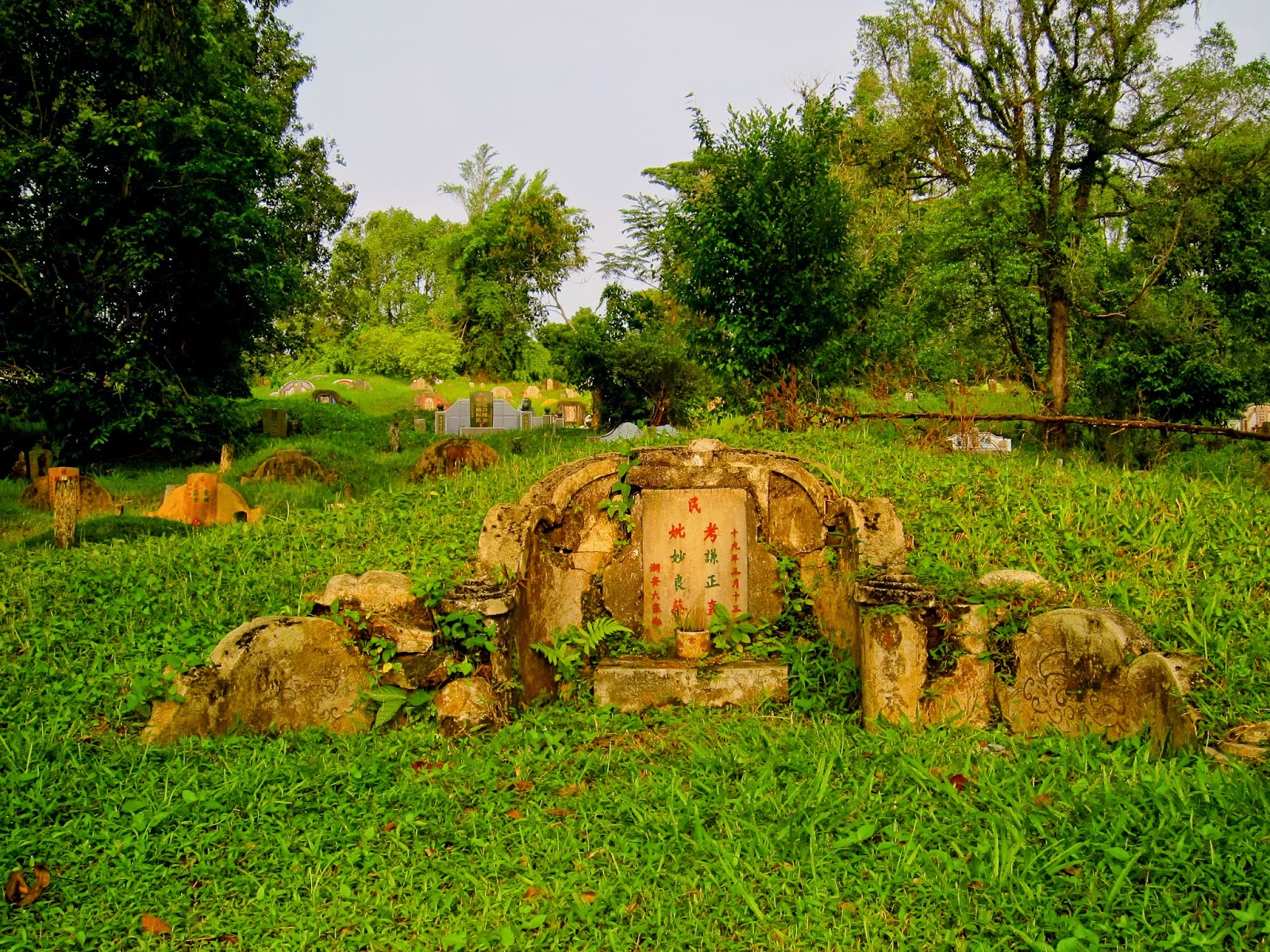 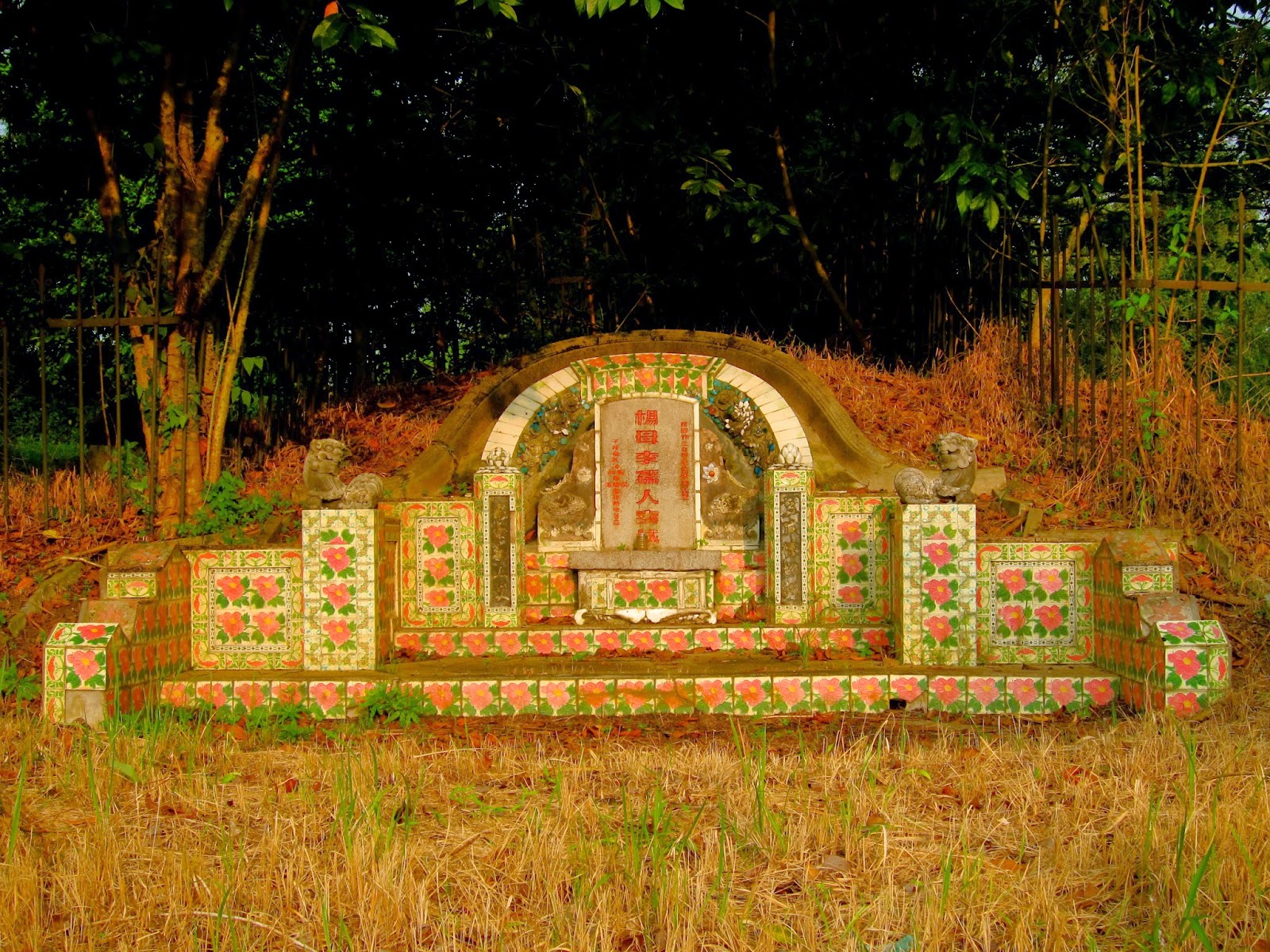 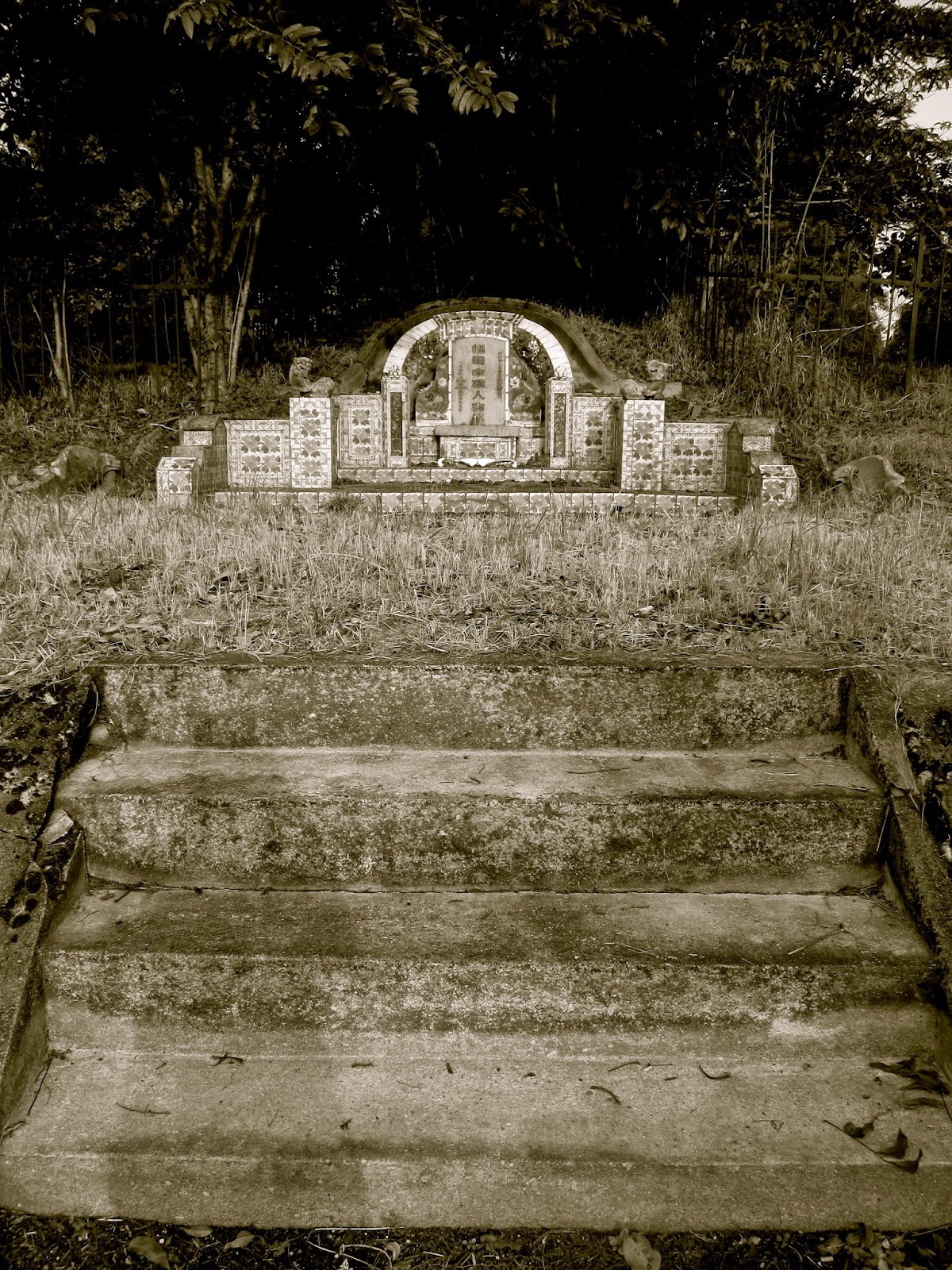 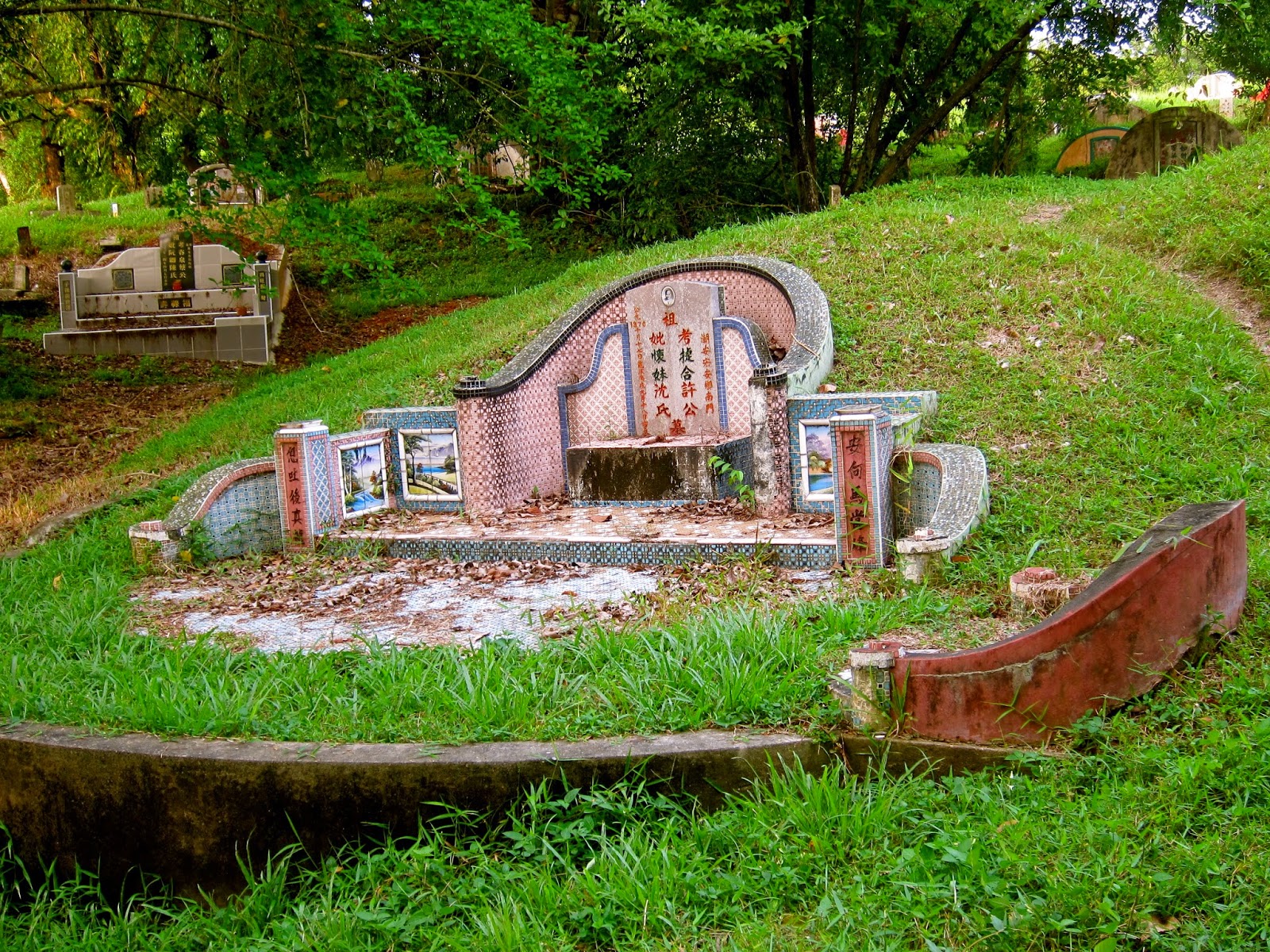 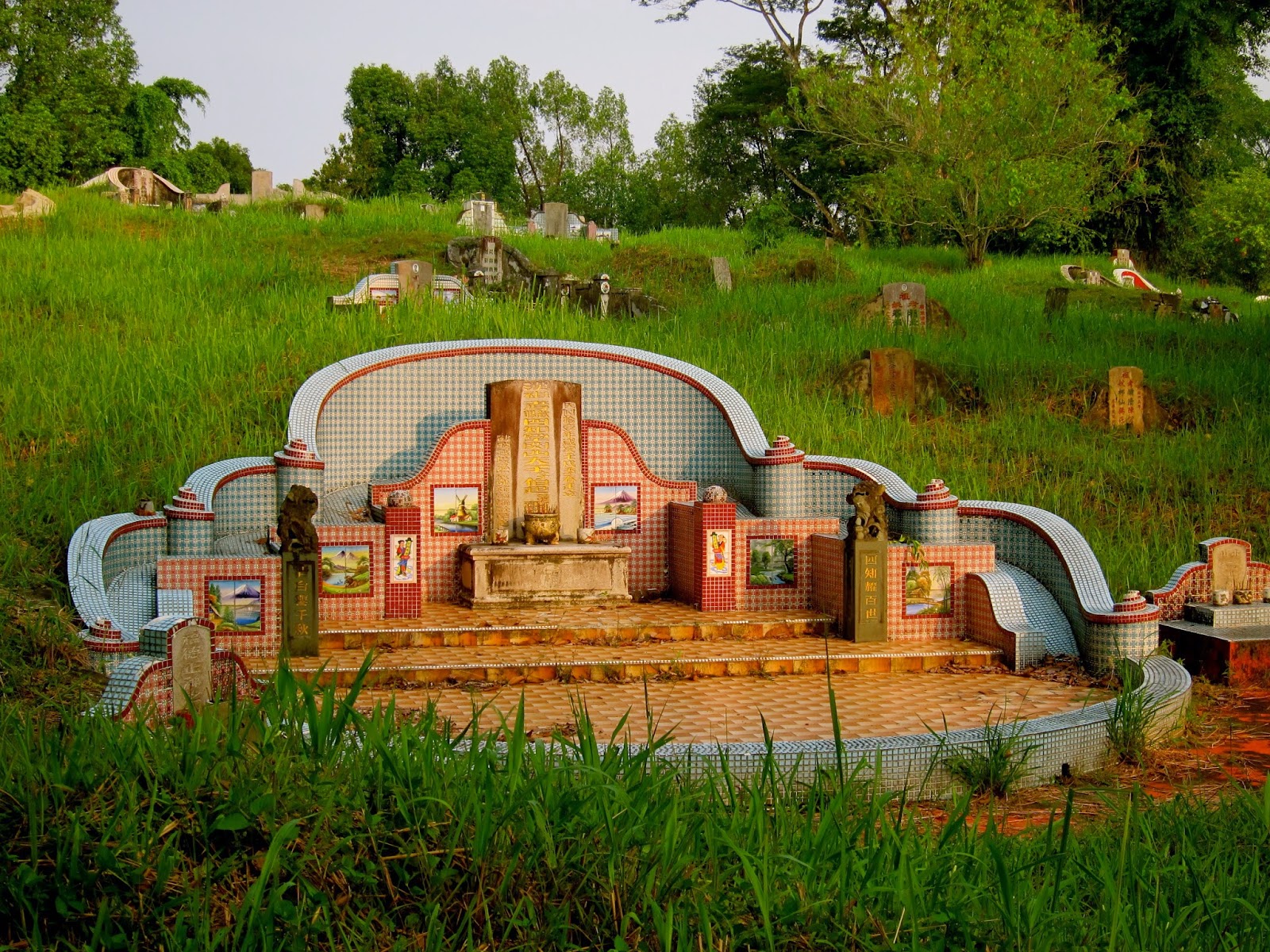 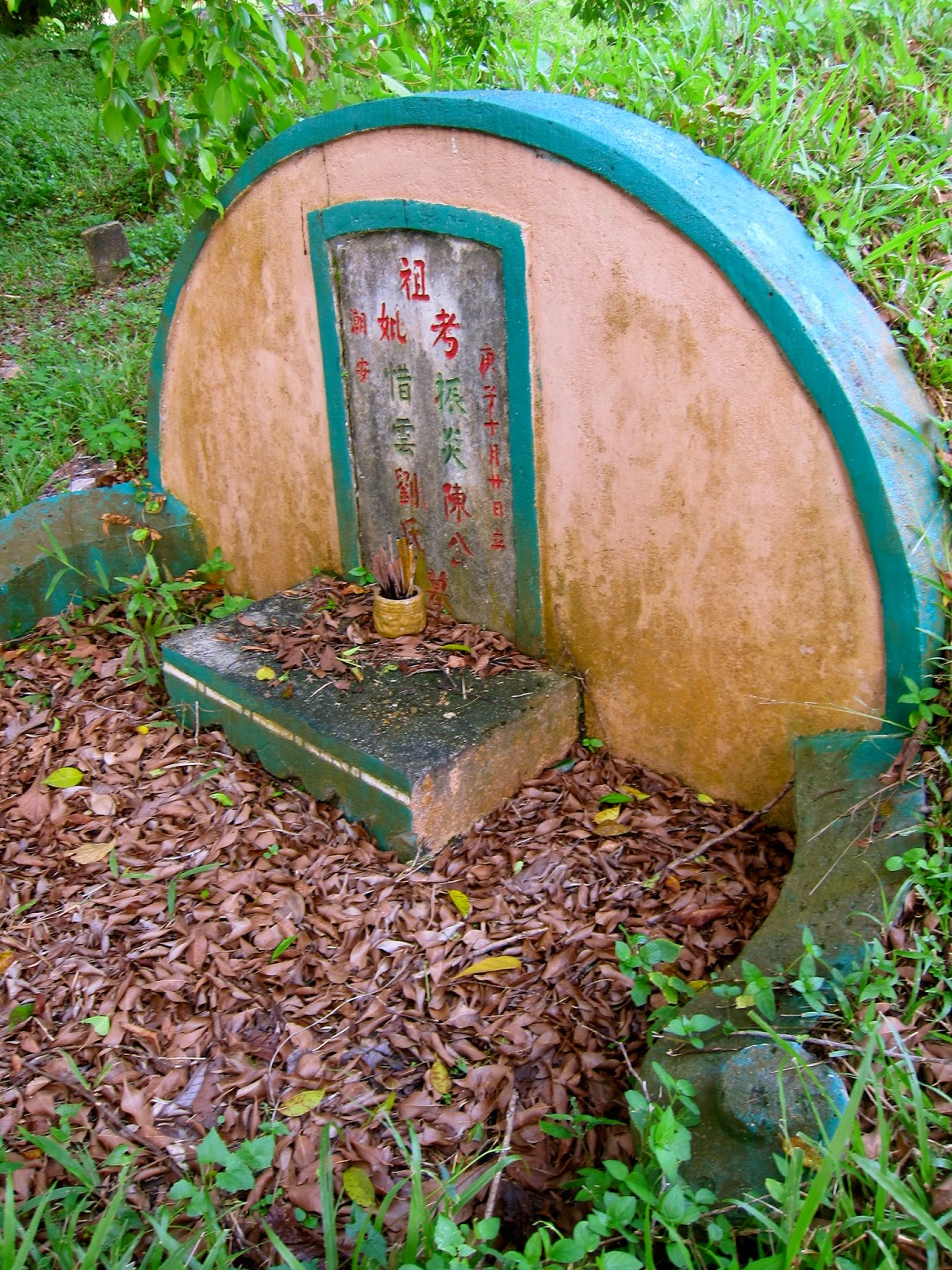 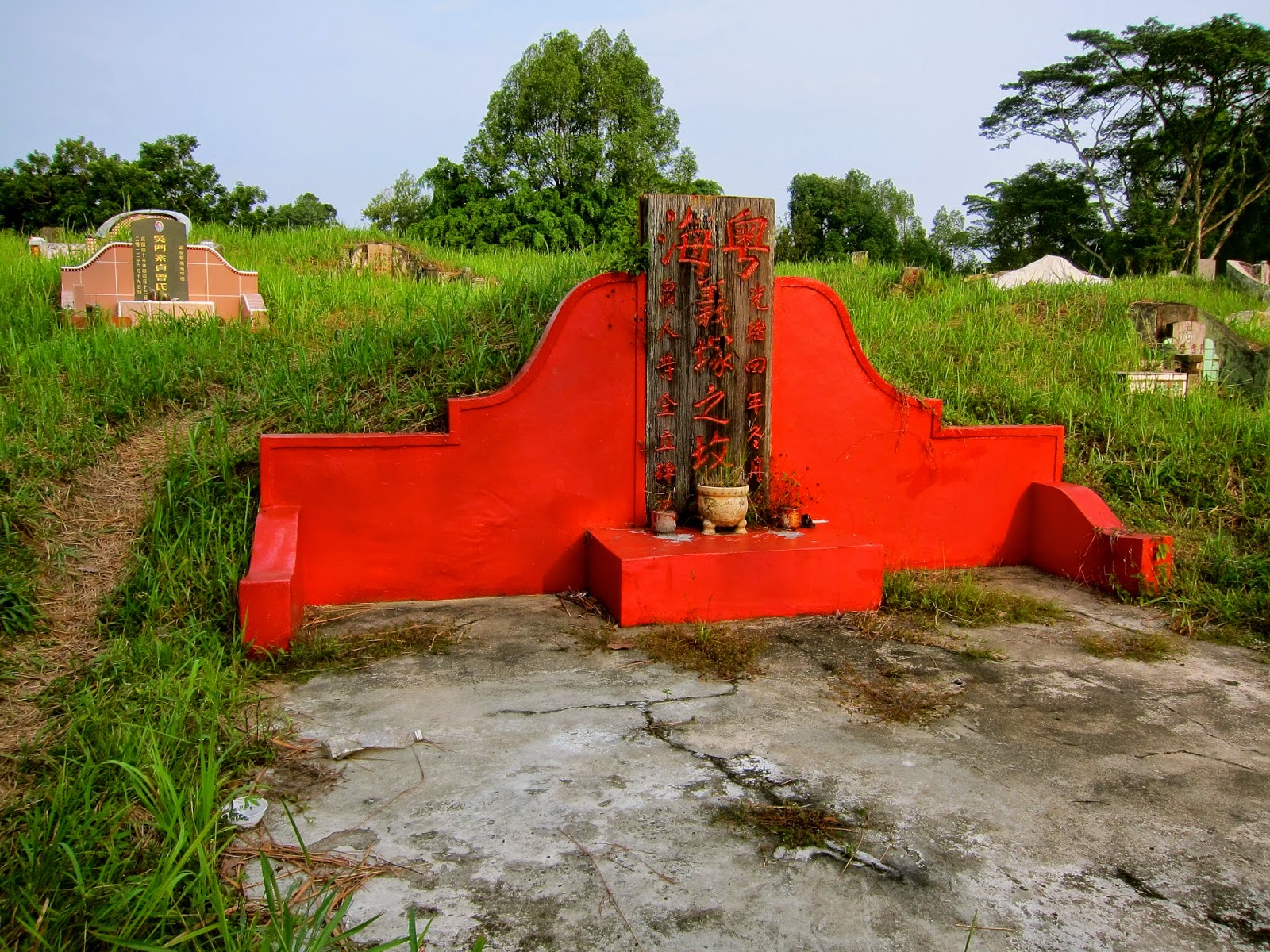 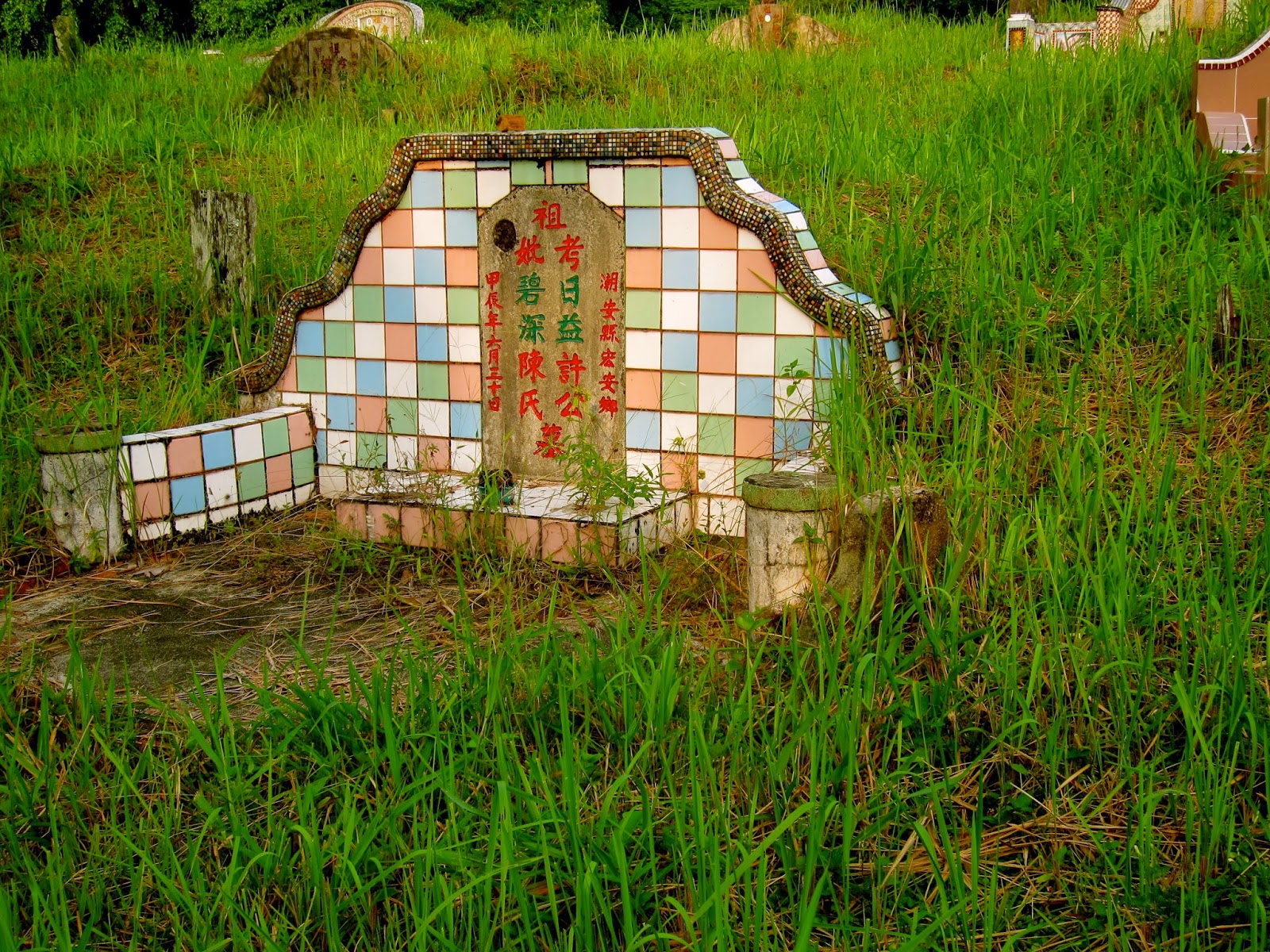 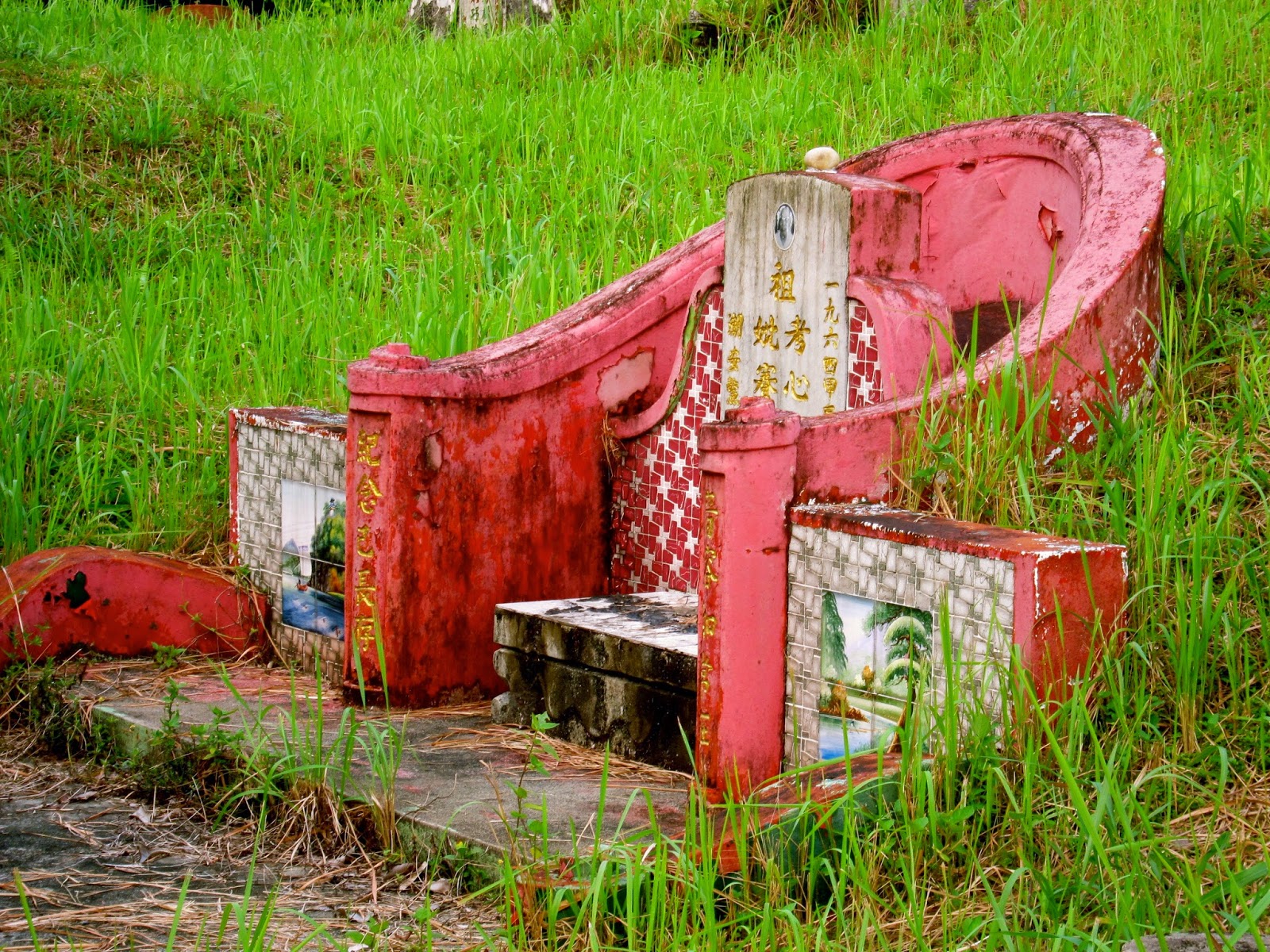 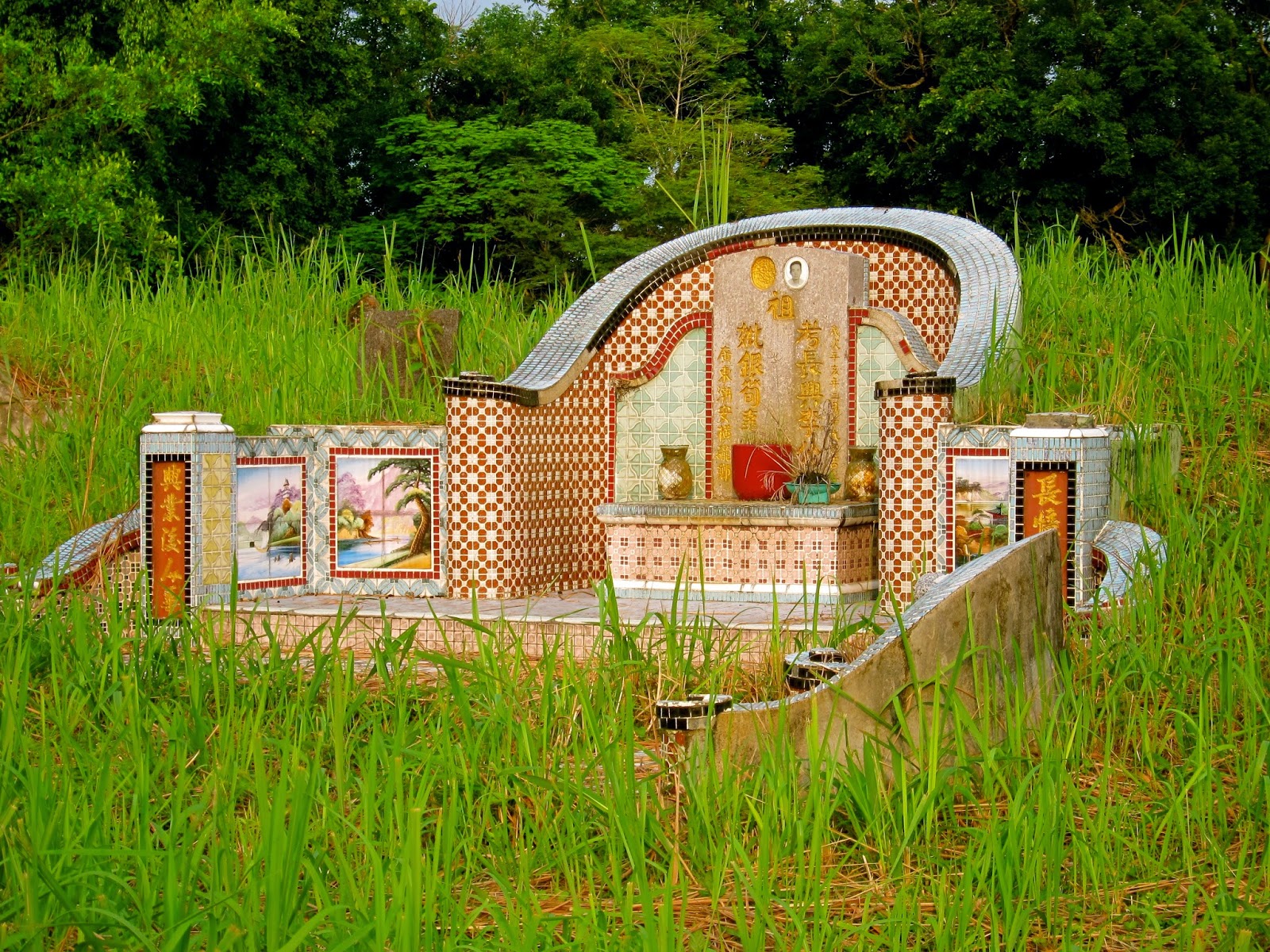 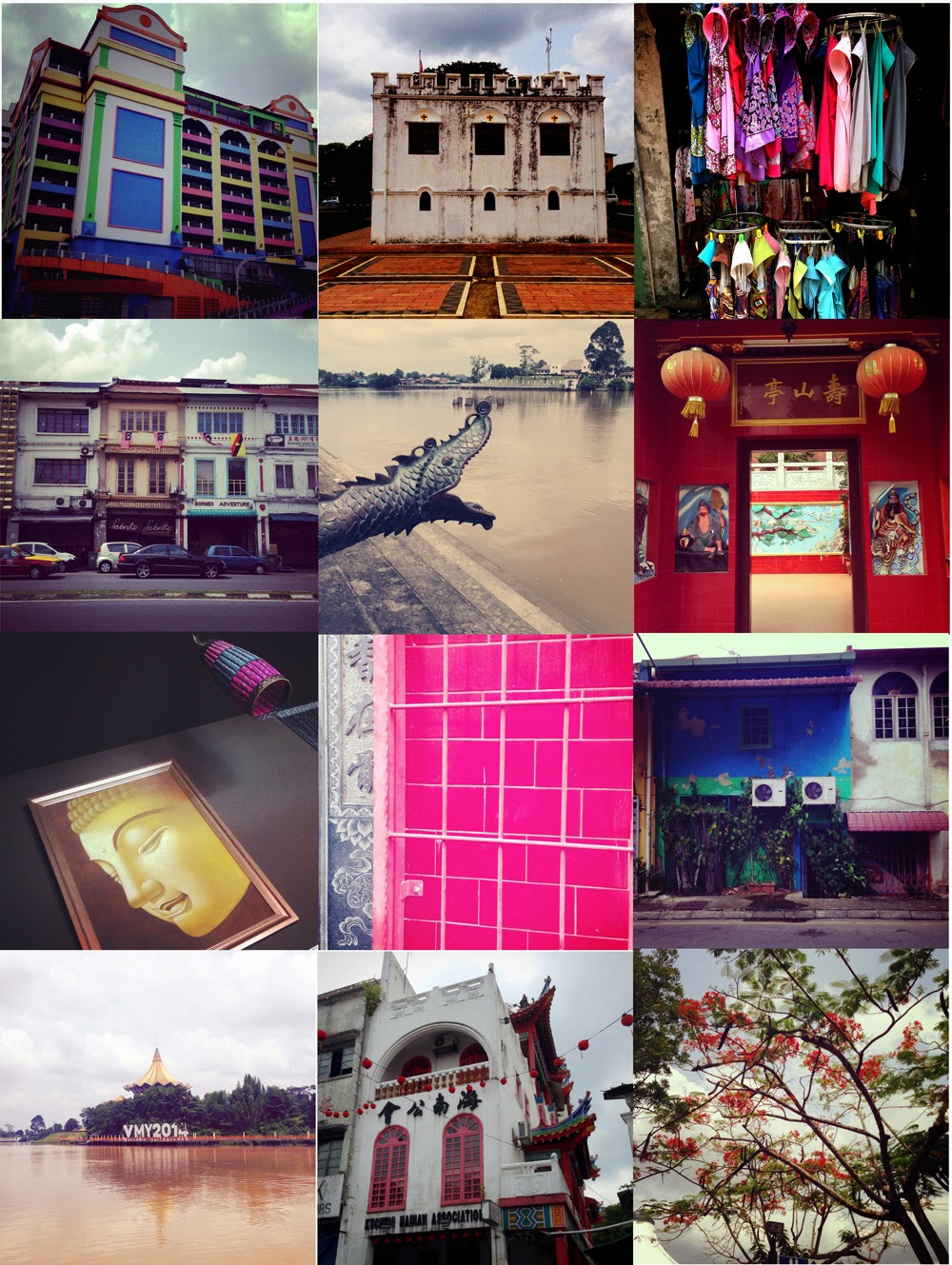 The Why Question: Reflections from Kuching 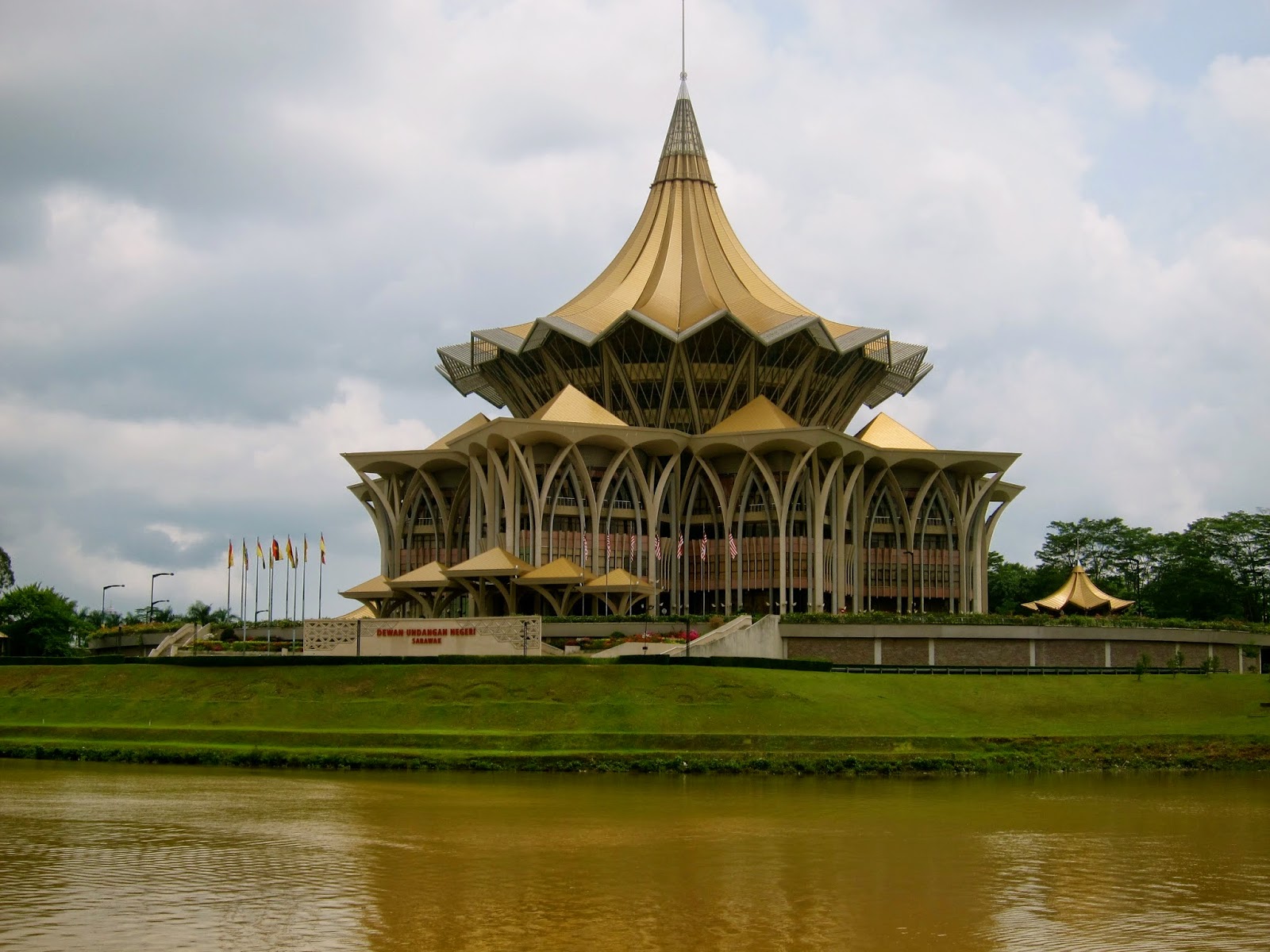 I’ve been getting the “why” question a lot from fellow travelers. When I tell them that I am on the road for six months, the first word is another w-word: wow. Then it is always followed by “why” in one form or another:
“What made you decide to do this?”
“What’s the purpose of your trip?”
“Why so long?” “Why Asia?” “Why now?”
Of all the conversations I was prepared to have, this wasn’t one of them. Although they start off seeming merely curious, I don’t feel like justifying my decisions to anyone. I'm here because I want to be here. I have dreamed of traveling around the world my whole life, and I  finally have the time, money, and energy to do it. I'm in between jobs at a turning point in my career, and I’ve been saving money for this trip since I was nineteen. I'm in Asia because I think this is the most fascinating region of the world. It’s at the top of my bucket list. There are places I want to see, things I want to do, and food I want to eat here. Being overseas, gleaning experience and knowledge from other people and my surroundings is a fundamental part of my identity. I am my experiences. I am interesting because I do interesting things.
This is who I am.

If judgment was absent from their initial question, it begins to show after I give my response. Somehow, everything I’ve said isn’t enough. They want to hear a specific purpose. An action-plan with measurable goals and a purpose. “I'm a mountain climber and my goal is to climb every mountain in this region” or “I own a restaurant and came here to sample local cuisine in order to revamp our menu.” They want me to explain myself with a label. “I'm a photographer…” “I'm a volunteer…”
When I can’t answer so simply they seem genuinely concerned. They look like they don’t know how to handle me. I worry them. Like I'm freefalling through space and my inability to condense my identity into one acceptable title spells my doom.

But here I am. The question comes up in every dreaded conversation, and the attitude, however masked by kindness it may be, is visible. I shrug it off. I laugh. I end the conversation. I keep going. I don’t need their approval to do what I'm doing, but it weighs on my mind. I was hoping that by traveling I would escape the social pressures to conform. I was hoping I would meet other non-conformists. But at barely a month into my trip, that has yet to happen.