Sometime simple is best. This rain coat keeps making a comeback in my life every spring. It seems this season in Portland is always too cold to go without a jacket, but too rainy for a winter coat. Each year I try to dress it up with some new accessories. 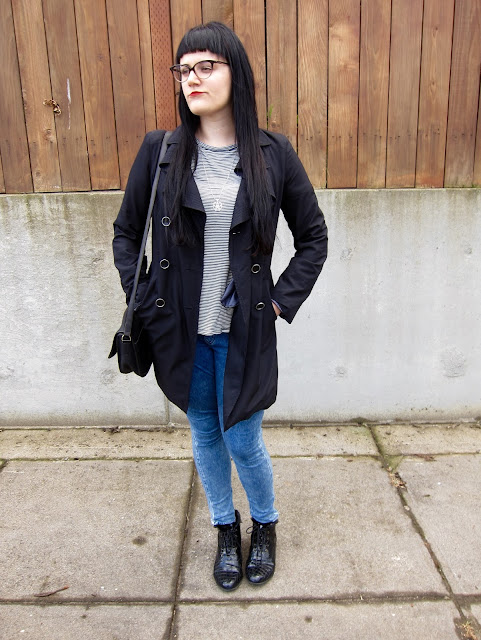 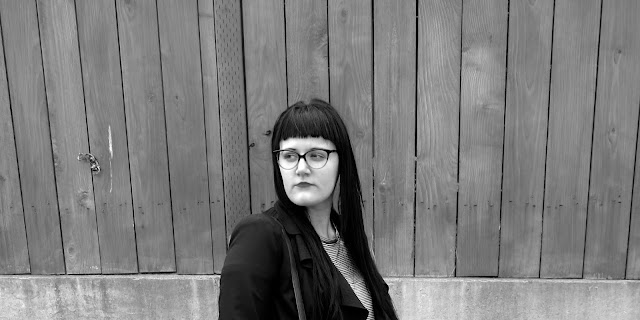 
Bag: vintage Coach via the Pasadena Rosebowl
at June 30, 2017 No comments:

A good story needs to ferment. It’s need to decay. It’s needs to be broken down to its elements before it’s ready to be told. Before you understand it fully. Before you can digest it. By the time you are ready to tell it, it is just a memory, but in the fermentation process, the chemical composition of that story has changed, it’s no longer the same story it was as it was happening. But it’s impossible to tell a story as soon as it happens. That’s not the time to analyze, that’s the time to feel. That’s the time to look and listen inwardly. Then let it steep in itself for a while. Let it break down, and then it’s ready to be told.

I’ll have a story to tell about Greece one day.

But now it is approaching 7:35pm Athens time. Earlier I was thinking about what a pleasure it was to be back in Athens for one night, knowing my way around, seeing familiar sights. Even though they weren’t that familiar. Even though many were still new discoveries, like Loft cafe near our house, or the Korres shop in Syntagma, or the sushi restaurant which was really a to-go counter, or that powerful humidity in the depth of Syntagma station. But it was nice to know my way around, without looking at my phone or second-guessing myself. I wouldn’t say I feel like a local, but I have some sense of position, and with a sense of position comes a sense of self. It’s something I’ve been struggling a lot with lately.

A few days after arriving in Ikaria I became overwhelmed with feelings of self doubt. The self doubt fed the identity crisis I was having ever since I set foot on the Aegean airlines plane and saw those beautiful slim Greek flight attendants. Why don’t I look like them? Why can’t I speak Greek like them? I hate being a xenos in my own father’s country. Why do I look so shitty? I felt a little better after everyone of my family members said things like “you are your father's daughter after all” or “you look like [some relative]” or “miazis.” And after they smiled and said Popaki, or Popitsa when they learned I am a Calliope. Then I felt like I belonged in this world a bit more.

Before I came to Ikaria I had fantasizes about living there for a few years. Maybe I could raise a baby in Ikaria? I had a lot of relatives there after all. And healthcare would be cheaper. And the food is better and the air is cleaner and I can live a healthier, more natural life. Well, that’s not how I feel at all now. I’m not even sure I could have survived on the island for eight more days. Not on that hard bed. Not through those hot nights. Not on the dirty floors. Not without bedroom and bathroom doors. I would need to significantly upgrade my accommodations to be comfortable there. Before I left, I thought the social aspect of it would be the worst, that it would be taxing on me to socialize with so many relatives and in a language still so ungraspable to me. But that got easier with time. As were approached our last few days on the island I grew to want the company. Why waste time alone in the house? (The house was uncomfortable anyway). I wanted to be around my family, and as many as possible. That got easier, but the discomfort did not subside. I told my partner halfway through the trip that I was seeing the island like a negative space painting, see what is not there more than what is. No Japanese food. No Indian food. No foreigners besides tourists. No movie theater. No where to be seen. Nothing to wear besides fisherman pants and sports bras….

I’m sitting in the food village beside a window that overlooks the runway. Just moments ago, when I looked over my left shoulder, I could see the dusk. Now, because of the darkness outside, I can see only my reflection. Grey hoodie, hunched over in front of a laptop. Black bun and glasses. Now I see myself.

What did I buy in Greece?

Too much or not enough? That is the question. After a 1.5 decade absence from the country of my father’s birth, I felt like I needed to stock up on enough souvenirs and supplies to last us until our return.

Our bounty can be divided up into two categories, food and stuff.

We purchased all our food souvenirs from my family’s island, because we could be sure to get things with authentic local ingredients. Pictured from the top going clockwise: 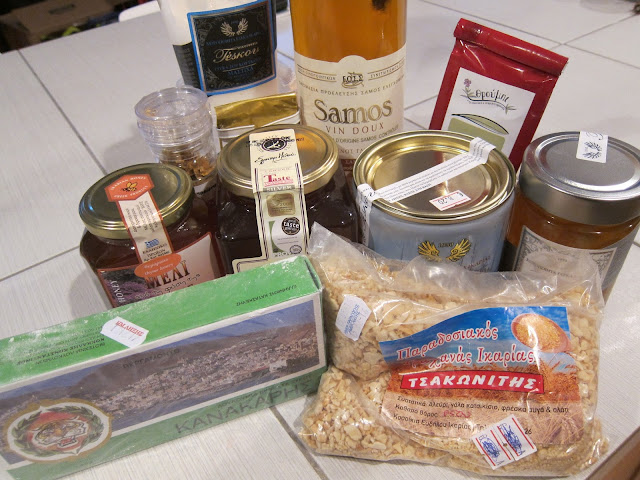 In the stuff category, we further divide into a section of memorable Greek souvenirs, which were mostly gifts from my family. Pictured from the top going clockwise:


Evil eye to hang in our house 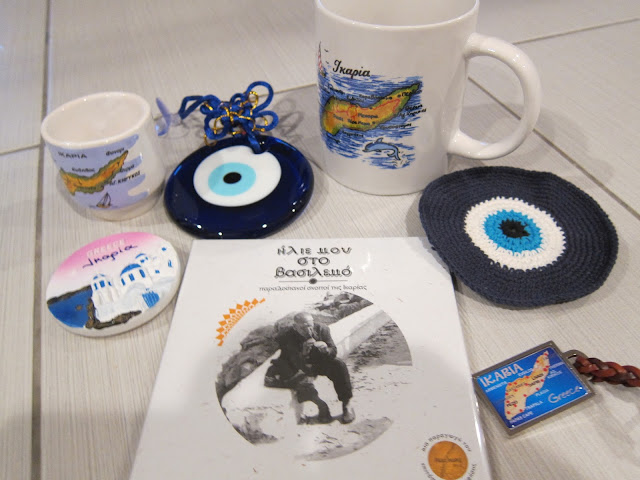 Also in the stuff category would be Korres beauty products. Korres is a Greek beauty company and I want to support local business. From top to bottom: 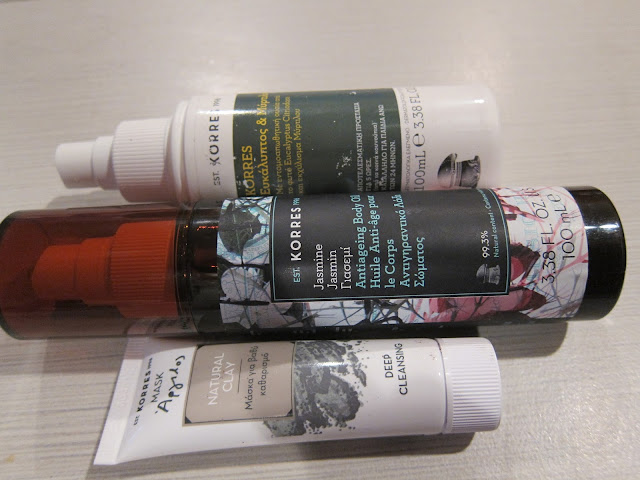 There is also a paper products category, which weighed my suitcase down plenty. From left to right:


A Ikaria travel book in Greek 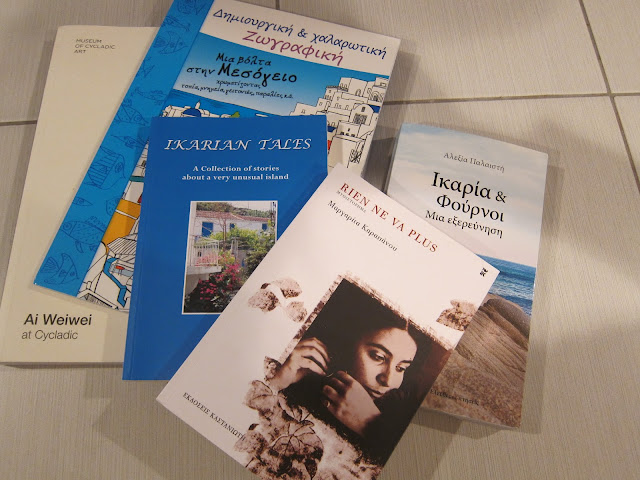 Lastly, I got a couple cool totes from various museums. On the left is a tote from the Rijskmuseum in Amsterdam (ok, I know the title of this post is What Did I Buy in Greek, but come on, it’s the only souvenir from my layover), and one from the Cycladic museum of Art in Athens. 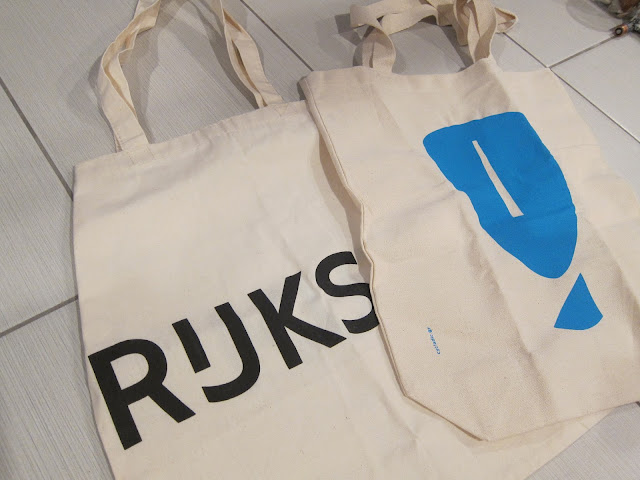