Street Sneaker: Teenagers on the Strøget 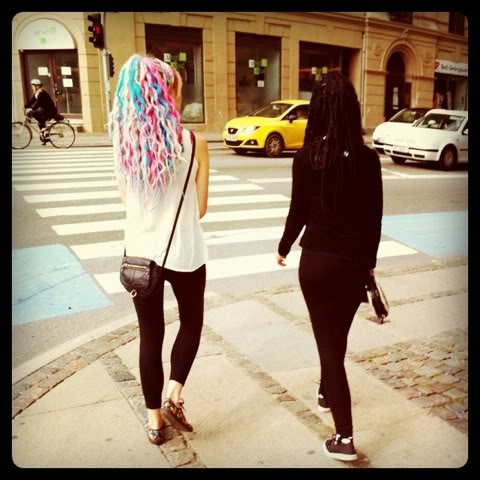 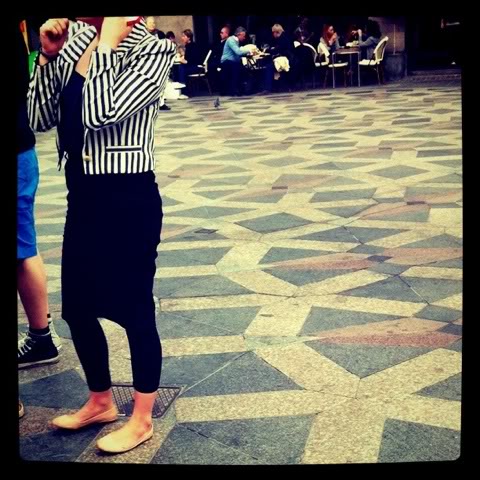 These photographs were taken sometime between 1999 and 2003, with a slightly better-than-disposable camera. I can no longer recall the specific cemetery in Dallas.


This first series of three tombstones was most fascinating.

The most unusually shaped tombstone, void of any religious imagery, resembles the stump of a tree.

Fall leaves and shadows on an old tombstone.

A statue on top of an old grave looks fearfully and mournfully towards the sky.

The book of Psalm.

In a follow up to my first post on covert streetwear photography, I am posting additional photographs. 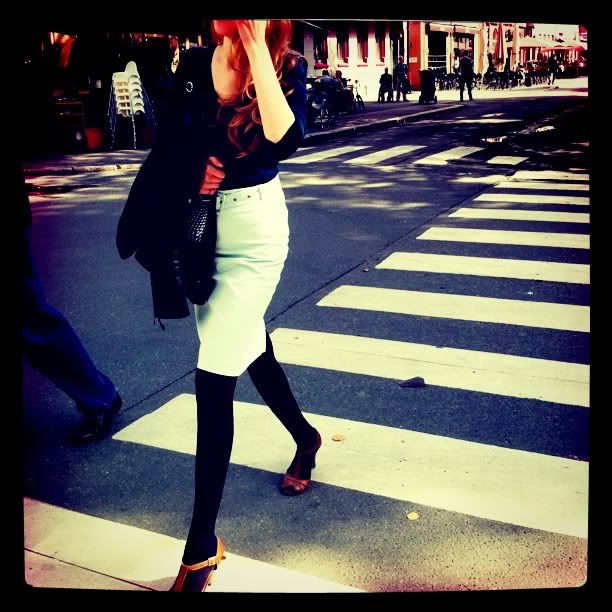 Students outside The Royal Academy of Art in Oslo. 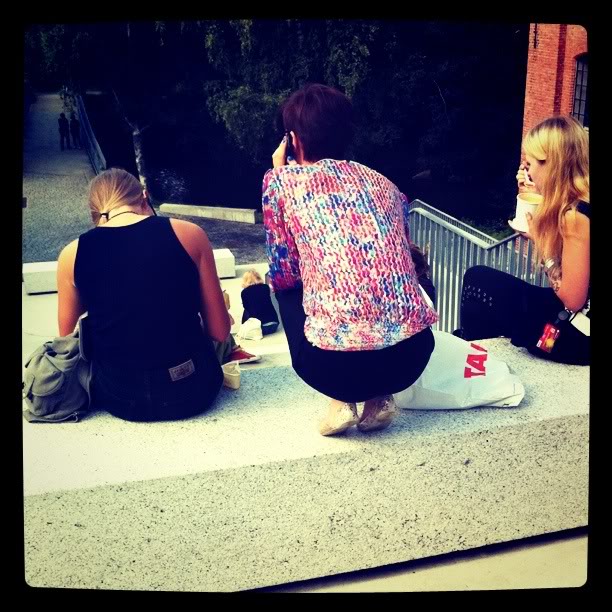 A lafy right out of an 80s music video. 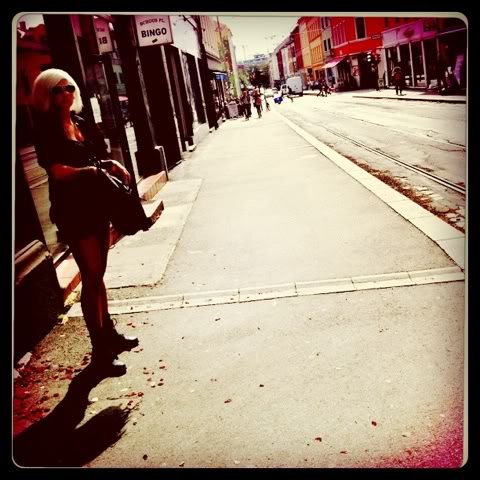 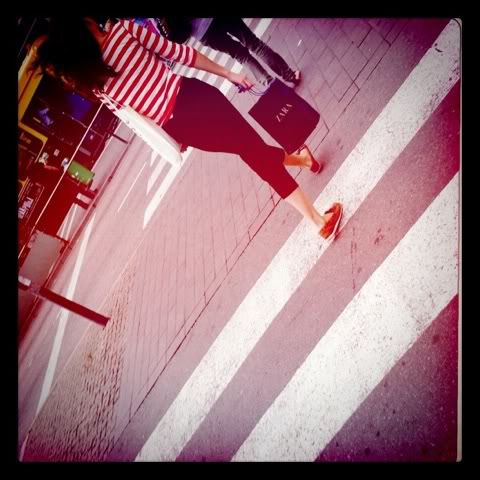 Alright, I'm cheating. This shot isn't streetwear. These are models doing a photoshoot in Iceland.
It was freezing that day! 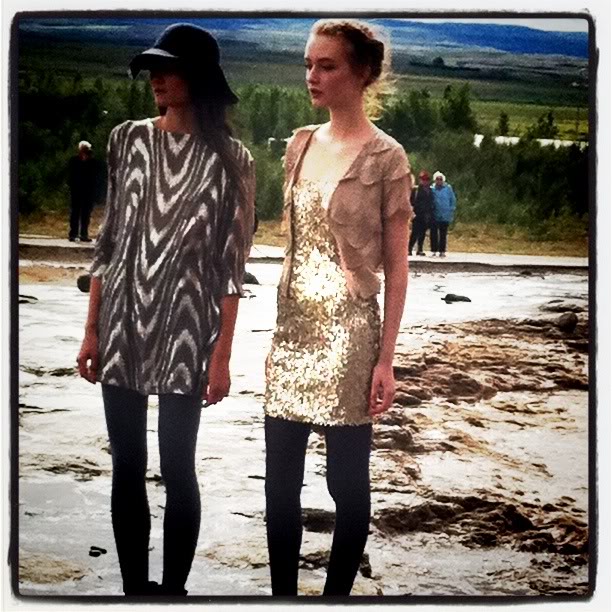 This amazing sweater was worn by a tourist at Stockholm City Hall. She is seen here photographing the concert hall across the water. 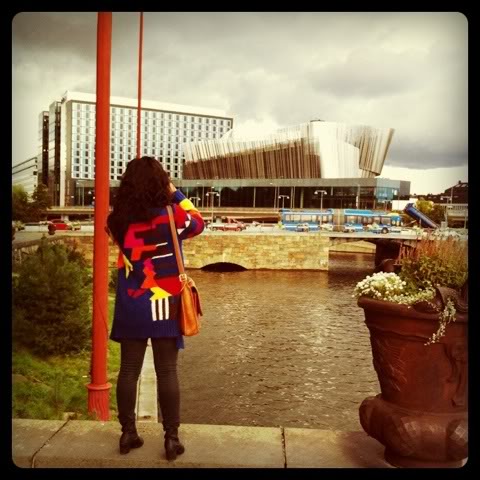 If you're confused, you ought to go back to Part 1.

So I am now only hours away from leaving for the Airport and returning home. This fills me with great sadness because I have really enjoyed my trip. The Amasawas have been so nice and helpful which really made my time in Tsukuba enjoyable.
Saturday morning, after a hardcore night of partying Jonathan and I slept in...until ten minutes before we were supposed to check out! So we hauled our bitch asses out of bed and packed our things in a hurry, checked out of the ryokan with 2 minutes to spare. Amasawa-san and Iho-chan were not coming to pick us up for another 6 hours. So I went and did some shopping in Harajuku all by myself while Jonanthan went out with the gay guys to a Tobacco museum. It was so exhilarating to go back to the Laforet. It is definitely the place I want to have my shop. God it makes me cry! The fashion there is so wonderful! I am so intimidated, yet I know that I would definitely rock the pants off the Laforet if I had my shop there. Harajuku is so amazing. It had a slightly different feeling to it since I was walking by myself. I didn’t feel like a stupid foreigner, I felt like just another person on the streets. I think Toyo is wearing off on me. I could definitely settle down here.
By the time we made it back Yuki had just gotten off from work and we all walked to the 100 yen store. That is about the equivalent to a Dollar Store in the U.S.. Because Jonathan is such a cheap ass he planned on getting all his gifts at the "dollar store" so he totally splurged. The 100 yen store is totally cooler than a dollar store in America, they have way more stuff and it is better.
Well, at 4:00 we met Amasawa-san at the ryokan. We headed out for a long drive to Tsukuba. Did you know that is about 4.50 a gallon?! Yeah, so I really appreciate Amasawa-san for driving to Tokyo to come and get us. Also they had to take the toll way. In Dallas the toll fees are usually 45 cents, 75 cents, or even $1.5 the most. Well, I looked at the prices of the toll is Japan, it was about $7, $11, $15. yeah, that sucks.
We arrived at the Amasawa home at around 5:30. I almost forgot how beautiful their home is. Learning about Japanese culture has given mea much better appreciation of he things in their house. Like their Tatami room. It is huge! Only the rich Japanese have Tatami rooms. And their toilets are the nice ones with all those cool operations (which I have not only gotten used to but also like) It is going to suck when I have to go back to America and sit on a cold toilet seat. I hope I can live in a home as lovely when I move to Japan. Certainly not if I live in Tokyo though.
That evening we went out to eat at the Italian/American/Japanese food restaurant. There Jonathan and I met these awesome girls from Taiwan. They were students at the University of Tsukuba. They didn’t really like Japan. It was very interesting talking to them because we got a different perspective on Japanese culture. They pointed out some of the cons about living in Japan. Like the expense, and the racism to foreigners, and the pressure put on conformity to the culture. Damn, we ate a lot of food! Jonathan and I decided to go all out and eat like pigs. Just for myself, I ordered two appetizers, two entrées, and two desserts: soup, chicken wings, pizza, rice stew, flan, and ice cream. And then do you know what happened! Those Taiwanese girls paid for our entire mean! I didn’t even get a chance to look at the bill, but it was probably a lot since we ordered so much. Apparently they were there with some Taiwanese club from the University so they charged our bill to them. How nice! After that our fat asses just went back to the Amasawa’s house and slept.
The next day I had some time to shop in Tsukuba because Jonathan went out with Amasawa-san to look at a waterfall. Stuff in Tsukuba is so cheap compared to T0kyo. It kind of makes me mad. After Tokyo though, Tsukuba seems so calm. I miss Tokyo already, but I enjoyed my restful stay in Tsukuba, and I am looking forward to going back home. I found an antique Kimono shop though and purchased two kimonos. They were expensive but considering that a new Kimono usually sells for about $5,000-$10,000, I say I got a deal. That night we went out for Korean BBQ and it was Amazing. The Amasawa’s paid for our meal. This has been a pretty cheap trip.
So, now I will soon have to leave for the airport. This has been one of the best times of my life. I am so determined to live here someday, and this trip only confirmed that. I hope I can come back a few more time while I am in college. This is the best country in the world and the fact that I go the chance to experience all this now totally rocks. On a final note, Jonathan left a piece of America on one of the walls of a bathroom stall. He wrote, "rock out with your cock out." I guess that’s a sign of our appreciation. Sayonara!
at October 22, 2011 No comments:

I've been too busy to update, sew, or photograph any new outfits lately due to working on my Culture Blog.

This Thursday, we celebrated our anniversary at the Beast. I wore a lace dress that was part of my Spring Collection, and a bunch of antique jewelry.

Dinner, Photographs, and over one year of happiness are all thanks to the charming and handsome JH.
at October 22, 2011 No comments:

Ok, I admit it's a bit creepy to photograph strangers without their knowledge, but...well...fuck it. This is my way of covertly documenting  the awesome fashion I saw on the streets in Scandinavia. 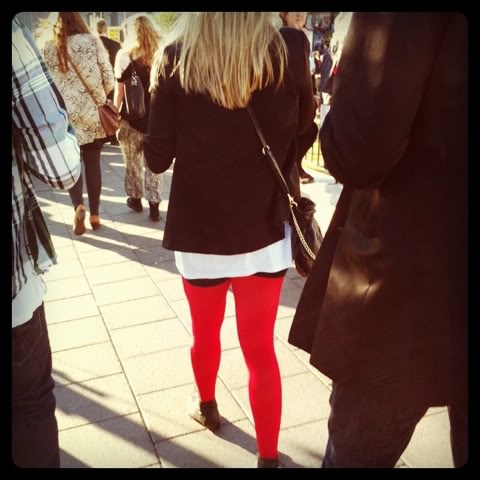 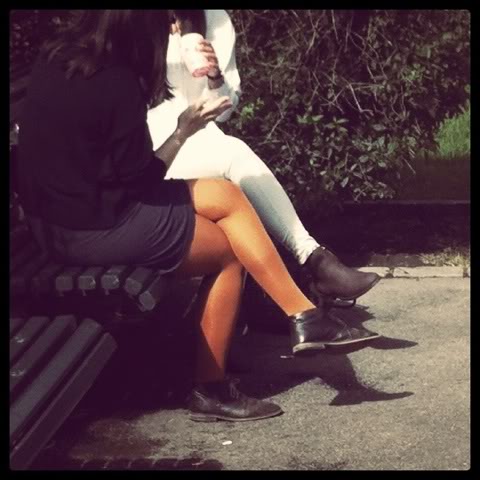 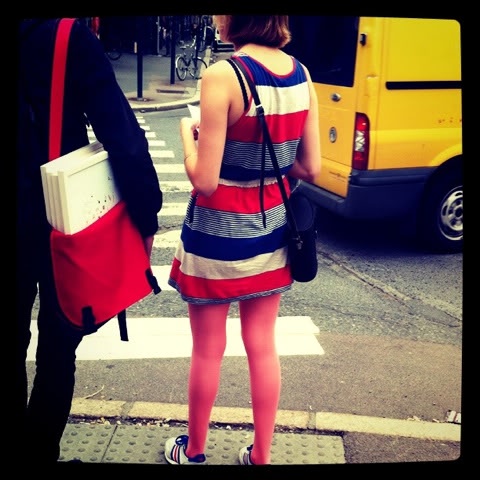 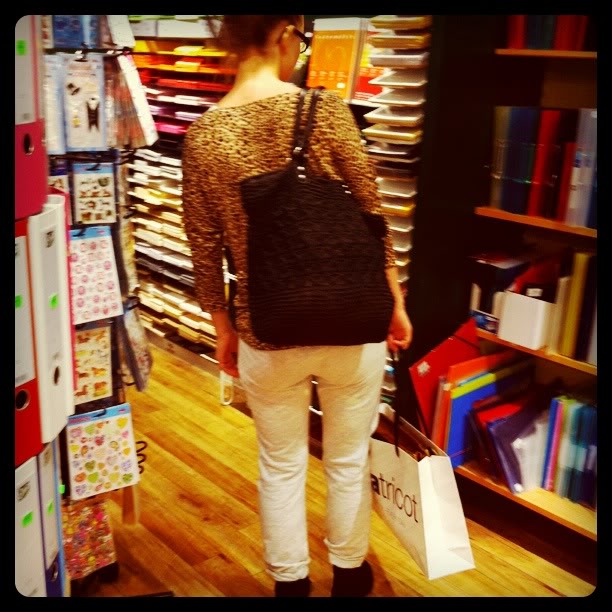 Fur in the rain. Oslo. 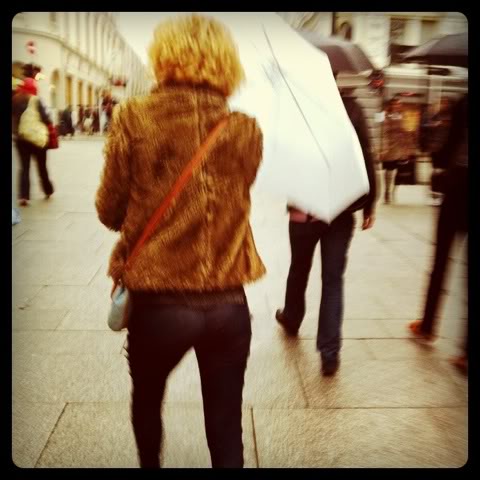 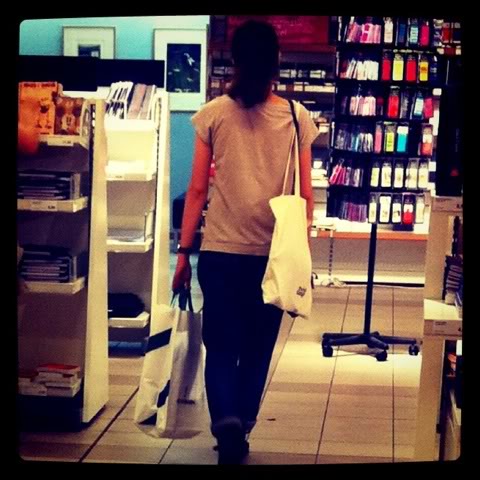 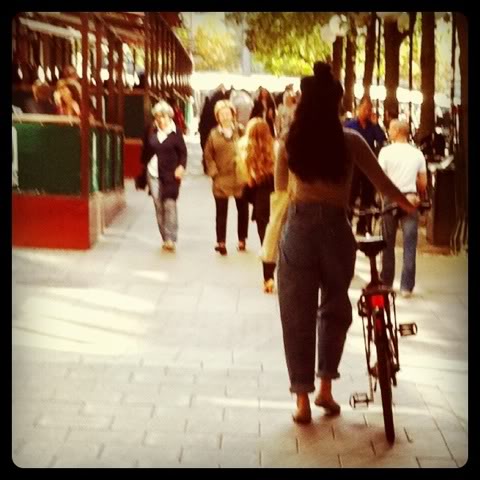 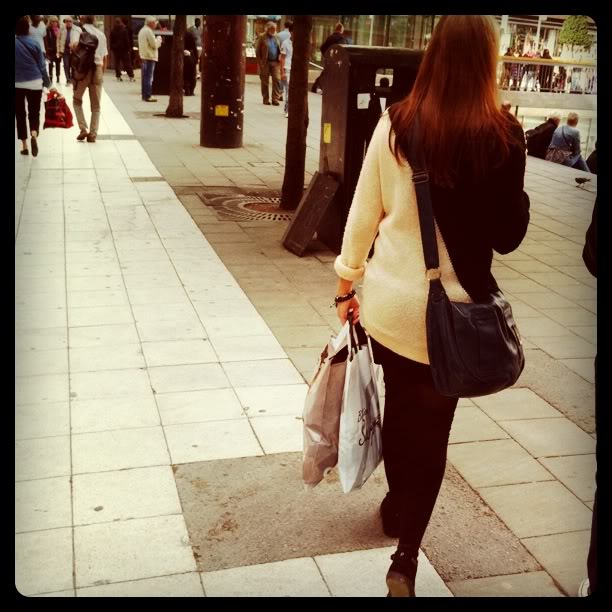 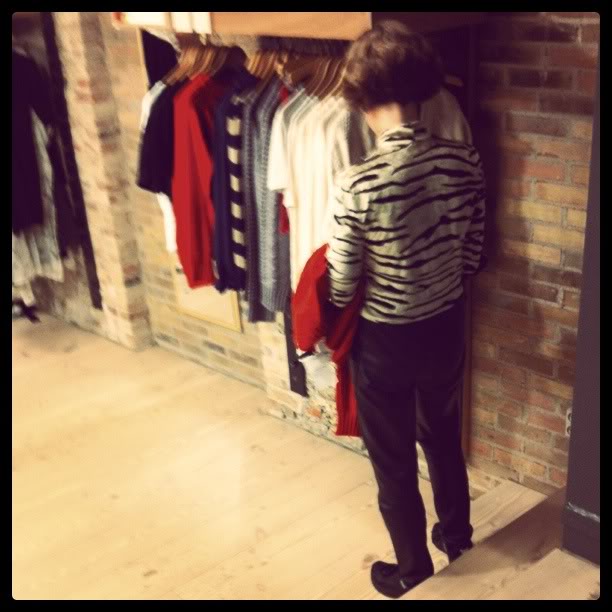 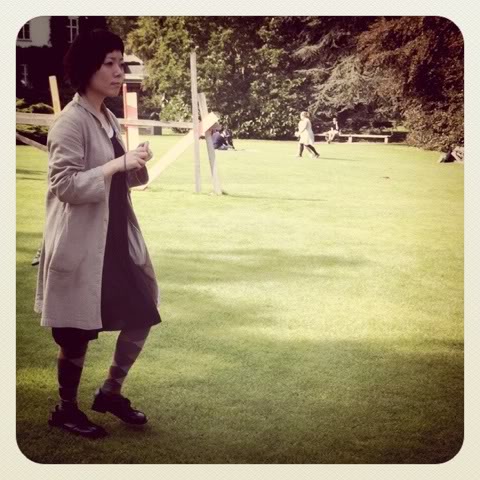 We're about halfway through winter in Portland, and dining outside remains miserable. I have passed time dreaming of elaborate picnics a...