I didn't go out at all for the first 6 months of quarantine.

I had been prepared for two weeks. That's what I thought "quarantine" meant. But then two weeks became months and months became infinity, and when I heard about a new outdoor cocktail bar opening up that serves Pina Coladas in whole pineapples, I went right for it!

I got together we a good friend I had not seen since December. We were supposed to meet at our favorite bar in March to catch up on my recent trip to Ethiopia, but the bars shut down one week before our scheduled date. We waited and waited and waited for some kind of re-emergence, and our opportunity finally came when we met at Tropicale in August.

It was a glorious summer day, the kind of Portland summers one looks forward to all year. And when we arrived at the bar it was 4:00pm on a Thursday and there was hardly anyone in line and plenty of tables open. (The same could not be said when we left at 6:00pm - the line of 30+ people stretched around the block and folks had to drink their cocktails standing for lack of seating).

Of course I had to order the Pina Colada in the whole pineapple, which was amazing and thankfully not too strong. I also ordered a spicy margarita which is my new favorite drink in the whole world. When I decided I still had not drank enough, I went back in line and ordered a Negrete - which is basically a Negroni with Mezcal, two of my other favorite things.

This was the first time since the pandemic started that I ate in public, drank in public, saw something who I wasn't related to, and otherwise felt like a normal human being. I will forever remember this glorious day for the feeling of freedom and gratitude it inspired.

New Normal: Coffee in the Quarentine

Heart on East Burnside was always one of my favorite cafes. They had a large table against the wall that was always my favorite spot to sit if I was going there with my laptop.

They closed down for months when the pandemic came, and when they reopened it was a totally different experience. Heart was the first cafe I went to in June after the Governor of Oregon allowed us to reopen in Phase 1, and I was pretty shocked by how empty and sterile it felt. I have since been to numerous cafes that still managed to maintain a cozy and relaxed atmosphere while adhering to sanitation guidelines, but documenting the vibe at Heart will serve to remind me fo this strange time we are living in.

When businesses began to shut down in the USA in March of 2020, I had no idea how long and how hard the road ahead would be. Now it is October, and already two seasons, spring and summer, have passed in semi-quarantine. Back in March it seemed that all of the world was on lockdown, but as the months passed it quickly became clear that each continent and country would take its own course.

The USA has been the worst example of how to conduct itself during a pandemic. Because we never really went on lockdown the virus continued spreading, and we did not see a decline in cases such as was Europe and Asia experienced.

But this is not a post about pandemics or politics.

Specifically, how some Portland businesses have been able to shift, pivot, innovate, and thrive in the restrictions and limitations brought on by this new era.

I almost never write about my daily life in Portland, Oregon. But this blog is about cataloging cultural experiences, what better time to write about Portland than 2020, when Portland is undergoing profound cultural shifts that even I cannot recognize.

Pix Patisserie is one of those Portland staples that has been around since I moved here 12 years ago. I loved dining alone in their original location and watching film screenings on Friday nights. But as Pix grew, then consolidated into one location that was half Spanish tapas bar and half French patisserie. The vibe of the new location felt too pretentious for me, and so I stopped going to Pix.

But once the pandemic shut down most restaurants and bars in Portland, Pix decided to get creative with its sales.

Many of this scrumptious cakes, macaroons, and treats are now served through a self-service vending machine.

The machine is card-only and the prices are not any cheaper than in store, but I enjoyed being able to get Pix cakes without dealing with the pretentious vibe and enjoy them in my own home.

New Normal: I'm so Bored...Cheese Board that is

Like many people locked up inside during this difficult period, I am doing the best I can to make life at home interesting. One way this has... 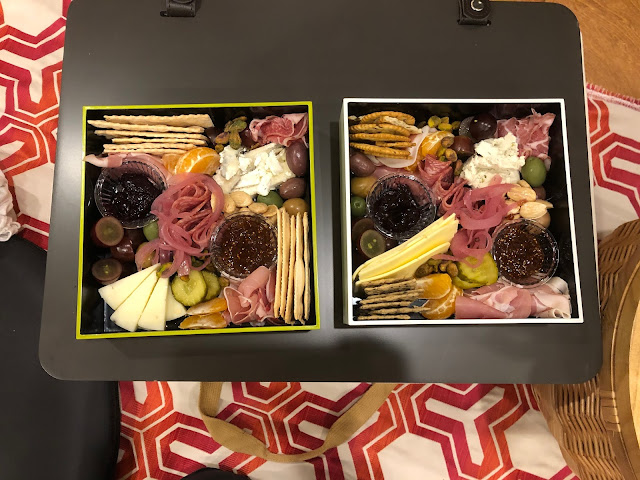