Journey to Izumo: The Taisha


The journey to Japan's oldest and most famous shrine  actually began in 2009, when I was enrolled in a college course on Japanese culture. My professor was a Japanese woman with an exceedingly rare 5-syllable family name. She also grew up in Shimane prefecture, a place she described as being so rural that even some Japanese people can't find it on a map. "Eh? Shimane ken?"

I had a similar experience when I went to Ehime-ken (prefecture) on the island of Shikoku. No Japanese friend of mine could seem to say the word "Ehime" without adding a question mark to the end of it.

Anyway, back to Izumo. So, my professor described growing up in the lovely and rural Shimane prefecture which lines the northwest coast on Honshu (the main island), just opposite the more famous Hiroshima prefecture (which contains, not surprisingly, Hiroshima city). Shimane, despite being so very close to one of the most famous regions of Japan, is surprisingly lacking of tourists, both foreign and Japanese. I saw not one non-Asian person in all of my time in Shimane...which was only three days but hey.


So this professor of mine, wih the 5-syllable family name, apparently grew up in this little-known town called Izumo. One day in class, she casually mentioned a small detail about her home town, and this little speech marks the exact moment of the start of my journey.

Izumo city is home to the Izumo Taisha, one of the oldest shrine's in  Japan. All shinto shrines in Japan house a god. The gods all have designations, like god of war, god of the sea, god of wisdom, etc.


The god at Izumo Taisha happens to be the god of marriage.

For this reason, many people, both single and newly married, make the pilgrimage to Izumo to wish for a partner and successful marriage.

When I heard this story I made up my mind that I would go to Izumo during Kamiarizuki.
I wanted to make the pilgrimage to wish for love in the presence of 8 millions gods.
I wanted all the gods to hear my wish.

Now, I'm not a superstitious woman, but I figured that if I hedge my bets right something good is bound to happen.
Let's say the god at Izumo is too busy to deal with my wish, well, I just sent the request to 8 million of his buddies, so someone has got to come through.

Some interesting facts about Shinto shrines:

At most shinto shrines, it is customary for one to step up in front of the shrine, (throw in a bit of money), and clap twice to awaken the god(s).
At Izumo, a person must clap four times, instead of twice.
Two times for oneself.
Two times for one's current or future partner.

Also, when you approach the shrine itself, don't expect to see some ornate sculpture or elaborate image of the god (-that's Taoism). At a Shinto shrine you are greeted only with the image of an opaque bamboo screen. The god is supposedly on the other side of the screen, but you can't see him. Instead, you are supposed to envision whatever you envision. It is meant to be a personal interpretation of the god. You decide what is on the other side of the screen.

Although I read Japanese, I had a lot of difficulty interpreting my fortune. This can mean that either the Omikuji is written in an eloquant but abstract way, or that I'm just a little dumb.
After reading it, (and thinking it was bad), I asked one of the shrine attendants  to confirm if it was bad. She said it was, so I tied it to the fence

The final part of the process, after making your offering to the gods, and receiving your omikuji, is to make your ema, which is your wish. The ema are small wooden plaques that you buy and then promptly leave at the shrine, never to see again. This is the way the gods receive your message.

I bought the ema for good marriage, and I wrote a bilingual wish on it, in Japanese and English. Japanese because the gods are Japanese, and English because my Japanese sucks.

After I hung up my ema some people people came to look at it and said they never saw a bilingual ema before.
They also said they didn't think the gods spoke English.
I told them that surely the gods know English, because you can't underestimate the gods' ability to adapt to the fast-paced changes of globalization.
Except that I don't know how to say any of that in Japanese.
So I smiled and nodded. 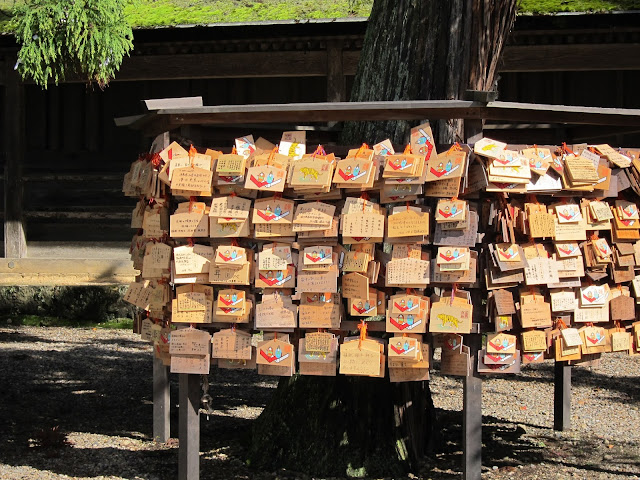 From a classroom in Portland to the coast of Honshu, if it was not for a certain professor and her life story, I would never have even thought to visit the Izumo Taisha. Funny how things happen like that. The circumstances made this trip so much more special than if I had just picked the destination out of a travel book.

Let's conclude with a recap from start to finish: 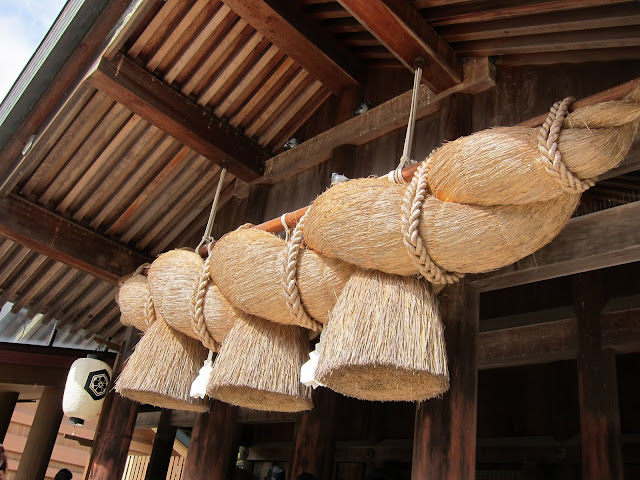