From Frenzy to First Class

I was feeling good the morning I left for Taipei. Well, as good as a chronic sleep-lover can feel after waking up at 5:00 am for an 8:00 am flight. The city was bathed in faint blue light, and while I rode the bus to Taoyuan International Airport, I watched the sun slowly peek over the mountains of green forest. The journey home had begun.

I arrived in the Taoyuan airport with plenty of time on my hands. I was about to board a flight from Taipei to Tokyo, and then a connecting one to the US at 8:00 am, or so I thought. There appeared to be no 8:00 am flight on the Departures screen, and it seemed the soonest flight to Tokyo on my airline was at 1:00 pm, which had to be a mistake. So I took the third place in line at the check-in counter to see what was going on. The two families in front of me where also checking in for the 8:00 flight, and seemed to be confused as well.

The first customer in line, a middle-aged Chinese woman and her husband, starts speaking to an agent in Chinese. I only catch words and phrases, but suddenly the tone of the conversation changes. Something it terribly wrong. Our flight, it seems, was delay 5 hours.

By the time this message reached me, I had been in line for a half hour, and behind me there were at least one hundred people. After an hour passed I hadn’t moved in inch. There was only one staff behind the counter, and the middle-aged Chinese woman and her husband were still there. In Tokyo they were supposed to catch flight to Washington DC, which they would miss because of the delay, but the staff in Taoyuan insisted that they could not put them on a earlier flight to Tokyo, or change their flight to DC. They could not guarantee that there would be a later flight to DC, or that they would be able to provide accommodation in Tokyo. This meant that we would probably all miss our connecting flights out of Tokyo, would probably not be able to leave until the next day, and would be given no accommodations, meaning that we would spend the night in Tokyo airport.

My flight was for sure the last one to Seattle that day. If I missed it I would no doubt be spending the night in the airport. After another half hour of no movement, a second staff member got behind the counter, and a 20-something-year-old, on her way to Houston, stepped up. Based on the conversation she had with the staff, or at least what I could overhear in Chinese an English, some disturbing facts emerge:

I stepped up to the counter at this point to intervene. First of all, how could they be so careless to not inform passengers of the delay, prior to that morning? And how the hell did they think it would be ok to just delay everyone 5 hours? I understand that the weather can’t be helped, but if they knew about it so far in advance they should have had something worked out before we even got to the airport that morning. And fine, so they can’t book flights outside of Taoyuan. Makes sense. They can’t help me with my flight from Tokyo to Seattle any more than they can help me with a flight from Mumbai to Auckland. But for the love of god, get me to Tokyo, and get me there before 1:00 pm please.

Arguing turned to shouting, and a multilingual riot broke out. The line dissolved as customers behind me rushed to the counter, frantically trying to resolve their connecting flights. People were pushing, yelling, and shoving. It was total chaos.

At that point I did the only thing I could do. Sat on my suitcase and started crying. It wasn’t a bitter, Hollywood-cinema style crying, more like a I’ve-been-up-since-5:00 am-and-waiting-in-line-for-two-hours-only-to-be-told-that-I’ll-be-spening-the-night-in-the-airport crying. Right there in front of god, the airport staff, and a good number of Taiwanese people.

The airport lady stared at her screen for a few minutes, like waiting for a fortune telling from an oracle, then she stepped out from behind the counter, approached me and said,

We zipped through the crown and over to Delta.  The Delta lady took my passport, handed me a boarding pass.

“You can walk fast.” She asked. There wasn’t really a question mark in the tone of her voice, but since I hadn’t displayed for her my fast-walking abilities, I assumed it was a question.

“Your flight leaves in 15 minutes.”

Boarding pass in hand I zip through security, clear immigration, and run down the airport terminal like it’s about to explode behind me. Um, isn’t this was I did on my way from the states to Tokyo?

No matter, when I got on the Delta plane I was last one to board. When the flight attended led me upstairs to the first class area I assumed there had been some kind of mistake. But then she checks my ticket and says, “Red wine, white wine, or champagne?”

So there I was, just minutes after my ordeal, on board a first class double-decker jet, fully reclined in my seat, with some bubbly in hand. The fact that the situation went from chaos to “champagne please” was laughable at best, and seemed entirely absurd. 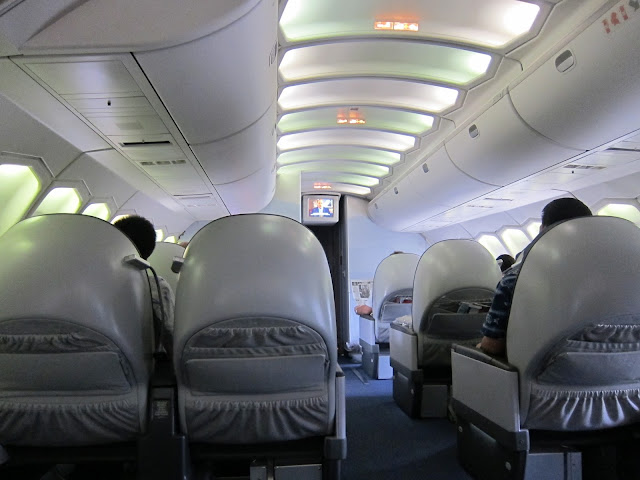 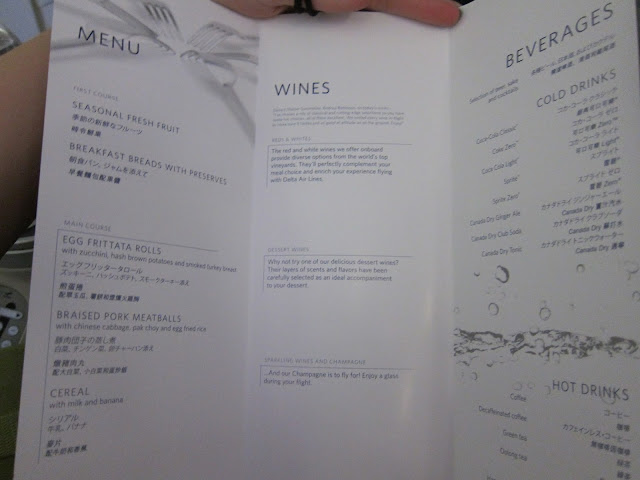