An Idealist in Islamabad 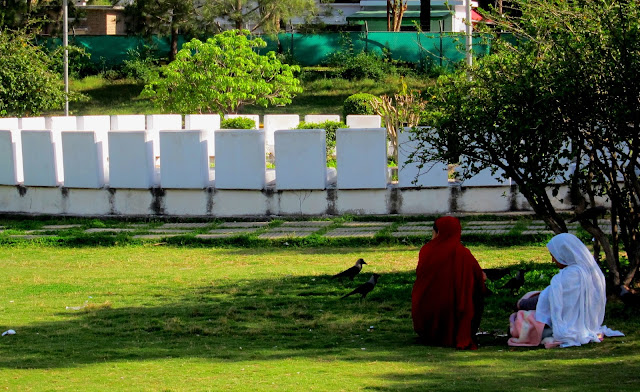 Just outside the Faisal Mosque, I meet a young, outspoken poet who was the son of a Karachi father and a Pashtun mother. My friend,  a globe-trotting , NGO-working, peace activist introduced us. There, in the sunlit gardens of the largest mosque in Pakistan, I chatted with two of the country's young dreamers.

What was little more than a mountainous terrain half a century ago became the capital of Pakistan in just a few short years.
Construction broke in 1960. Fifty years later, I’m walked in the quiet gardens of the Faisal Mosque.

In the daylight, the peaks of mountains would be illuminated, but at night the backdrop is patterned with stars out to the horizon. I haven’t seen such a sky since I went camping in the hills of west Texas when I was fourteen years old. I didn’t know that the next time I would behold such a scene would be from a rooftop in Islamabad.
Such uncertainties are worth living to discover.

The next day we walked down the wide paved roads only dreamers could imagine, we ate quesadillas in cafes and drank juice from street vendors that only the dreamers could have dreamed. And in the parking lot of a pizza restaurant we met the birdcage man.

He crouches over on a curb in the parking lot.
Rubber sandals worn down to the sole, dirty toes hanging over the edges. His face hides behind a wiry beard.
At each end of a long stick he carries two small wire cages, hundreds of birds squeezed to the rims, their tiny heads poking out between the wires, gasping for freedom.

He is selling the birds, but not to keep. When a patron pays him sixty rupees, he will release one lucky bird into the open sky.

We can feel free too, watching this bird fly away from its captor, who is now sixty rupees richer.

The birdcage man is a dreamer, living in a city of dreams. But he doesn’t live the dream others do.
He stares out at them through his cage, nor more free than the birds he carries.

This scene is one of the many juxtapositions I witnessed in Pakistan, where the lives of the rich and poor intersect. Change comes at the hands of the privileged elite, but  I take comfort in knowing that some of these elite are people like my friends.  People with education, interests, ambitions. People who live and breath peace, tolerance,  and equality.
People with dreams.