My Pakistan Diaries: the party is over but the fun doesn't end


In March of 2013, I was invited to attend a wedding in Pakistan. I spent two  weeks in Karachi, Hyderabad, Lahore, and Islamabad. This is the account of my real experience there.  Out of respect for the privacy of my friends, I have not named anyone, and I will not be posting pictures of their faces, or providing details which may reveal their identities or locations. Read more about my diaries here.

The morning after the wedding I expected to be woken earlier, since the eldest cousin had told me that I would be getting dropped off at the groom's house before noon. “These girls have to get back to their families,” he said. I should have known by now that everything happens three hours late. After naturally arising at 1:30pm, I knew that things were going to move slowly.
I didn’t fight it. I got up, slowly packed my suitcase, changed into another shalwar kameez, and entertained myself by doing exercises in the bedroom.
I didn’t bother looking at the clock or trying to leave earlier.
It was futile.
We would leave when it was time.
I did sit ups and isometric exercises on the carpet in the gaudy pink bedroom. The older women napped on the bed, and the children played with each other.
When we left at 4:30, nearly three hours after I had woken up, it was not for the groom's house, but for the Indus hotel, where bride and groom had spent the night. I was surprised to see that their hotel room resembled an American one, with all the same amenities, including a refrigerator stocked with sodas.
The bride was wearing a beautiful dress.She told me that after the wedding, the bride must only wear new clothes and jewelry. Everything she wore on her body that day was new.

I drank orange soda and ate nuts from the coffee table and sat on the bed trying to get the internet to work. The hotel room had a computer with a keyboard in Urdu, but I could get onto the internet. Predictably the power went out for a few seconds while we waiting in their hotel room. The room was crowded with relatives. The bride and groom told me that they had their photographs taken in their hotel room after we had left the wedding venue, and that they were up until 10:00am or so. They were tired, they wanted to go back to the groom's house and sleep, but if they were at all irritated or fatigued, it didn’t show.
From the hotel I rode in the groom's car to his house to arrive at 6:00 pm.
The wedding rituals began as soon as we entered the house, or more specifically, as soon as the bride entered the house. It was seven pm. A red string was tied around her wrist and she was lead into the home, over the threshold, as a member of the family. In more traditional circles, this ceremony would have marked the beginning of her living in this house, with the groom's family. Instead, this ceremony only served the purpose of tradition. The bride and groom would be returning to America in less than a week, where they had already been living together in secret.
I watched as the bride and her new sisiter-in-law sat on the living room floor, and scooped rice with alternating hands. I scooped the rice in one hand, poured the grains into the sister-in-law's hand, and she poured it back in to mine. We repeat the process again and again. Every person in the room does this with both brides. I watched with exhausted eyes. 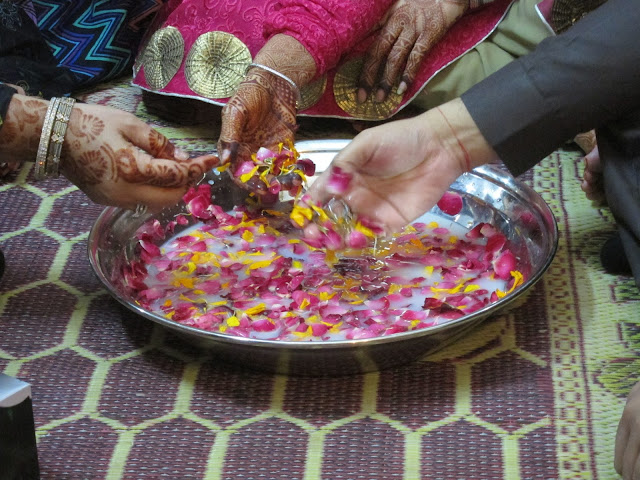 At seven-thirty the groom offered me his brother’s bedroom to nap. It was the finest room in the house and I should have refused but I was so excited to sleep on a real bed for the first time in days that I readily accepted. It was the first time since coming to Hyderabad that I had a bed, in a dark room, and with a ceiling fan. I was asleep almost instantly.
At 11:00 pm I awoke. I had been napping for over three hours. Only twice did I hear the faint sound of someone, probably one of the bride's sister-in-laws, come into the room and rustle a few clothes around. Apart from that I had been left alone in that sweet darkness and I was thrilled.
When I entered the living room, the family immediately suggested that we leave for dinner.
Apparently they had been waiting for me to wake up.
Normally I would have felt guilty for keeping them waiting so long while napping, but I was too grateful to feel guilt. I was only curious about what kind of restaurant is open at 11:00 pm.
We took two cars and drove to BarBQ Tonight.

We arrived at midnight, but the restaurant was lit up and lively with people. I remember thinking how appropriate it was that they added the word “Tonight” in their name. the wait staff had to move three long tables together to seat us. We were banquet style, all fifteen of us. The family mostly ordered bread and meat, but since I was sick of meat by now and craving vegetables, I got to select one dish, Palak Paneer. I was disappointed that it was pureed like baby food, and very spicy. The taste did not suit me at all, but I ate it with gratitude. It was the first time I had been to a restaurant in Pakistan. I was relieved to have the things I took for granted in the U.S.: waiters catering to my every need, a clean environment to eat in, and utensils. After eating with my hands for a week, I almost forgot what to do with the spoon and fork beside me.
As to be expected, it was a banquet style feast that lasted until 2:30 am, long after the restaurant closed. We were the last customers to leave.


At home, the groom's older brother and father sat in his bedroom and counted the money they had received from guests at the wedding. His father recorded everything in a  notebook. The groom's brother told me that they recorded everything so that they knew exactly how much to give to these people at their weddings. You don’t want to give to much or too little. Money stayed within the circle. Rather than being a gift, it was more like a loan. When it came time for the family of the giver to get married, the family of the received would return the exact amount.
When it was time to sleep, I was so excited to be back in that dark bedroom alone,  no one seemed to have any idea which bed I would end up sleeping in.  After some shuffling around and discussions, I needed up in the bed with the bride and groom. We slept there like three siblings, and I apologized profusely that they were not able to have a romantic night alone. It’s ok, it’s ok, they said.