My Trip to the Museum of Jurassic Technology, Los Angeles, CA 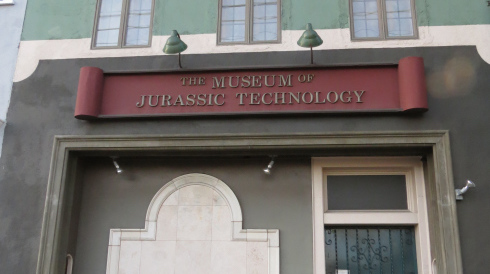 Recently I met up with an old friend, who insisted that my trip to LA not conclude without a visit to the Museum of Jurassic Technology. He raved about the place, but wouldn’t tell me anything about it. “Don’t look anything up online,” he said, “Just go.”


I trusted his recommendation enough to take a chance, and a $10 uber ride from Koreatown to the un-glamorous Culver City.

From the outside the museum is unassuming, even disappointing. It looks like it could barely be bigger than an apartment. I had no expectations, but was suspecting that it might be a gag or hoax museum. Upon entering, I was saddened to find that no photography was prohibited. I respect the rules so I didn’t take any pictures, instead I doodled and furiously scribbled notes into a book so that I could describe all the details of this strange place.

When walking in one is greeted by a miniature replica of Noah’s arch. Ah, I thought, a religious/creationist/biblical literalist museum. But then things got stranger. Visitors are soon greeted by what look like fetus in jars of formaldehyde, but fear not, they are actually globes of water with floating wax figures that are supposed to predict the future depending on the direction the ax figure points after being shaken. Like a magic 8 ball.

Few things are more terrifying than being alone in the room with the Bell Wheel. A room so dark, I could not even see what I was writing as I furiously scribbled notes on a notepad. The loud cacophony of chimes ringing above me, in a room in which only the plants in each of the four corners were illuminated by light.


In that room, one can find such exhibits like. “Why the tower could not reach the moon” which explains that the tower of Babel would have needed to be 178,672 miles long to reach the room, which would have been so disproportionate to the size of the earth that “the uneven distribution of the earth’s mass would tip the balance of the planet and move it from it’s position in the center of the universe.”


The text was accompanied by a visual of a Styrofoam planet with what appeared to be a unicorn horn affixed to it.


The same room also offers dioramas form the lives of saints, in which holographic images of saints are juxtaposed form clouds made of cotton balls. At first the diorama appears empty, and only when looking through a lens  does the cartoonish figure appear in the scene. A miracle.


Another scene portrays “the first century C.R. Roman general and his conversion while hunting via a miraculous vision of the crucifix between the antlers of a stag.”

Videos housed in podiums with uncomfortable seats are obnoxiously cliché and almost impossible to watch. If the video is about a person in Scotland, Scottish bagpipes will play. In a video about the life of Hagop Sandadjian, a micro miniature sculptor who was born in Egypt, middle eastern music can be heard in the room “Eye of the Needle” which is dedicated to his word.


Another room displays unremarkable dishwear, dresses, and lace dollies that look as if there were thrown out by Goodwill. All items are awkwardly arranged in glass coffins, while the walls tell of the history of trailer home manufactures. At this point, my view shifted from that of a religious museum to a collection of oddities, that is, until, I entered the room of old remedies, none of which, I'm sure, ever actually existed. A sculpture of a duck’s bill inserted into a child’s mouth is supposed to illustrate that breathing a duck’s breath will heal mouth and throat illnesses. A toast with two dead mice on it claims to help cure bed wetting if eaten. Mouse pie was also supposedly given to children who stammer. Other absurd ideas, likely the product of the imagination of the curator, can all be viewed to the tune of Mozart’s requiem, played over a recording of a storm. Is that supposed to be ominous.


Other rooms pretend to display pseudo-scientific charts and instructions, neither of which is possible to understand.

One wall offers a collection on tobacco pipes juxtaposed against quotes from famous people, about, guess what? Tobacco pipes. When walking up stairs there are portraits on the wall of, guess what? Stairs. The first room on the right is dedicated solely to the Cat’s Cradle. The most useless pastime in the history of the earth, which involves twisting rope between the fingers in a variety of ways. The very fact that there existed a real person, by the name of Honor Maude, who devoted her entire life to documenting all the possibilities of Oceanic String Figures – as they are called – hopelessly depresses me. After 6 weeks in Nauru she gathered methods of 107 string figures. And amassed over 1,00 figures in the course of her lifetime. The result of her life’s work: apparently there are many ways to ties strings which differ all over the world. Who would have thought? The rooms dedicated to her show at least 17 different versions of Cats Cradle with instructional videos.


And just as I was getting annoyed and frustrated by this obnoxious museum and its bullshit displays, we entered a room with oil portraits of dogs and a small teahouse, apparently a scaled down version of the czar’s tea house in his winter mansion in St. Petersburg. After being offered  tea and cookies (they were technically free but I paid for them with my sanity and time wasted) we followed the sound of what I thought was a violin and wandered into a beautiful rooftop garden, where we saw a man playing a stringed instrument with keys like an accordion. It’s called a nyckelharpa.  Since I could take no videos or photos of the scene I witnessed, I am inserting a youtube link of a random person playing the nyckelharpa.

Listening to the nyckelharpa on a rooftop garden at twilight was the perfect time and atmosphere to ponder the question I had since walking into the museum. “What is this place?”


There are no answers, but a lot of interpretations. My partner thinks it is a satire of all museums. The curator is presenting a critique of the authoritative tone of museums, and the gullibility of the audience. The museum wants us to question why we trust museums, and what leads us to accept, without question, their installations and inscriptions as facts. My partner loved the museum. Me, not so much. I understand the interpretation, but I think that could be archived in one small installation, not an entire two-story building. I found the museum annoying and crazy-making. It provokes too much confusion, requires too much guessing. A friend of my once wisely said, “I can´t see any charm or poetry in guessing; life is complicated enough.”
at March 21, 2016

I am a huge coffee fanatic, so imagine my excitement when I got to travel to the land from where coffee originated! That’s right, the firs...