When I was planning my trip to LA after nearly a decade hiatus, there were tow things I knew right away:

Back was I was a poor teenager trying to make it in the big city, Koreatown was my dream location. I always wanted an apartment there but could never afford it. Now a well-off working adult, I can afford to stay in one of the hundreds of airbnbs in Koreatown and pretend that my dream of living there has come true.

The other thing the intrigued me about Koreatown was the abundance of cafes, which I don't remember existing when I was there in the mid-2000s. Coffee culture has taken LA by storm since I left and now there are amazing hipster minimalists cafes all over the city. But the ones in Koreatown are a special breed. More akin to cafes in Seoul than LA, these coffee shops have several distinguishing characteristics that set them apart from my standard LA list.

2) The wifi-laptop-digital-nomad scene during the day, and the hang-out-with-a-huge-group-of-friends scene at night. Koreatown cafes morph between two worlds. The social, and the social media. During the day, most cafes are occupied by single people on laptops, but then at night they become the nightclub pre-party (or sometimes, post-party) destination. There's valet parking, waitlists for seating, music videos blaring on big screens...

3) Korean and Italian food. Many cafes offer an impressive selection of food items. Some are beloved Korean dishes like Dokkbokki, but many more offer a fine selection of pastas and cakes, catered to the Asian taste. I had some amazing sea-urchin and salmon-egg pasta dishes at several cafes.

5) Table service. Some cafes have a system in which you are seated by the host, then have table service like at a regular restaurant. I usually don't like this, but Korean servers are very laid back and don't try to hustle you out of the restaurant as soon as you finish your drink. Many places also have buttons you push to call on the servers so they don't need to check on you needlessly.

6) Ubiquitous K-pop playing in the background.

Below is a list of some of the cafes I got to visit during my last few trips to LA. There are at least two dozen more I didn't get to try, so this list is by no means complete, but it  gives a relatively broad sampling of the variety and unique appeal of Koreatown's delightful cafes.


Document
My go-to cafe in Koreatown. Designed specifically, it seems, the the college student or digital nomad, one could easily spend all day in this space. It also serves amazingly tasty and unique drinks and pastries. I always order the Document Latte (maple flavor) and almond croissant. Do enter and exit through the parking lot, to get a glimpse of their scenic garden and ivy wall (2018 update: the ivy wall is gone). 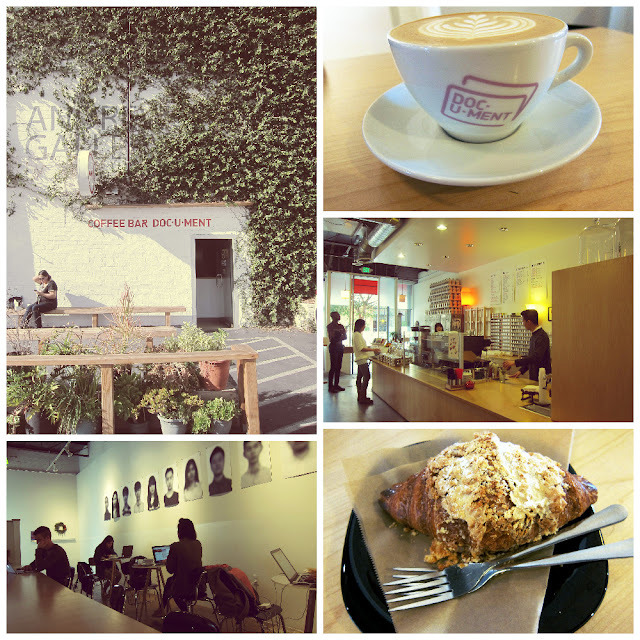 Beau Bar***2018
True to its name, Beau Bar has a beautiful aesthetic. It’s a bit contrived, but I'm sure that bothers no one but me. Beau Bar’s signature drinks is a latte that bares its name. It’s sweetened with a syrup similar to the Document latte, and the flavor was very rich. I can see what this place is popular and I do find it a unique and refreshing addition to Koreatown. 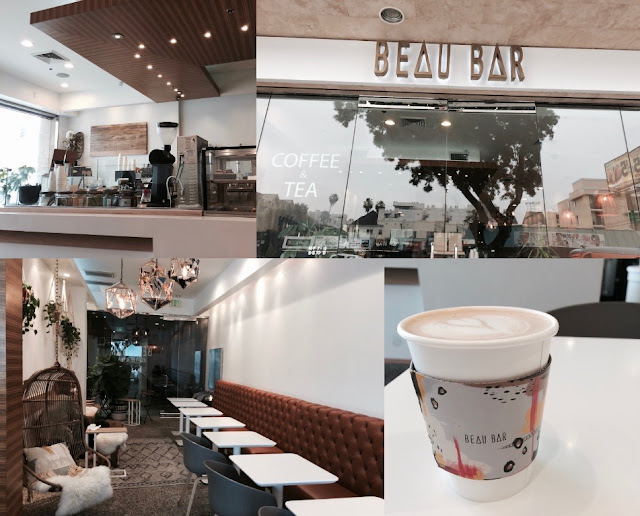 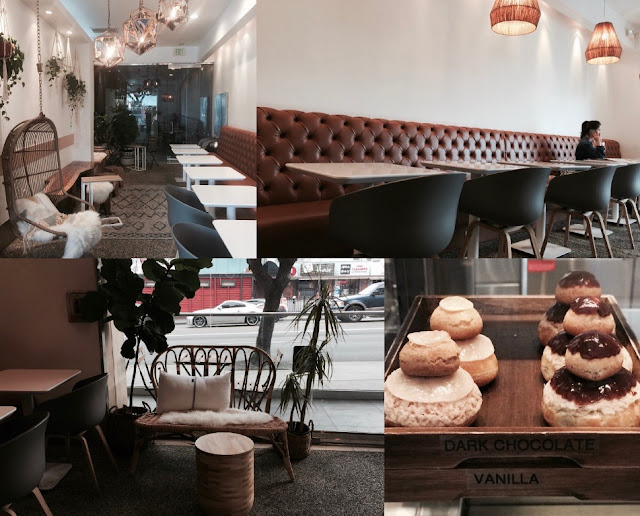 Bia Coffee does two things well: Rose and Lavender. They have infused these two flavors into practically everything they make. Most popular are the rose and lavender lattes, both of which I was able to sample hot, and one iced (lavender). Their drinks are accompanied by “real edible organic flowers” (though I didn’t eat mine) and are very Instagram-worthy. But the rose-lavender madness does not stop at their drinks; they also offer cakes, croissants, meringues, and muffins of the same two flavors. Now, as far as actually getting any real work done at Bia, that’s debatable. The interior is minimalistic and the ambiance is not as photograph-worthy as the drinks. 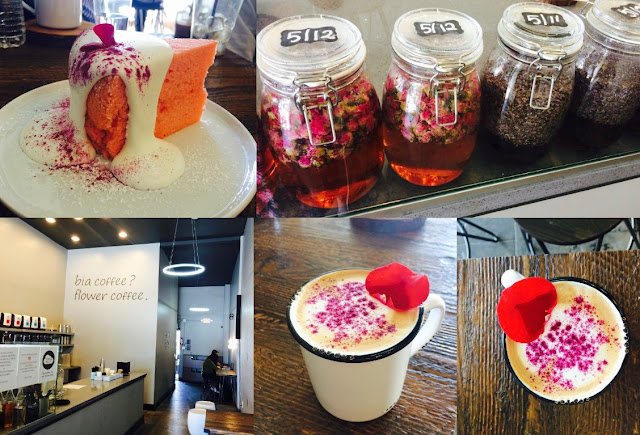 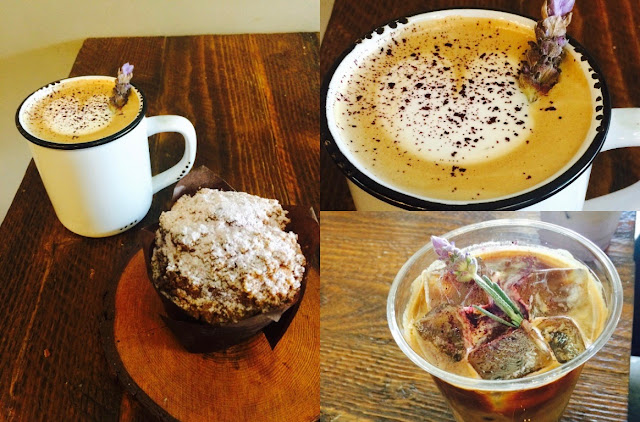 Korobokgur
This is the place where Korean colleges students come to get shit done. I could work here for hours if they were not blasting Korean pop music all day long. Don’t get me wrong, I love K-pop, but I can’t focus when the music is at nightclub volume. But somehow, everyone else could, because there was all kinds of studying going on at this place. I don’t come for the study, I come for the amazing dokkbokki and green tea latte. 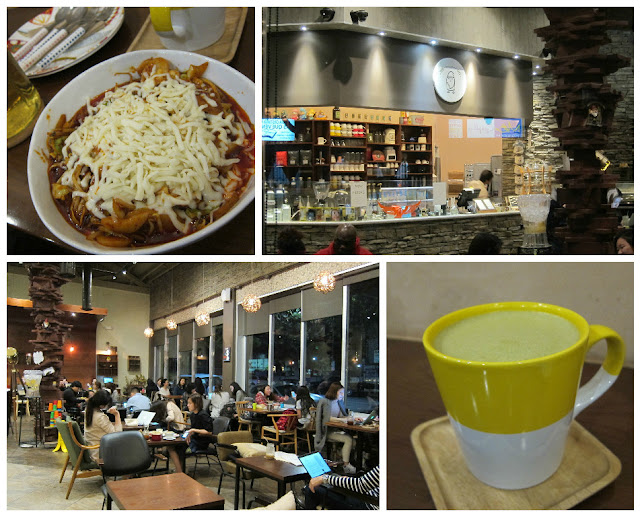 
A popular place known for it’s logo, known simple as #. They have all the Korean café specialities but do some serious roasting as well. I enjoyed both hot and iced drinks here. 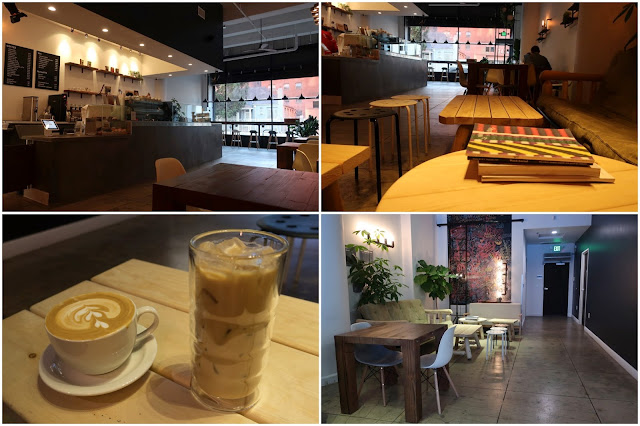 Haus by Coffee Hunter
A great place to go early. Nice ambiance, spacious booths, and delicious tarako/mentaiko spaghetti. This can feel a little too night-cluby since they are baring K-pop music videos from a giant television, but if you can ignore that, you can  really enjoy yourself. 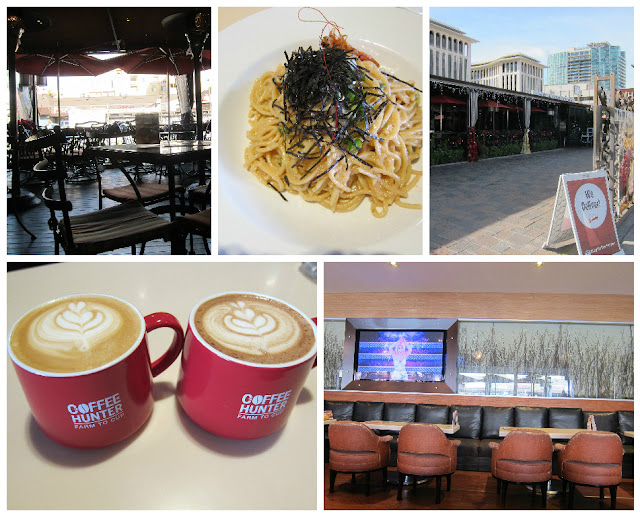 Loft Café
I had my eye on Loft cafe ever since our first trip to LA in 2015. It took two more trips before I finally went and I am so glad I did. This cafe was everything I wanted it to be. Tall ceilings, mirrors, Parisian Brasserie atmosphere, delicious cakes, elaborate drinks and relaxed music. At night it gets pretty busy, but during the early evening this is a great place to write. 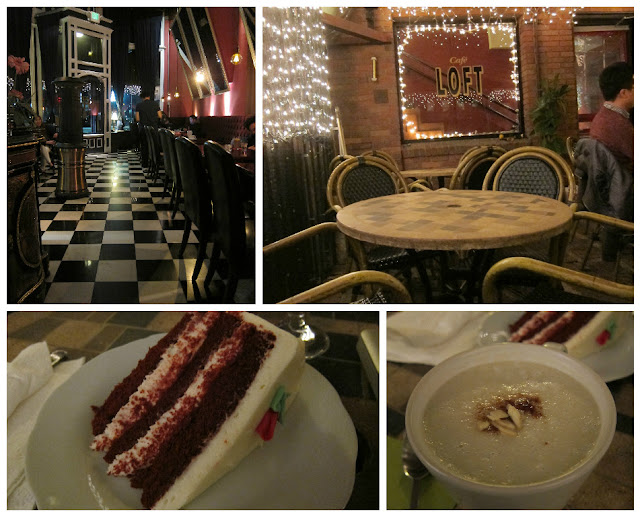 Yellow House
The best spam musubi. Beautiful outdoor patio and shaded seating. Music is calmer, still K-pop but mellow. I visited Yellow House once in the day time for lunch, and another time at night for coffee (sweet potato latte!) and long talks near the fireplace. 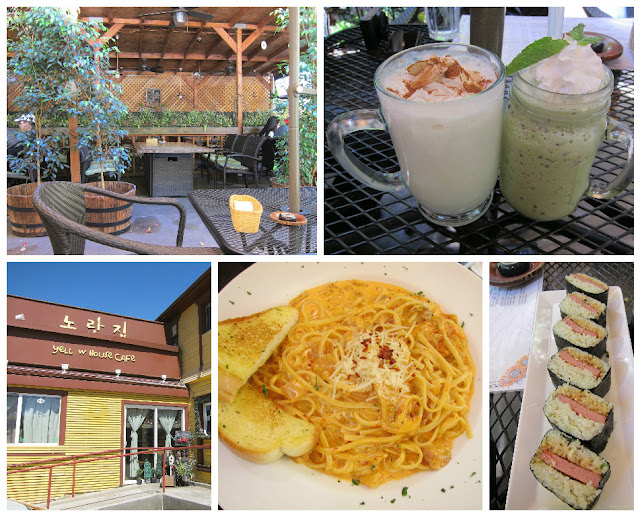 Alchemist
Another legit-coffee place in K-town. They have a few fancy drinks, but you don't go for the green-tea and sweet-potato - you go for the world-class baristas. The coffee at this place is as soon as any cafe in LA. My only issue is that at 11:00am the places is packed. Limited seating in tight quarters makes brought Alchemist down a few notches on this list. 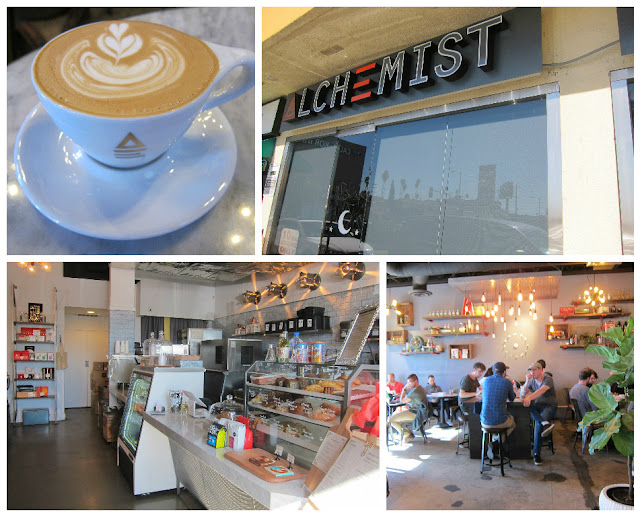 Café Concerto
This sprawling mega-plex of a cafe is interested on so many levels.  At night, it looks like a club with valet parking and rows of luxury vehicles in the lot. The interior is classy, with a large drink menu (I ordered the Yuzu-citris drink) and a significant food menu (delicious Uni pasta). 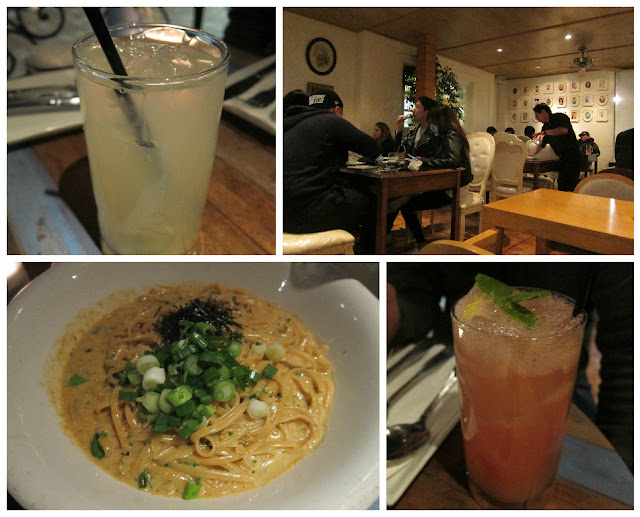 Klat
Klat is both a restaurant and cafe, with a full brunch menu and delicious drinks like Strawberry basil soda. It doesn't really fall into the same category as the other Koreatown cafes, so it stands on it's own as a nice brunch spot and potential place to write. I didn't have a chance to try coffee this time, but enjoyed my brunch at Klat. 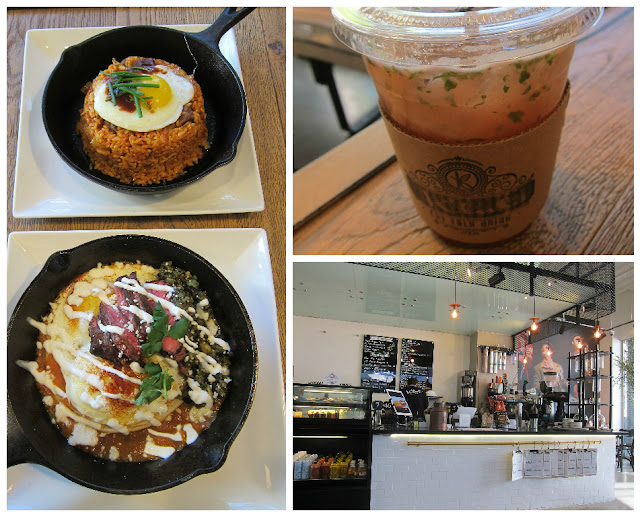 Alfred Coffee in The Line Hotel in Koreatown
Love this café in the hotel lobby concept, unfortunately the drinks were just ok, but the seating and ambiance was great. 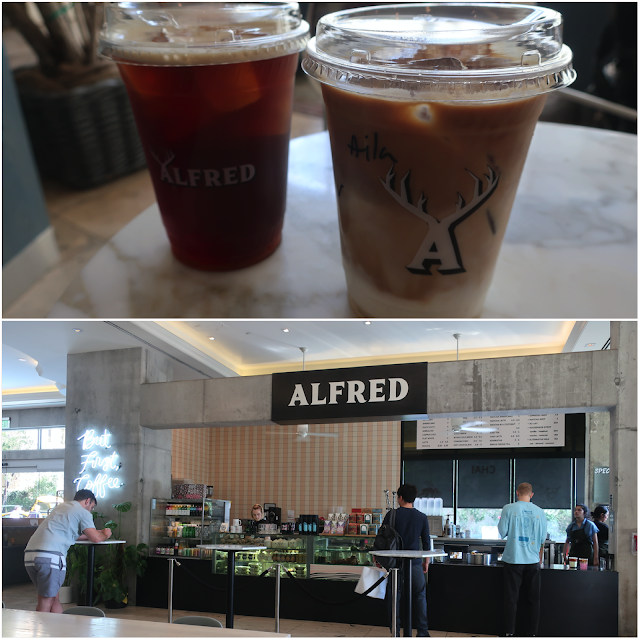 By far one of the largest cafes in Koreatown, and one of the ones I was most excited about. Located right off Wilshire, Cafebene boasts an after-dark atmosphere more similar to a nightclub than a cafe. But in the early morning it was quiet and empty. The drinks are brightly colored and sugary, with a few interesting selections like Red Velvet latte. 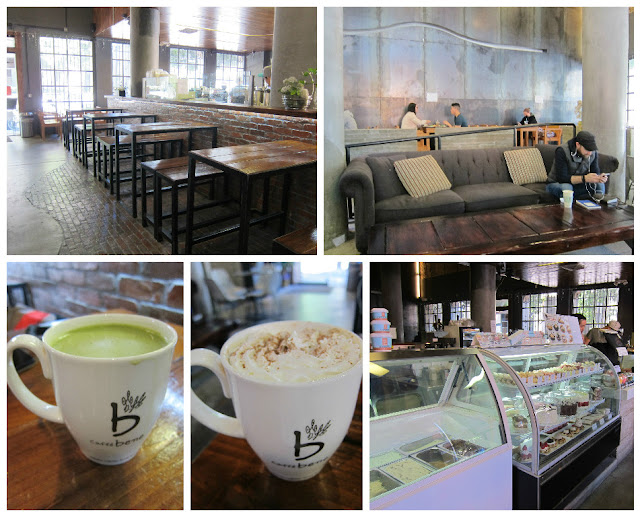 Park junk house, park antique shop, part library part wine-cellar with no wine, Cafe Mak is known for its atmosphere, not its coffee. In fact, I think it only serves coffee because they quite frankly can't charge for anything else. This arty cafe had the worst drinks in Koreatown (my iced latte was made with powdered milk...) but one of the best atmospheres. I wish there wasn't a tradeoff. 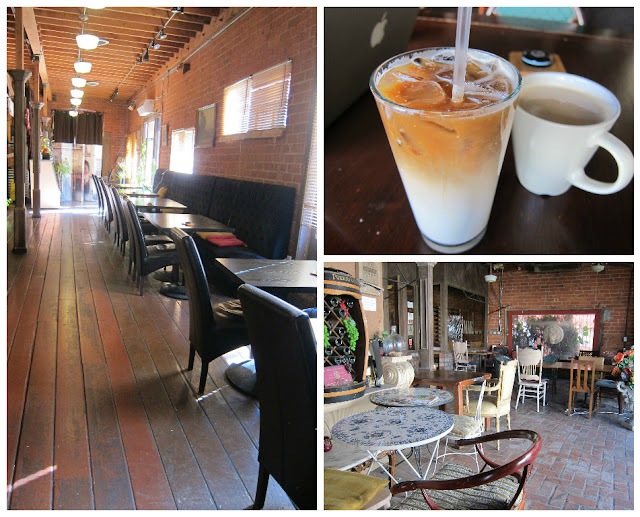 This local coffee roaster has a spacious new location in Koreatown. I happened upon it one morning and was pleased with the outcome. They offer a variety of Koreatown-esque dessert lattes, like Tiramisu Latte and Cookies and Cream Latte, but that morning I opted for a plain latte. It’s a bit of a risk in this part of town where people like their drinks sweet, but being a roaster Curiocity know how to make a good latte. 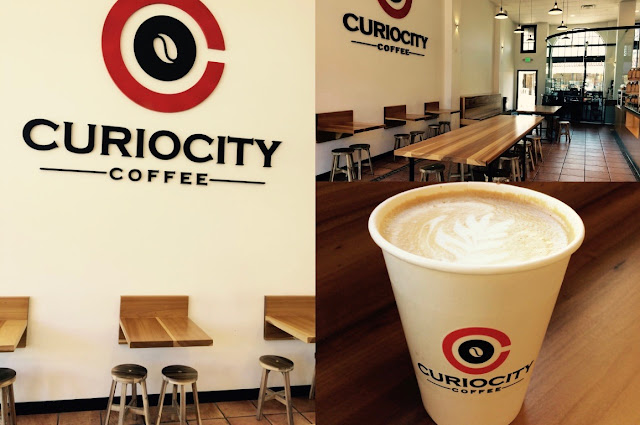 
A great quiet late night spot with large booths which are perfect for quiet conversations. I didn’t expect them to do a serious latte, so I ordered a matcha latte and was quite pleased with that. 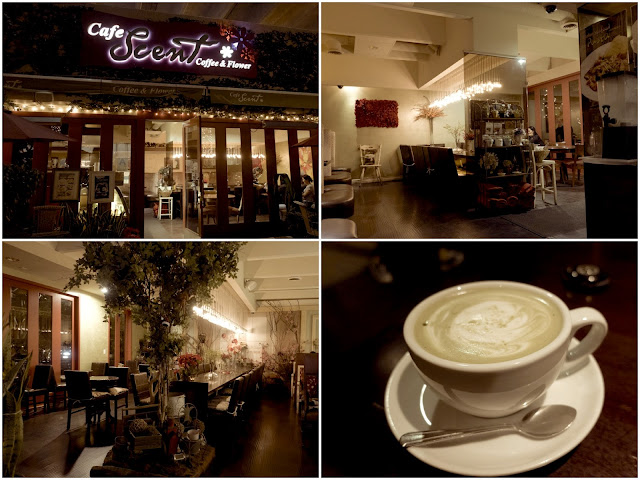 Have Some Coffee ***2018
A small but adequate café in a strip mall featuring some signature drinks and desserts. I enjoyed my iced matcha latte. 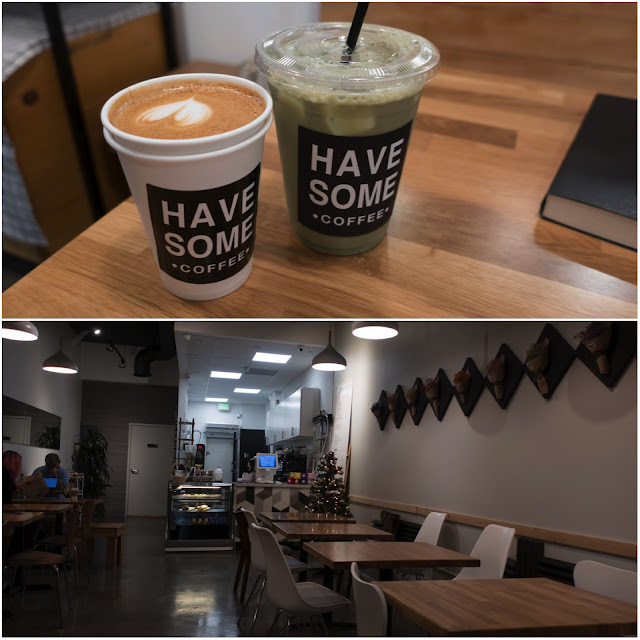 Awesome Coffee is a place I should have liked, but its at the bottom of the list for a few reasons: its unmemorable atmosphere, the most bitter Vietnamese iced coffee in the world, and the fact that they had to remake my partner's latte twice because they screwed up, and in the end it cam out just ok. It seems they are trying to find their way, but I would still like to include them in this Koreatown cafe list as an option. 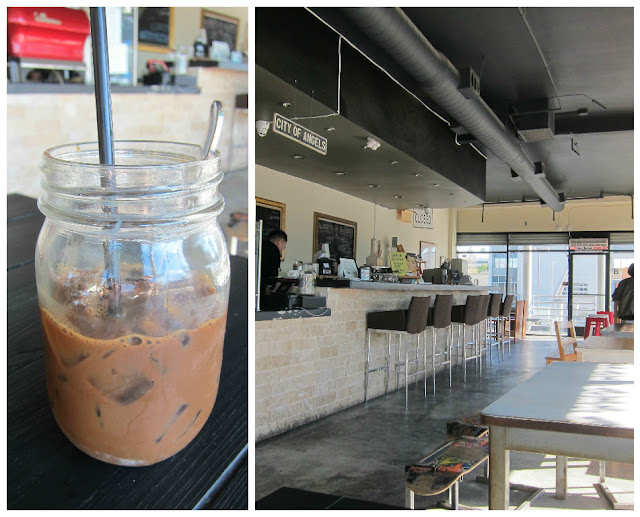