I am a huge coffee fanatic, so imagine my excitement when I got to travel to the land from where coffee originated! That’s right, the first coffee was discovered in Kafa, Ethiopia and has now grown into one of the biggest industries in the world. Ethiopia has a long culture of drinking coffee so I was excited to sample their modern cafes as well as traditional coffee ceremonies.

The common beverage of choice in almost all cafes in the Ethiopian version of a machiatto. This is a shot of espresso with a dollop of frothed milk on it. A single or small size includes one shot, and a double or large size is two shots. I mad the mistake of ordered two shots only once - it was incredibly strong!  Here are the macchiatos from three cafes, many restaurants, and one hotel.

Tomoca
Tomoca is the first cafe in Addis Ababa and now has branches all over the city. I visited one of their trendy branches near the airport in Bole, where people stand and drink their coffee while on break from work.

I also visited the original Tomoca which is very historical and a big tourist attraction. Unfortunately of all the macchiatos I tasted in Addis, I liked Tomoca’s the least. It was very black and bitter to me. 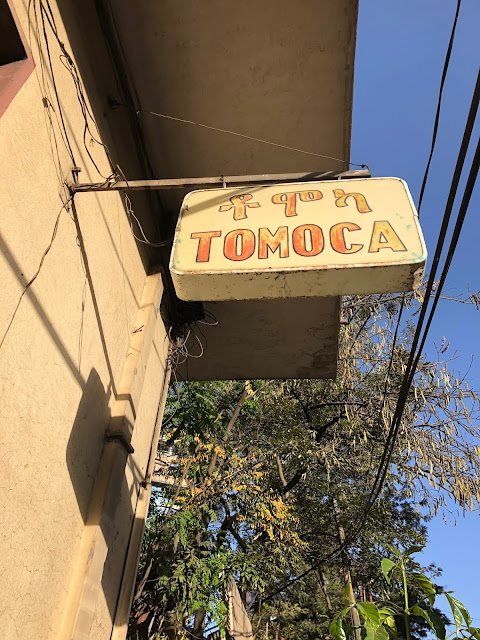 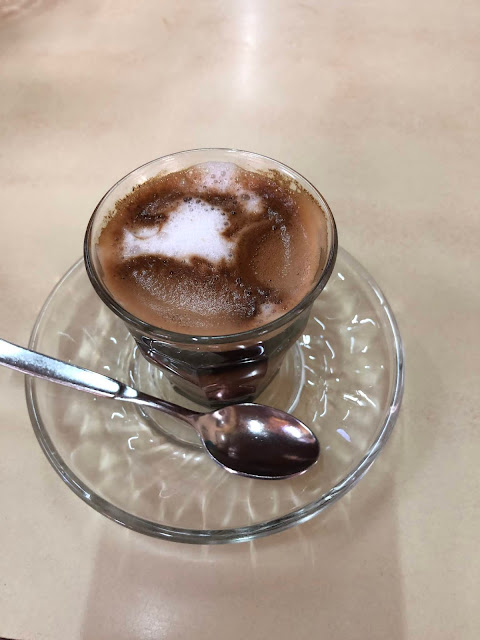 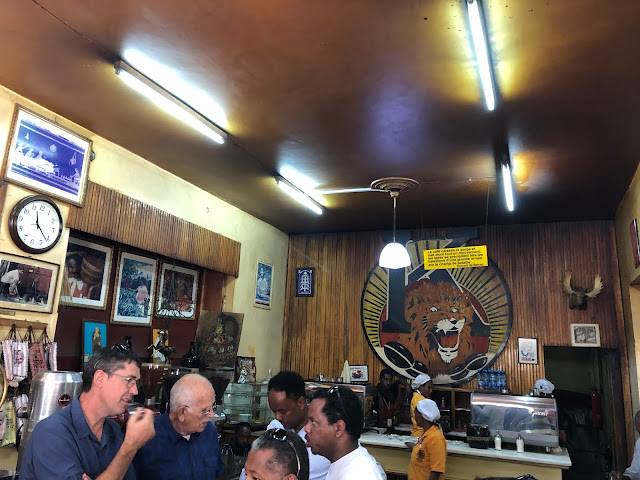 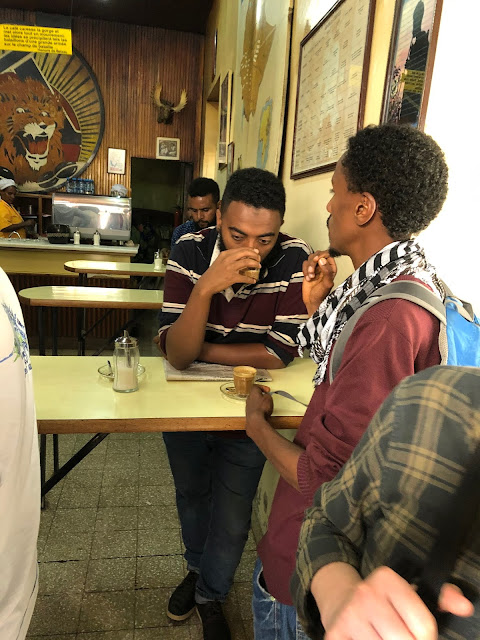 Kaldi's
Kaldi’s is also a famous coffee chain in Ethiopia. Unlike Tomoca, which is meant to be drank quickly, people sit down at Kaldi’s for long break and have table service instead of ordering at the counter. I liked the outdoor seating at most Kaldi’s and their macchiato is pretty good. 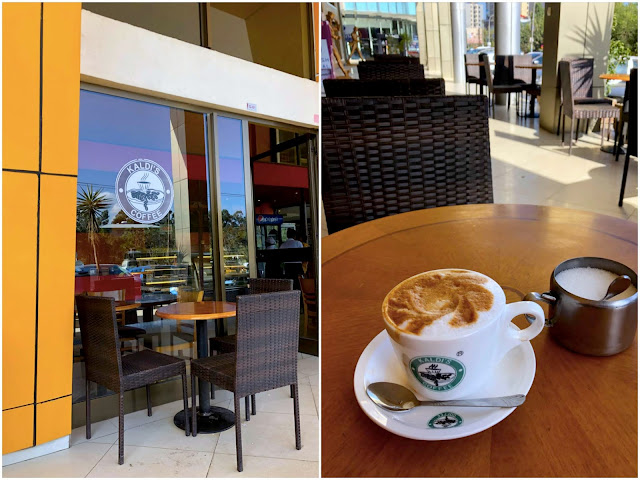 Abyssinian Cafe
By far my favorite macchiato in the city is at Abyssinian Cafe. This stylish cafe was practically empty when I went on a Sunday afternoon. It is hard to compete with its famous neighbor Tomoca, but I loved the vibe at Abyssinian Cafe and the coffee was exceptional. 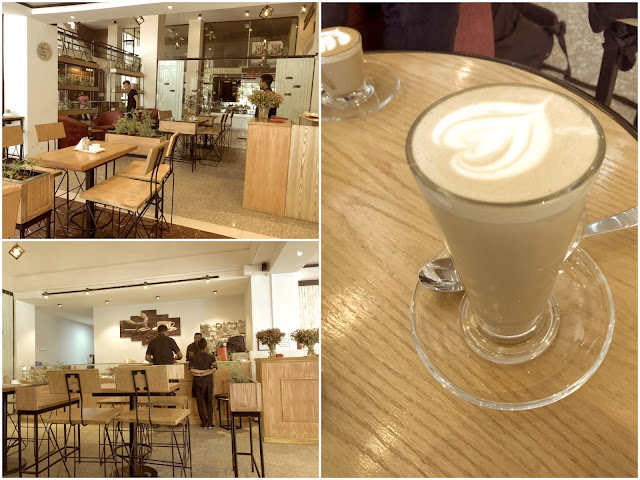 Golden Tulip Hotel
You don’t need to go to a cafe to get a macchiato. Every hotel and restaurant will be able to prepare one for you. I had a macchiato every day at the Golden Tulip and was pretty pleased with the quality. 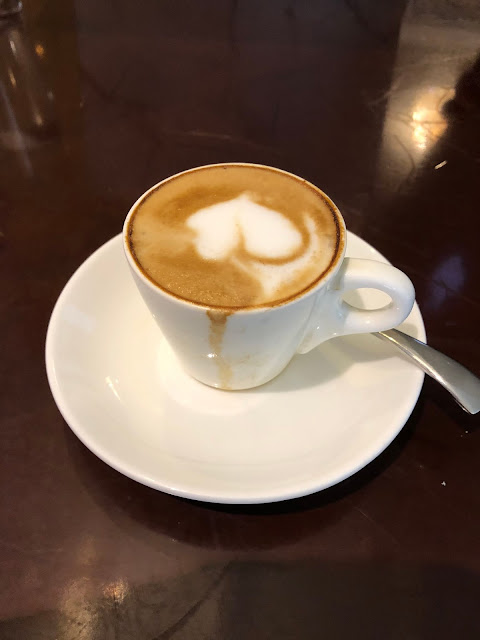 Finfinee Restaurant
Both Ethiopian and Western restaurants alike will serve macchiatos. This one from Ethiopian restaurant Finfinee is pretty typical. 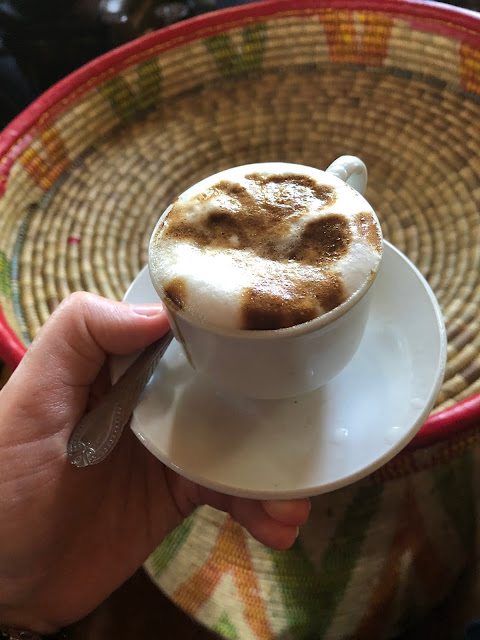 Traditional Coffee Ceremony
I also had the great honor of attending a traditional Ethiopian coffee ceremony. These are commonly prepared among friends or colleagues, and I was invited to one in the office of a local NGO in Addis Ababa. Popcorn is provided at most coffee ceremonies as a little something to eat before the coffee, since you never know if your guests have eaten or not before  they arrive for the ceremony. Its also good to offer some snack like popcorn because the ceremony can be very long. First you must wash the beans, then roast them, then grind them, then boil the grounds in water over charcoal. It might take one hour before you actually have your coffee.

The ceremony is a good experience but the coffee itself is very strong and bitter. No wonder they always offer it with sugar! 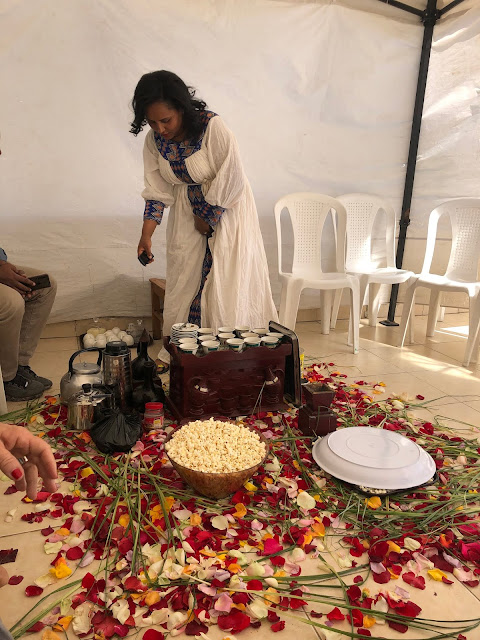 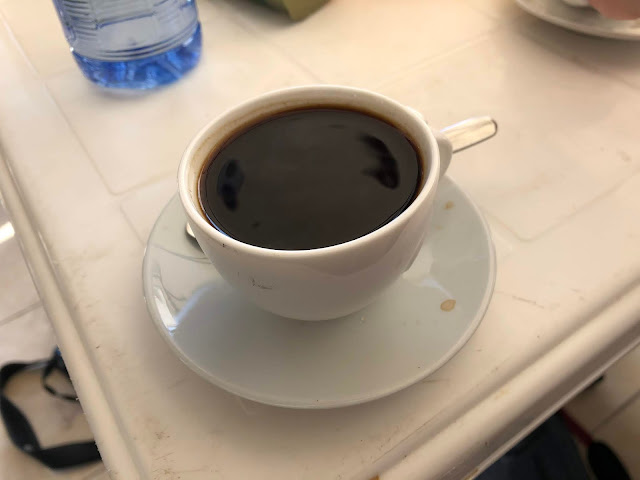 I didn't go out at all for the first 6 months of quarantine.  I had been prepared for two weeks. That's what I thought "quaran...