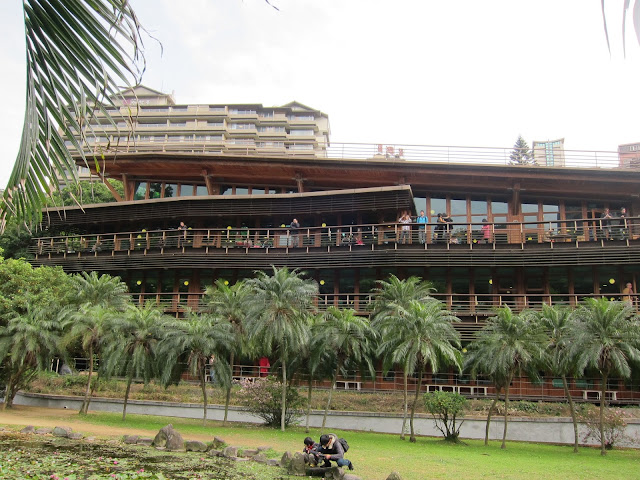 I was first tintroduced to the Xinbeitou Library aka "The Fantasy Treehouse" through the blog "Girl Meets Formosa" when I was searching for things to do in Taipei. Now, my partner happens to be from Taipei, but when I went in March of 2012, I was only accompanied by my Taiwanese-Japanese friend from middle school. My partner gave no advice as to how I should spend my time in the big city. This is either because I didn't ask for advice, or because when you grow up somewhere, you don't really know how tourists spend their time there. My friend, on the other hand, was well-versed in things to do as far as tourism goes....but I'm no ordinary tourist, and I have a particular fetish for libraries. Only after I returned from Taipei did I learn that my partner had full knowledge on the Xinbeitou library and had even been there several times! Then why did I search the Internet to find this place!? Oh well. 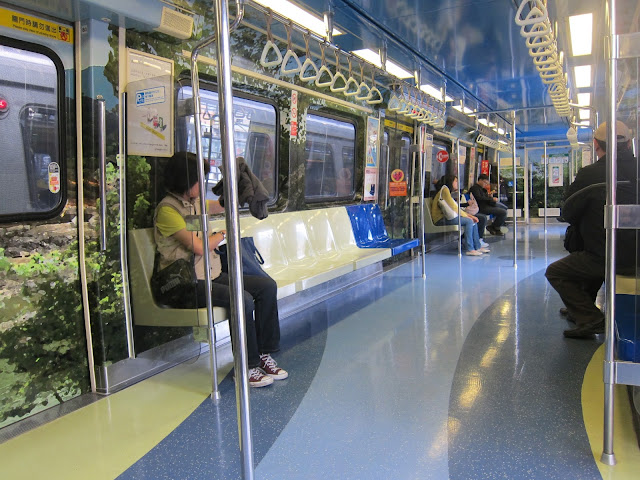 The journey begins on the Taipei MRT, where you board the Xinbeitou line from Beitou to Xinbeitou ("New Beitou"). Xinbeitou is famous for its hot springs, and even though it is only a half hour from the city center, it feels like you've entered the wilderness (or I'm just being dramatic). The inside of the train tries (in a cute but cheesy way) to imitate this natural beauty. 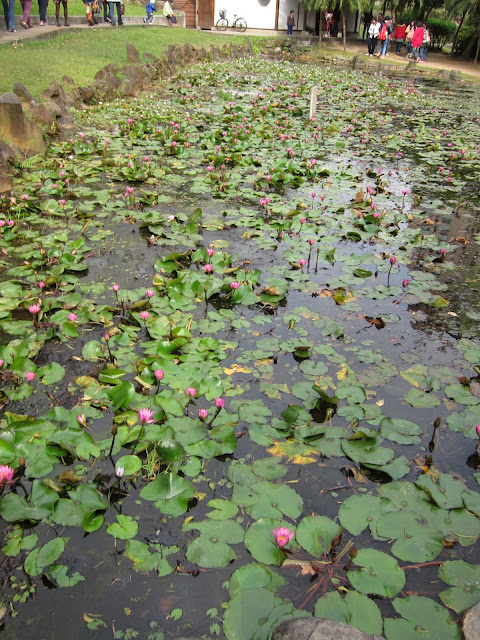 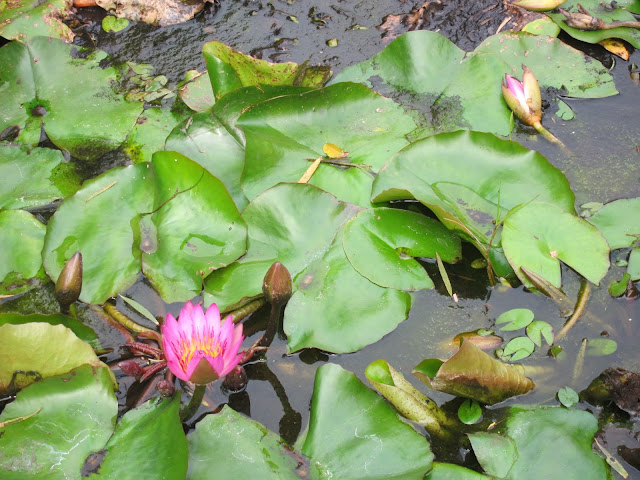 The gardens around the library were very well-landscaped. The library is located right in the middle of a crowded public park, which is awesome...on a less crowded day.


The library's roof juts out from the forest. It's wooden frame blends in nicely with the landscape, but its sharp angels also contrasts with it. 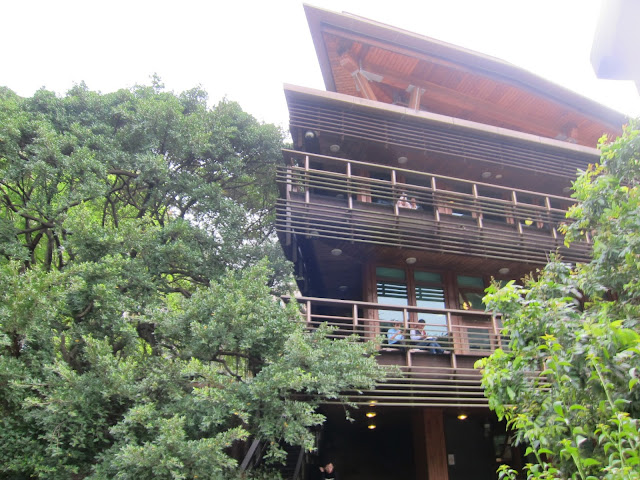 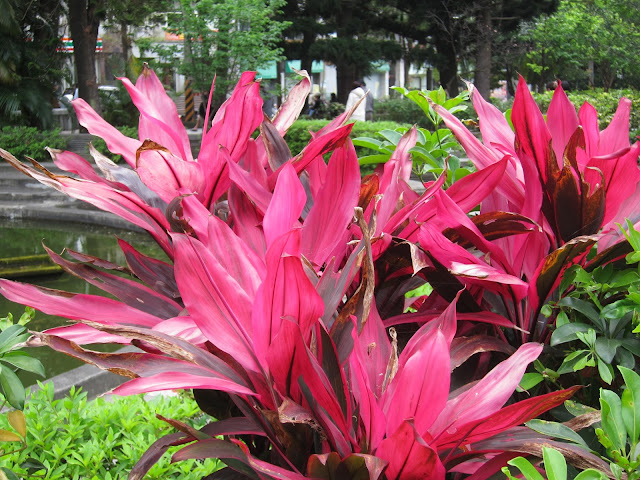 I took a lot of pictures outside the library, because the pairing of architecture and nature was so harmonic in this space. 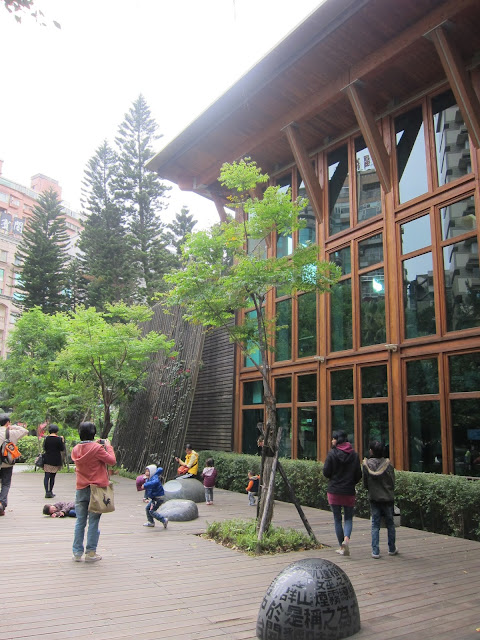 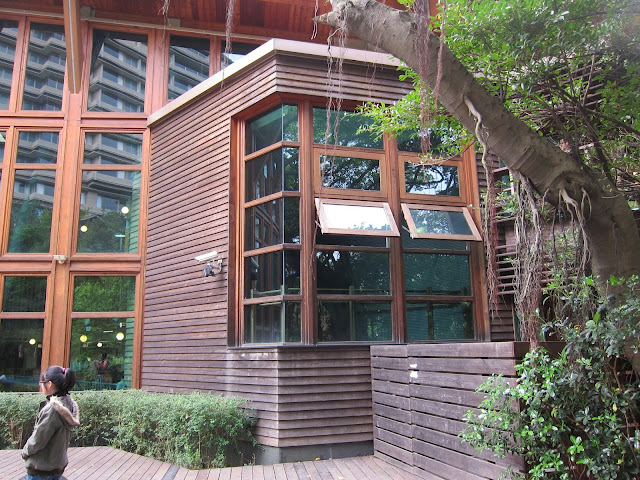 On the other side of the library there were far less tourists, so I could photograph in peace. Some shots don't even contain a single person in them. 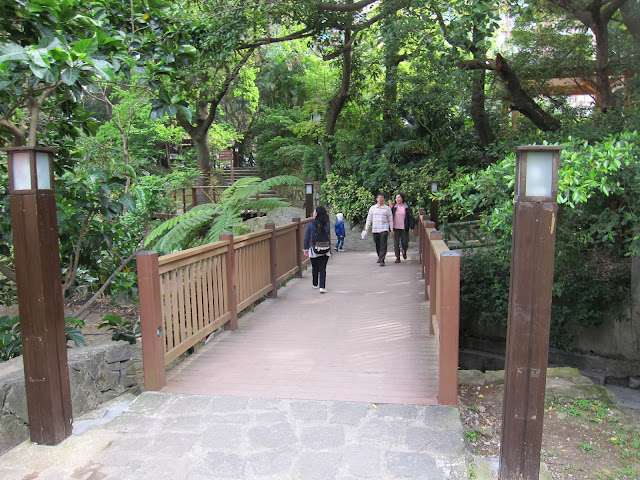 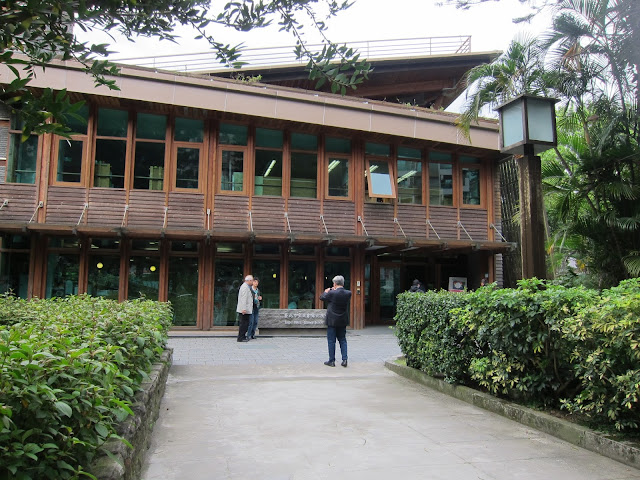 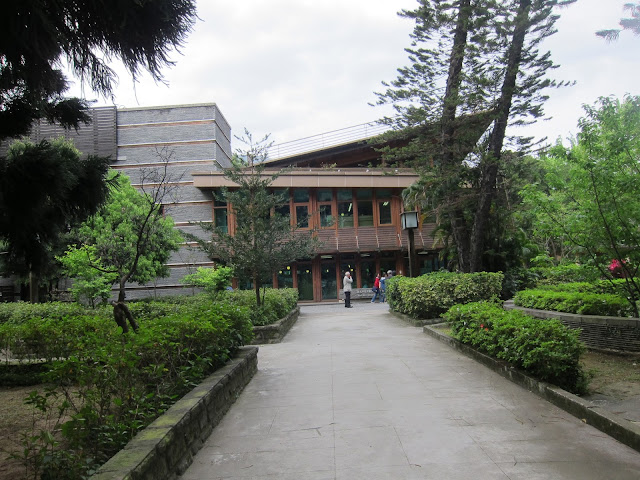 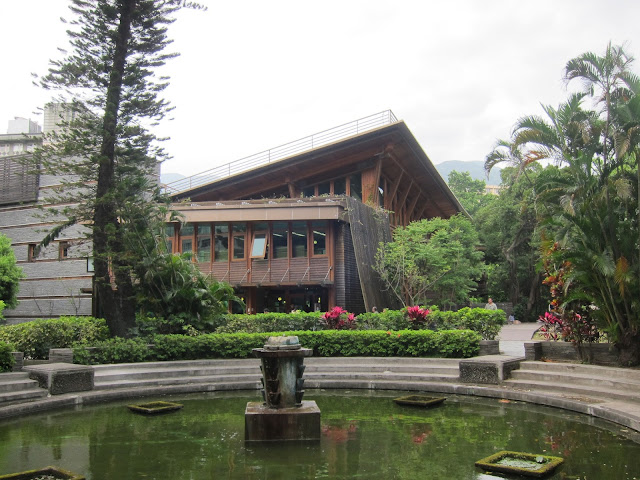 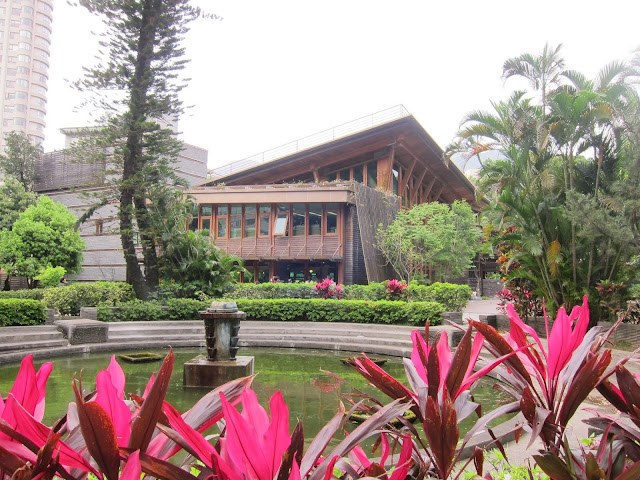 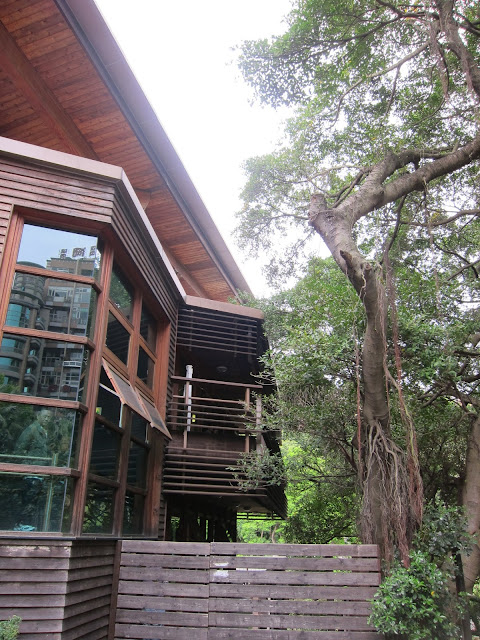 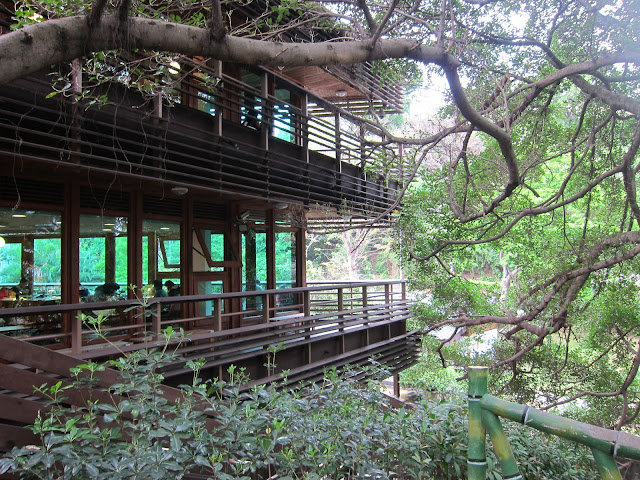 A profile shot of the library shows the crooked edges of the balcony mimic the ripples in water in the of a creek nearby. 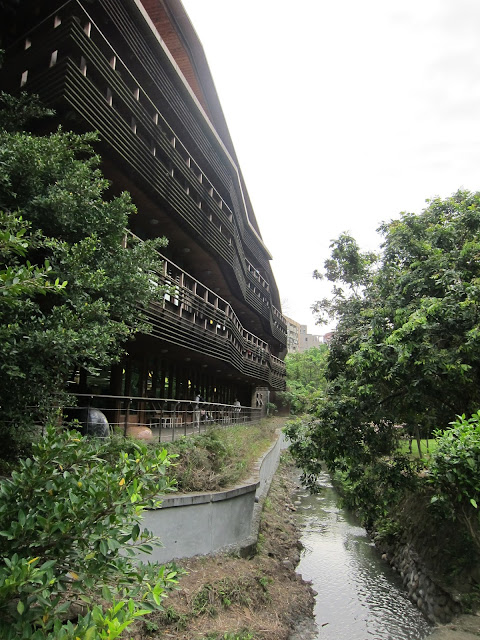 Alright, so when I googled the Xinbeitou library, I was surprised to find few photographs of the inside....

Now I know why.

Technically, it is against the library rules to photograph inside the building. The librarians are watching tourists like hawks, ready to reprimand them if they even so much as pull out a camera.  I tried to sneak a photo when I thought no one was looking, but I was caught!

Of course I was so embarrassed that as soon as the librarian walked away, I tried to sneak another photo, this time it was big trouble. I was taken to the front desk, where I explained in the worst Chinese anyone has ever heard that I was a blogger and  I just wanted to take pictures for my blog. They must have understood my message, because I was then required to fill out a form, and presented with a photography pass! 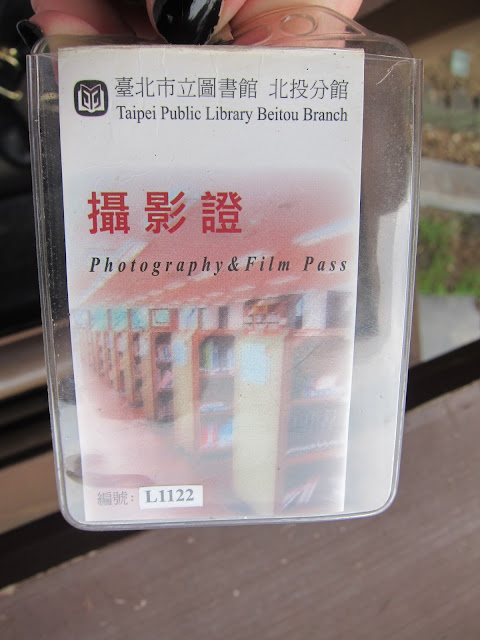 But now I have to wear this corny pass when I walk around the library, which makes me look so dopey, and I still cannot photograph any people (and people were everywhere) even myself. 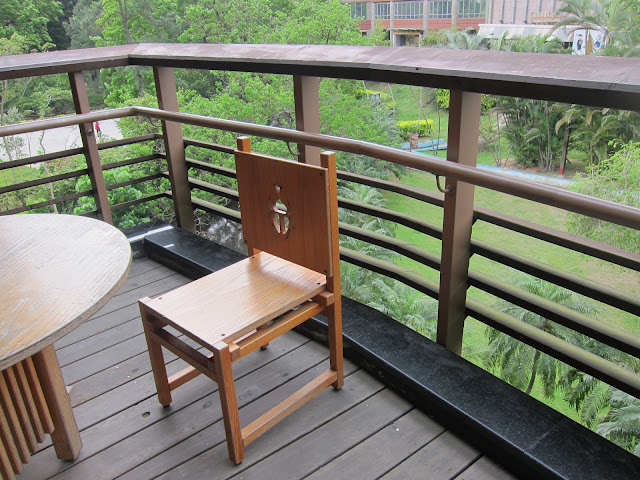 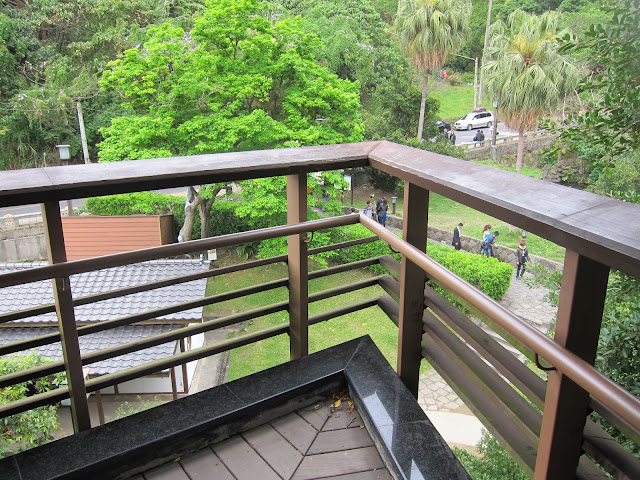 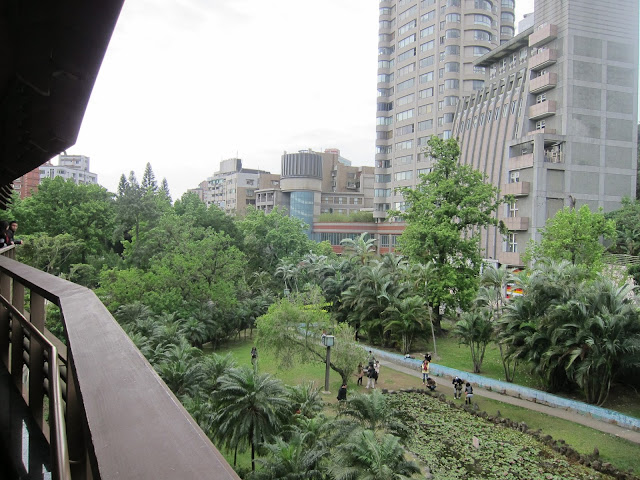 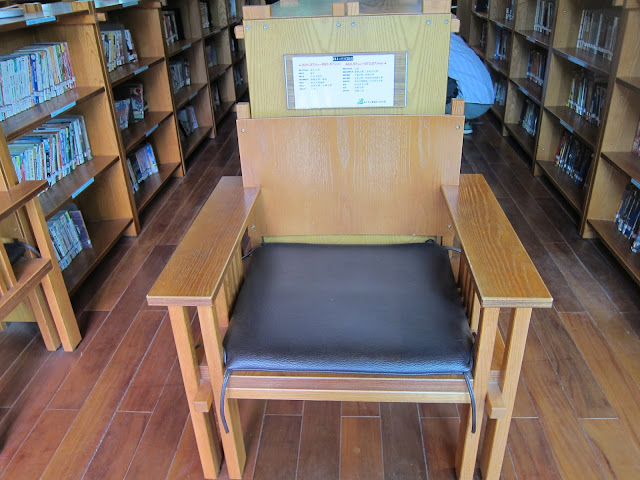 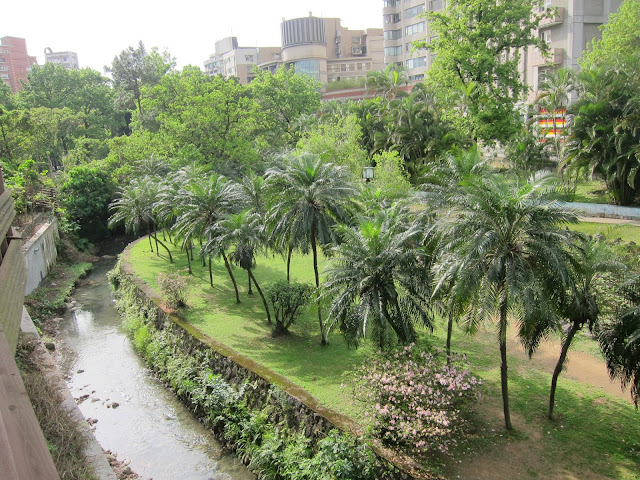 View from the top balcony 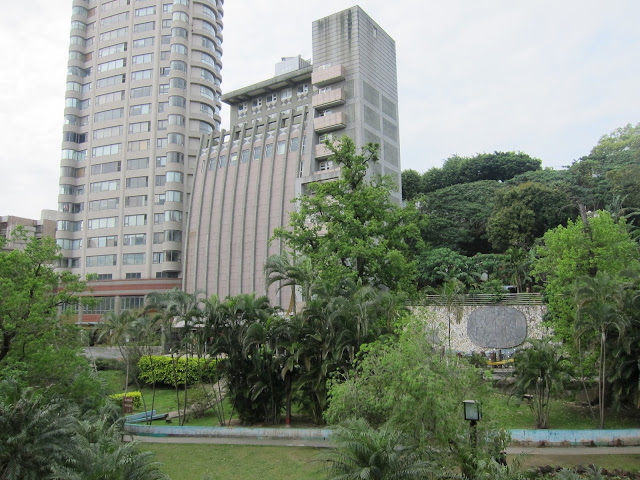 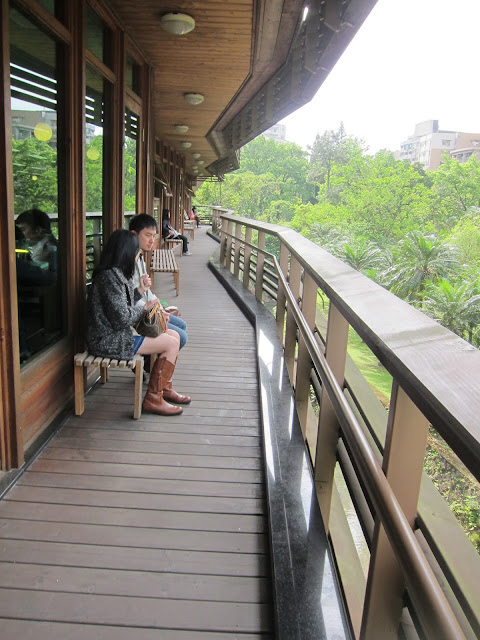 Woops! I guess I missed that rule about not photographing people 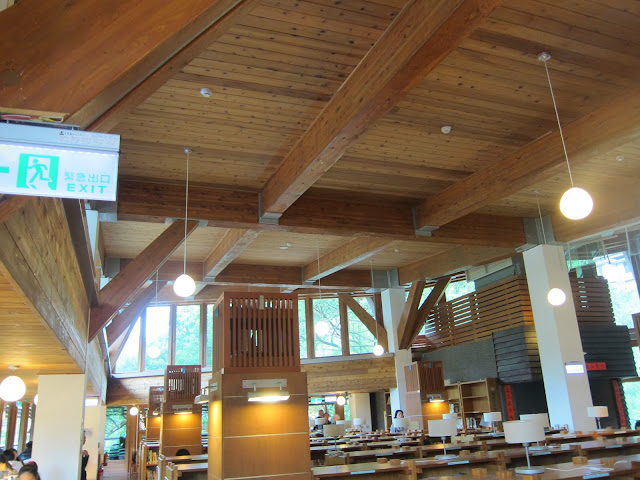 A rare look inside the library! 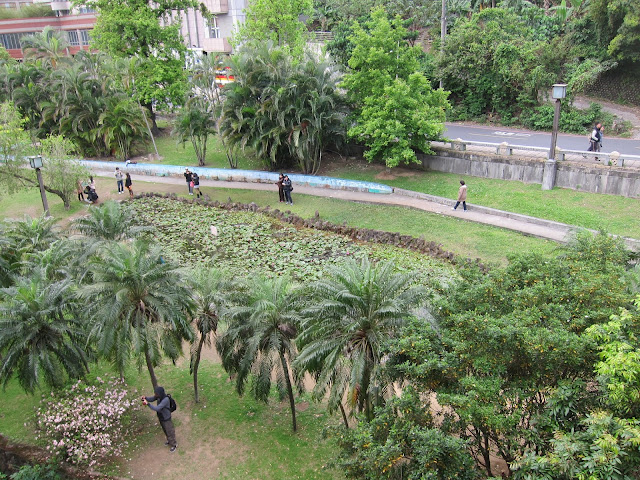 A walk around the gardens in really worth doing if you have made the a trip to Taipei. My friend thought I was crazy for going all the way up to Xinbeitou just to photograph a library. This however, was one of my favorite parts of the trip. It was the only time I actually rode the trains by myself, and the view from the windows of the train reveals a very different part of Taipei than what you will see from  the 101. I really recommend this trip, if not for the library, then for the hot springs. And if not for the hot springs then just for the chance to experience a metropolis in the heart of a tropical paradise.
at March 25, 2013