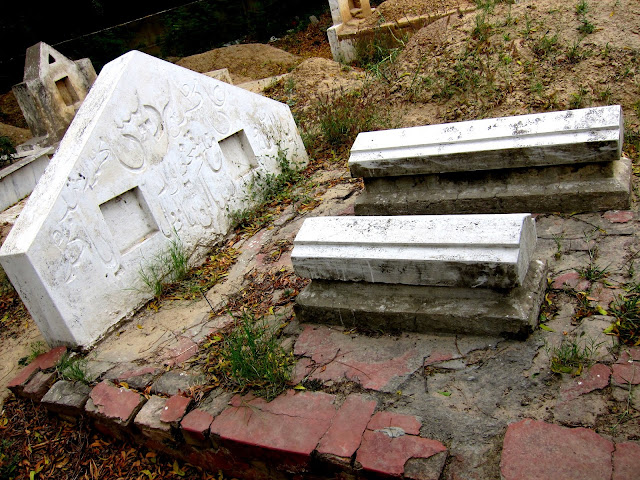 I had noticed the cemetery on our way home from the juice stand the previous night. Or rather, I had started talking about cemeteries, and my host had pointed it out to me in the car. At night it looked like little more than a field of darkness.

The cemetery was only two houses down from the home where I was staying in Lahore, but the task of getting there took some negotiation. We were in the neighborhood of Defense, which was heavily guarded with a police box on many street corners. It was not illegal to enter a cemetery, nor was is especially dangerous, but the sight of an obvious foreigner walking down the neighborhood street and into an unpopular cemetery would have no doubt caught the attention of neighbors and the police, which could lead to questioning, and apparently this was not something my hosts wanted to be bothered with.

They said I could go to the cemetery if the driver took me, and if I went with a Pakistani girl, and if we covered out heads so as not to arouse suspicion. My hosts were made more uncomfortable with the fact that I wanted to take pictures in the cemetery, which they said was not particularly disrespectful but rather, simply strange and unsightly. I had not realized until then, how closely my behavior was being watched and judged in Pakistan.

At noon, shortly after I awoke and dressed, a Pakistani friend and I were driven the embarrassing distance of fifty meters or so to the entrance of the cemetery, and while the driver stood watch at the gate, my friend and I entered through a door-less opening in the white wall. I would not have felt especially nervous, but for the fact that I could be easily spotted from the street. The cemetery wall little higher than one meter, and the car was parked uncomfortably close to the police box. I don't know whether I was feeling inherently nervous, or I was made to feel nervous, whichever it was, setting foot on that hollow ground gave me the thrill of trespassing onto private property, as though I was doing something illegal and risky.

My friend stayed close at my side while I snapped quick shots of what I could. I tried to photograph everything in sight without walking too fast, without looking like I was obviously taking pictures. After what seemed like only a minute she said that someone had spotted us, and that we should leave at once. We darted into the car and were whisked off through the city streets of Lahore. My heart was beating rapidly and I felt as though I had just circumvented danger, though I can’t be sure if I was really in danger, or my friend was just horribly embarrassed by me. 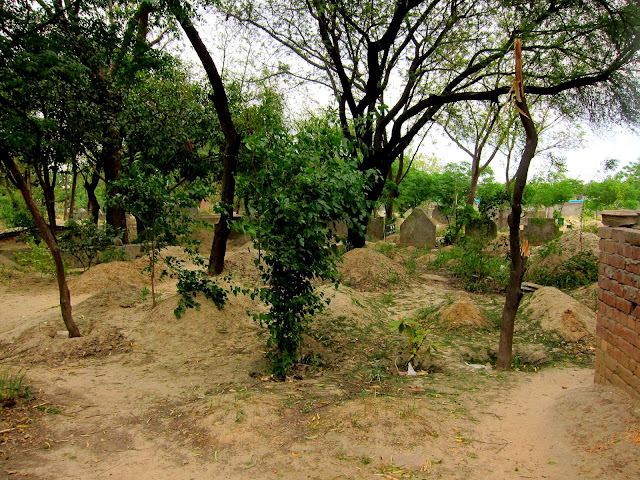 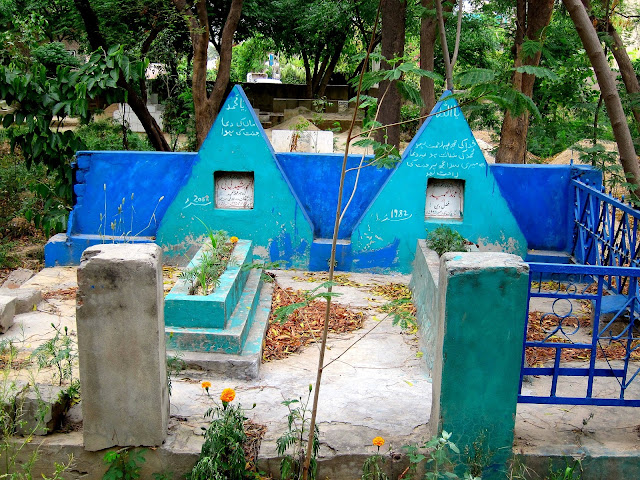 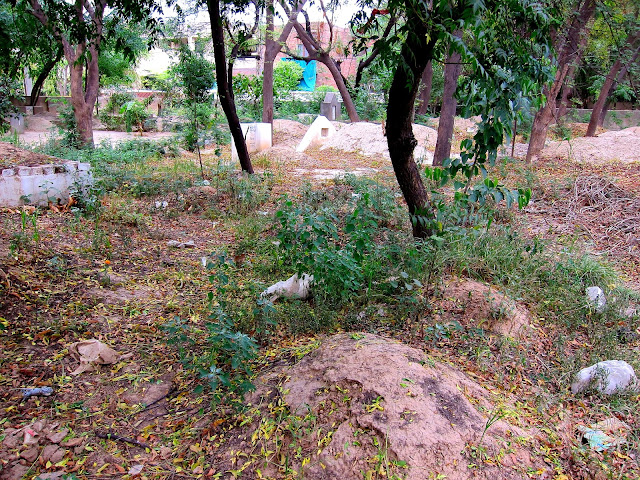 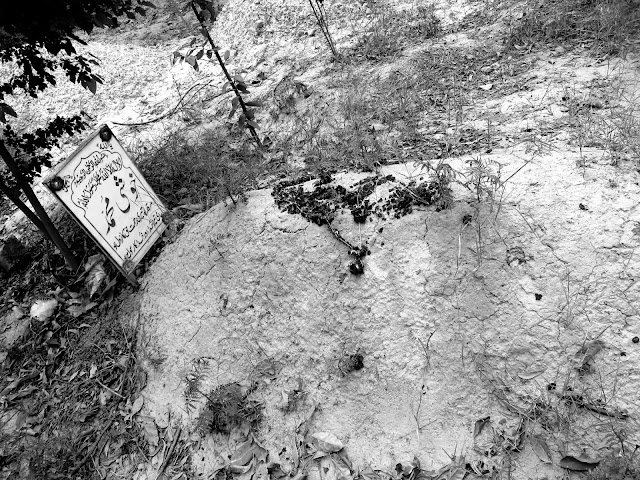 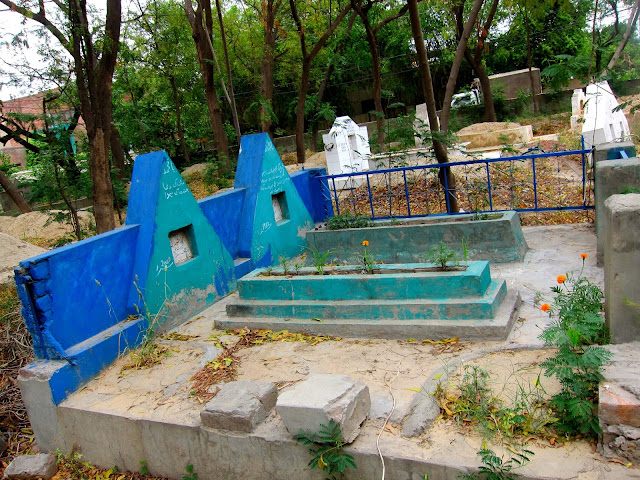 The cemetery was what my friends call, "unplanned".
Here the leaves fall to the ground and are not brushed aside, but instead form piles of rotting debris on the dry earth.
Here the dirt is piled high about the ground. The bodies are still buried below the surface, but the dirt has been raised so that no one walks over their grave.
Here some tombstones mark the piles of dirt, while others simply exist without tombstones.
Here there is no grass, only sand and dirt.
Here the trees don’t grow towards the sun, they twitch and bend into strange shapes, as though they had frozen while falling over. 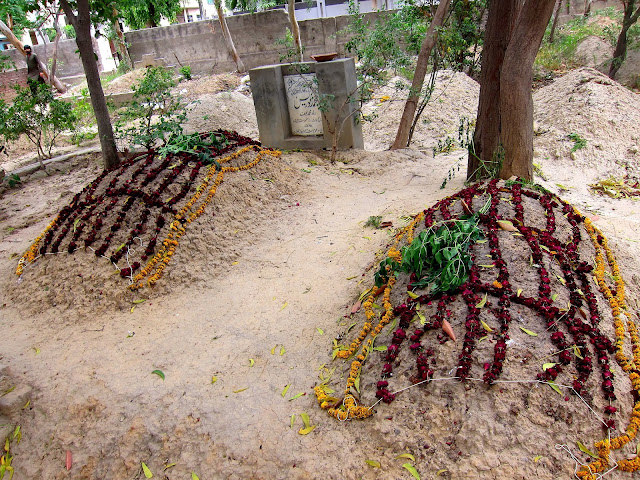 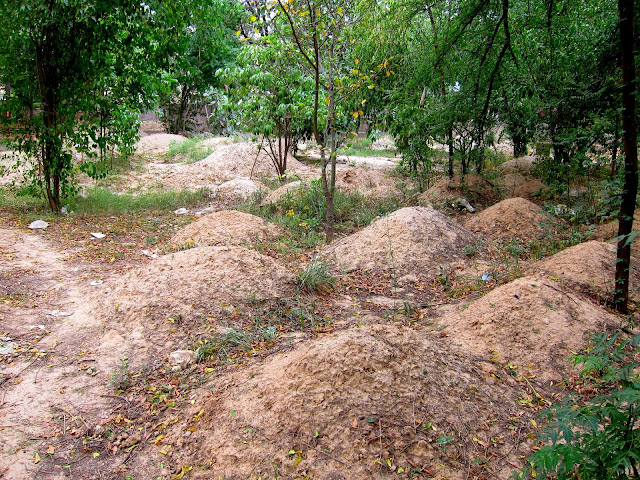 The cemetery shows little sign of having been entered until my friend and I breached the barrier that day. I could have walked around the sandy floor of the cemetery for an hour, easily, but for it being on a corner of a crowded and heavily policed street, I only got a brief moment to record it and share my experience with the world outside Lahore. 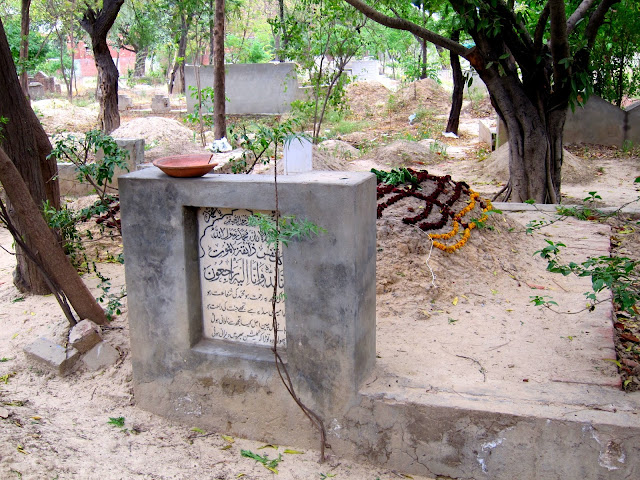 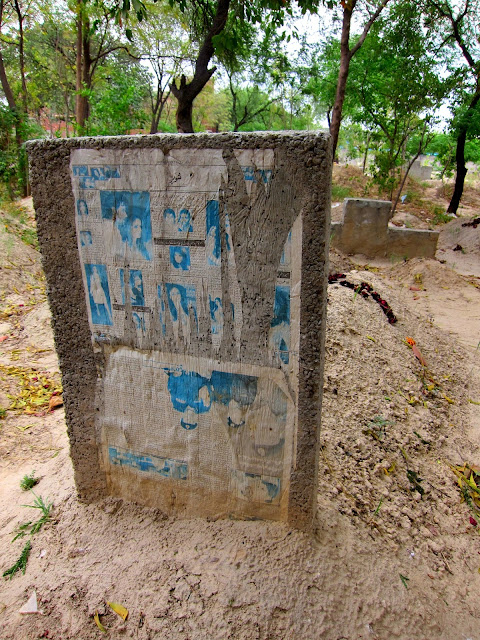