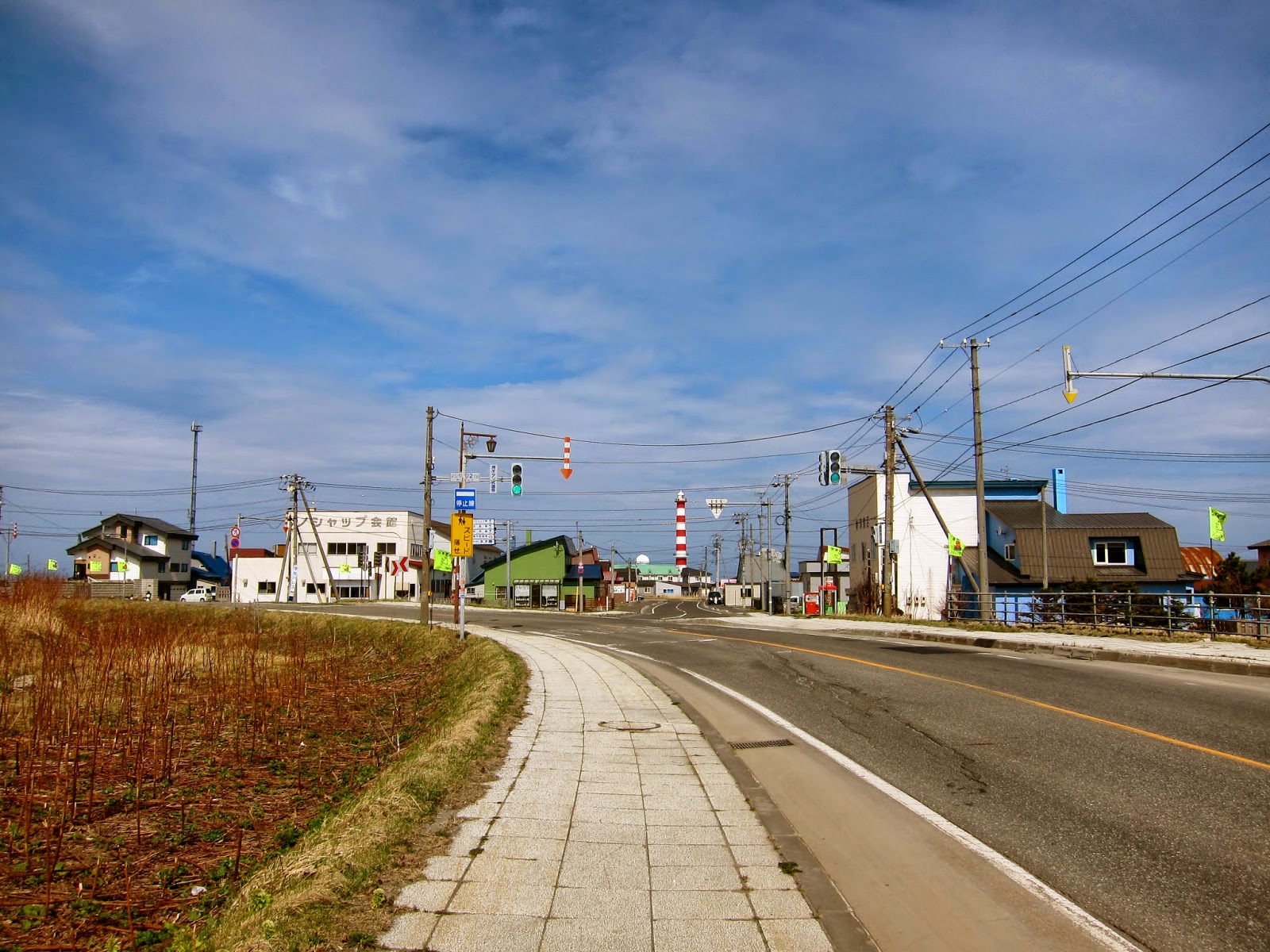 I woke up at 9:00, still feeling sick, but wanting to make the most of my only full day in Wakkanai.
I had spent the previous night in the hotel, and in between bouts of sickness I read the Japanese travel blog HitoriTabi and created a full itinerary for how I would spend my day. Unlike my travel in other cities, where I normally like to sight-skip rather than sightsee, I wanted to view all the attractions Wakkanai had to offer. First, there are not many attractions to begin with, and of those they all seem quite weird.  From the blogs I read and pictures I viewed online every quirky sight in Wakkani seemed to embody the city’s odd intersection of culture. Wakkanai has been many things in the last century. Once a bustling port, a remote U.S. airforce base, a productive diary farm, a sea passage to Siberia, and now a decaying relic of all those things.
I was so excited.
I headed to the train station early to catch a bus that I thought would leave at 9:44, but instead when an earlier one pulled up at 9:29, and seeing that it was heading to Noshappu Cape, I boarded it. I was one of only three people on the bus that morning. The other two riders were elderly and seemed to be locals. 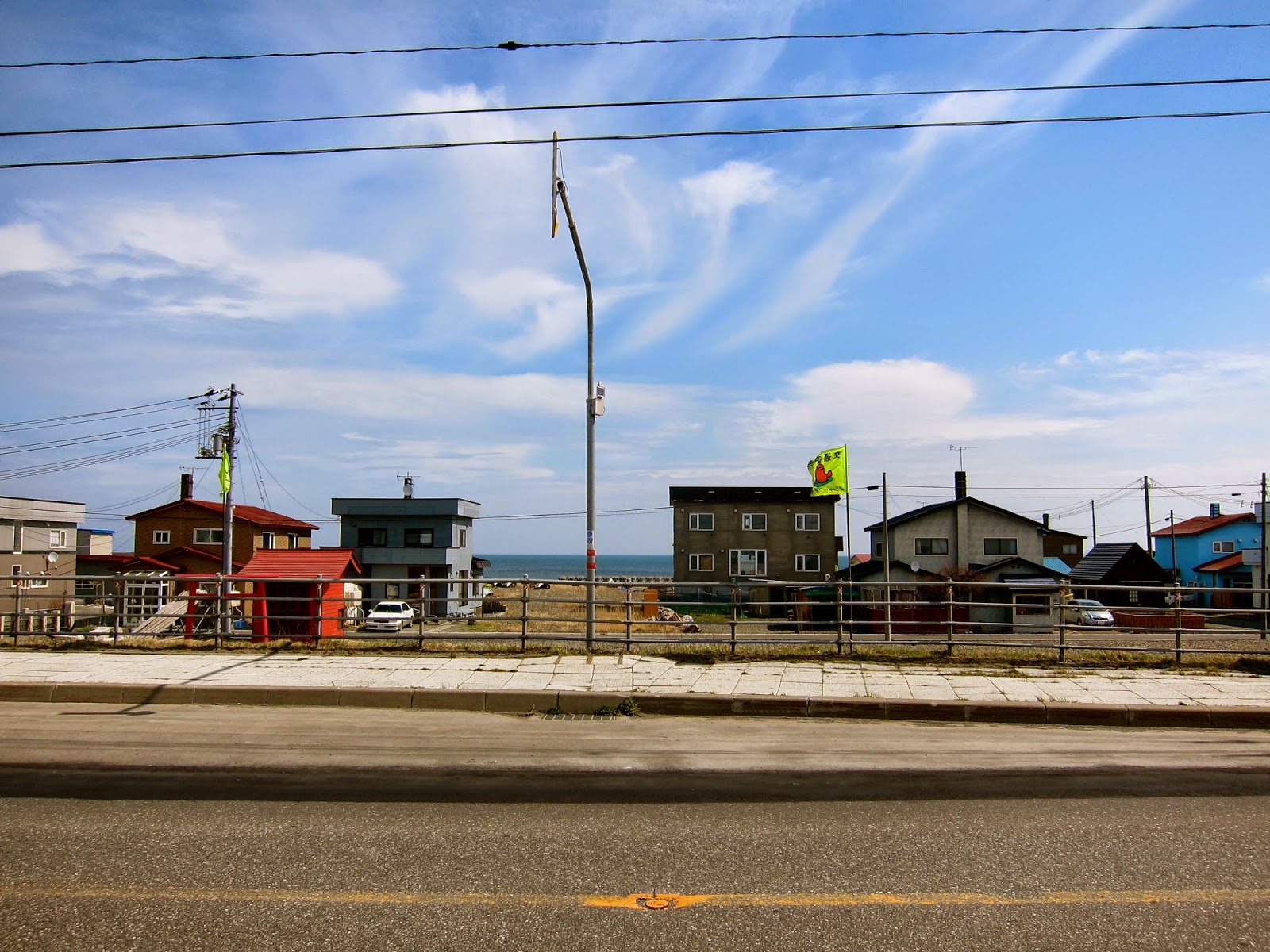 Along the way I saw many examples of how Wakkanai residents live their lives. Their houses glimmered in the Technicolor brightness that is unique only to dwelling sin Hokkaido, many with patios enclosed in glass, presumably to keep the house warm. Their homes bore such little resemblance to those of the mainland. No one had ceramic tile roofs or sliding doors.

When we passed a bus stop, a lone passenger got on. The bus stop was little more than a ceiling and three walls. Inside, it looked as though it had been decorated by things the neighborhood discarded. Yellow curtains, an old office chair, and a pot of plastic flowers. Somehow, people had thought that their junk would look better adorning a lonesome bus stop.
The final stop - Noshappu Cape - is a large gravel patch with another small three-walled shack. The bus makes a full U-turn, drops off passengers, and then heads in the opposite direction. From where I stepped off, I could see one large road leading to the red and white-striped lighthouse. Presumably I would find the sea. The land was wide and open. The sidewalks could carry four people shoulder to shoulder, though there was no such need as I was the only one walking. The homes were each several house-distances away. Even the abandon shops and their empty parking lots had been built on a large scale. With each building I passed, it grew harder and harder to determine if it just hadn't opened yet, or was entirely closed down. Considering that it was still early in the morning, I decided I would walk back the way I came closer to lunchtime to see if anything had opened. 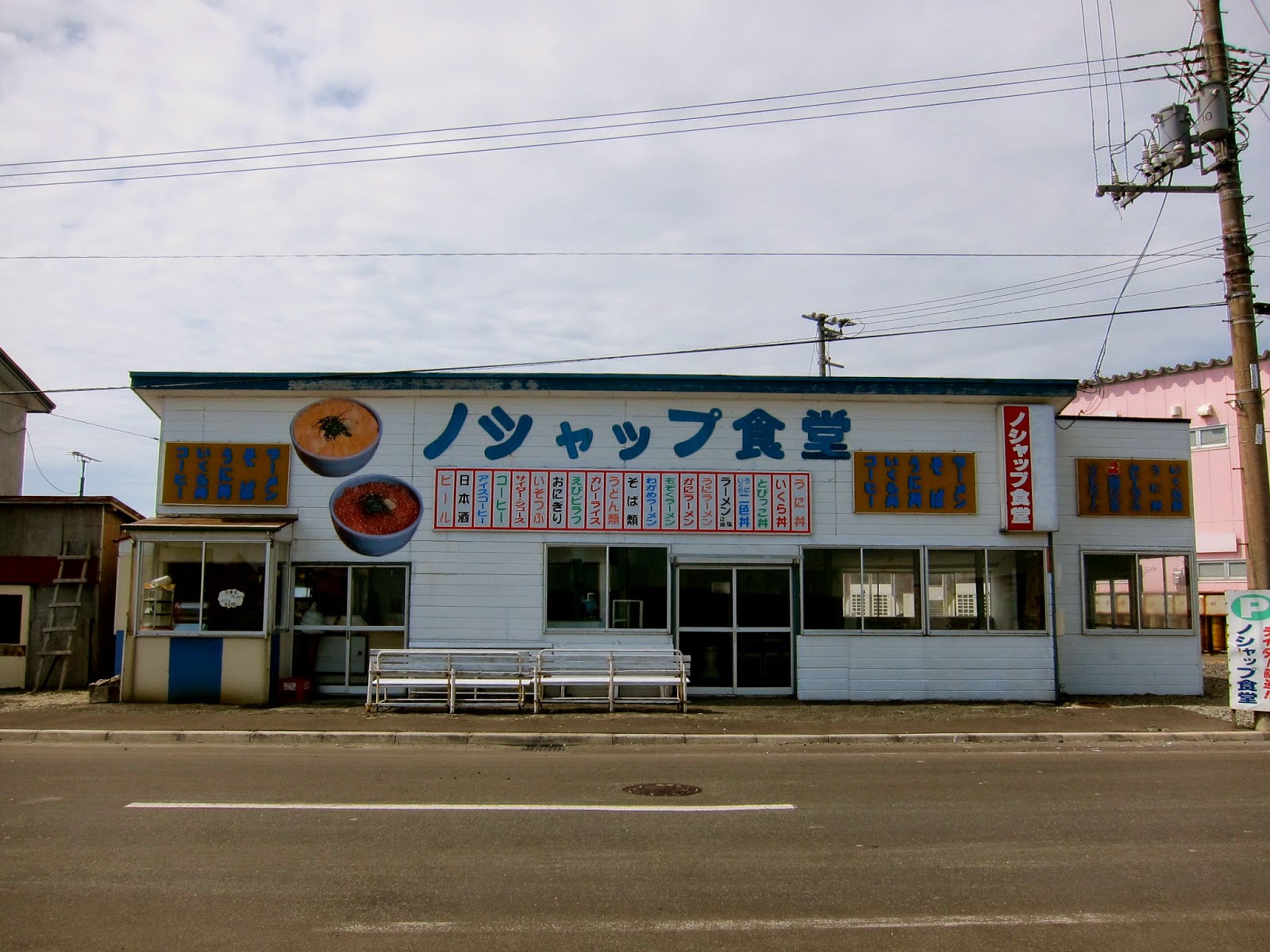 Noshappu, always seems to be on the brink of decay. One blogger who ventured to Wakkanai years before me wrote that the stores seemed to be going out of business, but when I traveled there, they still seem to be going out of business. It seemed to be stuck in a state of  frozen entropy.
As I walked along the road I spotted a herd of deer dining of yellow dried grass. I attempted to get close to them, but when I noticed that they were unchanged, I retreated, content with only a few photos from a distance. 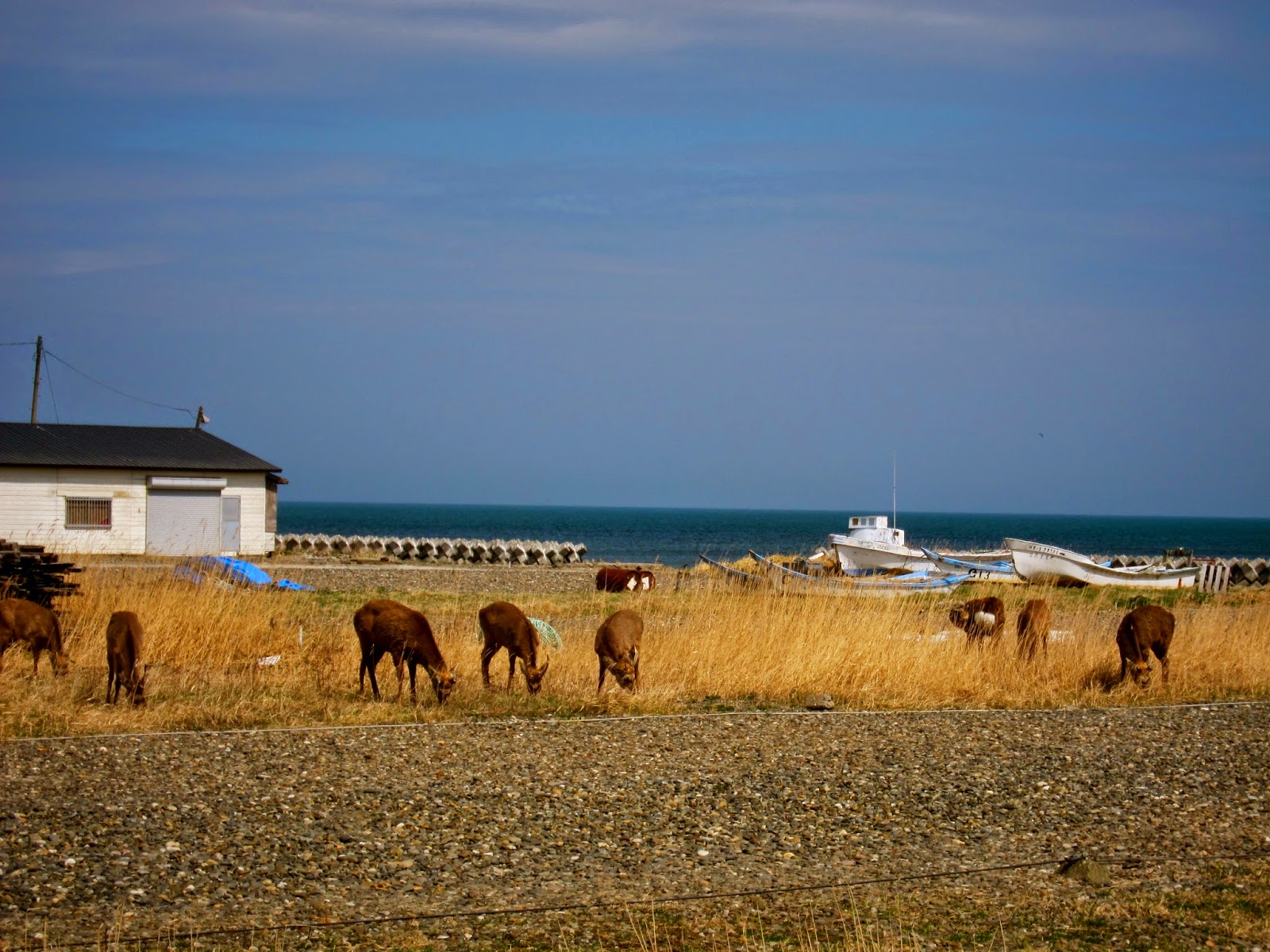 By the time I walked to the rusted dolphin statue, the very landmark that made Noshappu famous, the clock at the dolphins peak showed 10:00 am. There were only two lone men who followed behind me to photograph the statue. Both solo travels, neither said nothing to the other. 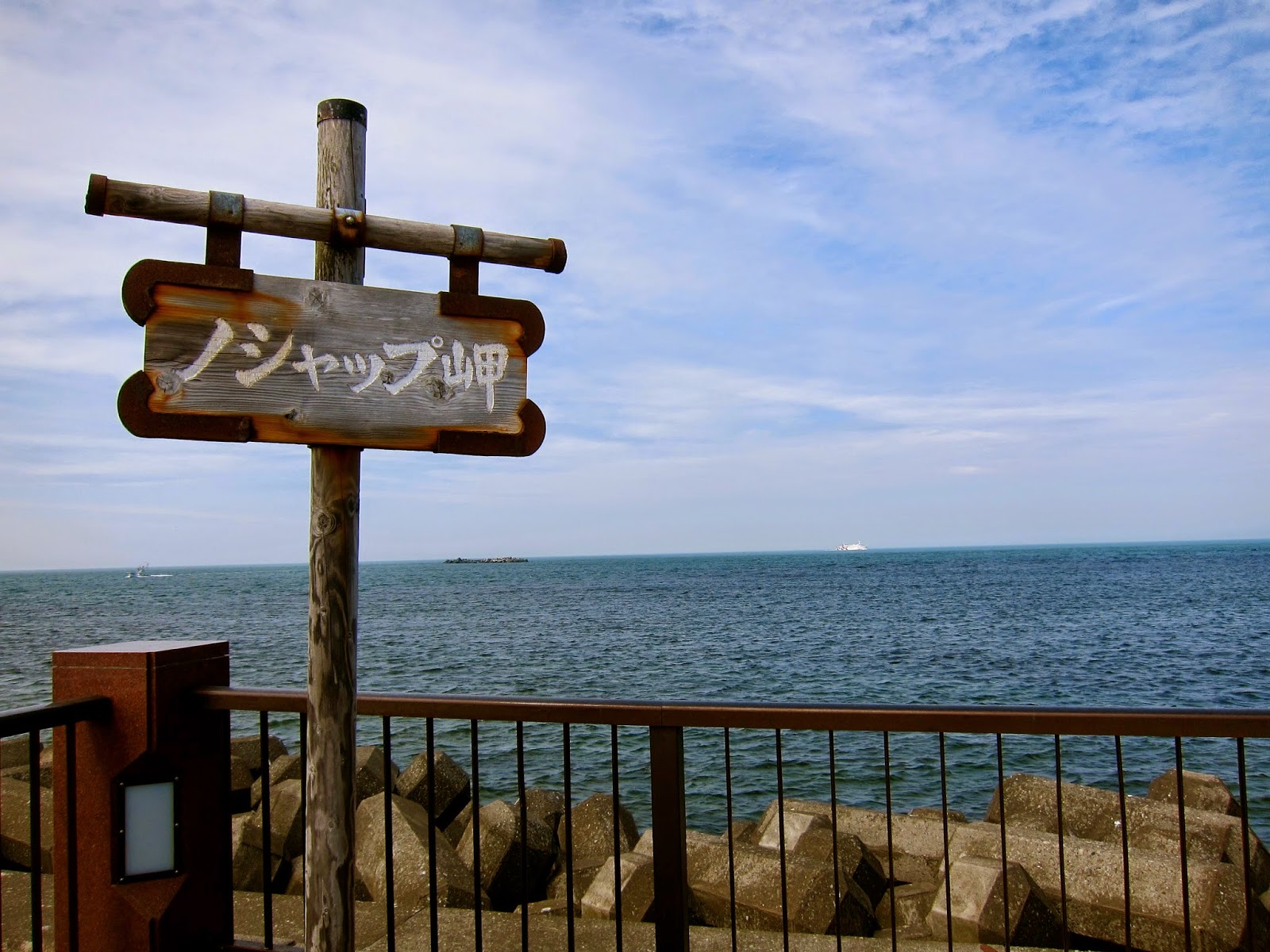 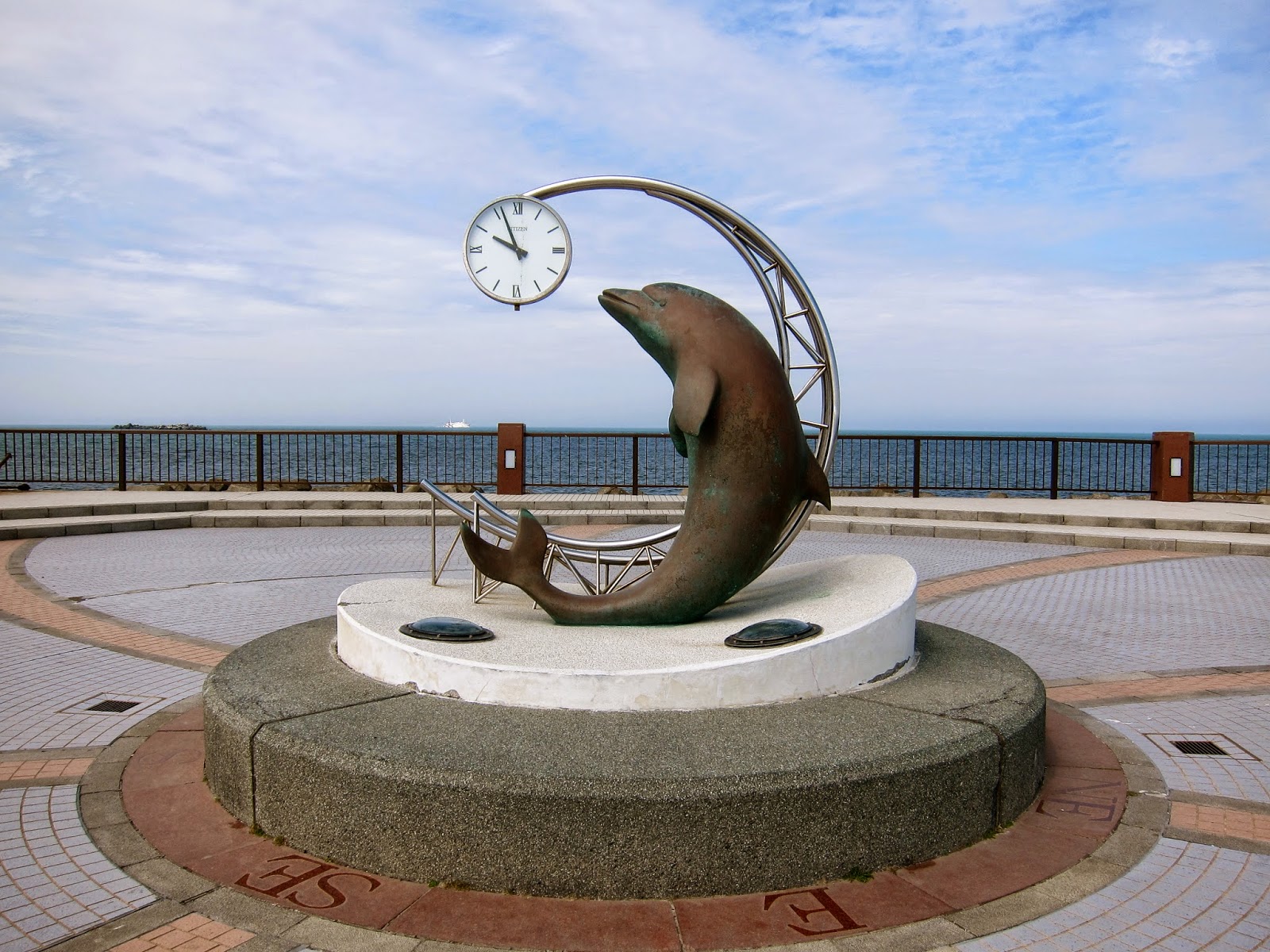 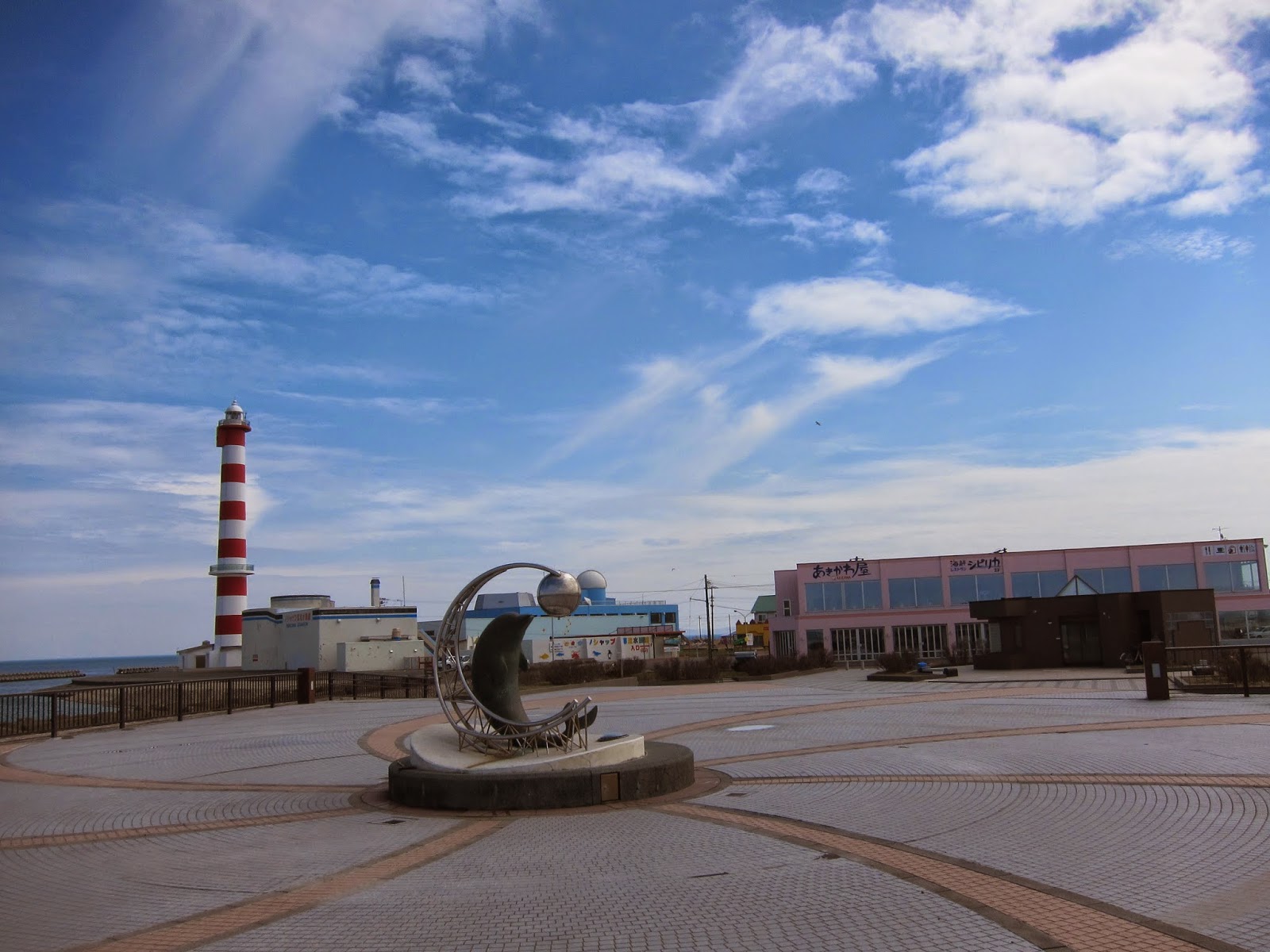 Across the street from the aquarium, and directly in front of the famous dolphin statue, was a pink gift shop, far too large and ostentatious for the small bare town in was in. I hesitated before opening the door, because I still couldn’t tell if they were open for business. To my relief, the door was unlocked and there were two women working behind the counter.
After making my souvenir purchases, I went to find Kaisendon. As I hoped, the tiny stores on the road to the coast were now open for business, though they looked as dark and unkempt as that morning. The only way I could determine they were open was that flags had been placed outside. They were ripping through the wind. 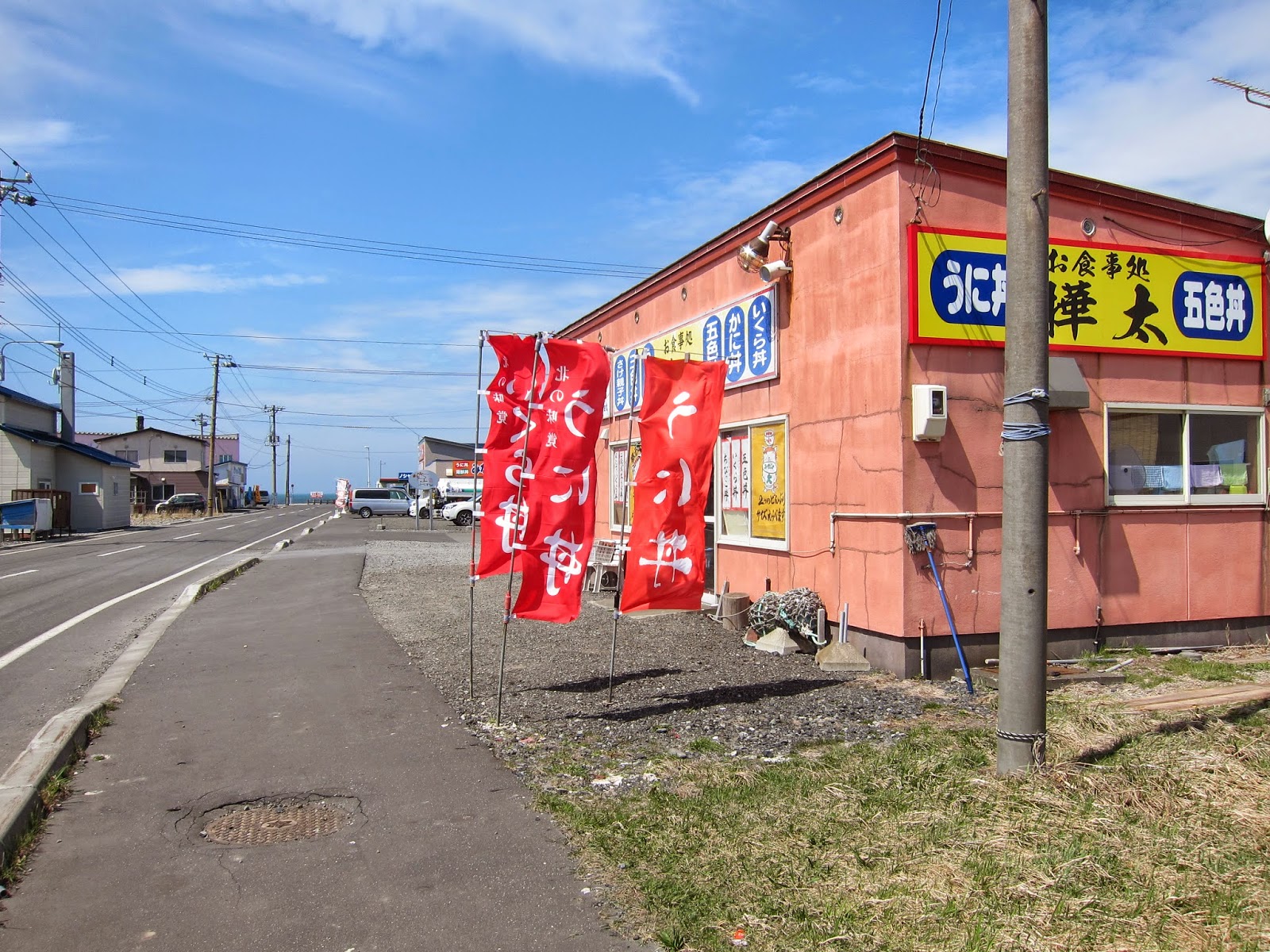 Without more than a casual glance inside the windows of several stores, I made up my mind to go to a large, bright orange building. It was the first one I had seen on the way from the bus, and somehow it looked like it did business more regularly than the other establishments.


I entered the restaurant, and was shown to a table by two elderly women who were obviously related.


At that moment a stamped of deer ran past the restaurant where I was eating. Minutes ago, they had seemed so content in the neighbors yard, that I almost mistook them for pets. But suddenly, wild creatures as they are, a heard of them ran along side the restaurant into the street, cleared across the intersection and into another small hamlet of houses.
The old women told me to go outside and photograph them, which I did. And when I returned to the table I ate my meal slowly, knowing that I had some time to pass before the next bus would arrive.

Every free inch of wall and ceiling in the restaurant was adorned with orange banner, each one displaying a handwritten message from a customer. I passed time reading the messaged from a distance. Most raved about the uni, which was exceptionally nice. I couldn’t find any banner in English, and I thought of making one, but enough time had passed and I decided to make my way to the bus stop instead. 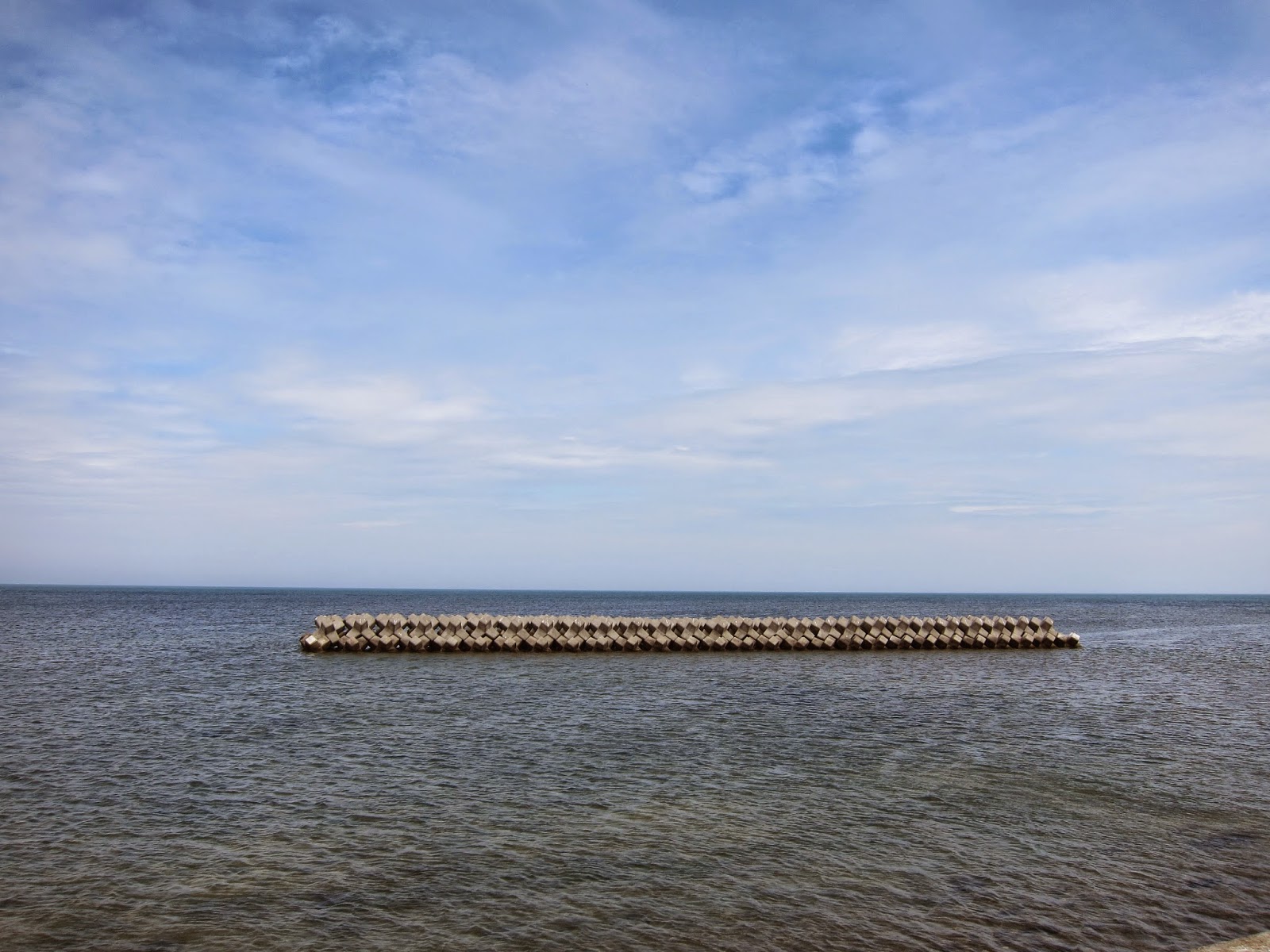 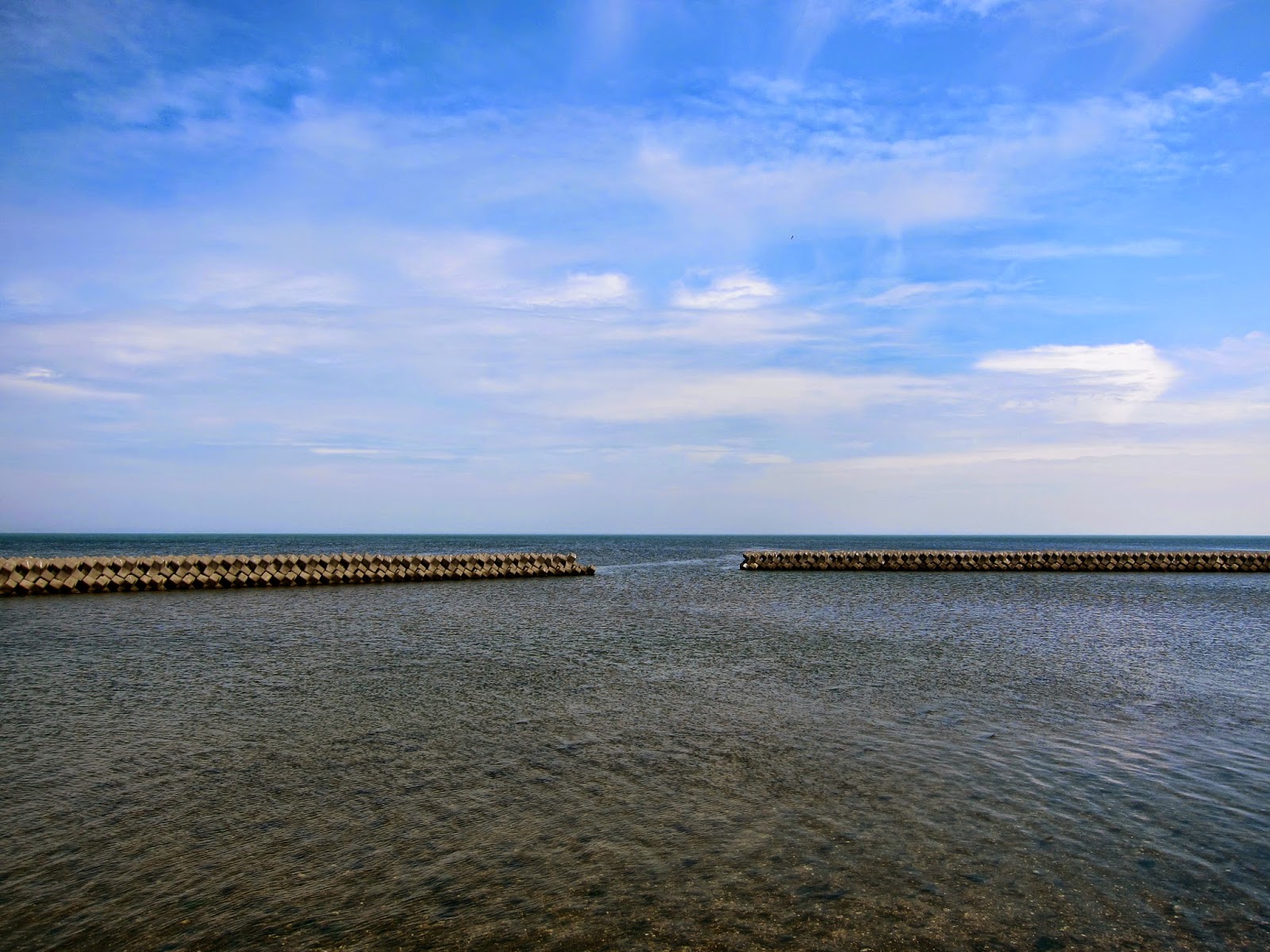 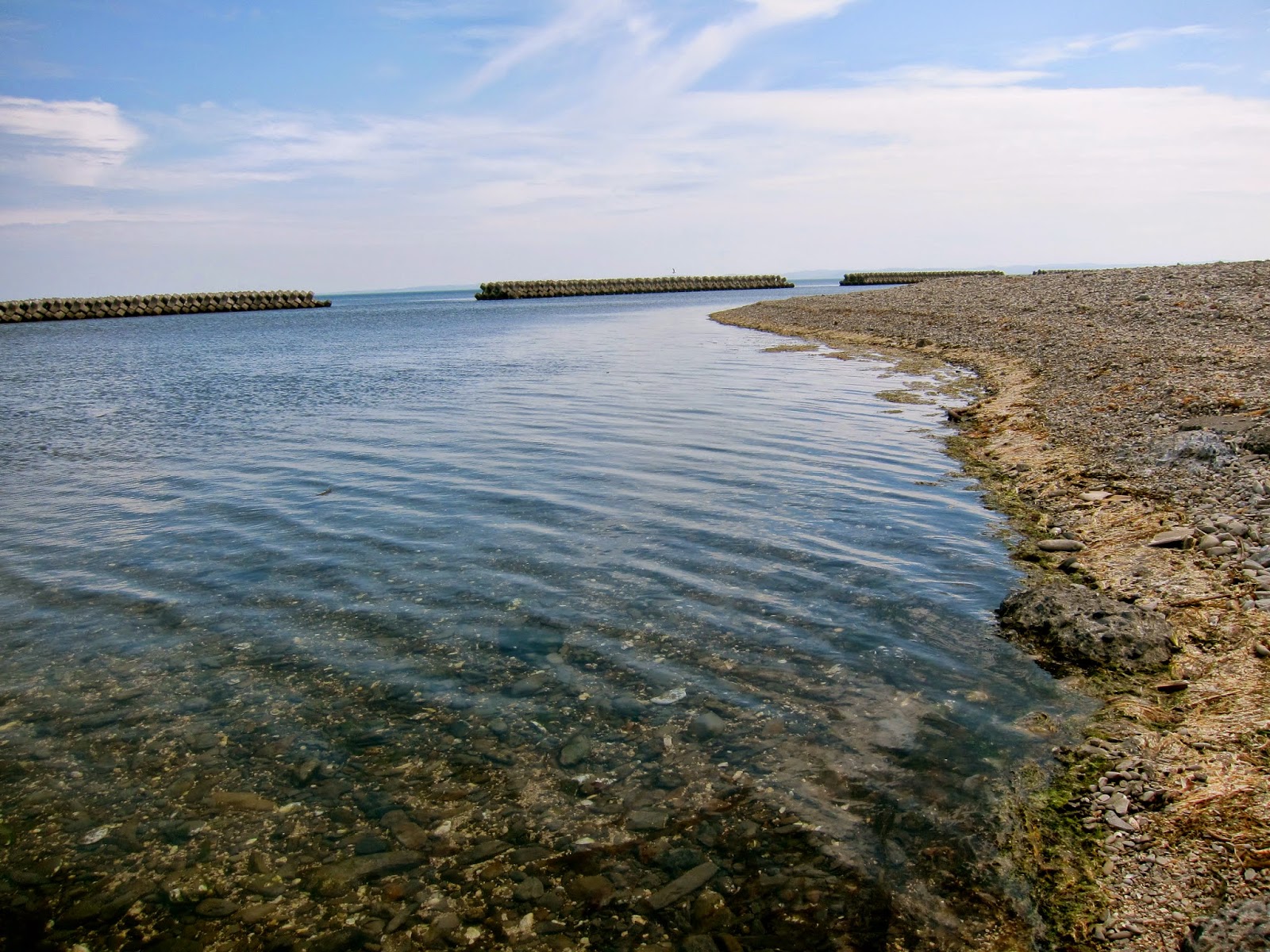