An Aquarium in a mall? Only in Dubai! 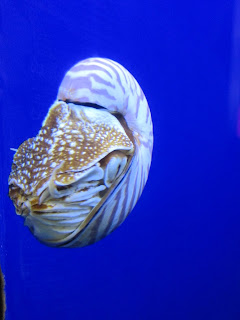 Now we embark on another tour of one of the world's great aquariums, but first, a few words about their journey to Dubai Mall itself.

The day after I arrived in Dubai, my host was busy at work until the early afternoon, so I decided to take a 30-minute taxi ride to the Dubai Mall in Jumeirah and check out the aquarium myself. Cabs are strictly cash only, and I had a 100 dirham bill (about $36) in my wallet, so I thought I would be just fine. 45-minutes of sluggishly moving through Dubai's traffic, we arrive at Dubai Mall, and I pull out my 100 dirham bill to pay the 45 dirham cab fair.
Too big, says the driver, no change.
What? How can a cab driver not have change for 100 dirham?
Smaller bills?
Nope.
Well...
So he tells there is a bank inside the mall, where I can break 100. Then he parks his car and follows me inside the mall. That's cool, I thought, at least he can tell me how to get to the bank. But apparently he did not know precisely either. So we walk for about 10 minutes to find an information desk, which points us to the other end of mall, a good 15 minute walk.
I couldn't help but think what an odd couple of mall-walkers we made, this old surly cab driver and myself.
But, after 20 minutes of walking side-by-side in awkward silence, we found the bank. I broke my bill, and paid him in exact change.
Lesson learned.

Always have exact change on you in Dubai.

Now, back to the aquarium, where I paid with credit card ;) 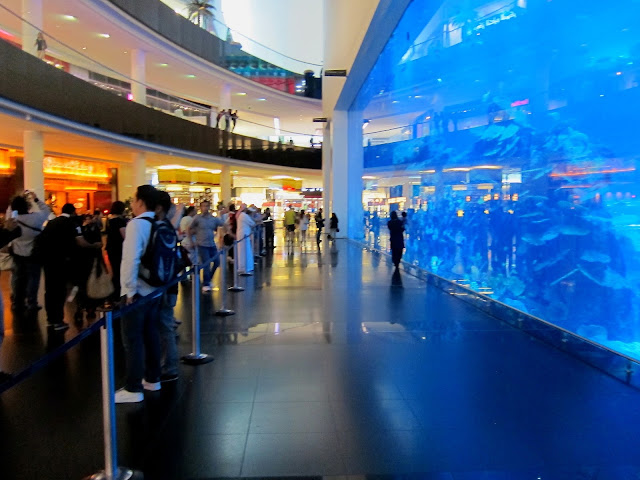 The Dubai World Aquarium is located in the Dubai Mall, which is one of many air-conditioned wonders in this man-made oasis. I was at first disappointed to learn that the aquarium was located in some tacky place like a mall. I imagined it to be like a large aquatic pet shop.
As you can see, I was a bit off in that assumption. 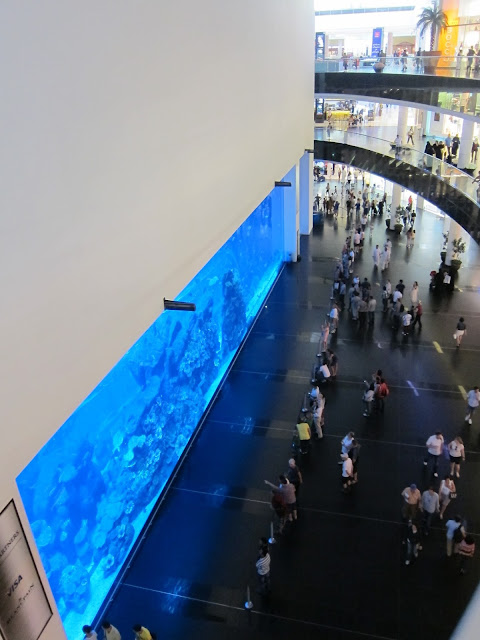 In my view, a mall is kind of a weird place for an aquarium, but so is the middle of a thick forest, next to someone's mansion, like the aquarium in Denmark.
And besides, for a country which also boasts an indoor ski complex in a mall, maybe a mall aquarium is not such an oddity. 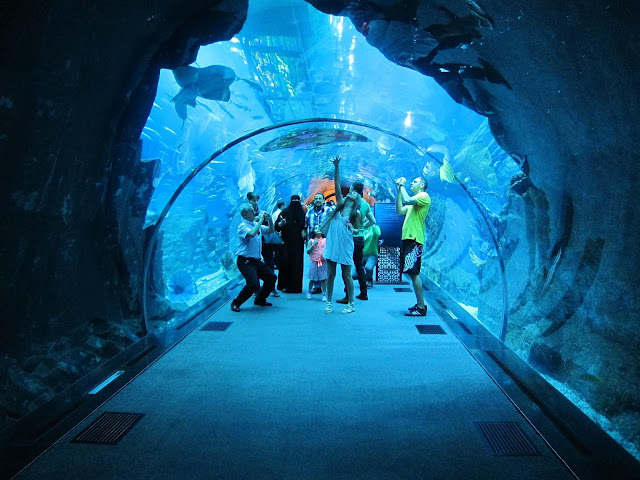 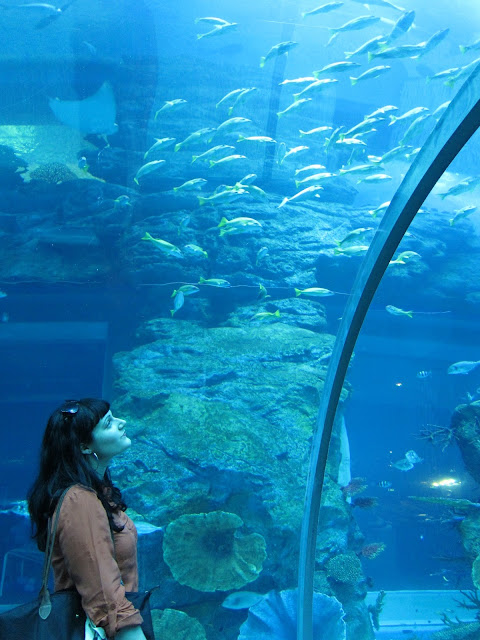 The aquarium begins as most do, with an impressive underwater tunnel. In Dubai, they sell tickets just for the tunnel alone, because it is in the Guinness Book of World Records for being  built with the "Largest single acrylic panel in the world" according to the plaque that hangs on the entrance.
I've always loved these tunnels, so I spent a good deal of time taking pictures here.

I purchased the VIP package for the aquarium, which included access to the tunnel, a boat ride, and the underwater zoo. 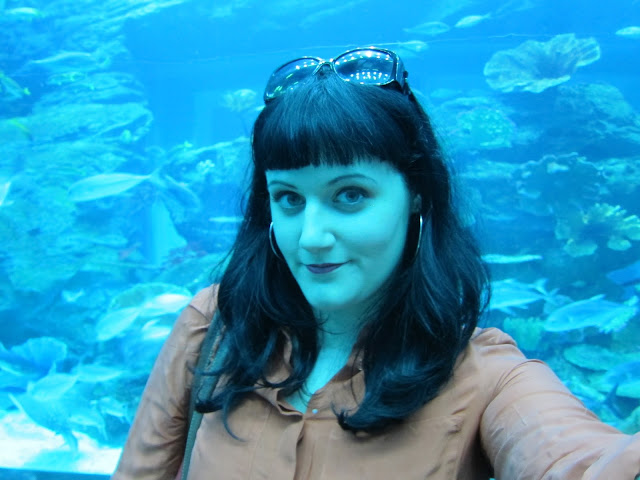 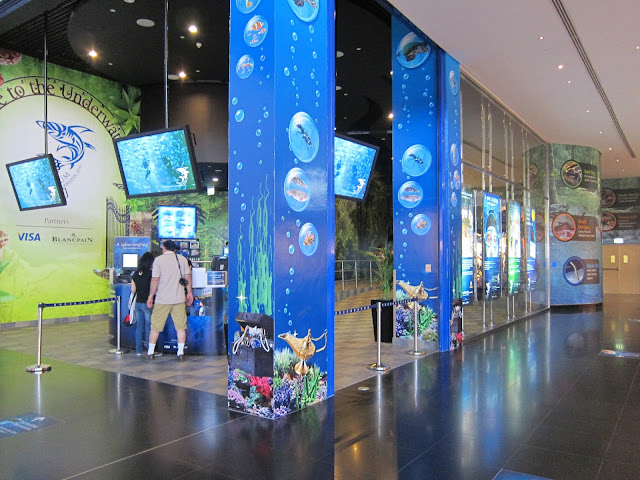 After walking through the tunnel, you must go up the escalators in the mall to the third floor, where you will find the entrance to the underwater zoo.

Now, when they told me I would be getting a "boat ride," I imagined something like the gondolas in Venice, (or well, the Venetian in Las Vegas, more precisely). Rather, this "boat ride" was actually a small indoor ferry that takes you around the surface of the tunnel tank. You have to wear an orange life jacket, in case you fall off the boat. This was  neat little experience, but because it was indoors, the low ceilings made me a little claustrophobic. I really felt like I was floating in a giant fish tank...and, well, I was. 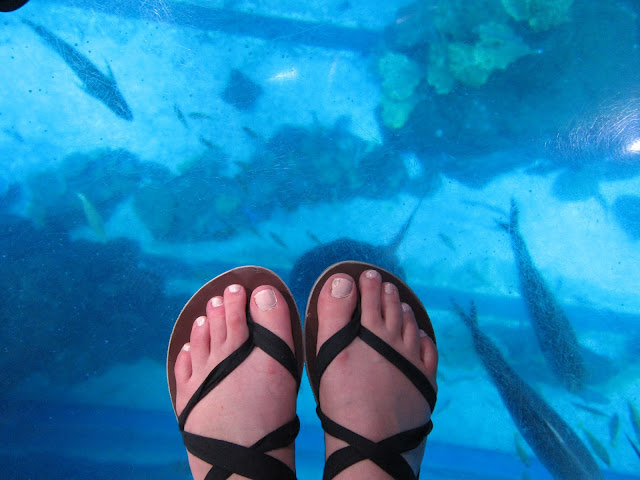 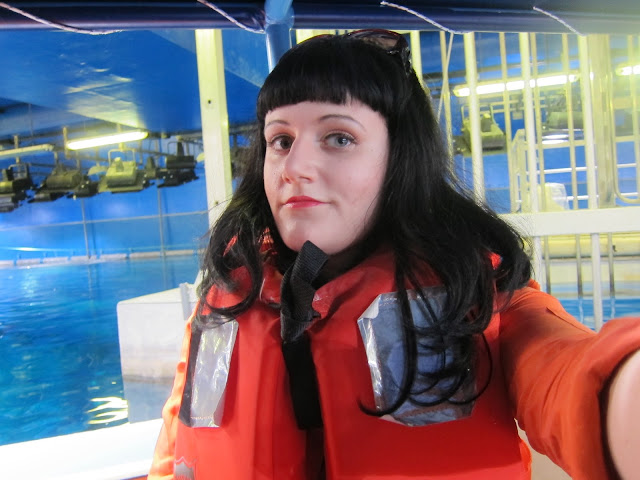 The boat had a glass bottom, so you would see the fish swimming below your feet. This way way, I got to see the tank from the side view inside the mall, from below inside the tunnel, and now from above on the boat. 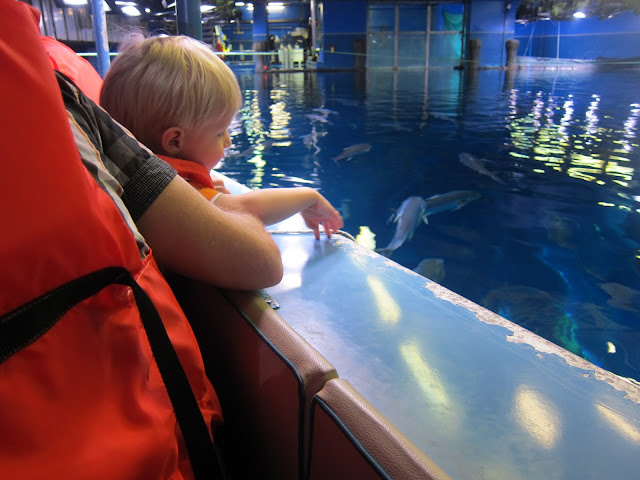 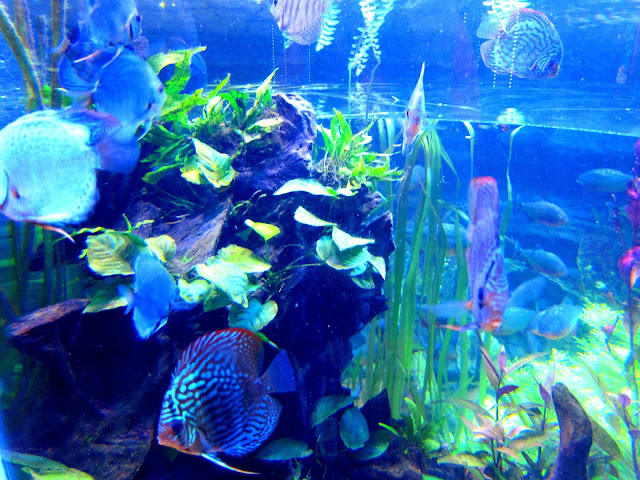 My favorite part of all aquariums are the colorful sea animals. Dubai had no shortage of these, except that many species were not local. That's always the funny thing about zoos and aquariums, they look almost the same over the whole world, all with the same foreign species. 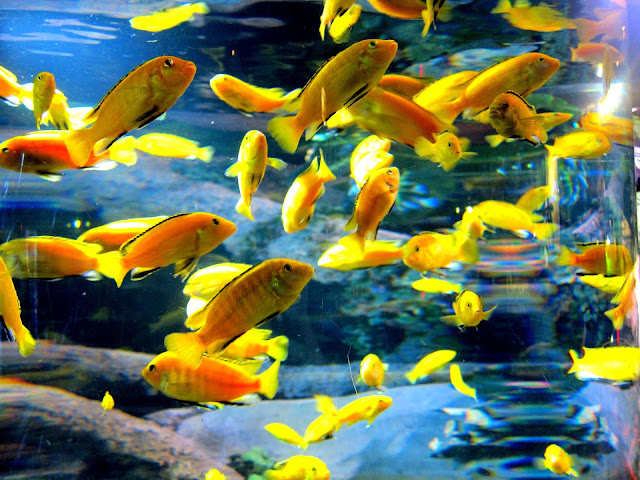 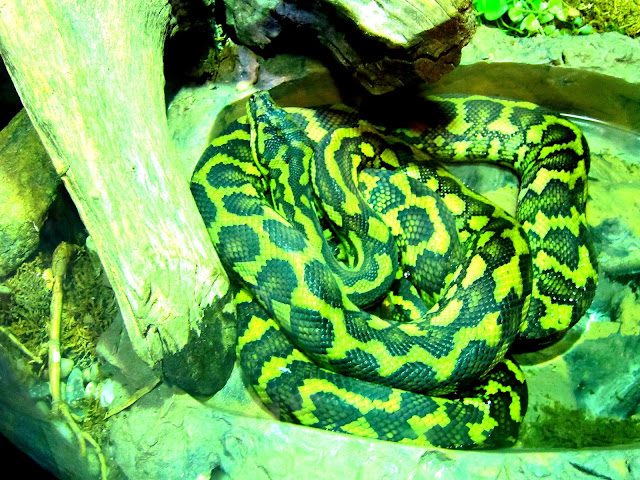 Like other aquariums, Dubai not only had sea animals, but also reptiles, insects, and mammals. 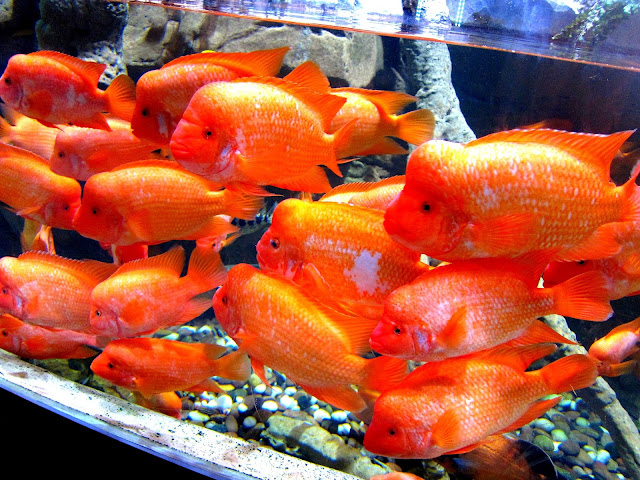 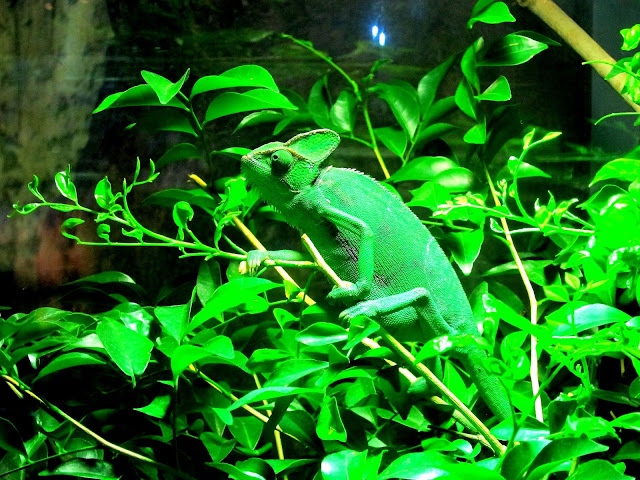 One of the first exhibits contained Nutria, which are gigantic rats with orange teeth (I mean, bright-ass orange teeth). Ironically, there are tons of nutria where I am from in Oregon. 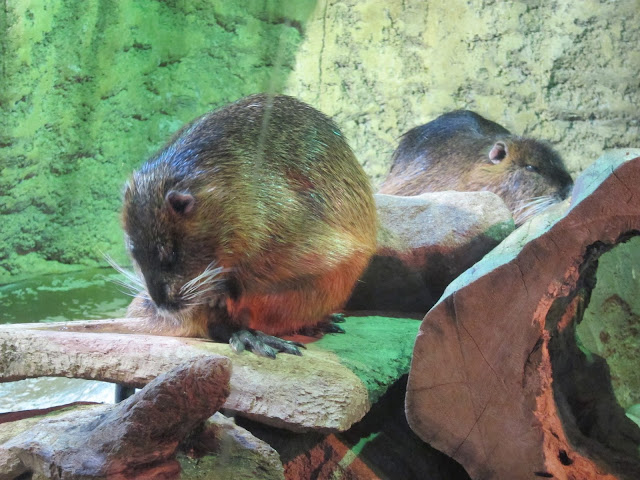 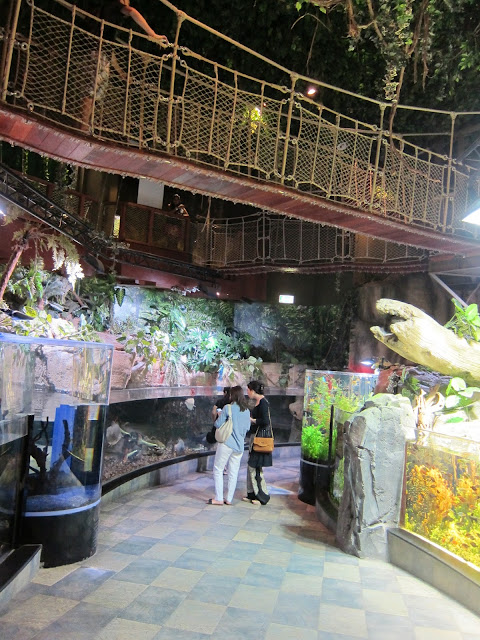 The underwater zoo itself consisted of two levels, a lower level with large tanks, and an upper level of swaying bridges and smaller insect exhibits. See all those lush green vines? Yep, they are all fake. That was a bit disappointing because I always thought that if a place has real animals, it should have real plants too, but apparently that is not the case in Dubai. It is an aquarium in a mall, after all. 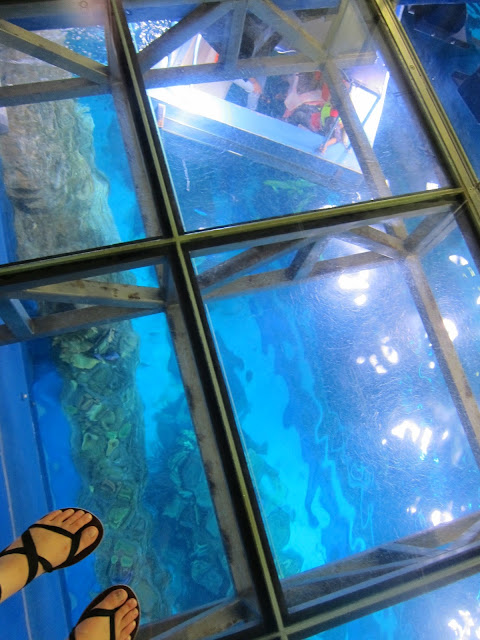 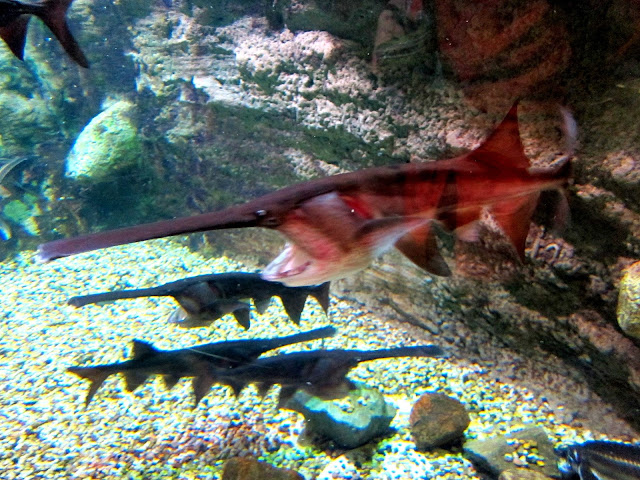 By now you have probably realized that my obsession with documenting aquariums is a rather superficial one. Rarely do I provide any enlightening information on the various species at each aquarium, their habitats, and other interesting scientific trivia.
Nope.
It's all aesthetics for me.
My love of aquariums is not one of scientific curiosity, but rather a fascination with our  strange and colorful counterparts underneath the sea. To think, without technology and a bit of effort, we would not be able to see these glorious creatures in their habitats, fascinating as they are.
It is images like the lionfish, that seem to leave the most profound impressions on me. 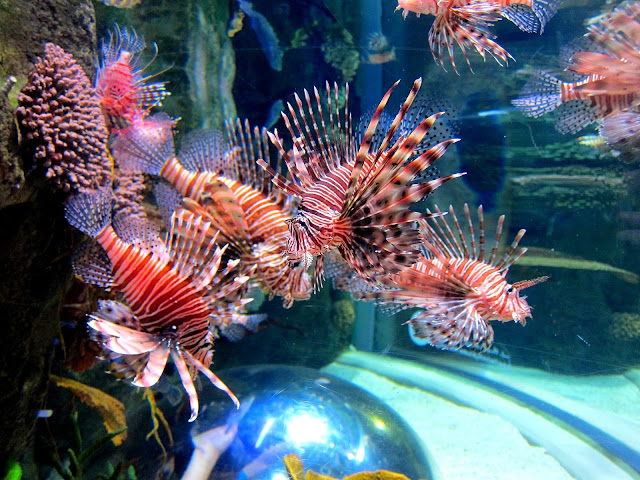 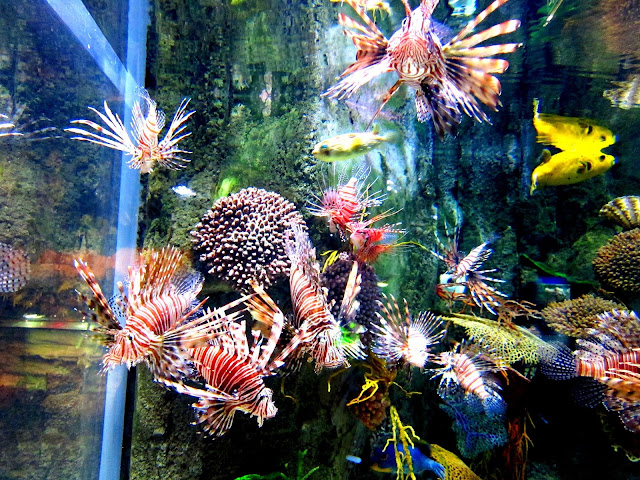 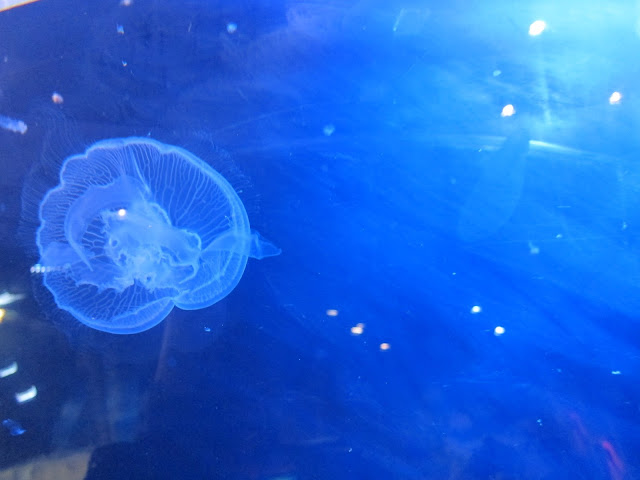 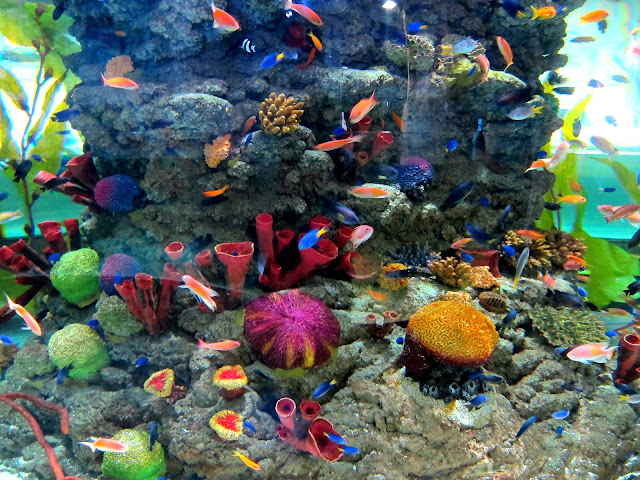 I remember seeing these Japanese spider crabs in the aquarium in Osaka. I know they live in the deep sea, but this is almost enough for me to never want to go near a Japanese beach. 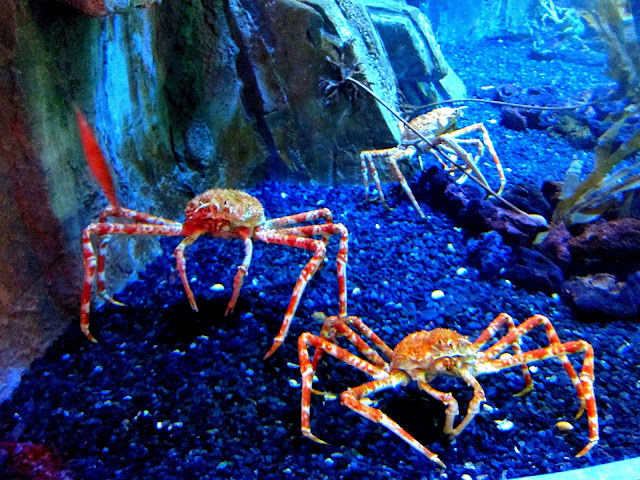 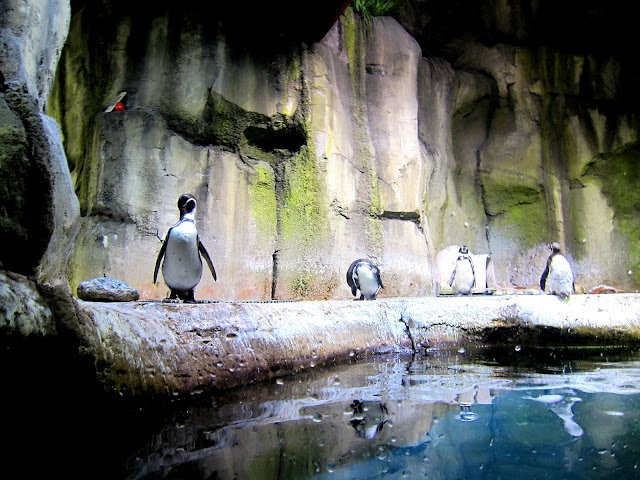 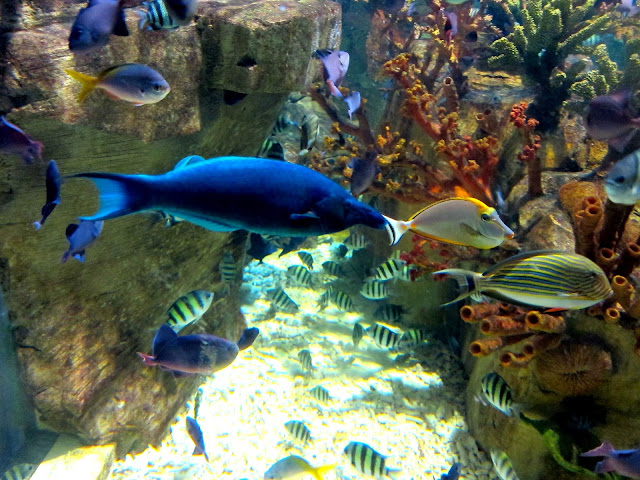 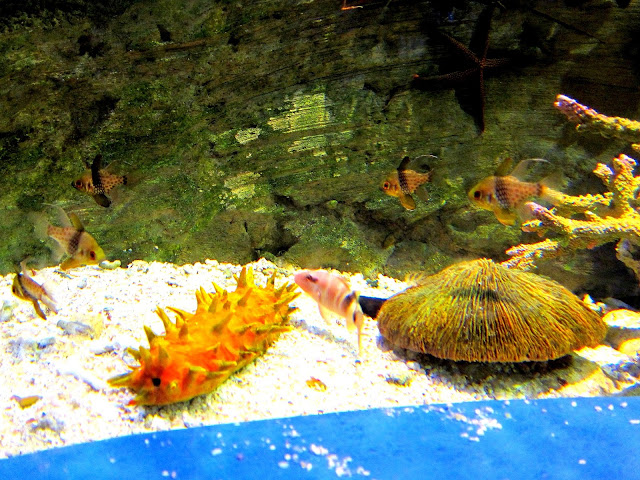 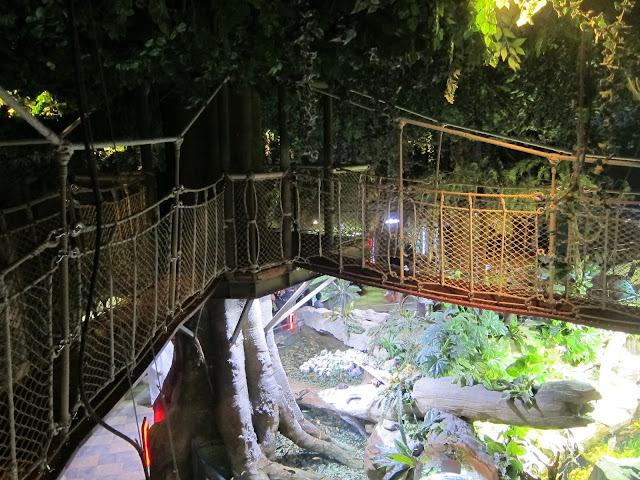 In all, I spent about $30 USD and 1 hour in the aquarium, and it was a memorable experience. To me, the aquarium mirrors many of the traits of Dubai. An extravagant  glass tank, like the ostentatious commanding buildings of Jumeirah. Fake plants, like the fake trees and flowers along the sides of highways, mirages in the desert. Visitors of all kinds, British girls in mini skirts, ladies in black abayas, like any street in Dubai you are confronted with an array of cultures and images, trying to find harmony among each other. 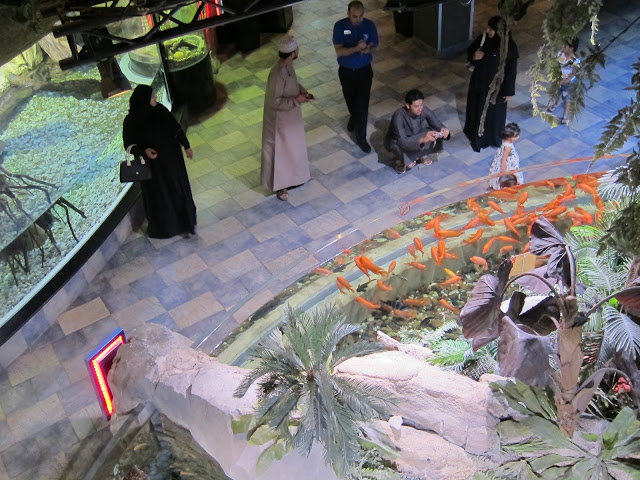