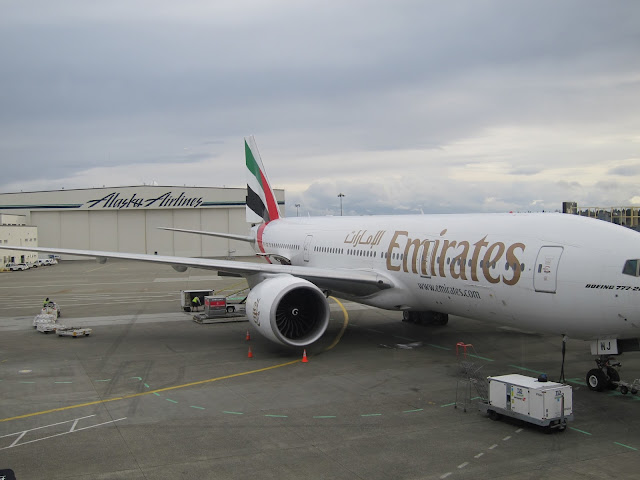 "The cherry blossoms had just begun to open when I left Portland this afternoon. I caught sight of them only as I walked to the train station on the way to the airport. Had I chosen to drive, I may not have seen them at all.

"12:30 pm. It was a wonderful time to depart. Not like the hurried goodbyes in the pre-dawn hours of a morning flight, or the slow, sad partings of an evening flight, when you are already tired of saying goodbye countless times all day.

"A mid-afternoon flight gives you just enough time to rise naturally, eat a light breakfast, talk and relax as though nothing particular was occurring that day. The hours pass uneventfully. You languidly make your way to the airport with no sense of time. Before you are fully aware of it, you’ve boarded a plane and now your fate is in god and the pilot's hands.

"When I travel alone, all my idiosyncrasies manifest into observable features. For example, I find that when I am alone I can seldom fully comprehend something unless I say it out load. So there I am in the Seattle airport, reading aloud the sign that says, 'Emirates Airlines is located in terminal S' as though it were my second language. As though I was reading it aloud to an illiterate person.
It's going to be a long day."

If you are flying to Dubai, Emirates is the way to go. For what I paid, I had a non-stop 15-hour flight form Seattle to Dubai on the 4th safest airlines in the world. I can not imagine spending 15 hours on any other plane. Also, it's not like I had to splurge to get this ticket. For only $200 more I avoided 3 layovers on United, or 12-hour layovers in Amsterdam on KLM. I left at a comfortable 2:30 pm and arrived at a breezy 7:00 pm Dubai time. 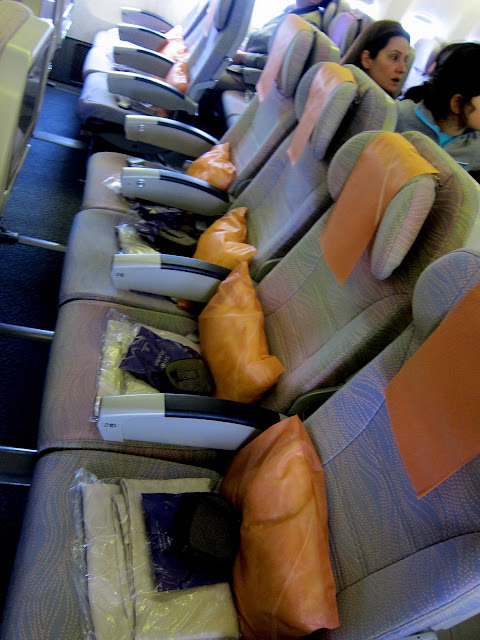 Of course, Emirates airlines is famous for its first class cabin, which features fully enclosed cubicles for each passenger, and a standing bar. If I were going to splurge on a first-class ticket, I would want to do it on Emirates. However, that time has not yet come for me, and I'm still blogging from economy class. 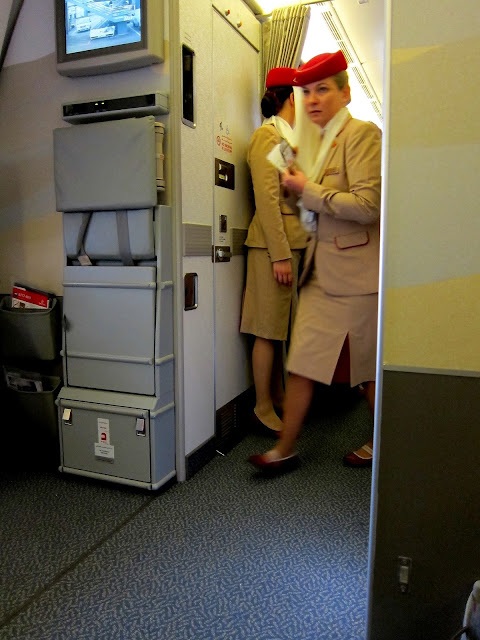 My experience on Emirates was really on par with my flight on Korean Air or Cathay Pacific. However, there are a few things that sets Emirates apart from its competitors. They are sort of small  details that you probably only notice 13 hours into a 15-hour flight, when you are sleep-deprived and crazy, but I appreciate them nonetheless.

The lighting of the cabin mimics the rising and setting of the sun. At twilight, there is a faint orange glow to the cabin, which is very relaxing compared to the usual florescent lighting in most other airlines.

At "night" the cabin darkens and fake constellations are visible. I tried to see of I could spot any patterns (I was pretty bored) but from what I can tell they did not make too much of an attempt to imitate the real night sky.

It might sound crazy but I don't always get a menu on international flights. I have memories of United airlines flight attendants saying "Chicken or Beef?" "Tori or niku?" on a flight from Japan. I swear Tori and Niku where probably the only two Japanese words they knew. 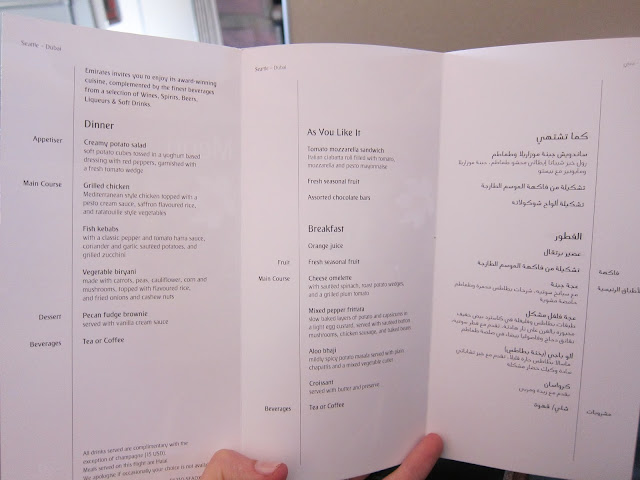 You won't find this on any American airline carriers! But from what I have heard the other top airlines like Singapore Airlines all offer free booze, but I realize that the last time I flew one of these airlines I was under 21! This time around, I was sure to take advantage of this. 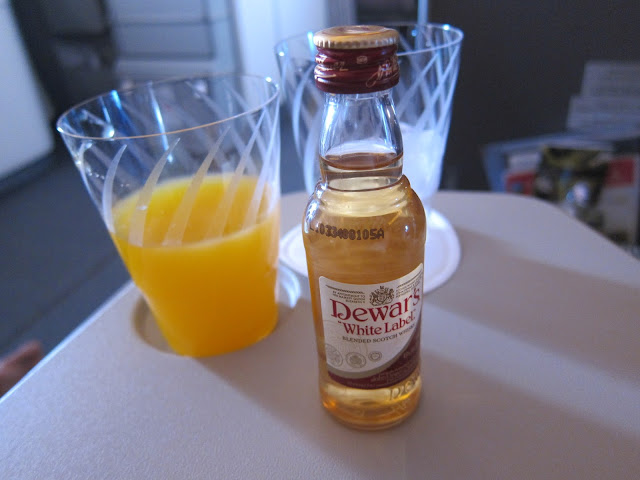 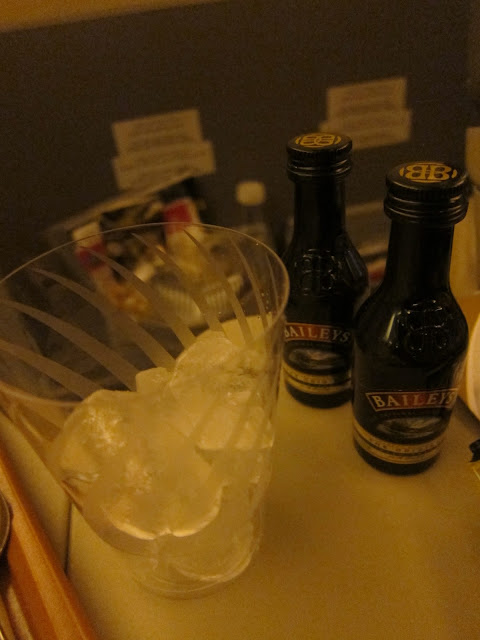 Here was a picture of my food. It was actually quite tasty, but I have since decided that I just can't stomach plane food. I would starve myself for 15 hours just to have Panda Express at the airport. However, if you are one of those people who can eat on a plane without throwing up, Emirates has pretty decent food. 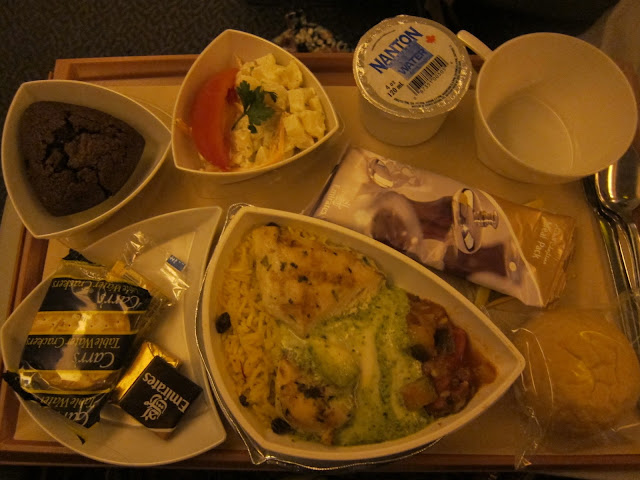 See that basket-looking attachment to the wall? Somebody's baby is in there. This particular baby actually belonged to an Iranian couple sitting next to me. This is awesome because that 7-week old baby slept peacefully the entire flight, as opposed to having a parent awkwardly hold him for 15 hours. If I travel with a tiny baby, I'm going to fly Emirates so I get a bassinet. 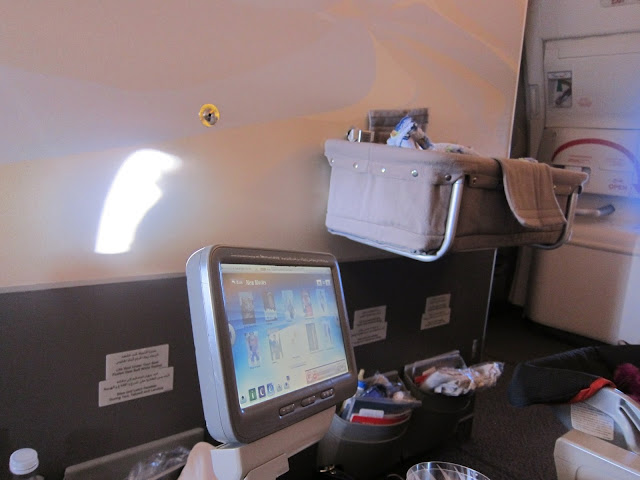 15-hours was my longest flight so far, and I got bored as hell. I'm giving Emirates credit because they tried to entertain me, but there is only so much they can do for a nauseated flight-insomniac like me. On the flight to Dubai alone I watched Looper, Beasts of the Southern Wild, Les Miserables, Anna Karenina, Life of Pi, and a really low-budget horror movie. 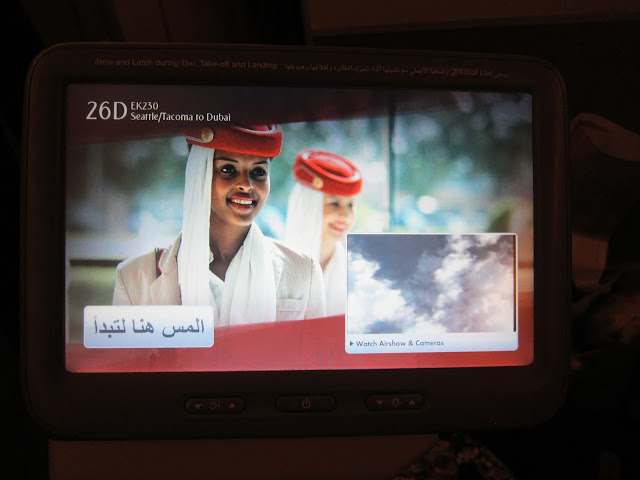 There were a lot of other great things that I did not get the chance to photograph:

6. Air Freshener in the restrooms.
7. Hot towels given to you before the flight takes off.
8. The diverse air crew. Our flight crew spoke Arabic, English, Urdu, Japanese, Vietnamese, French, Italian, German, and Czech. Not surprisingly, not of of the flight crew on my plane from Seattle to Dubai was either American or Emirati.
That's Dubai for you.

Here's a question I get all the time.
When you fly from the U.S. to Dubai, do you fly over Europe, or Asia?
Answer: Neither.
From Seattle we flew straight up over the north pole. Makes for a bumpy ride, but supposedly it is shorter...