Train from Yangon to Mandalay: A Once in a Lifetime Experience


When I stood in line at the security checkpoint at PDX on a one-way ticket to Indonesia, I got to talking to other travelers. Hen I told them I was embarking on a multi-month journey through SE Asia the response was usually this: “That’s a once-in-a-lifetime experience!” I know this was meant to encourage me, to make me feel special for the great experience I am about to have. But instead it made me feel uneasy. I interpreted it as a foreboding statement, suggesting that I will never do anything this cool again. I'm only 27. I don’t want to think of this travel experience as the last in my life. Rather, I consider it a first-in-a-lifetime experience. That sounds better to me.

I was reminded of this statement on board a train from Yangon to Mandalay. Between those harrowing moments of jerking and thrashing, the phrase took on a new meaning. “I hope this is a once-in-a-lifetime experience,” I thought. Meaning: I hope this never happens to me again.

I was prepared for this trip. I knew what I was getting into. The train tracks haven’t been repairs since the British left. The train was noisy, bumpy, dirty. I thought I was prepared for it all. I even read this woman’s account of her Myanmar train experience and thought, “I can handle this.” Well, handle it I did, and would I do it again. Not a chance.

This was absolutely the worst en-transit experience I have had in my life, topping even that of my turbulent Emirates flight over a sandstorm in Saudi Arabia, or my nauseating bus ride through Mexico, in which I vomited six times between Guadalajara and Guanajuato. This train ride in Myanmar was somehow far worse.

We arrived at the station at 4:00 pm, one hour earlier than the scheduled 5:00 pm departure. The train was already at the platform, and we got on. Upon being shown to our berth, we were relieved to find that we were in a first-class sleeper, and instead of sharing a four-berth room with two strangers, we had a two-berth room to ourselves! Sure it was old, dirty, in a state of disrepair, and an ungodly mint green color, (a color that will likely produce nauseating sensations in my stomach from here on out), but at least it was ours! 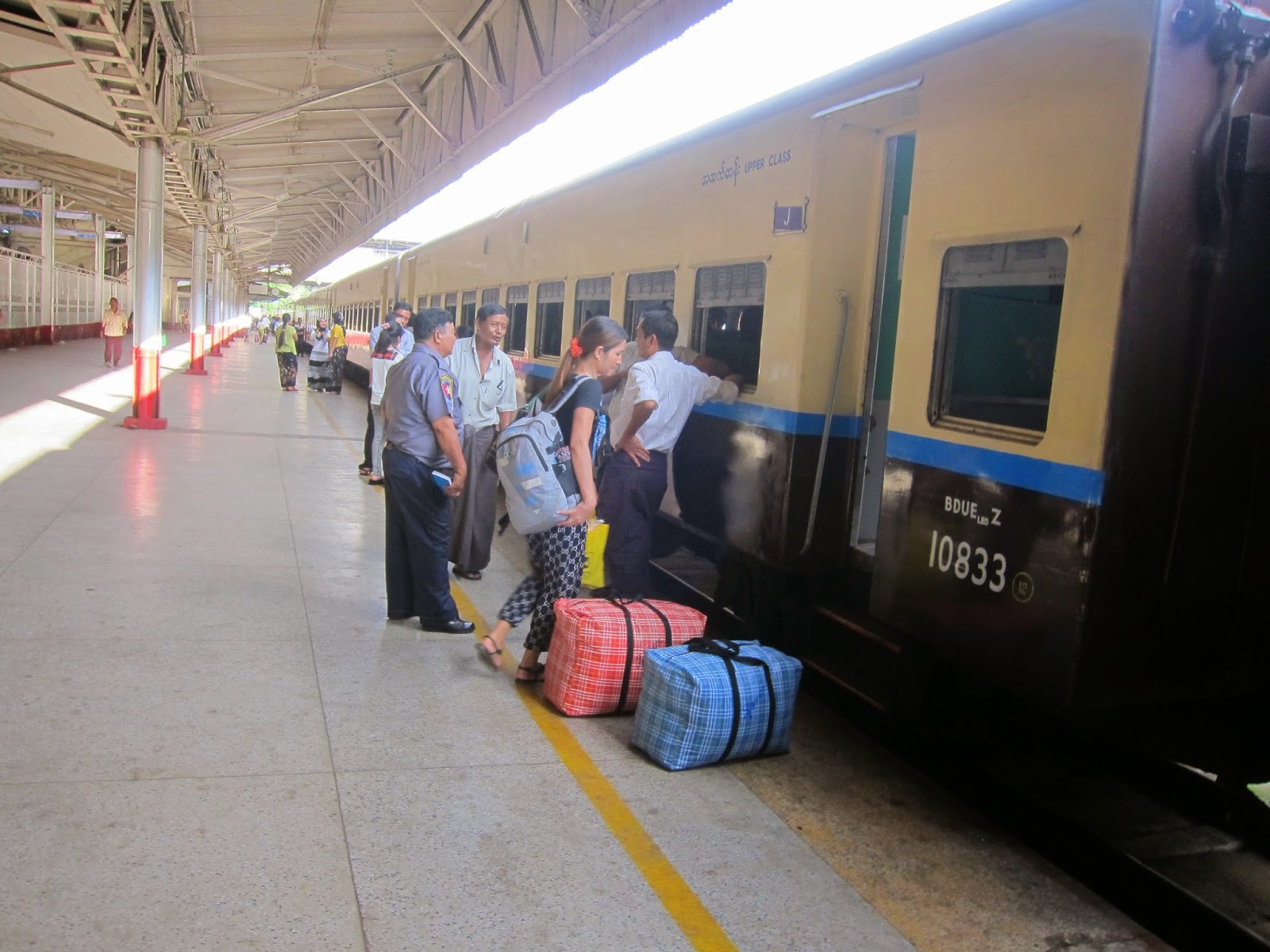 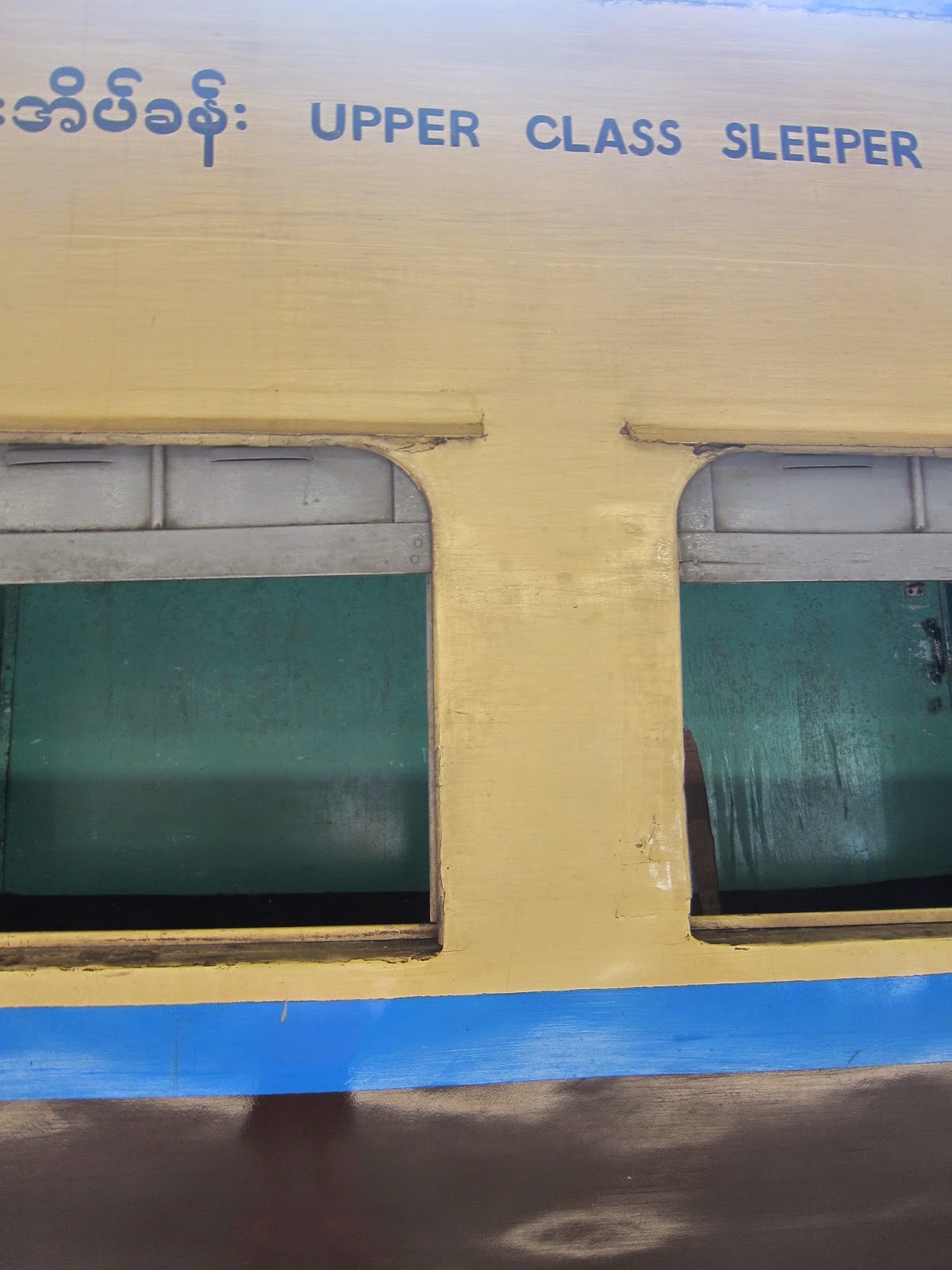 The joy evaporated pretty quickly when I counted the number of spider and cobwebs in the berth. Either no one had slept in or cleaned this berth since the 1960s, or the spiders in Myanmar were incredibly efficient. I counted no fewer than 15 creature guests in our tiny berth, and multiple thick, white gooey webs. I twirled the end of my umbrella around the webs and shook them off out the window. Around this time two young girls, no more than 8 and 14 years old, entered our berth and tried to sell us bottled waters and snacks. The girls were very amused at me freaking out over the webs, and began to pull them down with their bare hands. I had no idea how I was supposed to actually sleep here. 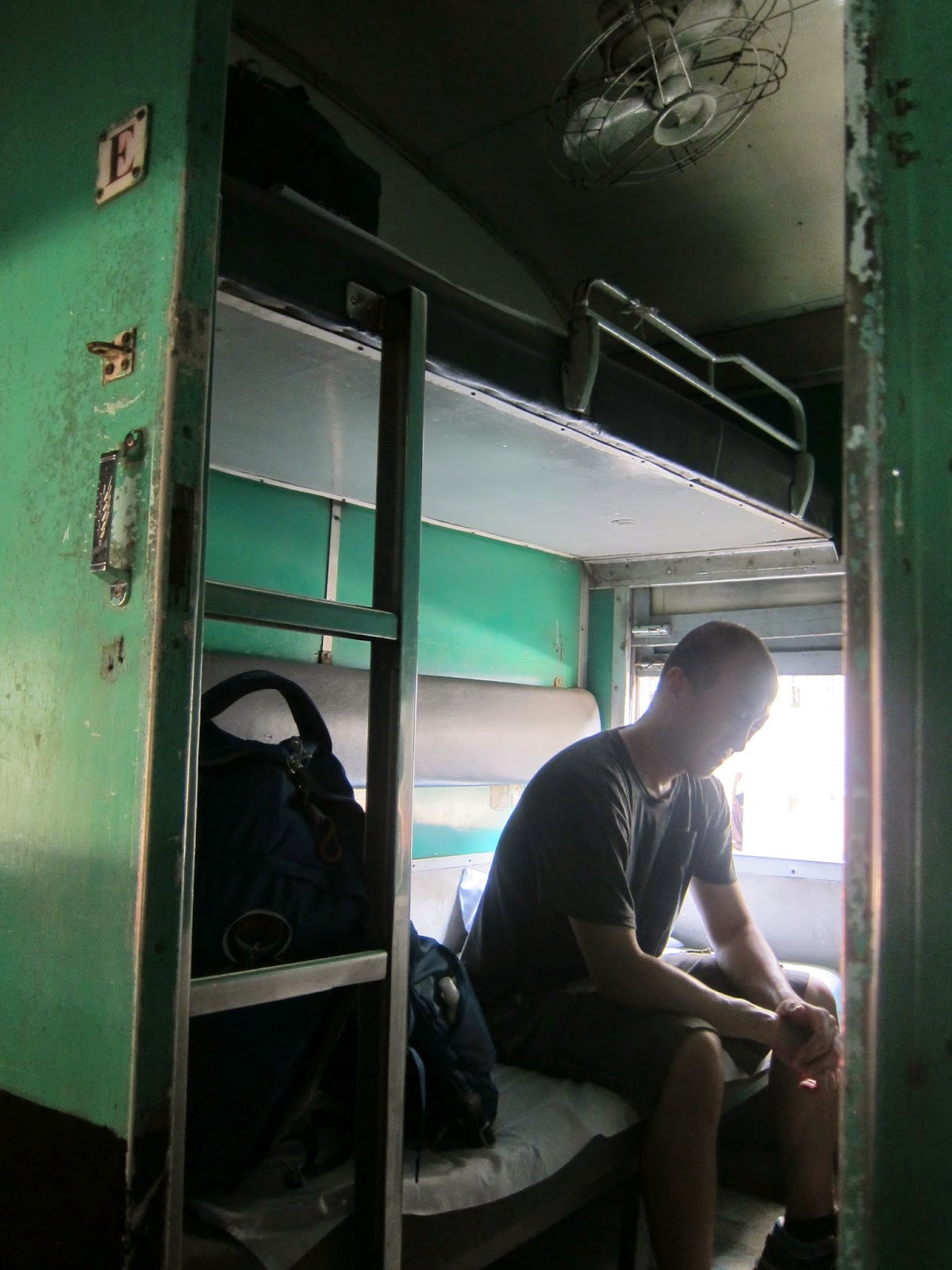 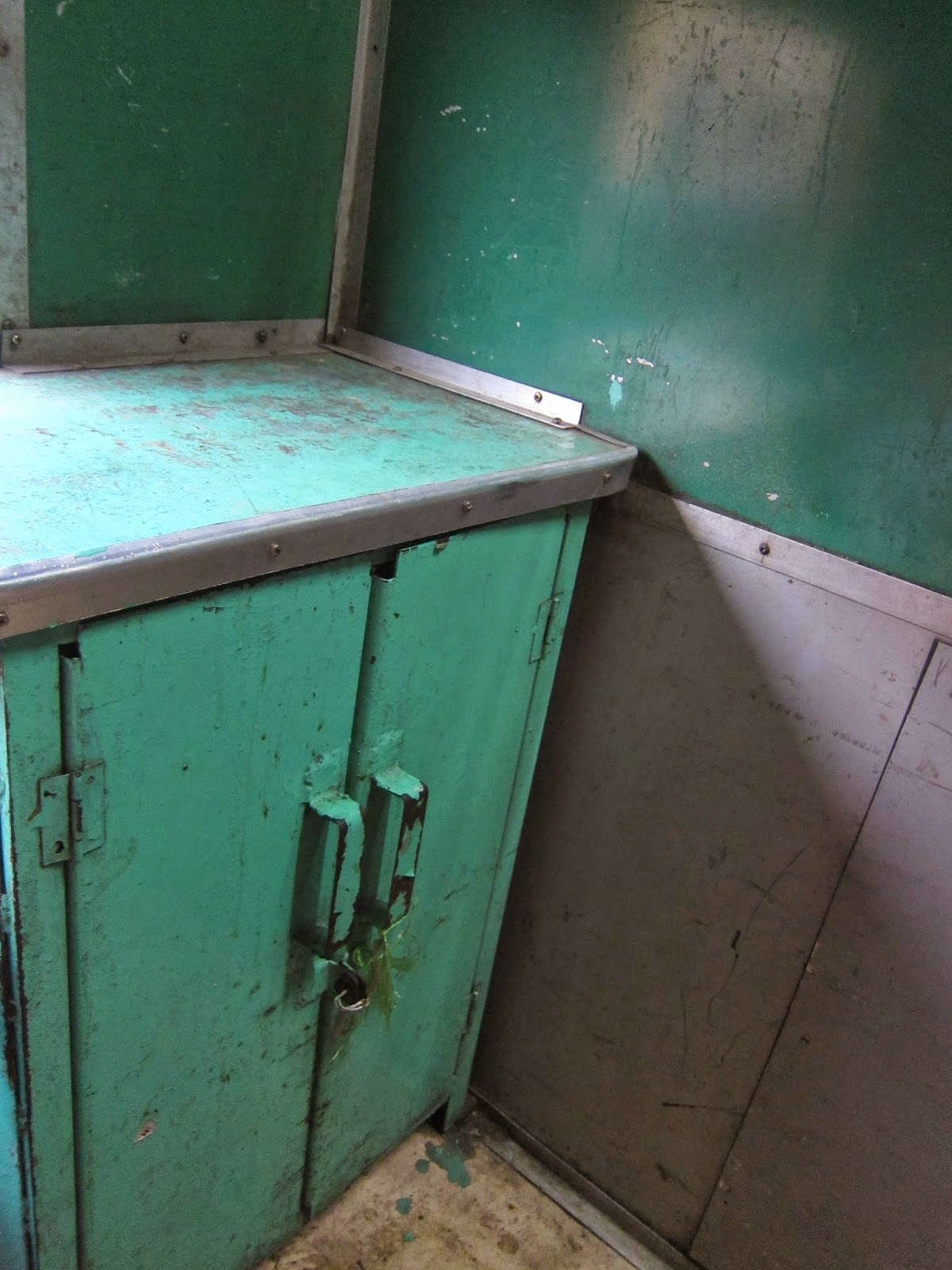 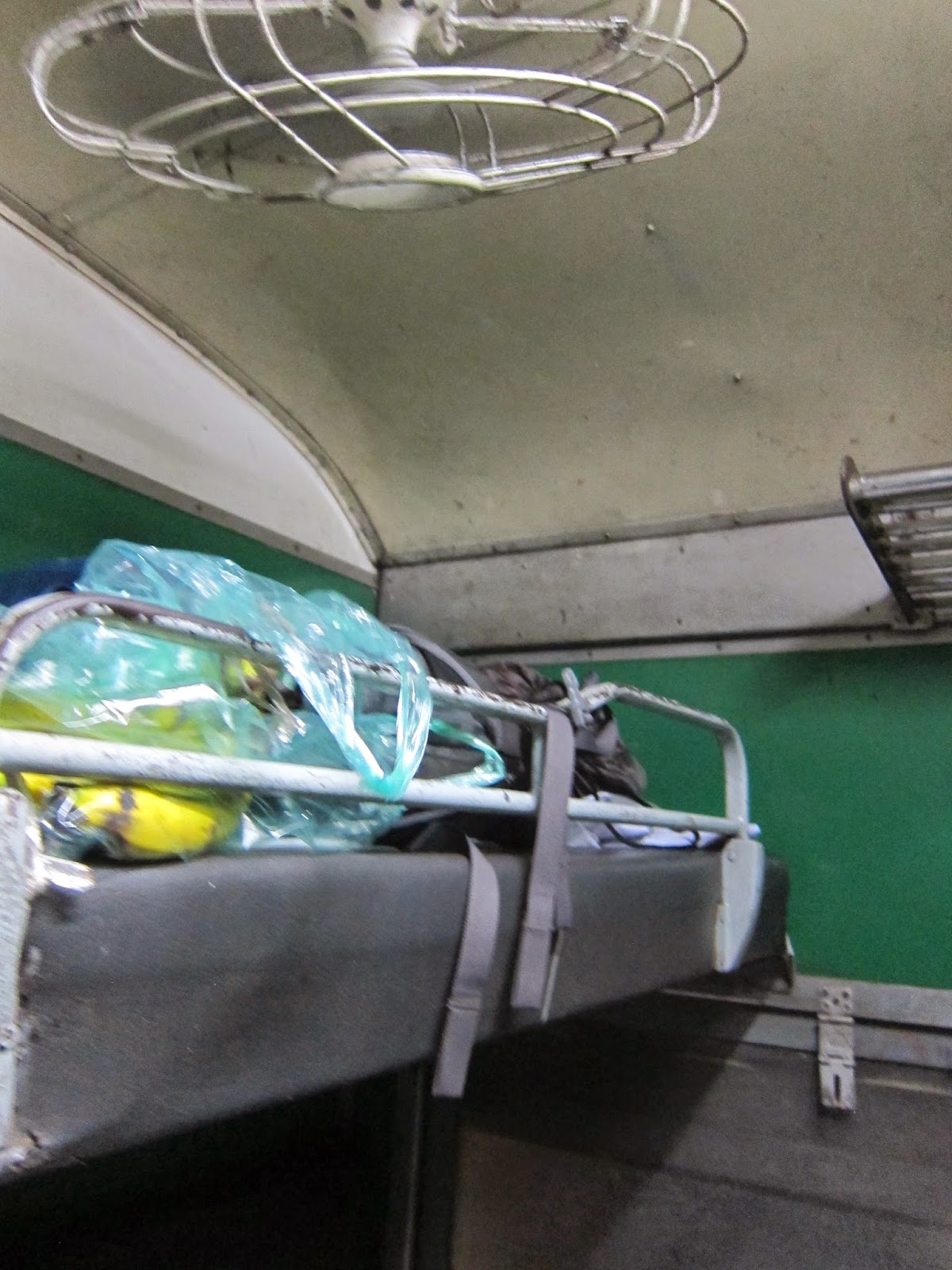 After an hour of waving off vendors who boarded our train hoping for a sale, we took off at 5:00 pm, right on time. At first the journey out of Yangon was slow. A little bumpy, but no more so than I had experienced on other trains. And those bumps were pleasant. I took out my iphone and began videotaping the view from my train window. A few seconds the train picked up speed, then went over a series of bumps and my entire body was lifted from the seat. My iphone was almost torn from my hands and sent flying out the window. Almost. “So this is what they were talking about….”

As night feel my partner and I clung to each other on the lower berth and watch the sun set over the rice fields of Myanmar. It was an astonishing sight. The ride was too bumpy for me to pull out my laptop and take notes on the computer, so I made voice recordings of my observations into my phone.

“Today I am looking out on this scene, tomorrow it will be another pair of eyes.

I watch dusk unfold over the countryside, the unlit countryside, occasionally  there will be a pair of headlights in the distance, a car, but other than that there is only lightening. The sky is still cerulean blue, the grass and trees have already darkened in their hue but I can see lightening across the rice fields. It glows orangish-pink, it lights up, always in the center, framed by the train window. like the flicker of a candle flame across a deep navy blue sky.”

These moments were beautiful. Holding my love in the darkness of our train berth, watching night fall upon the plains of Myanmar with a storm brewing in the distance. Still wrapped up in each other’s arms, we drifted to sleep.

An hour later we were awakened by a thrashing. Both of us were lifted up from the lower berth and thrown again the wall. We almost fell off the bed were it not for our reflexes kicking into action and firmly gripping the ladder on the side of the bed. I squeeze my eye shut, pretending it was nightmare. It was a nightmare. But a real one. Our 10 kg backpacks, which we had placed on the top bunk, were thrown over the railing and landed straight on the  ground beside us. I can only imagine what would have happened if one of us was sleeping there. After what seemed like a whole minute the turbulence stopped. The train slowed down as we neared a station. It was 9:45 pm.


While we were stopped at the station the two of us sat up on the lower bunk, traumatized. Was the rest of the ride going to be like that? Forget about sleep, it would be impossible to walk or even stand up in that kind thrashing. How would we use the bathroom?

“This train experience is pretty rough,” I said in my iphone voice recording,  “I like to flatter myself thinking that I can handle a great deal more than my first-world peers  though I'm nowhere near what some people could do, falling asleep in a dump outside of Algiers like my friend did in the 1970s. I'm not quite there but I like to think I can handle a bit more but this is rough even for my tastes. I don’t mind that the train is old, I don’t mind that it’s dirty, that is a bit gross, and that everything I touch leaves a brown residue on my hands, I don’t mind that. I guess I could even be okay with all the cobwebs laying around and the spiders, which put the movie arachnophobia to shame. I could even be okay with the bumpiness. But its all of it. It's the dirt, the grime, there no running water, the spiders, the bumpiness, all of that together. It is definitely rough.”

When the train started up again we braced ourselves for further trauma. As it picked up speed, so did the bumps, but they were nothing like that one-minute-of-terror we endured earlier. We slept for maybe 30 or 40 minutes at a time, constantly being awakened by noise and turbulence. When we arrived in Mandalay at 7:45 am, exactly on schedule, it was like we had been delivered from evil.

I can absolutely state that it was impossible to get up and use the bathroom on the train for at least 70% of the ride, due to turbulence. It was also nearly impossible to brush my teeth or change clothes during the ride. Furthermore, I cannot imagine how someone would be able to consume food or liquid on that train. You can’t hold you body still even if you want to.

In conclusion, I am glad I took the train. Even though Anthony Bourdain and the entire internet told me not to, I am glad I did it, if only to see the countryside and share a peaceful moment with the person I love most in this world. But I would not wish that ride on neither enemy nor friend, and I will never, ever, do it again. And that is what I would consider “a once-in-a-lifetime experience.”
at April 26, 2015