A food tour of Greece 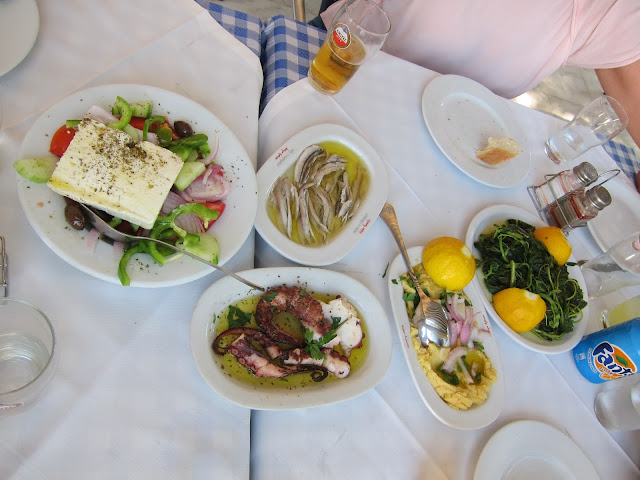 I'm a bad tourist. In Chiang Mai, Thailand, one of my favorite place to eat was a hamburger joint. In Japan, all I wanted was coffee and Thai food. And my best food memory of Iceland is actually that of Indian food.

But for perhaps the first time in my entire history of traveling, I only ate the ethic cuisine of a country.
I only ate Greek food in Greece.
That was the result, not so much of a conscious decision, as of necessity. Staying with my relatives meant that was all they cooked, and even in Athens we only went to Greek restaurants. 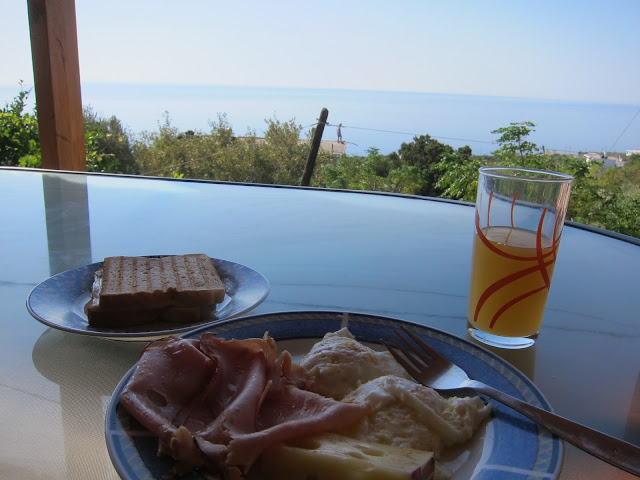 There is plenty of variety in Greek cuisine, and it certainly varies by region and household. That being said, I ate a lot of the same things every day.

Fish, feta, and bread were staples at every meal.

There was whole lemons on every plate.

Meat was rare but when I ate it, it was pork, lamb,  or goat, never beef.

Olive oil was generously applied to every single dish.

These collages are of the foods I ate everyday. I unfairly mixed images of home-cooking with restaurant dishes, but many were similar enough to be compared.

Cheese
Greece has a lot more cheese than just feta – which by the way – means “cheese” in Greek. What I am saying is that there are so many more cheeses than the crumbly goat’s milk. The bottom three cheeses in this photo are homemade, and I had the honor of visiting a farm and peering in through the screens at the cheese wheels, rotting in the summer heat. I was skeptical about the taste, but they were excellent. The image on the top right is of fried cheese at a restaurant, also amazing. 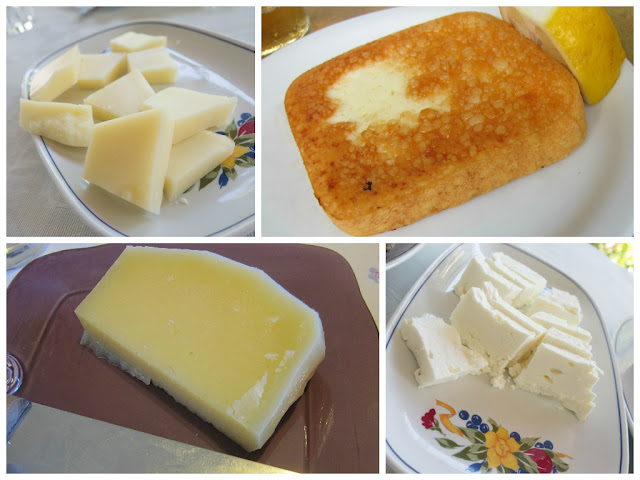 Fish
Every meal I ate in Greece has fish. They neither remove the head nor the bones of any fish, and they are always swimming in olive oil and lemon. Often the fish was fresh and local. 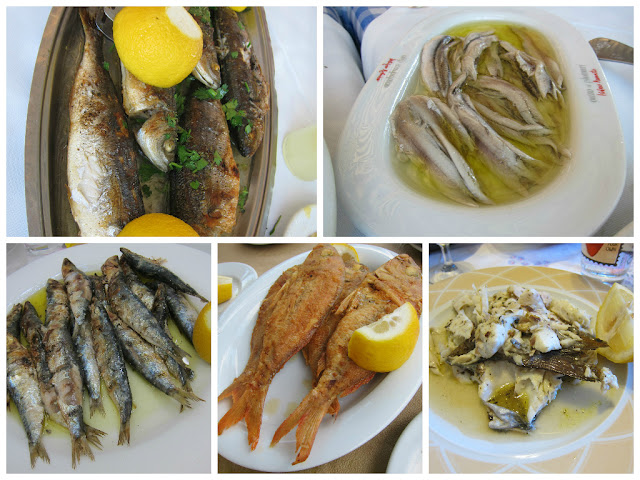 Fries
Fried potato slices or “French fries” as Americans call them are a common appetizer in Greece. No ketchup here folks. Often they are seasons with salt, pepper, oregano, and cheese. 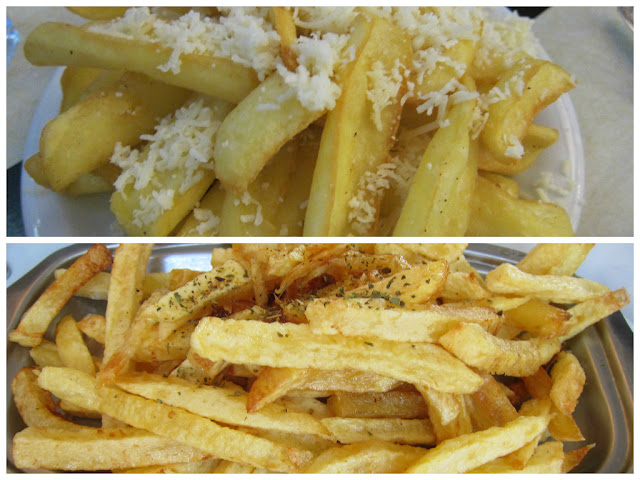 Salad
In Greece salad does not have lettuce. The typical Greek salad is made from cucumbers, tomato’s, red onions, feta, olives, olive oil, salt and pepper. At home the salad is tossed together, but at restaurants the feta often appears as one large block on top. I ate salads every single day in Greece, as they cannot be properly replicated in the states. Greek tomatoes are something special and I have never tasted a tomato in America that was quite like it. Real feta is also hard to find in the U.S.. 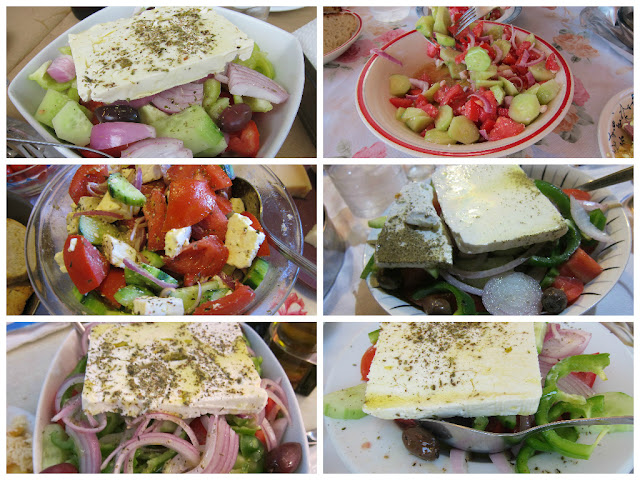 Pastitio and Mousaka
These are lasagna-type dishes which are considered traditional Greek cuisine. Popular with tourists and local alike, you can find them on almost any restaurant menu. Pastitio is a béchamel-based dish, very creamy and cheese, where as mousaka is meat and eggplant-based, and very hearty. 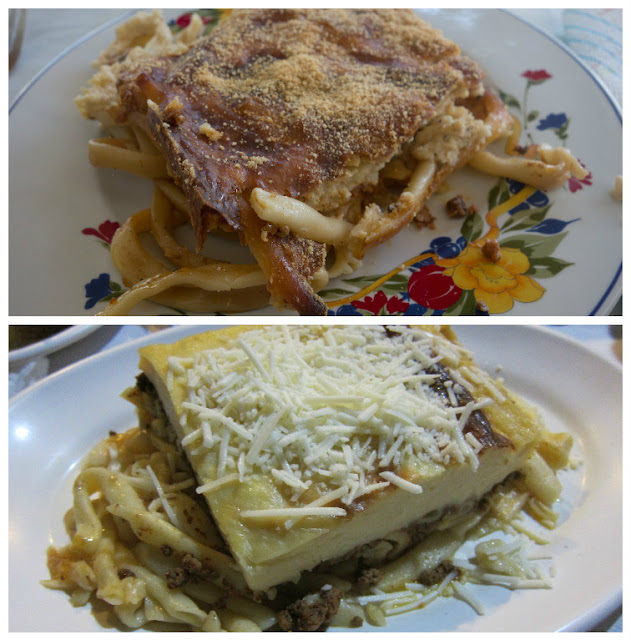 Pita
When most Americas think of pita bread, they imagine a dry round tasteless bread that is used to make gyros. “Pita” in Greek actually means “pie” and has nothing to do with the sandwich bread. Pitas in Greek are pastries of cheese, vegetables, or meat, that are wrapped in a thin breading and baked. They are sold in many pastry shops but I only ate them homemade on this trip. 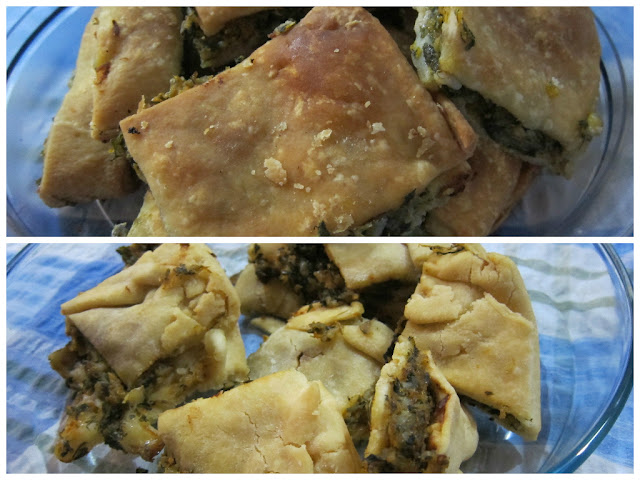 Dips
The first thing to arrive at a restaurant table is bread. To accompany the bread, it is common to order any number of dips such as tzatziki (a yogurt and cucumber dip), skordalia (a fiery garlic dip), hummus, or melitzanosalata (an eggplant dip). 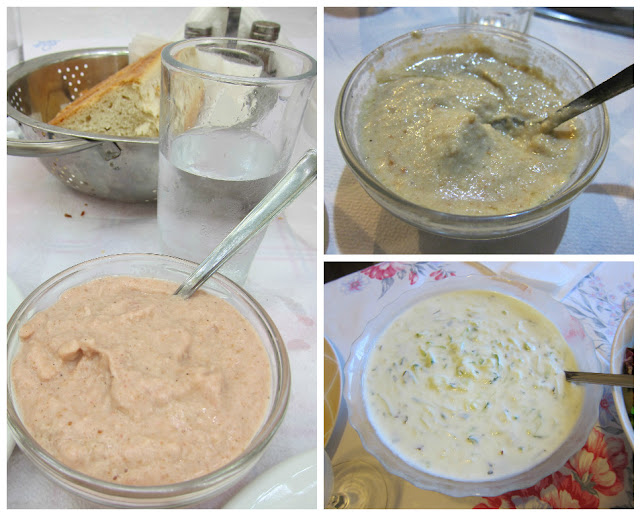 Seafood
Fish or squid are the staples of every dinner. Whether we were at a restaurant in the middle of Athens, or on somebody’s patio on an island, fish was always there. In Greece, the fish is always served with its head, tail and fins in tact. Sometimes it’s grilled, sometimes it’s fried, but you can bet it will always come drench in olive oil with about six whole lemons on the side. 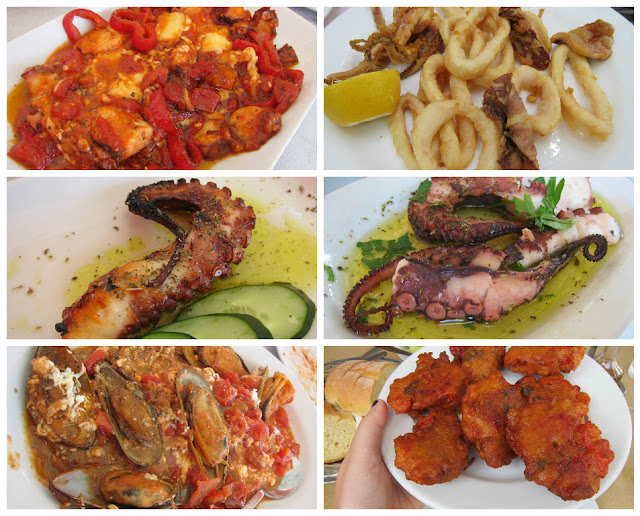 Souvlaki
This popular Greek snack consists of meet on a stick, like Turkish kebobs. It is often eaten along with rice, bread, or wrapped in a pita like a sandwich. Pork, chicken, and lamb are the most common meats (not a lot of cows in Greece). 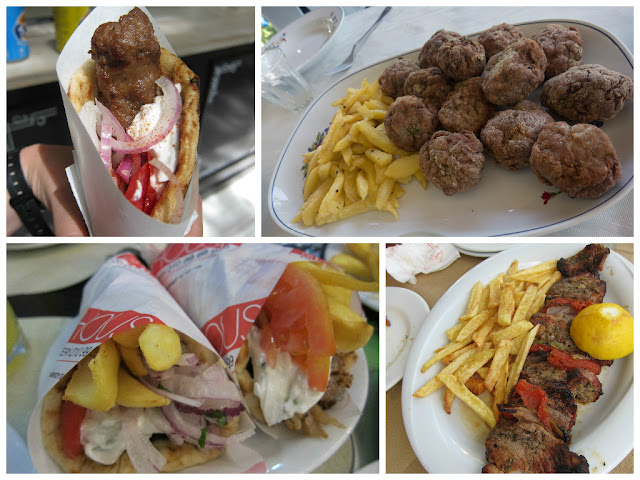 Fruits
Greek fruits are truly amazing. Fresh peaches, ripe figs, plums, and oranges are all in abundance. It depends on the time of year you go but there is surely something delicious growing at all seasons. 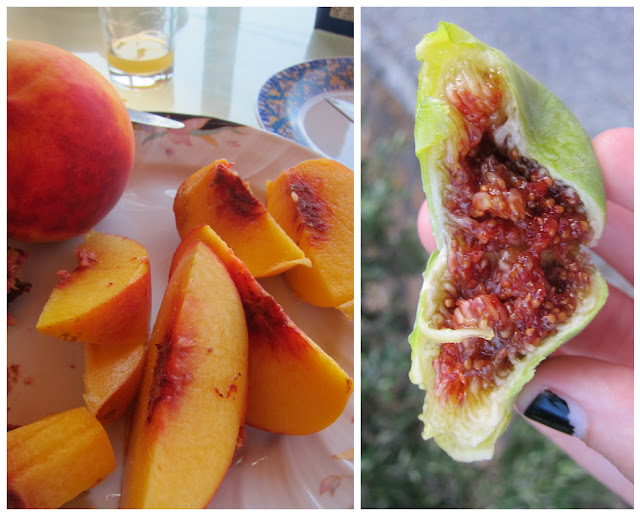 Vegetables
Like fruits, most vegetables are home-grown and organic. With the exception of the Greek salad, Greeks almost always cook their vegetables with olive oil and lemon. 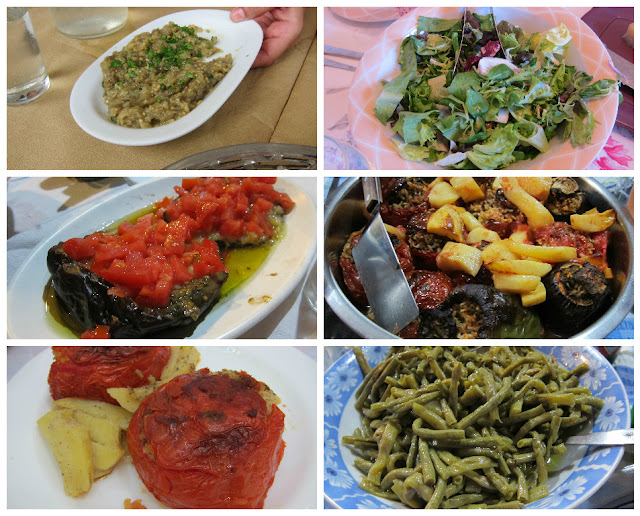 Greek sweet run on the sugary side, and are often a little herby as well. It is common to find them drench in honey or syrup and covered with filo dough or nuts. 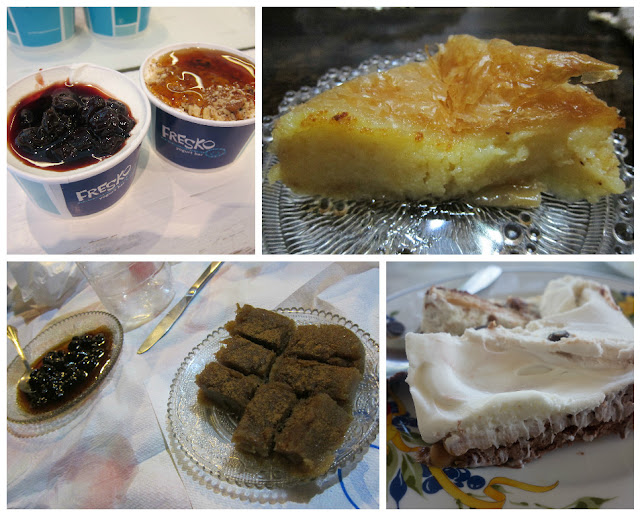 Candy
I tend to prefer Greek candy to sweets. My favorites are loukoumia (Greek delights – like Turkish delights). 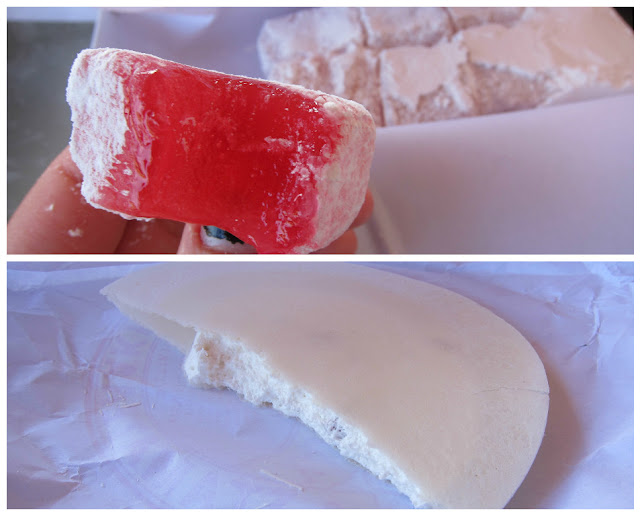 
These  sweets are something unique to Greece. Imagine a jam or other gummy-like substance in a jar, take a spoonful of it, dip it in glass of water, then put it in your mouth. Mastixa, which is one of the favorite “spoon sweets” is a mastic gum made from a tree. It has an herby and sweet flavor. 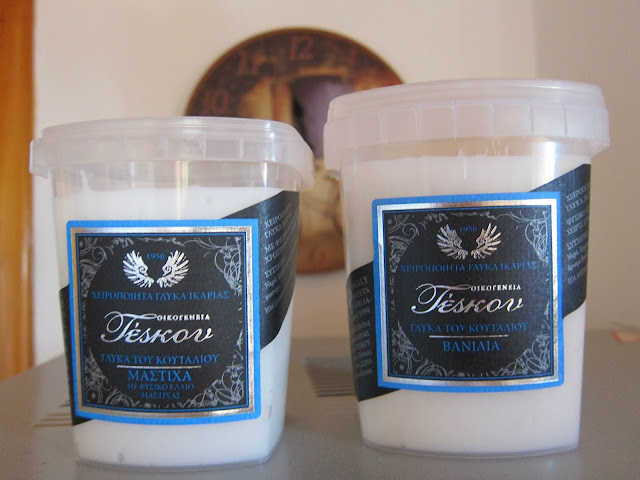 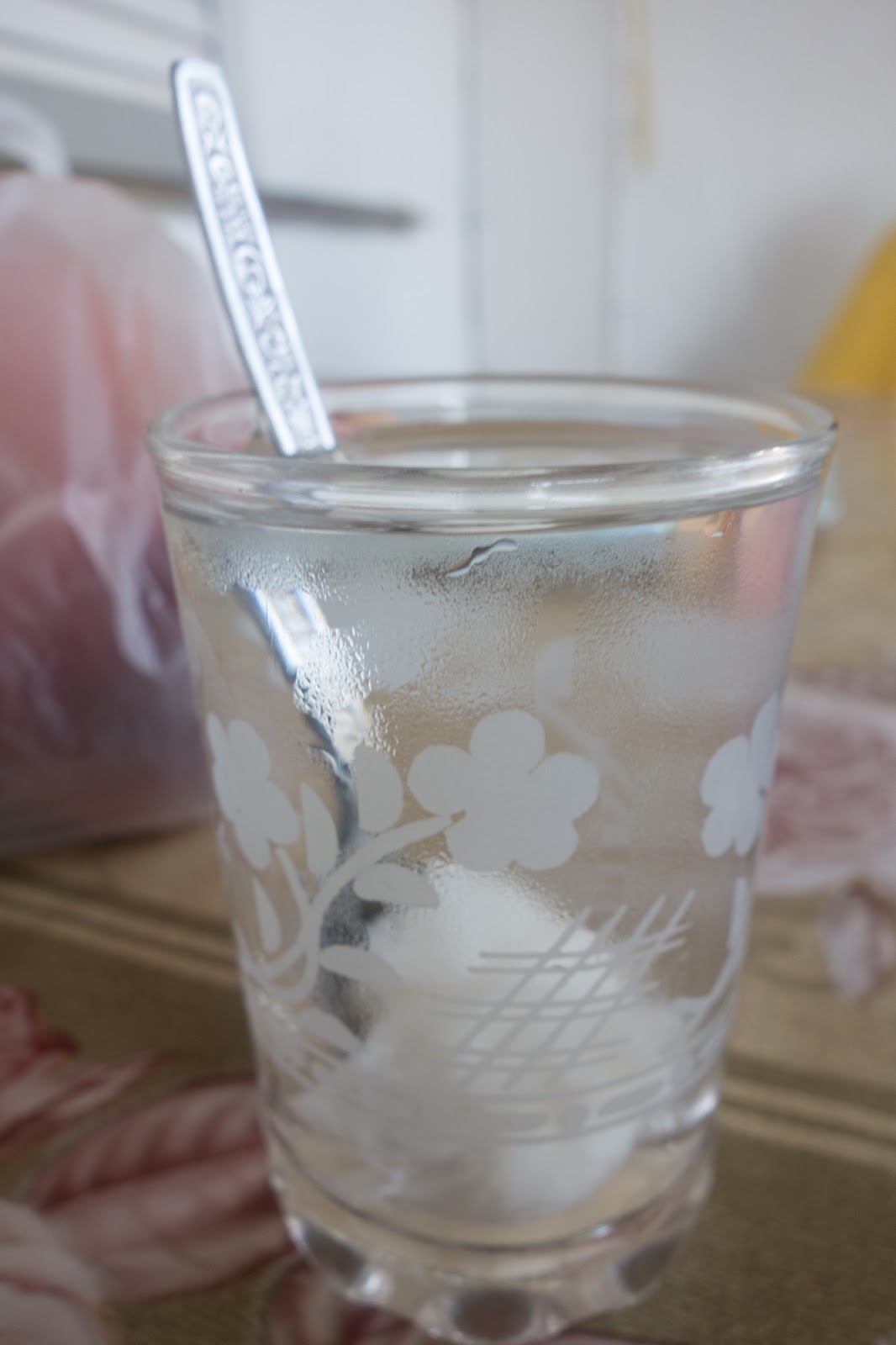