Library at the end of the world: Culture House Eyrartuni 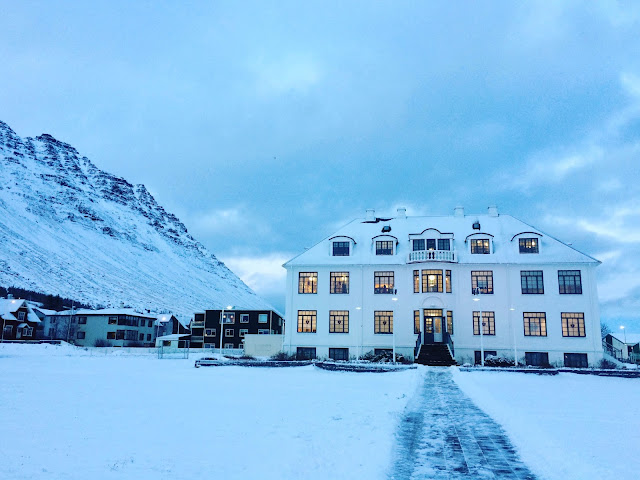 My obsession for libraries, preferably, beautiful and obscure libraries, is well-documented on this blog. Readers should not find it surprising that I’ve made travel arrangements to fairly remote parts of the earth for the explicit purpose of visiting a library.

But what might shock some, and what certainly still shocks me, is that I planned an entire trip after looking at one photograph.

That is the power of a single image. It can move a person miles around the world, put her on a terrifyingly shaky flight, and get her snowed in three days in a remote town.
This is that photograph.

I must have gazed at it a hundred times. Wishing and dreaming to go to the beautiful place where that library is. Wish to be there to take replicate that same photo, and to experience that place. No substitute would do. It had to be that library, no matter remote. It had to be in the winter with the snow, no matter how many flights get cancelled and delayed. I had to have that dream. 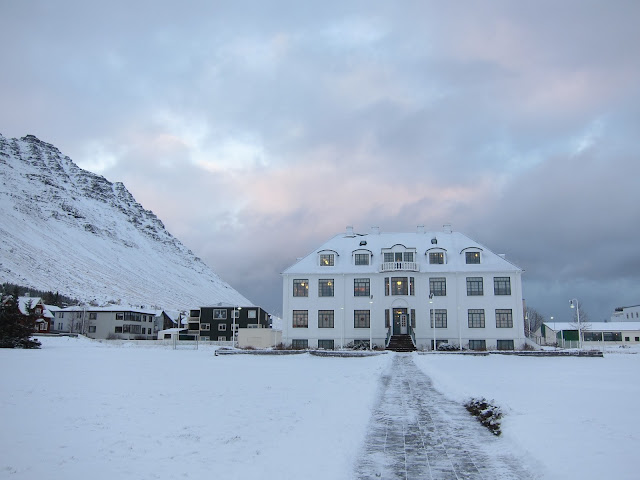 Not surprisingly, Culture House Eyrartuni is not well-documented. It is so obscure that it is not even mentioned on trip advisor as an attraction of any kind. There are few photos of it. It is not mentioned on any blogs, even from tourists who have been to or been through Isafjordur.

For no other reason but to experience this place, I began looking up plane tickets to Isafjordur. The problem was, dometic tickets to Isafjordur were very expensive, almost unreasonably so. For a few months, I gave up my dream. But when I was two weeks away from departing to Reykjavik, I checked ticket prices again, and they had been reduced to a third! I snatched them right up, thinking I would only be in Isafjordur for one night at most. Funny how that turned out….

Now, this trip was risky for many reasons. Iceland is known for its unpredictable winter weather and flights are frequently delayed and cancelled. Also, I was planning to go with no luggage on me, just a day pack and a toothbrush. The website was minimal, and I didn’t even know if it would be open, though they said “daily from 1:00-5:00.” Even if I made it there and it was open, because the weather is such a gamble, I had no guarantee that I would see Isafjordur in my winter wonderland. It may be rainy. It may be so blizzard that I can’t take pictures. There were a number of things that could go wrong.

Thankfully, everything turned out perfectly. Well, at least, where Culture House Eyrartuni is concerned. 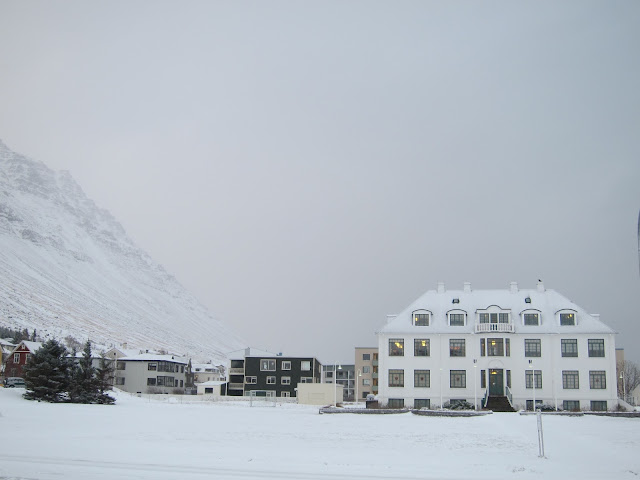 We arrived in the midst of a blizzard, by I hastily snapped some photos during a calm in the storm, I didn’t yet realize that more of the mountain would be visible one the clouds had cleared. 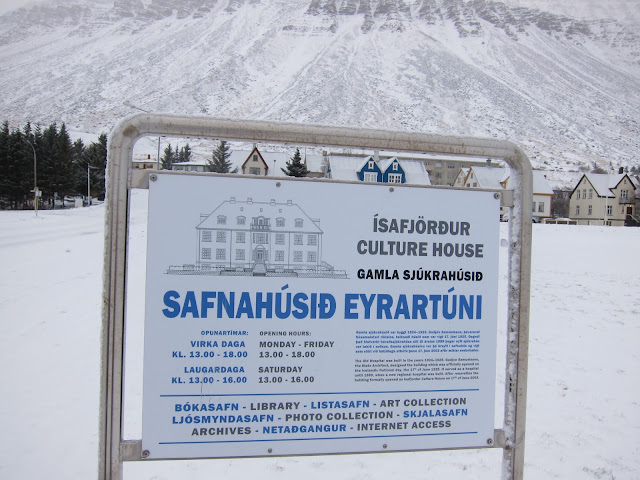 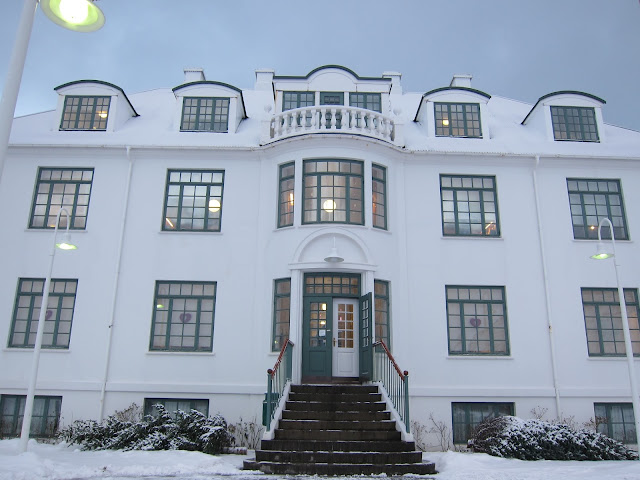 We arrived at 10:30am and had a fantastic lunch down the street from the library, then walked up to it at 1:00pm, right when it opened. I was pleasantly surprised to see a  wonderful collection of books on the first floor and spent much time exploring the layout and seating options. I was also surprised how many books have been translated into Icelandic. 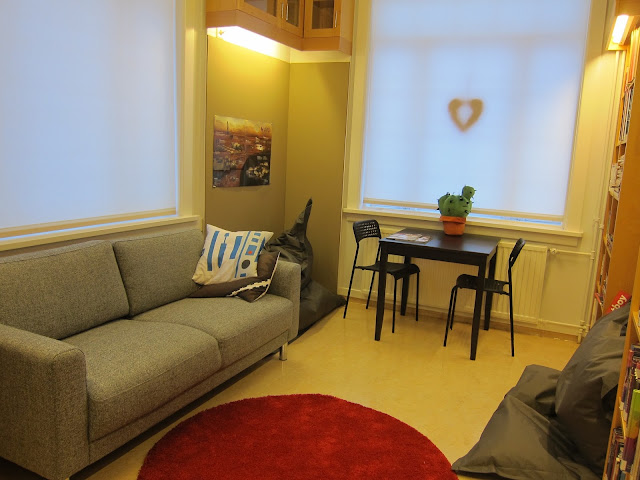 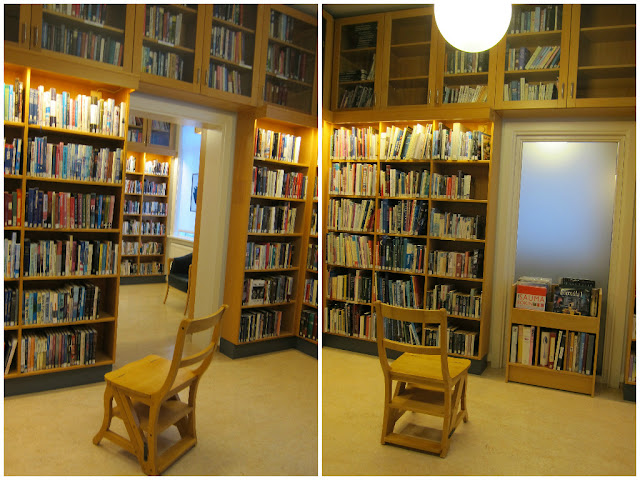 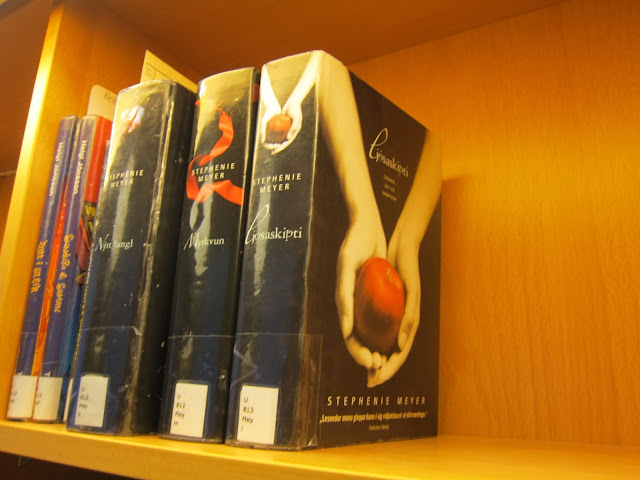 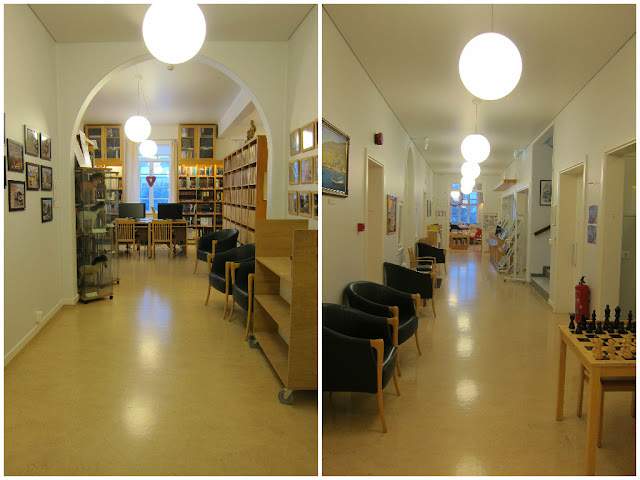 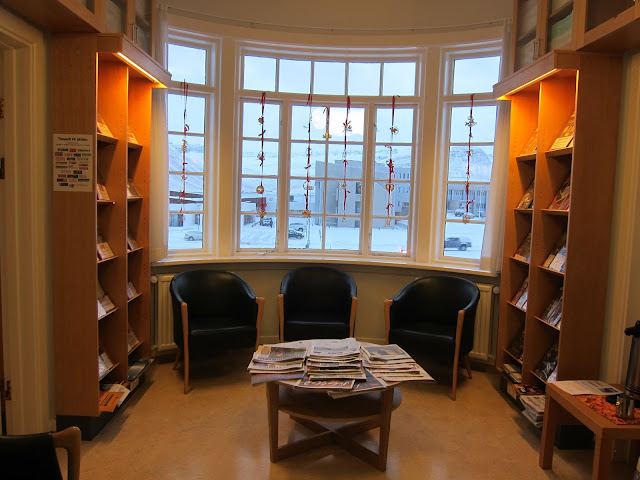 On the second floor there is even more open space and seating. There were a fair amount of meeting rooms and group-working spaces. The view and natural light was also much better from the second floor. 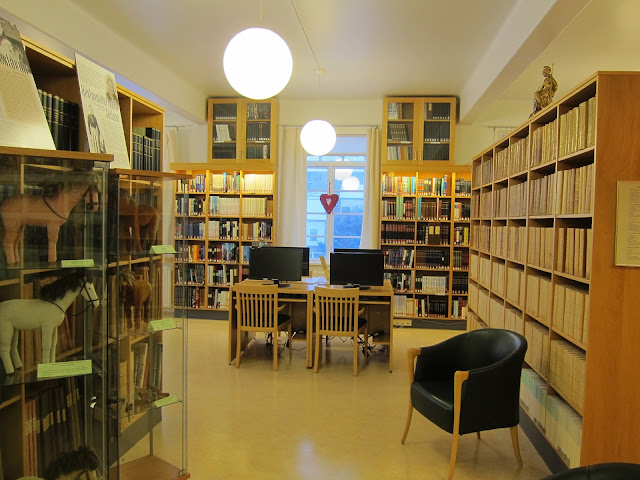 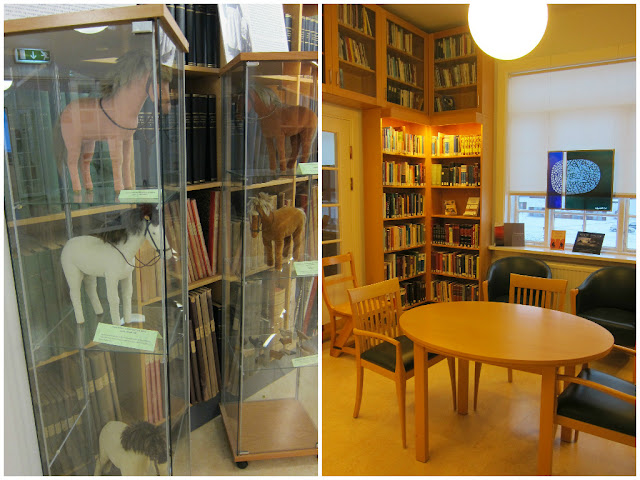 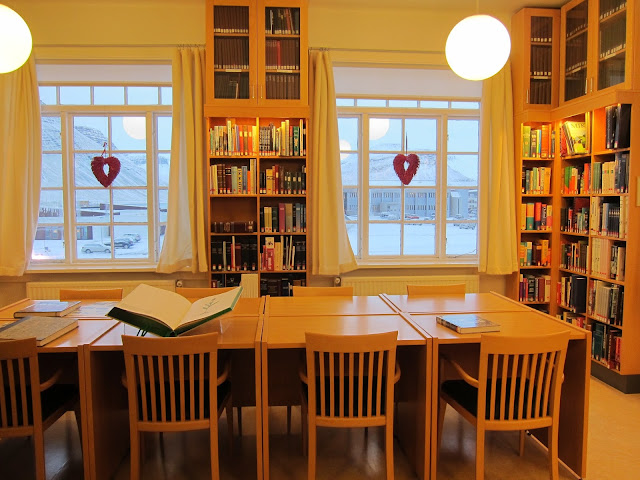 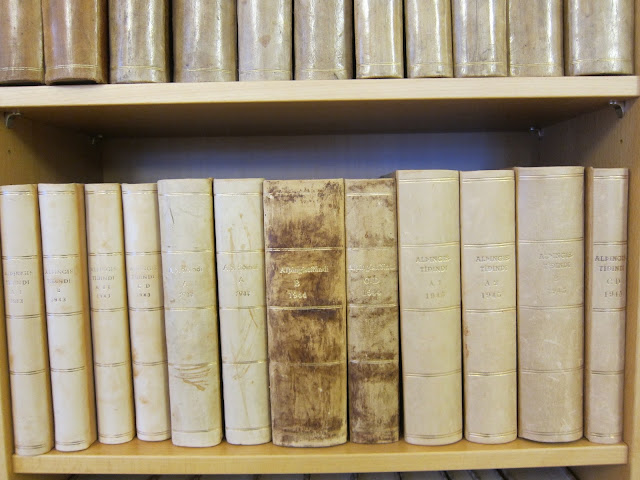 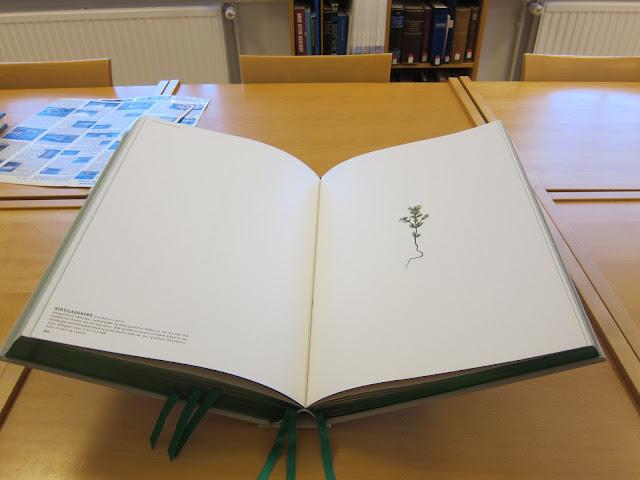 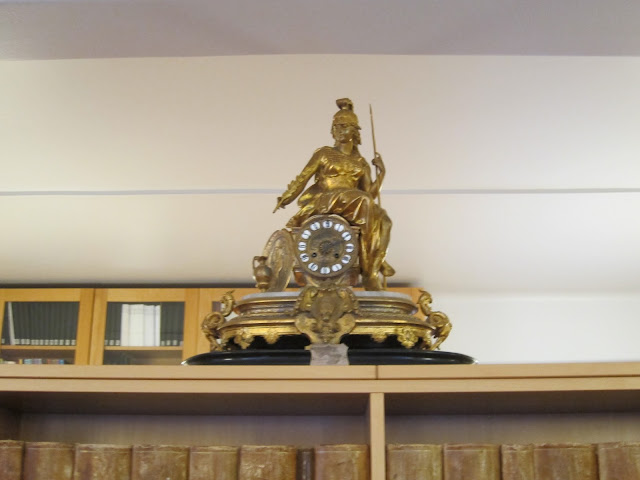 On the third floor was, curiously, administrative office and a historical exhibit of some sort. Apparently this building used to be a hospital and many cultural artifacts remain. Read a little more here and here.

My favorite piece was the wolf-doctor painting, followed closely by the creepy dolls. 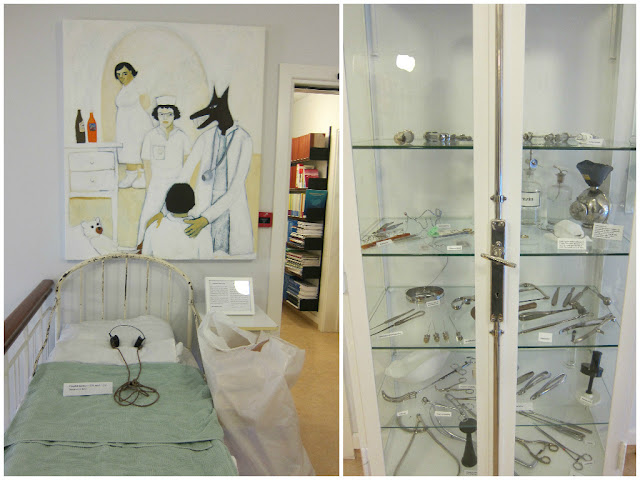 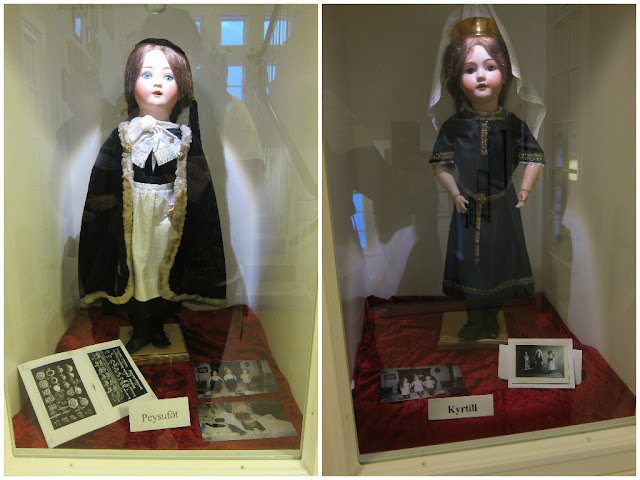 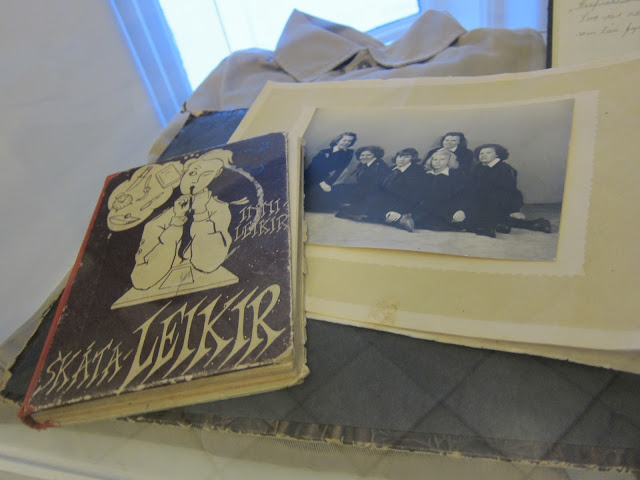 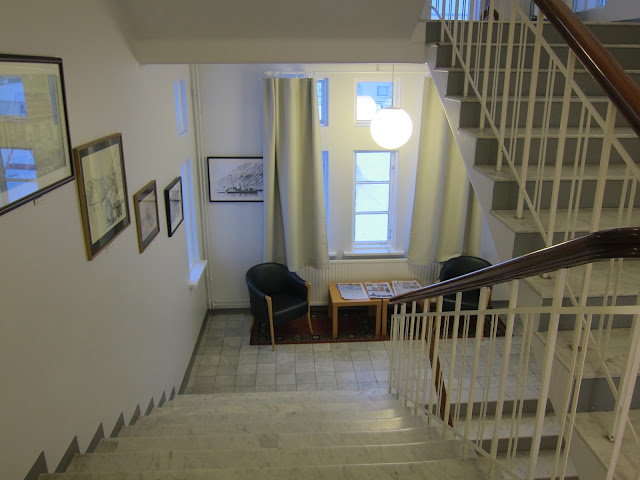 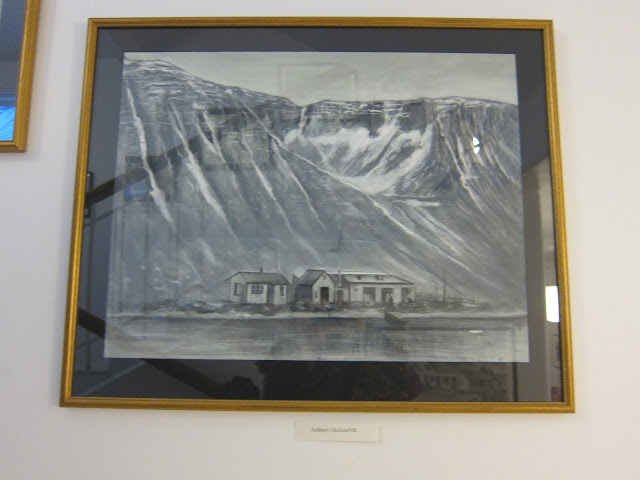 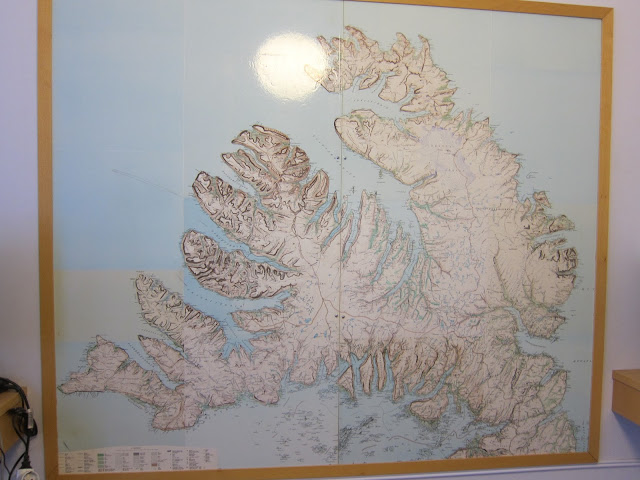 Later that day I was able to photograph the library again, after the fog cleared, and was able to get that perfect shot. 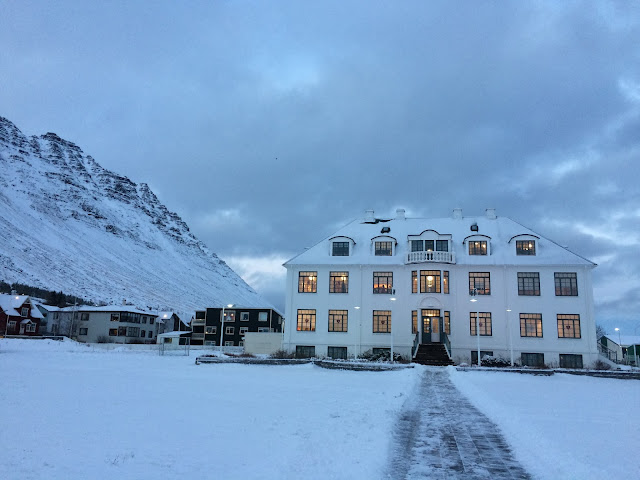 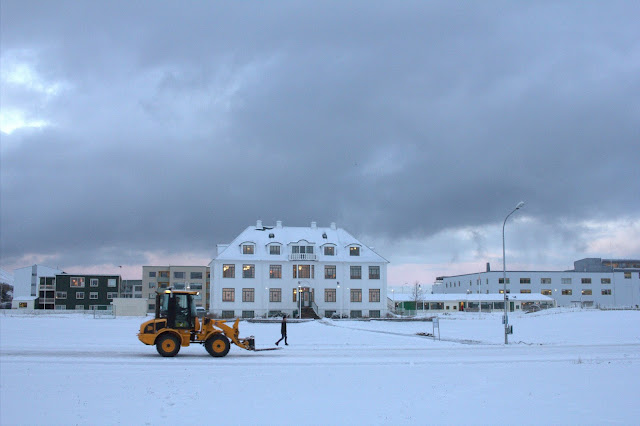 So, long story short, besides my near-perfect experience at the library, our flight was predictably cancelled and my one-day trip to Isafjordur turned into a three-day trip, in which I only had my toothbrush and the clothes I was wearing. So the library became my source of pleasure, and of mental breakdown as I was on the phone with Air Iceland trying to book transport out of the town. But was it worth it?