Myanmar is definitely among the most exotic places I have been. It is a feast for every sense, from the crumbling colonial architecture, to the unique dress of the men and women,  there is always something to behold in this great country.
I could list endless differences between Myanmar and say, America, but I have chosen to focus on the things I found most unusual and surprising, things I do not see replicated in other countries in SE Asia.

Clothing
Nearly everyone in Myanmar – men and women – wear Longyi, which was are basically sarongs. 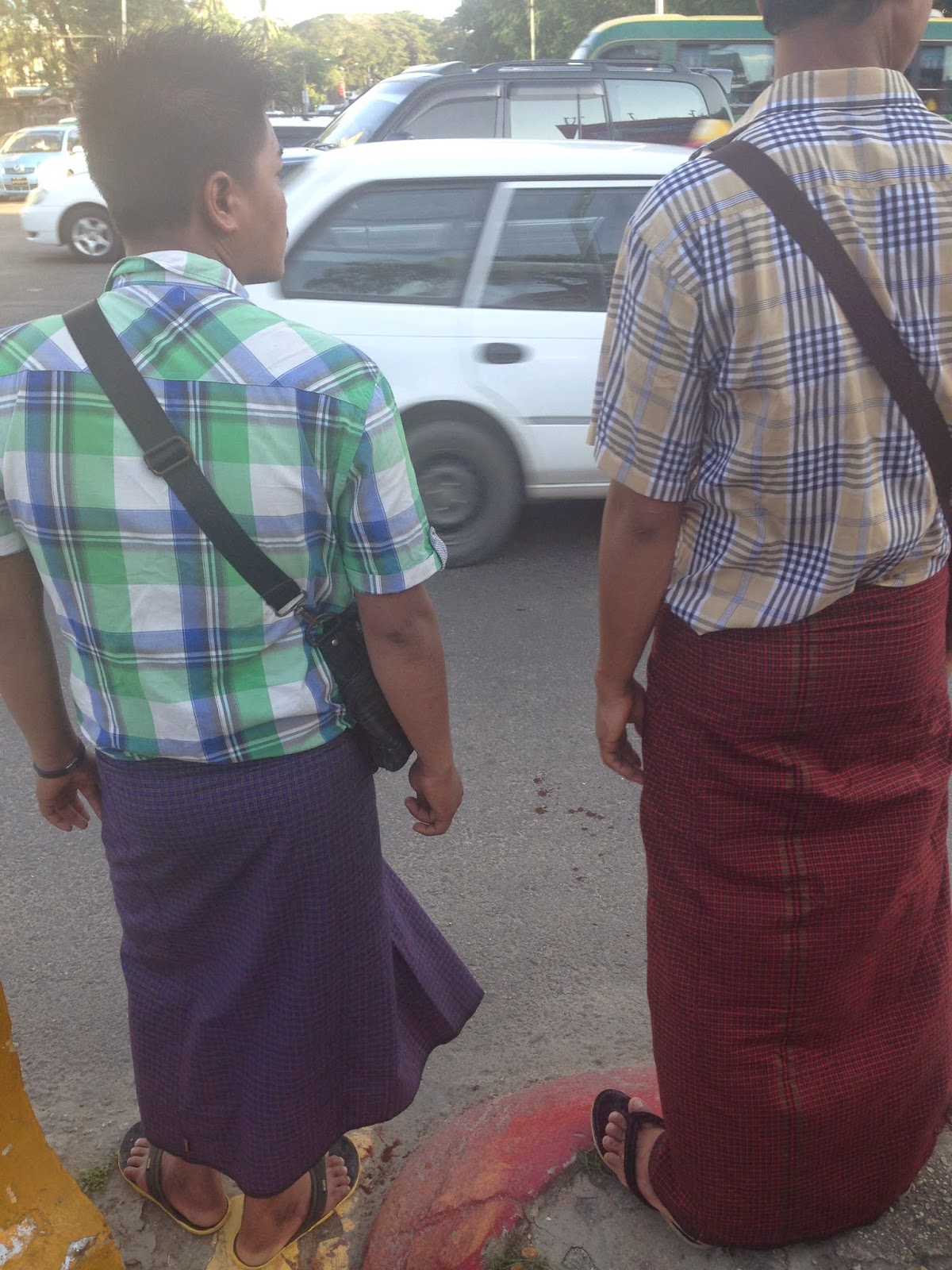 For men, they are almost always plaid, wrapped around the waist and tied in a not below the stomach. For women, they are cut and sewn into skirts which are fastened with ties at the waist. Patterns very considerably, but the goal is to match the longyi with the top.

Thanaka, the beige paint on the cheeks of men, women, and children,  is also uniqe to Myanmar and ubiquitous. This is said to help keep the face cool, as well as be healthy for the skin.

Beetlenut
It seems like almost every man over the age of 20 is chews bettlenut, a disgusting red substance which is chewed and spit out into the streets. It dyes the mouth and teeth red, giving the appearance of bloody gums. The pavements, covered with bettlenut spit – look like crime scenes with dried blood. Beetlenut has addictive properties that gives people a buzz, and is especially popular with taxi drivers. 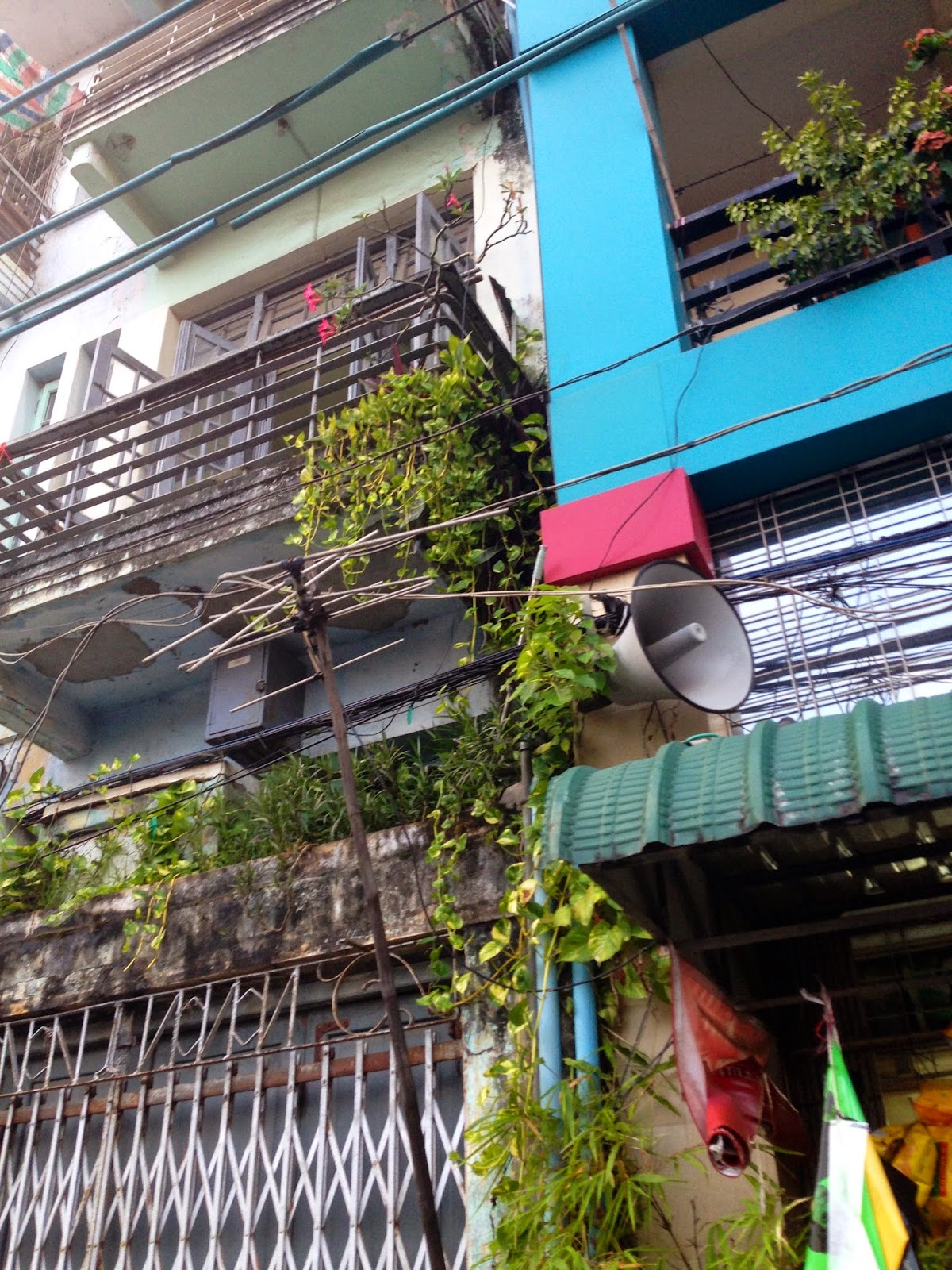 Megaphone
Nearly every street in Mynamar, from city to village, has a megaphone which emits sound nonstop. Sometimes these are announcements, sometimes news,  sometimes singing, sometimes chanting or prayers. Either way, it’s on 24 hours a day in most parts.

Overstaffing
Capitalism is new in Myanmar and there is a steep learning curve. Practically every restaurant and hotel I saw had a serious overstaffing problem. At most, our small hotel had 22 people in the lobby and behind the reception desk. Two would open the door, another two would greet you, three leaned against the wall with brooms, waiting to clean something. At least ten were behind the reception desk chatting with each other, and another five or so were in the hallway, also chatting. It is not uncommon to see a wait staff of 10 or so in a restaurant with only 5 or 6 tables. It was excessive to the point of being absurd. You may wonder, what are these people doing? Not looking busy, is the answer. Mostly chatting with each other and looking bored.

Are you ok?
I got this question a lot in Myanmar, especially from wait staff after delivering my food. I’ll be sitting at the table eating and a staff member will approach me asking, “Excuse me, are you ok?” At first I thought that I must look sickly, or perhaps I unintentionally gave a look that made it seem like I was displeased with the food. But then I realized that their English ability was limited, and what they meant to ask was, “How is the food?” or “Is everything alright (with the meal)?” When I realized this it was all very funny. “Are you ok?” is not something we ask of anyone who isn’t crying or hurt.
at June 09, 2015