Hakarl: Put it in me

Oh Hakarl. I first heard of the legendary fermented  shark about three months before I left for Iceland.
"Hey, are you going to try hakarl in Iceland?"
"What? Who's Carl?"

I soon learned that this Icelandic delicacy has been voted countless times  as the worst food in the world. Hakarl is basically a poisonous Greenland shark that is gutted and buried in gravel for 3-6 months before being consumed. I read numerous accounts of Hakarl sampling before my trip:

Needless to say, the hype was high and I was super excited to be inexplicably grossed out. However, from what I gathered I had little chance of being offended by this odious dish. First, I love fermented things (i.e. kimchi, fish sauce, natto), so why not fermented shark? Second, I love seafood in general. I've eaten all kinds of weird sea creatures in Asia, (not to mention endangered whale in Japan - sorry, it was delicious!) Third, I tend not to mind anything as long as it isn't alive when I put it in my mouth (oysters an exception).  So I pretty much entered into this whole experience thinking that the planet is just of a bunch of wussies and that I am more than capable of handling hakarl.

The next matter of affairs involved location. Where does one find hakarl? Is something so foul really served in major restaurants? After reading Meemalee's blog on Hakarl, I thought there was not better place to sample the dish than the quaint, grandma's attic-style cafe, known as Cafe Loki.

Below is Cafe Loki's Icelandic Braveheart plate. On the top is a dried fish jerky with butter, to the right is hakarl, accompanied by two different kinds of Icelandic bread with butter. In the center is a tall shot of Brennevin, a strong alcohol that is served with hakarl to wash down the unpleasant taste. 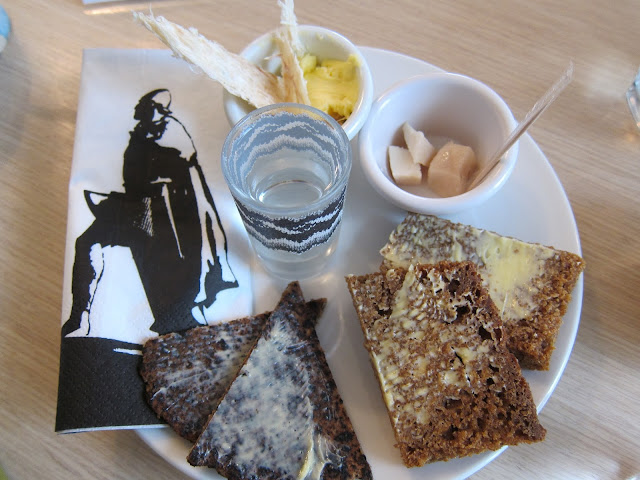 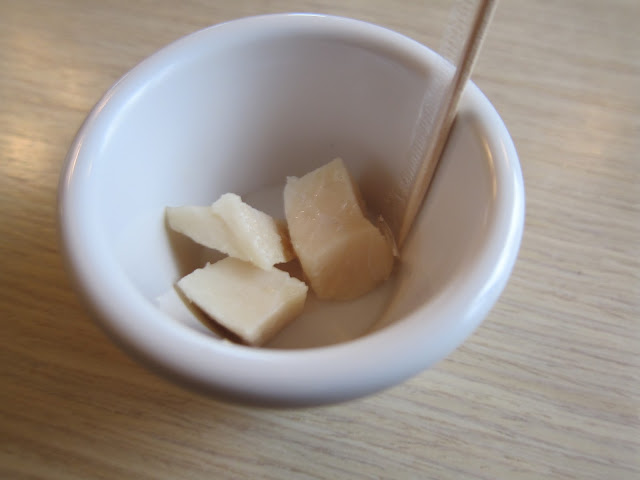 Brennevin aka "black death." Even the shot glasses in Iceland wear Icelandic sweaters. 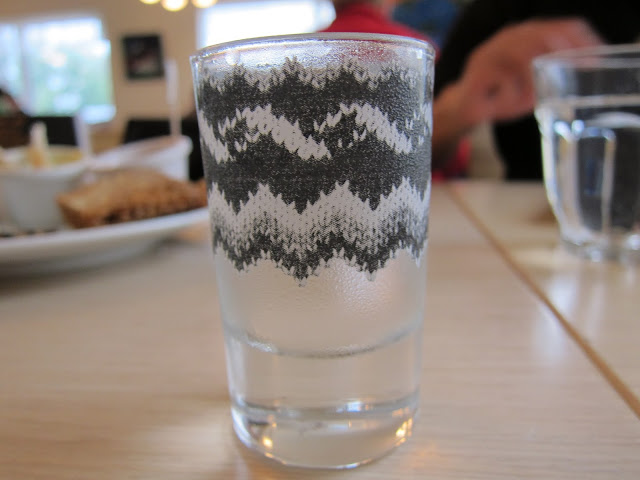 As the final moment approached I remembered my father's words before I left.
"I don't trust that shark. Let the man try the hakarl first...you know...just in case."

Hakarl vs J: Game on!


When asked off camera why he was not so repulsed by hakarl, he simply said, "Eh, I'm Chinese."
Touche.


So what does hakarl taste like? Well, there are many elaborate and poetic descriptions online, but I thought I give a more palpable account.
At first, hakarl doesn't taste like anything. Imagine sashimi (that's the fish on top of sushi). It has the exact same texture as raw fish, with practically no taste at all. At this point, you may find yourself disappointed, because you thought hakarl would be awful from the second it hits your tongue. Not so. Ah, but then you start chewing it, and man is it chewy. Then you swallow it. Everything seems find, until you're hit with an overpowering waif of ammonia. It's like you left sashimi in a bath of cleaning fluid, then forgot you did that, and put it in your mouth, only to realize what you've done once it's too late.
THAT is what hakarl tastes like.


All in all, it was not an unpleasant experience.
If we can do Harkarl, so can you! 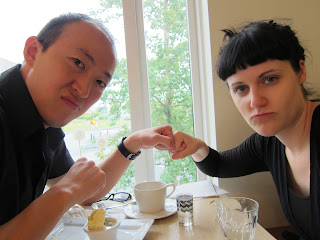