As I was organizing  some old files from my travels, I remembered that I kept a Livejournal while I was in Japan in 2005. At that time,  I was a senior in high school with almost three years of Japanese under my belt and no desire to go to Cancun for spring break.
I saved up money from my part-time job for almost a year so that I could buy the plane ticket to  Tokyo. This entire journal was written over a ten-day period, mostly from the public computer in the lobby of a traditional Japanese inn. Because of these circumstances, the entries were written in haste, with spelling and grammar complete forgone.


I left this text in its original format in order to preserve its authenticity. Although it is not particularly eloquent, nor does it necessarily represent my current thoughts or feelings, it is a honest account of a my first real experience abroad. When I read through it, I can vividly recall the earnest hopefulness I carried with me on my journey.


Thus, this is a relic of my first self-supported solo traveling adventure. In other words, this is where it all began....

I am typing this entry from the computer in my ryokan (traditional Japanese inn). It is amazingly lovely here. Just to see the signs in Japanese and ride on the opposite side on of the road brings me wonderful memories. My passions for this city have already been restored and I have only been here for three hours. Jonathan (my platonic best friend– UPDATE: who is now openly gay - that's worth noting later in the journal) is up in the room unpacking. I am so happy and relaxed but it was quite a journey to get here...

First of all, the airport line was insanely long. While Jonathan and I waited in the line we decided to review the list of items that American Airlines had instructed us NOT to bring.
Such items included:

Who even thinks of bringing such things on an airplane? However, Jonathan was pretty pissed that he could not bring his Axe spray, cause after a thirteen-hour flight, you must imaging he would be pretty musty...

The flight wasn't so bad after my Dramamine kicked in. I fell asleep for about four hours and spent the rest of the time watching the interesting people on the plane. There was a really cute little Asian baby sitting next to me, and since we were flying to Japan I figured she would be Japanese.
I started speaking to her mother in Japanese and she just looked at me and said in English, "We're Chinese."
"Ooops, ha, ha...uh…just kidding."

So then I  spent some time noticing a dapper gentleman on the plane. He was reading this queer looking book entitled "Whatsoever Things are Lovely," and one of the chapters in the book was called "Dayspring." If that isn't gay then I don't know what is.
That is all I remember from the flight. That and Jonathan yelled "Fuuuuuck!!!!!" in his sleep. And I had a strange dream that our plane landed in Calcutta instead of Tokyo. Well it's over anyway. I'm here and that's the point. 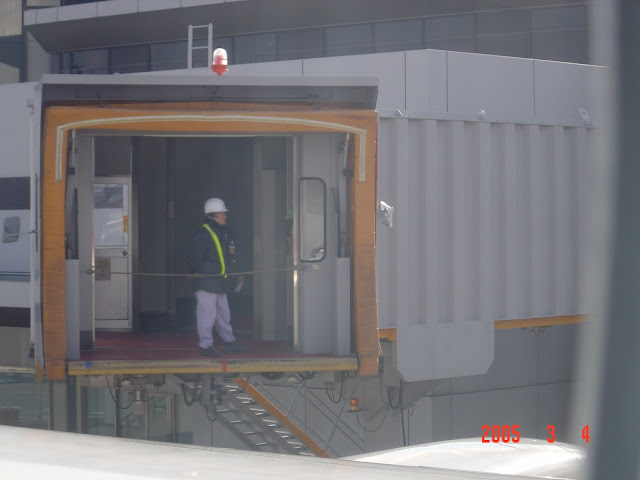 The arrival gate; our first view of Japan.

After getting off the plane we went to meet Amasawa-san and Iho Chan (family friends) but we could not find them. Jonathan hoped that they would be carrying a sign with our names on it but that didn't exactly happen. We looked for like, 30 minutes. Then we asked the airport ladies to page them. Then Jonathan came on to the airport ladies by asking, "So what are you fine ladies doing after work tonight?" This is going to be a long trip. 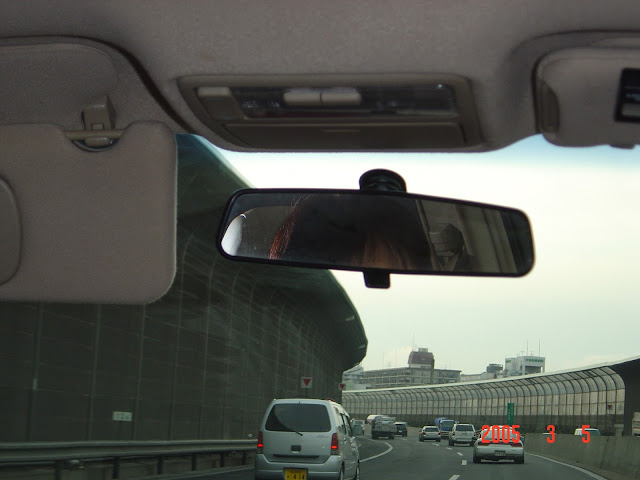 Mrs. Amasawa driving on the opposite side of the road.

Well, we found Amasawa-san and Iho-chan (After 45 minutes and no dates with the airport ladies) and they drove us to our ryokan. I was surprised to find it in a relatively quiet part of Tokyo. We are somewhat wedged in between several stores on a very tiny street of the Meiji Dori. Our ryokan is quite lovely though. As a traditional Japanese inn we have no beds, but we sleep on tatami mats. Our ryokan is a mixture of modern architecture juxtaposed with traditional antiques which makes for a visually pleasing appearance. Our room is small and dimly lit, but it has a true Japanese feel to it. 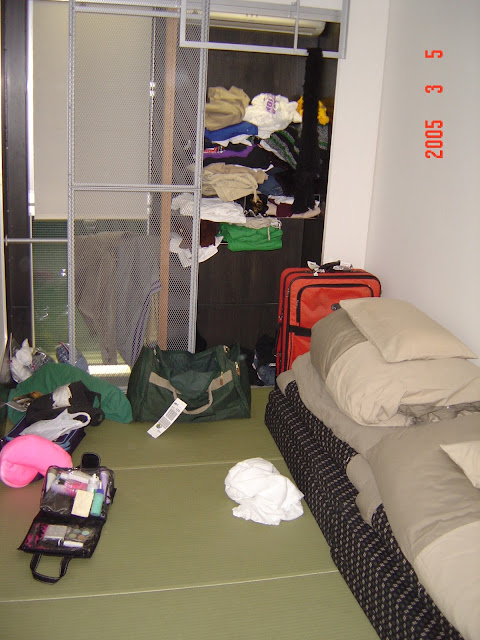 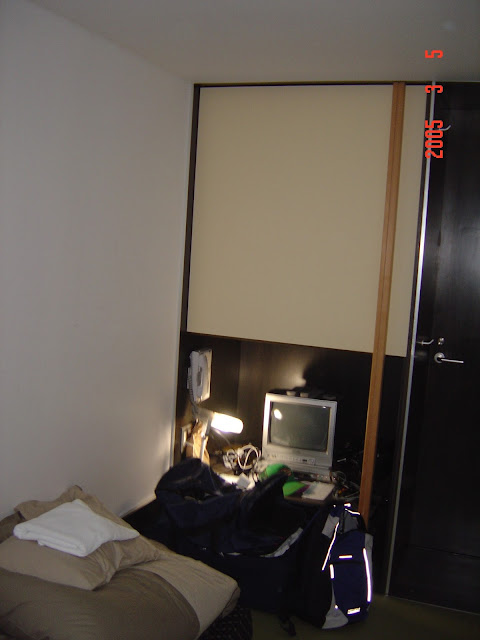 After preparing our room we had tea with the hostess of the ryokan, Yuki. She is very friendly and her English is almost perfect. In appearance and manner she reminds me of my old friend Kana, so I feel very comfortable speaking to her. That kind of service would never happen in an American hotel. I am about to go walking around Taito-ku (our location within the city) and find a Makudonarudosu (McDonalds.) Teriyaki burger here I come! And so begins my journey...