If you're confused, you ought to go back to Part 1.

Yesterday was seriously one of the best days of my entire life. Here goes:

Shortly after writing my last entry, Jonathan and I headed out early for our first stop: Shinjuku. We were going to see my Buddhist temple. I wasn't to worried about having to take the subway system because I was told that everyone spoke English and could help. As I found out, that could not have been a bigger lie. No one speaks English. No one. If it wasn't for my Japanese skills and Jonathan's intuition we would have never made it. We still didn't find my Buddhist temple, but we made it as far as the station. We asked everyone, in Japanese. No one could help us. So we found the only white person within a 5 mile radius and asked him. He was a college student from Georgia. Jonathan told him we went to Rice University and he was like "Wow you guys must be really smart!" I laughed.

We gave up on finding my Buddhist temple and instead went to Harajuku for some shopping. It was amazing. We saw the same German guy that we met at McDonald's that previous day. I guess this is a small city after all. 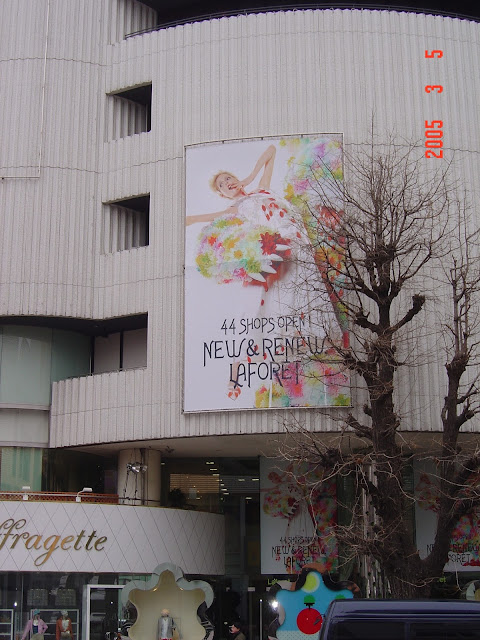 There was a department store called the Laforet. When I become a famous fashion designer in Japan my store will be at the Laforet. Jonathan freaked out because he saw a t-shirt in one of the stores that had a marijuana leaf on it that said " Have a Wonderful Time." He has now become marijuana obsessed and has begun his search for "The best toke in Tokyo." Well, after that we went to the Meiji Jingu shrine. 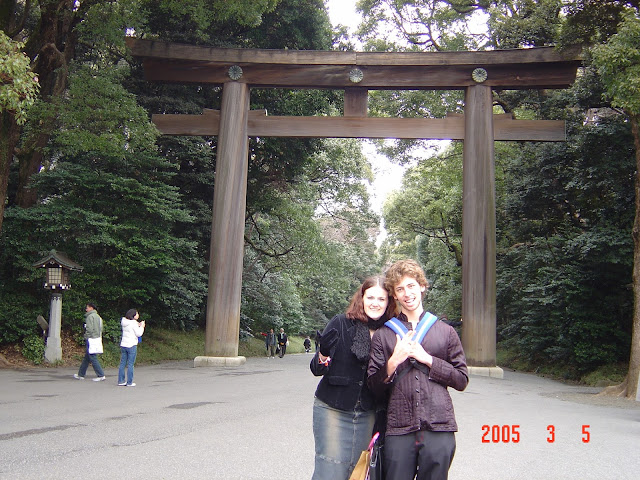 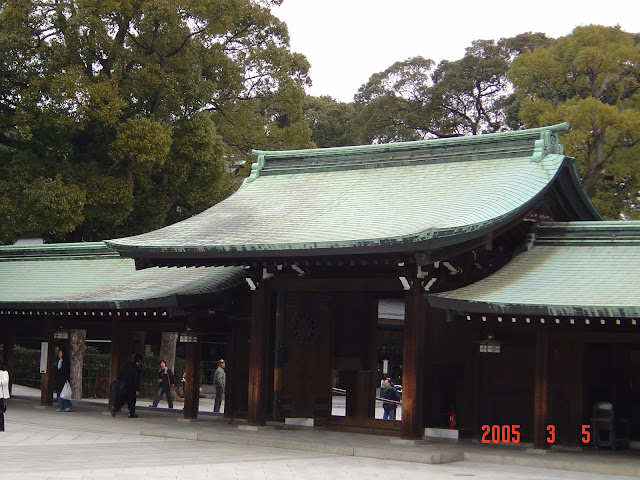 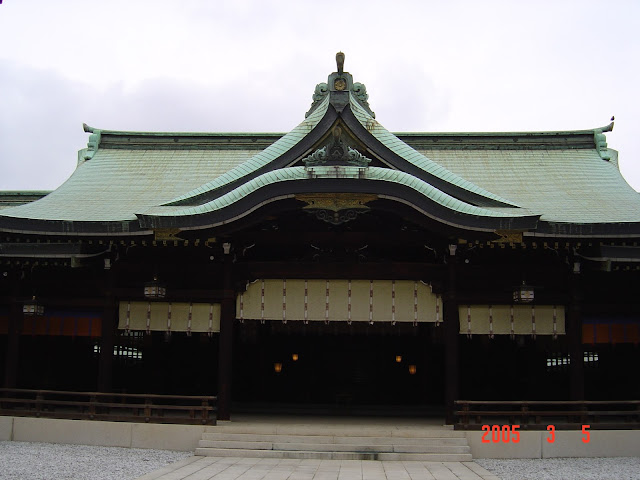 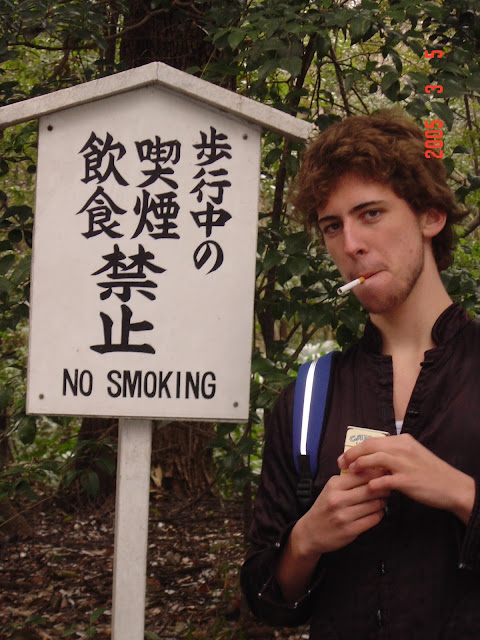 After smoking in McDonald's, Jonathan was insistent on smoking everywhere.... 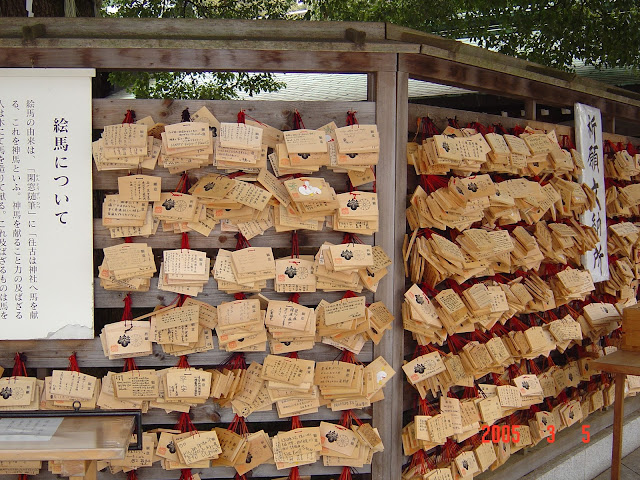 These wooden blocks are called "Ema." They are peoples' wishes. In 2005, I had no idea what they were, but by 2010 I would return to Izumo, Japan for the precise purpose of writing my wish on the Ema. 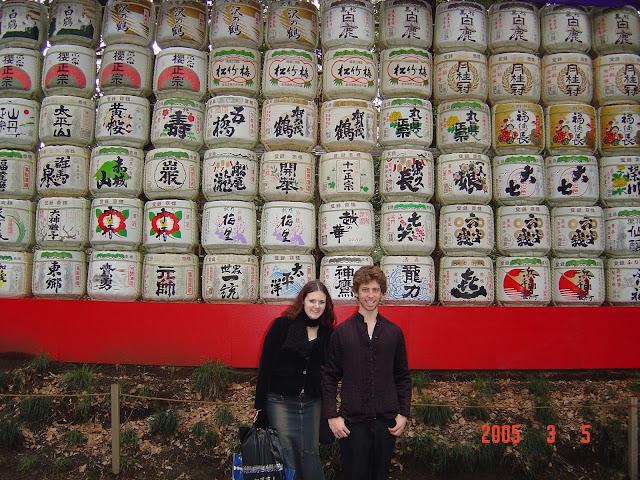 These are beer barrels. I think we knew that at the time. That is why we were smiling.

And something happened that changed our entire day...
Some Japanese girls asked in English for Jonathan to take their picture. When he replied in Japanese they were very impressed. We started talking about all sorts of things. Jonathan asked if they liked Karaoke, which of course, they did. And then he was like, "well we should all go to Karaoke today!" I though they would be freaked out since we were total strangers but they we really excited. 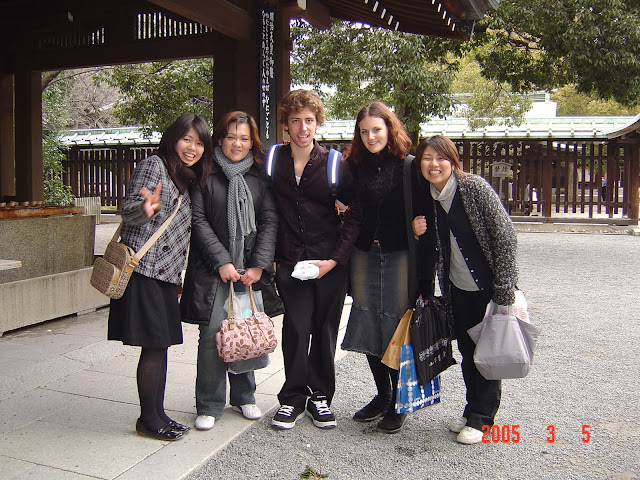 We explored the rest of the Meiji Jingu Shrine with them and while doing so I saw that there was a traditional Japanese wedding procession going on. I desperately wanted to take a picture of the bride in traditional Japanese wedding kimono. I was afraid to ask because, I mean, they were having a wedding, that might be rude to interrupt. But Jonathan said I was never going to see them again so I might as well embarrass myself. I spoke in my most humble Japanese and when I thought I was going to get an ass-whooping the bride’s Mother-in-law laughed and said, IN ENGLISH, "well, come get in the picture." So there I am with the bride, the groom, and the wedding guests, right in the middle of the picture. Amazing. 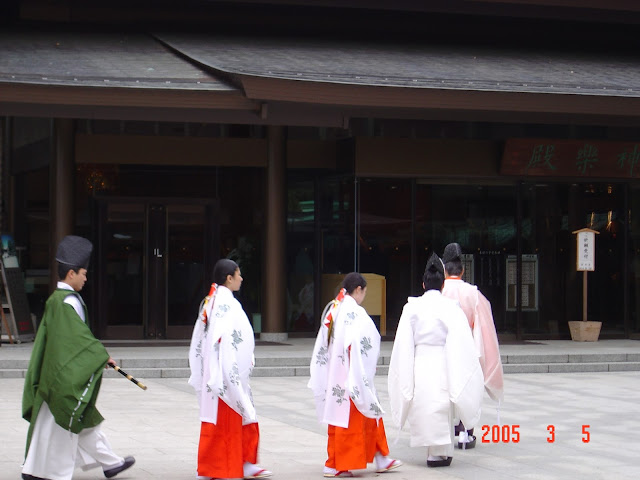 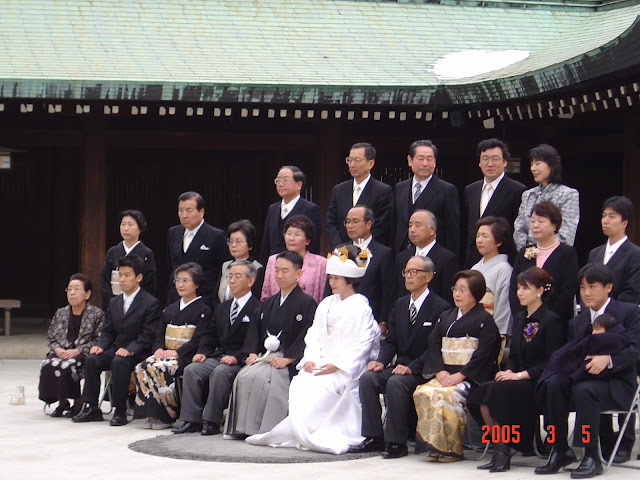 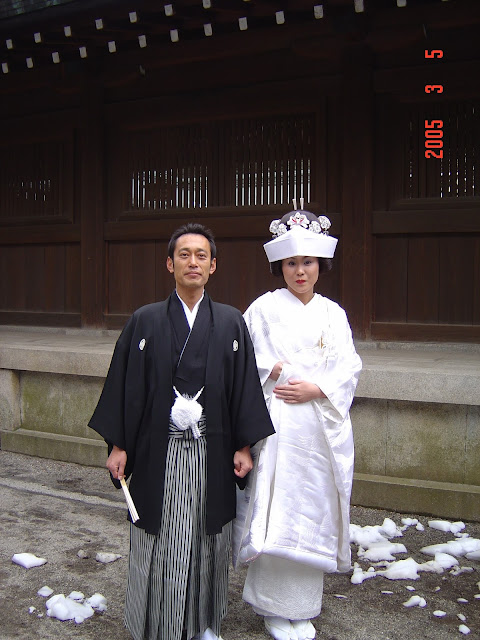 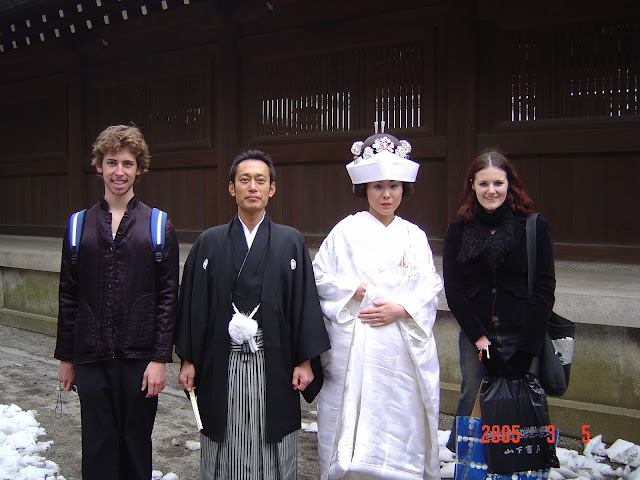 After that the Japanese girls whose names are Megumi and Mariko wanted to eat at a sushi bar with us.
They spoke good Engish, so between their English and my Japanese we communicated very well. 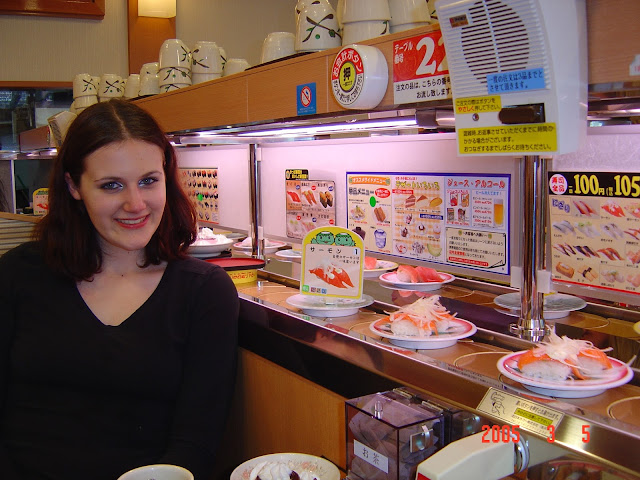 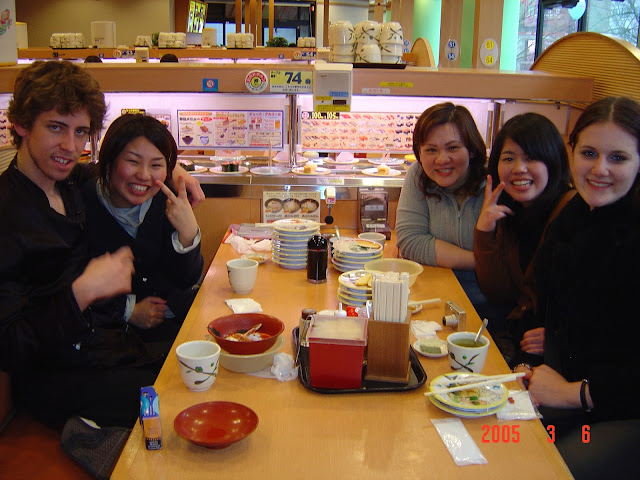 So we had lunch with them and then we all went to Karaoke! It was so much fun! Especially for me because they had Bjork songs! Good times. 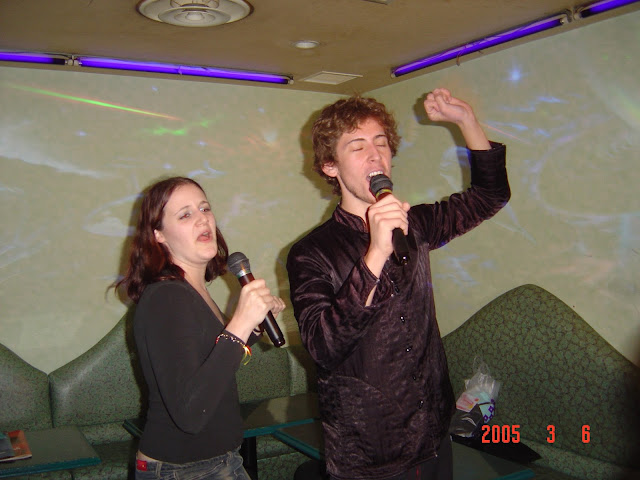 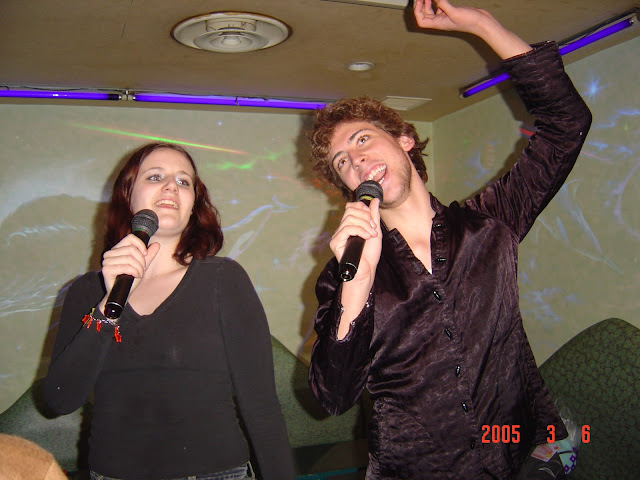 "To the windoooooow, to the wall" 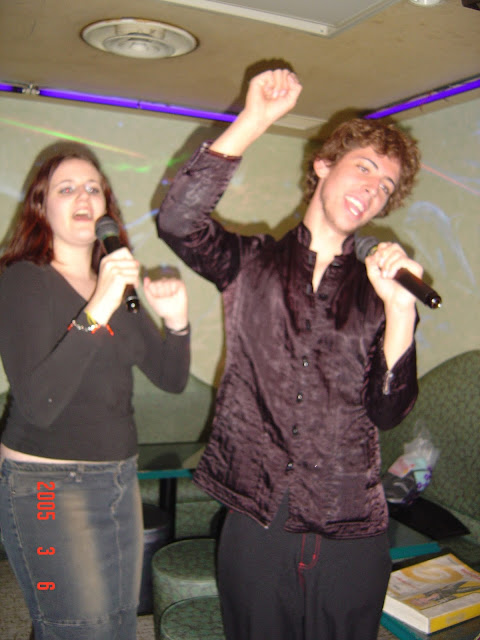 Or it might have been the Ma Ya Hi song...


Then we all headed down to Shibuya and did some more shopping. Jonathan saw more marijuana paraphernalia and freaked out some once again. He even asked the sales people if they knew where to get weed. Poor Jonathan. Anyways, our new friends are so nice. We all went to eat Takoyaki later that night.

I feel very special to be hanging out with them. In Tokyo I feel like such an outsider, for obvious reasons, but I want so badly to belong. Of course I want to be accepted by the Japanese people, since I want to live there. Before meeting my new Japanese friends I felt like I didn't belong in this country. I felt like nobody in this country liked or understood me. But now I have real Tokyo friends. Sure I just met them yesterday, we're not close at all, but they accept me. It felt wonderful to walk down the streets of Shibuya linking arms with Megumi, laughing loudly with Mariko. I felt like I was one of them. I'm sure some Japanese thought it was weird that native Toyko girls were hanging all over two foreigners, but I don't think Megumi and Mariko cared.
Speaking Japanese with my native Tokyo companions, eating Takoyaki, going to Karaoke. Its all such a wonderful dream. I feel like I am living a small piece of my future right now.

(Update: I am  STILL friends with Mariko. Can you believe it?)