Part 5: The best toke in Tokyo


If you're confused, you ought to go back to Part 1.

**Due to the lack of time I had when writing this entry it has been updated, finally, with the rest of the info.

So finally Jonathan and I got off our asses and went to Shibuya. Man, we have dominated the subway system of Tokyo in two days. See, it’s really different from other major cities because the subways are operated by multiple companies, therefore the routs are confusing and you have to change train lines for different stations. Jonathan is really the one who is good with direction. So in a way we need each other, him for direct, me for Japanese. If I can conquer this city’s public transportation system then I can conquer anywhere.

In Shibuya, I did a little shopping of my own, but nothing too amazing. Jonathan went back to the head shop he found last night. He was really excited because as he says, "If this is indeed a country, there WILL be a head shop." So apparently this is a country. He bought two cheap grinders. That made his day. And since the shop was not busy he went out and had a smoke with the guy that worked there. He is in college for photography. He says that not a lot of people smoke weed in Japan. Yeah, we all had a long talk. He was pretty cool. 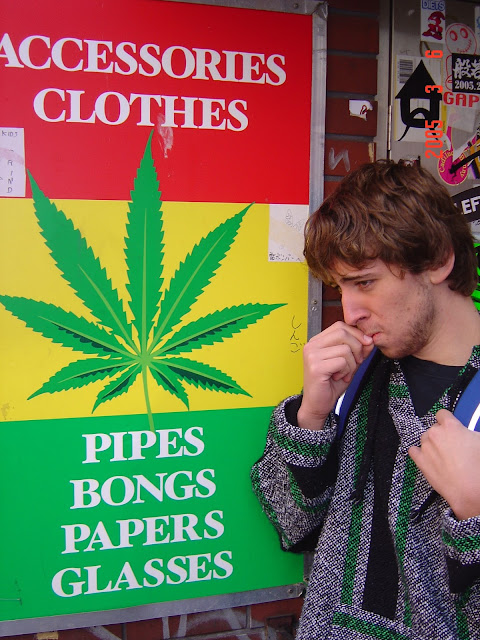 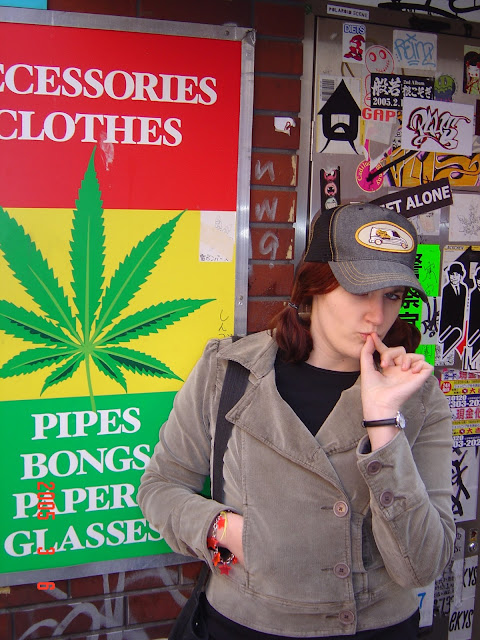 Despite the omnipresent marijuana leaf motif, it is extremely difficult to find marijuana in Japan, due to it being illegal and all.

Then we went to Ebisu. We saw a beautiful garden downtown but unfortunately the Beer Museum we wanted to see was closed. Oh, the best part of the trip: we went to 7-11. But 7-11 is very different in Japan. It is all Japanese food (they sell a great deal of pre-packaged food) and products and some American products with a twist. Like Green Tea flavored Kit Kat. It actually tasted kind of good. 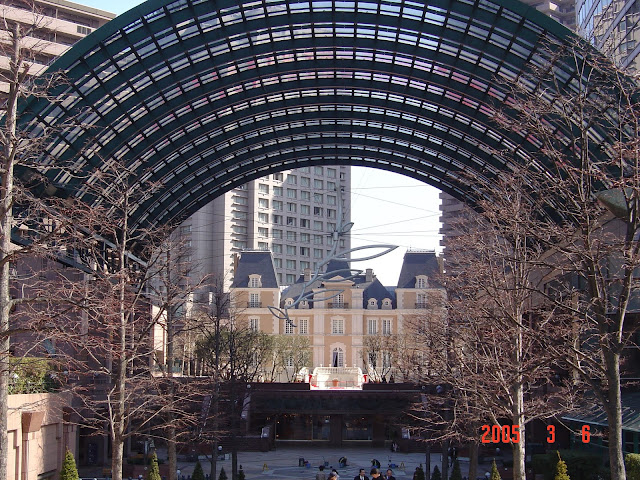 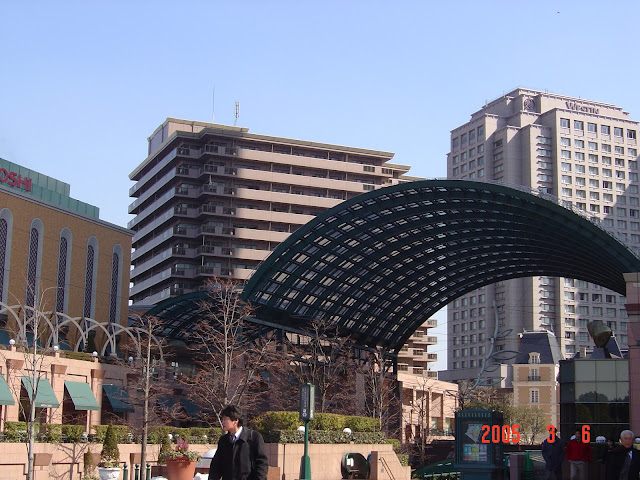 So we got back to our ryokan kind of early to see our hostess Yuki. Then she told us where to find Mister Donut and our day gained a whole new meaning. See, Mister Donut is 100 times better than any American donut place because they have strawberry donuts. And they are open until midnight. So Jonathan and I walked 30 min in the freezing cold to get there. But I will admit, the journey was half the fun. We got lost a few times, no, more like a lot of times. But by getting lost we discovered a traditional Japanese food market, a playground, two Buddhist temples, and the red light district of Asakusa. There was a bar there called "Bar Dute" Say it aloud. That makes me laugh. Then we found Big 8 Strip Theatre and numerous gentleman’s clubs with names such as, "Silky Doll," "Alone," and "American Crystal." That was definitely the best part of the trip. And at the end we reached Mister Donut.

Our ryokan is located in Ueno, which as I discovered is a pretty quiet part of Tokyo. Walking down the streets at night one would not feel as if they are walking through the biggest city in the world. It has a very peaceful, residential feel to it. Asakusa, which is right next to Ueno, is just sleezy. It’s the Oakcliff of Tokyo only with no Cadillacs or crackheads. Shibuya, and Harajuku are so metropolitan. This city has so many different faces. It is unbelievable.