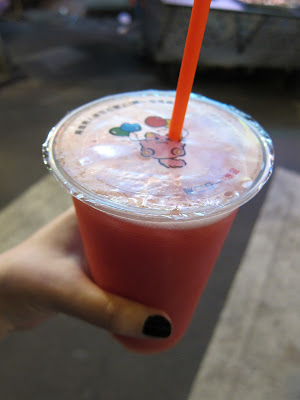 Let's take a break from Dubai for a moment and take a trip to the other side of the world. My disclaimer is that this post is not about the watermelon drink, which is, by the way, both delicious and plentiful in Taiwan. This is a story about two girls, a 15-year friendship, one near-death experience, and what it means to live life to the fullest.

So what does the watermelon drink have to do with this? Well, when I was a teenager, I went to an all-girl private boarding school. The very best friend I ever made in that school was a Taiwanese-Japanese girl (meaning that she is a Japanese citizen of Taiwanese decent). Many a time she would enchant me with  stories of both Japan and Taiwan, and one food item in particular that I could never forget: "the watermelon drink." This mythical item kept me day-dreaming throughout my teenage years.

"If only I could go to Taiwan and have the watermelon drink..."

Such was the story of my life.

But alas, it took ten years to make that dream a reality.

It's not that money or time was the issue. I had managed to make it to Japan every year, and in 2007 I even made it my goal to visit a different country every year. But, for some reason, Taiwan kept getting shelved. It seemed like whenever my friend had time, I didn't, and whenever I had time, she didn't. We kept putting it off, saying, "next year we're gonna go, next year."

Then, in July of 2011, my friend was diagnosed with Hodgkin's lymphoma. She courageously began blogging her story, which you can read here.
This was a huge wake-up call for me.
We're not going to live forever.
There may not be a next year. 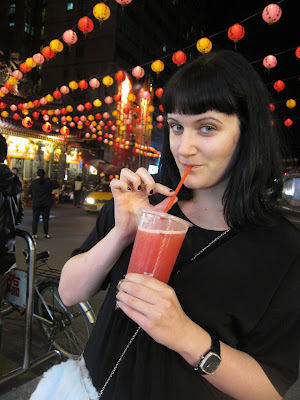 I remembered all those times in my life when old (or older) people would tell me, "take it easy, you have plenty of time." I suddenly became very angry at them for saying that, like they were just lying to my face. The truth is, as we all know, some of us have more time than others.
My friend ended up having to take a leave of absence from graduate school and move back to Japan for treatment. I promised her that when she got better, we would celebrate with a watermelon drink. For months and months I followed her blog from chemotherapy to radiation.

About 9 months after she was diagnosed with cancer and began treatment, the two of us went to Taiwan.

She was tired, sick, and her hair was just starting to grow back.
I was anxious, overweight, and going through a quarter-life crisis.

Because we didn't have time to wait for perfection, when our lives and our looks are exactly the way we want them to be. When we have all the time and all the money. When we feel good inside and out. That perfect time in one's life to drink the watermelon drink may not come so soon.

Now I'm back, with another item on the bucket list crossed off. And I am happy to announce that my friend is  back in the states, and cancer free.

As for those perfect moments in life, I'm not saying they won't come. They'll come alright. But when they come, I won't be waiting for them. I'll be in Taiwan, not far from the watermelon drink, doing what I love.
at May 02, 2013