Welcome to My Shimane Guide!

This little-known, little-explored prefecture is a sight for all types: the  savvy traveler, jaded with the beaten path in Japan, the twenty-first century romantic, seeking isolation and adventure, the cultural nomad, on a quest for novelty and quiet excitement.

My first experience in Shimane was when I traveled to the  Izumo Taisha via the overnight train from Tokyo. Since that time, I felt a special connection to this prefecture, and I am honored to have had the opportunity to spend a year living in Kawamoto, Shimane, a town of 3,000 people. During that year, I was able to travel around the prefecture nearly every weekend. I also met many local Japanese people who took me to places I would not have been able to find on my own. I decided that I want to share the wealth of knowledge I acquired, so that any English-speaker thinking of traveling to Shimane on their own will have access to the same resources, or, at the very least, be able to learn about a part of Japan that eludes even the Japanese.

Shimane 101
Shimane is the least densely populated prefecture in Japan. The local industry is largely agricultural. With more and more young people moving out of Shimane to find work in the cities, 1 out of every 8 houses in the prefecture is abandoned.

Shimane occupies a long stretch of coastline on the Sea of Japan. Most of Japanese’s major cities  (Tokyo, Nagoya, Osaka, and Hiroshima) are located on the Pacific Ocean side. For those who do not know, there is a big different in climate from the Pacific Ocean side (call Sanyo) to the Sea of Japan side (called San-in). San-in weather is extreme. Winter is distinguished by long months of snow and little sunshine.

Since 2014  Shimane has slowly been picking up traction because  Princess Noriko of the imperial family married the son of the head priest in Izumo Taisha, and now people from all over Japan are making the pilgrimage there. When I first traveled to the Taisha in 2010, Izumo was a ghost town. When I returned in 2014, it was a bustling tourist destination. My photographs of the town and train station are now sadly outdated, and will live forever as a time capsule on this blog. It is likely, too, that this guide will soon be outdated and serve as nothing more as a artifact of a particular place at a particular time.

I'm breaking this guide up into sections, starting from east to west. Click on the links below to check out each place: 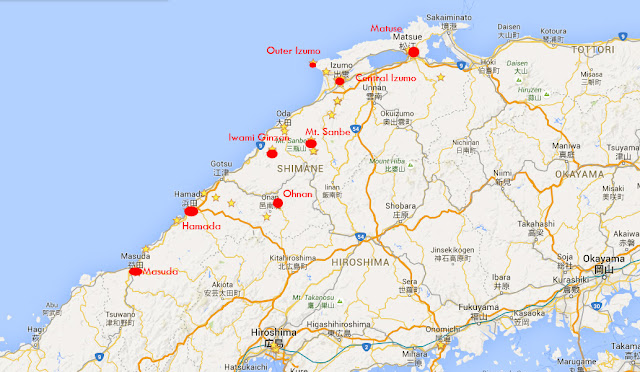 I would also like to promote other English-language bloggers in Shimane, and I will be providing links to their blogs, in various posts.
For general Shimane Information I recommend these website:

More Glimpses of Unfamiliar Japan: a photoblog from one a long-tiem resident of Shimane
Iwami Travel: travel information in English
Made in Matsue: an in-dept website about all things in Shimane's Capital city

Other articles about Shimane's strangeness:
Read about our snarky mascot here and here.
Women apparently have the best skin in Japan.
Another account of the night train to Izumo.
at September 19, 2015